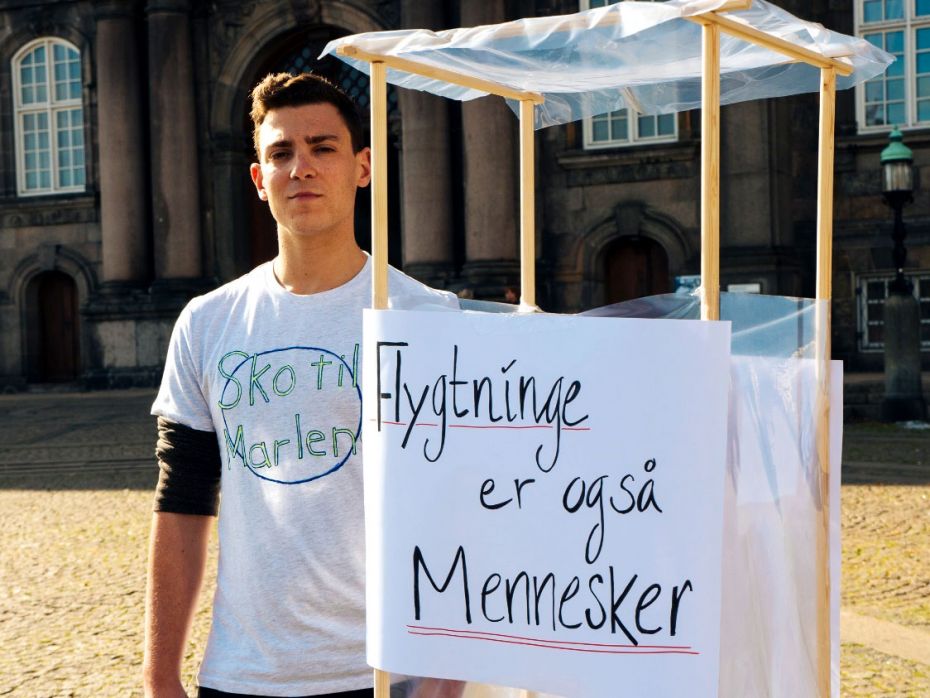 Vince Libasci, a student at the University of Copenhagen wants to fight what he perceives as a xenophobic agenda in Denmark. He is collecting shoes for the Danish People’s Party (DF) politician Marlene Harpsøe

“Give migrants a pair of sneakers. If they can walk up here, they can also walk home.”

The suggestion was made by Marlene Harpsøe, an MP for the Danish People’s Party, from the rostrum at the party’s annual convention, in order to solve the refugee and immigrant crisis in Denmark.

Vince Libasci who is doing his master’s in Global Development at UCPH, found her point of view provocative and inhumane.

Protest in front of parliament

He has started a campaign called ‘Shoes for Marlene’- He started collecting shoes 1 October in front of parliament, with the purpose of combatting xenophobic discourse.

All shoes that are donated will be handed over to the Red Cross at the end of the month. So far, people have given everything from sneakers, high heels, slippers and baby shoes.

The mother of the baby writes on the campaign’s Facebook page:

“Dear Marlene, is it also people with this shoe size you see going back to Syria?”

According to Vince Libasci the shoes have a symbolic meaning:

“We are all people with an equal right to feel safe, have a home, access to food, clean drinking water, education and healthcare. There are people who have lost everything for reasons beyond their control. In the West we are privileged because we can live in safety. But this does not mean that we should stop others from being safe. It is not just about Marlene and the Danish People’s Party. But about trying to walk in someone else’s shoes and seeing the world in a wider perspective,” he says.

The shoes also serve as a reminder that although the xenophobic agenda is gaining ground throughout much of the Western world, there are still many people who willing to challenge this trend.

“We are fed up with xenophobic rhetoric about lazy immigrants stealing our welfare. We want to spread the message that this rhetoric is not okay. We want people to know that it’s not the only message out there,” says Vince Libasci.

He believes that this agenda has also begun to sneak into university.

“We see that the government wants to cut the Danish SU study grants after they have blamed international students for being ‘SU-tourists’ stealing the grants. When it comes to education, there should be no discrimination between international and Danish students,” he says.

If you want to donate your shoes, please contact Vince Libasci on skotilmarlene@gmail.com