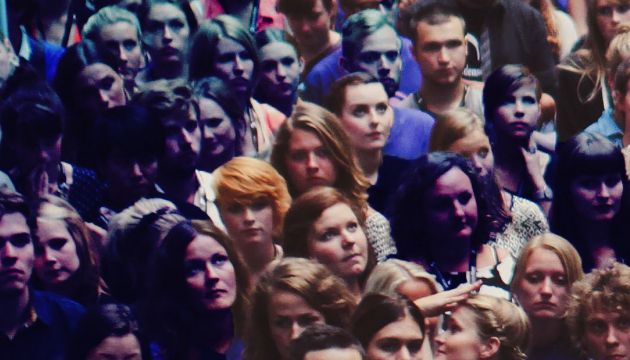 The girl or guy sitting next to you: How are they doing? And how about yourself ? New study reveals that more than half of students have a daily life marked by stress
image: Adam Garff (manipulated photo)

Every second student at the University of Copenhagen has experienced sleeping problems and difficulty with their concentration, while every fourth student has been afflicted by depression within the last six months. This is according to a new survey by the Danish Association of Masters and PhDs

Memory and concentration problems, heart palpitations, tension headaches and increased irritability or aggressiveness. These are some of the symptoms of stress that students from the University of Copenhagen (UCPH ) mention in a large, new study from the Danish Association of Masters and PhDs that examines Danish students’ general well-being.

The study paints a bleak picture of UCPH students’ mental health. 21 per cent, representing one in every five of the nearly 300 respondents, say they felt stressed much of the time during the last semester. 52 per cent of respondents struggle with insomnia, while 50 per cent experience memory and concentration problems, and one in four felt depressed.

The study confirms the results of a large employee satisfaction survey at UCPH in 2013 that showed that nearly half of the students are stressed in everyday life.

At the Faculty of Health and Medical Sciences at UCPH people are well aware of the problem with stressed students. In 2014, a satisfaction survey revealed that students of the faculty were more stressed than other students at the university.

“About 49 per cent of students experienced symptoms of stress in their daily life, and even more experienced stress symptoms up to their examinations. In our counselling sessions with students, it is often revealed that they maintain high expectations for themselves. After the Study Progress Reform was introduced, students have felt more pressure, and there are more students who have sought dispensation. So this is something that has had an impact on many students’ everyday lives,” says study and career counselor at the Faculty of Health and Medicine Freja Dalsgaard Olsen.

One in four have sought help

Chairman of the Danish Association of Master’s and PhD students group DM Gry Reiter, who is about to complete her master’s in rhetoric, has seen several classmates break down with stress. She finds it especially alarming that 22 percent of students, according to the study, are so stressed out that they sought help.

“A large proportion of the students feel so bad that they might end up dropping out. There is a huge need for stress prevention in the study programmes,” Gry Reiter, DM Students”

“We often hear the criticism that everyone can feel stressed. But nearly every fourth student has sought help from a doctor or relatives. It shows that a large proportion of the students feel so bad that they might end up dropping out. There is a huge need for stress prevention in the study programmes,” says Gry Reiter, DM Students.

After the 2014 survey results which showed that students were more stressed, the Faculty of Health and Medicine launched a number of initiatives to improve the study environment.

“We have held several events with tutors and with the Student Counselling Service including courses in stress management and in exam techniques,” says Freja Dalsgaard Olsen.

And the different initiatives have had a positive impact. According to a new study from 2016, the number of stressed students dropped to 43 per cent in daily life and 73 per cent up to an exam.

The social element has been removed

Gry Inger Reiter from DM Students does not think that the problem can be solved with courses in stress management and examination technique however.

“I’m not so happy with these individualistic approaches, where they push responsibility on to the individual student. And I don’t think it was a smart move to cut back on many of the social offerings like introductory fresher courses. These were relatively inexpensive initiatives, because they were organized by student volunteers. And the social environment really means a lot for whether you feel lonely and stressed out.”

What do you do in DM to help improve students’ work conditions?
“Our activity pool supports voluntary initiatives in the study programmes. It’s about creating an environment that gives you friends to support you. And then we can also see that those who have a study-related work, also find it easier to study. You then get a good link between theory and practice, and get to see the point of it all,” says Gry Reiter.