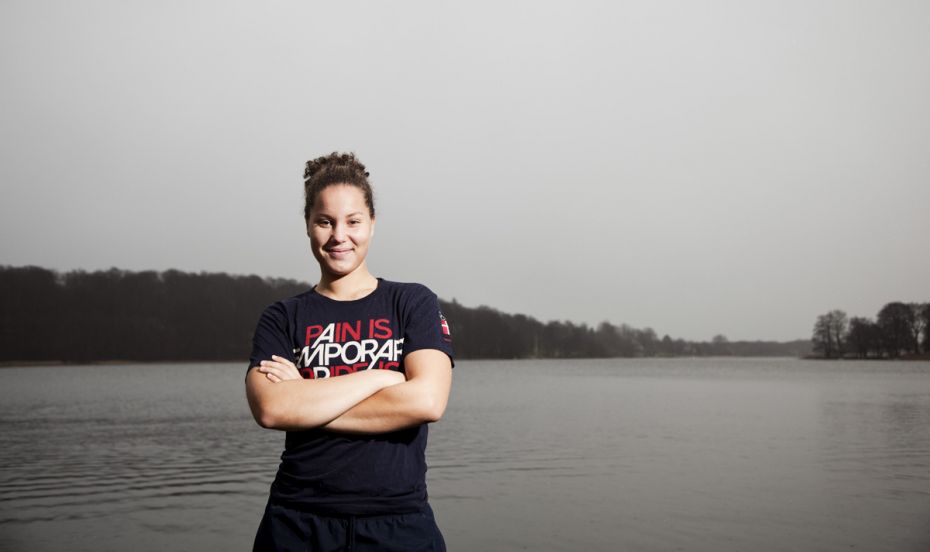 Anne Dsane Andersen is a student of public health at UCPH and is rowing (women’s coxless pair) with Lærke Berg Rasmussen, who is a student of political science
image: Das Büro for Danmarks Idrætsforbund, Team Danmark

Four students from the University of Copenhagen are currently at the Olympic Games. Supported by the university and the national Danish team, they combine their studies with their lives as elite athletes. And two of them, rowers Anne Dsane Andersen and Lærke Berg Ramussen, have just won bronze medals.

Employees and students at the University of Copenhagen (UCPH) have had an extra reason to cheer for four Danish athletes, currently at the Olympic Games in Rio.

Unfortunately, UCPH-student and reigning Olympic champion Mads Reinholdt Rasmussen was not able to repeat his victory and finished 10th in the men’s lightweight double sculls with his partner Rasmus Quist. But on 12 August, Anne Dsane Anders and Lærke Berg Rasmussen won bronze medals in women’s coxless pair at this their first Olympic Games. And on 20 August, there’s a good chance that Annika Langvad, who is the reigning World Champion, might secure the second gold medal for Denmark at the 2016 Olympics.

According to Pernille Kindtler, area manager of the Guidance and Admissions office, UCPH would like to admit even more elite athletes.

A new UCPH webpage explains to elite athletes how they can apply via the ‘quota 2’ system which admits students based on post-school experience – by highlighting the specific experience and skills from a sporting career.

The page explains how to combine elite sport with demanding university studies.

“All evidence suggests that elite athletes are good students, because they are focused and structured. They are ambitious, both in terms of their studies and their sport. But they need to be allowed to do things differently and at their own pace, because they, for example, can be forced to be away at sports events during exams,” says Pernille Kindtler.

UCPH has produced two films, one with rower Anne Dsane Andersen, who is in Rio and one with pole vaulter Rasmus Wejnold Jørgensen, who unfortunately, in the end, was not selected for the Games.

In the films (one of them below, in Danish) they offer advice on how to combine elite sports with a full time university study.

Anne Dsane Andersen praises UCPH for giving her the opportunity to follow her programme of study even though she cannot always be present. She also praises the guidance and admissions office for taking her needs seriously.

Studies can lead to better results

The Danish elite sports entity Team Danmark would like more athletes to get an education, as this can ensure them a career after they retire from their sport.

“Experience shows that athletes thrive and perform better when they are not focusing 100 percent on their sport. They are also less vulnerable when their identity is also bound to something else. So following a study programme is a really good idea”, says Magnus Wonsyld, a consultant at Team Danmark.

Team Danmark offers help in paying for additional teaching, and in providing a ‘study buddy’, a fellow student who can help take notes when the athlete is absent from class.