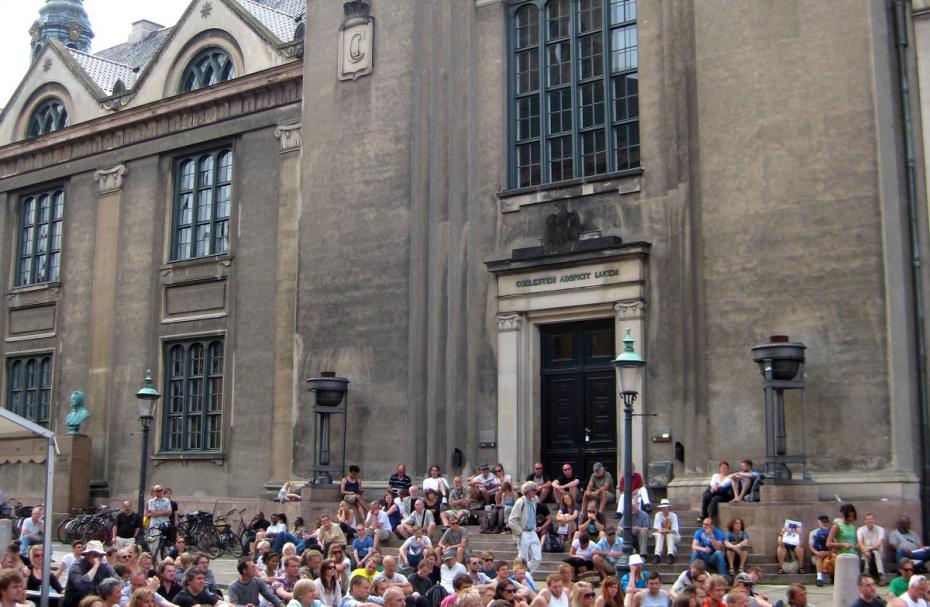 Entrance to the Ceremonial Hall on Central Campus, University of Copenhagen. Plans to hire in 2014
image: Marie Czuray

Despite a projected DKK 200 million loss on the 2014 budget, the University of Copenhagen Board of Directors is optimistic. The body of scientific staff is to increase 4 per cent in the coming year

An estimated DKK 200 million in the red for the next financial year would probably have most boards of directors reduced to tears. But secured government funding, and a turnover of DKK 8 billion coupled with a net worth of approximately DKK 1.2 billion, has the Board of Directors at the University of Copenhagen (UCPH) feeling optimistic:

The number of VIP’s (the acronym for the Danish words for scientific staff) is therefore set to increase by 4 per cent over the next year, and the overall expenditure on wages for VIP’s is due to increase by DKK 114 million.

Net worth to drop

UCPH management was praised for its 2014 budget when it was adopted by the Board on Tuesday 10 December.

Rector Ralf Hemmingsen declared that finances are secured up until 2016 as the Danish government has set the research and education subsidies for universities for the next few years.

This is why the University is investing its own net worth in hiring new VIP’s. The net worth is set to drop from about DKK 1.2 billion to DKK 813 million by 2017 – the amount deemed necessary by the University Board of Director’s. And that’s including a DKK 555 million donation from Mærsk for a new building at Panum.

At the Board meeting, Rector Ralf Hemmingsen said that lay-off’s are not on the horizon. This said it is not possible to guarantee that cutbacks won’t be necessary at individual faculties if projected research grants and teaching grants aren’t met.

University Director Jørgen Honoré said that they wish to avoid lay-offs, both “for the sake of staff relations and because it takes too long to get back to the same level.”

Because of the new study progress reform, a risk assessment is also included in 2014’s budget. The reform makes it harder to predict the amount of funding the university will receive for student completion. It will most likely be a year or so before the University can say anything about the cumulative effects of the reform.