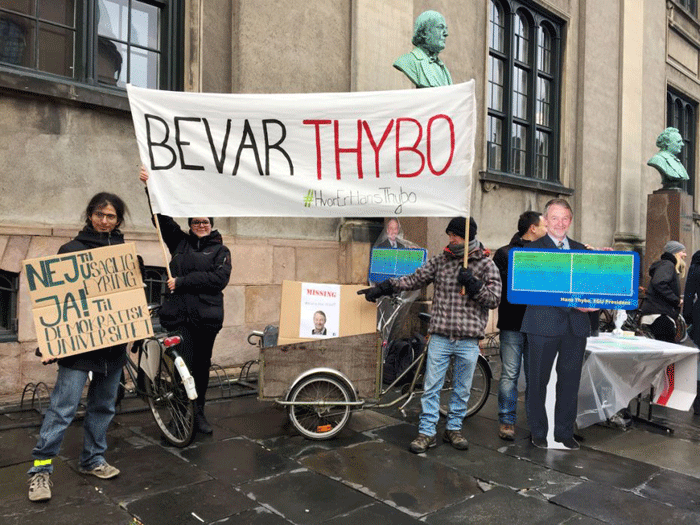 The University of Copenhagen spent approximately DKK 500, 000 on a Deloitte audit of the research accounts of now-dismissed geology professor Hans Thybo. The auditors only found what a legal expert deems trivialities.

The University of Copenhagen (UCPH) has long had a critical search light directed at the internationally-recognised geology professor Hans Thybo before it succeeded in firing him in November of this year. This is shown by documents which Uniavisen has accessed.

Thybo was ultimately dismissed because he sent work-related mails from his private gmail account and because he asked a junior postdoc to write critically about management from the Department of Geology and Natural Resource Management (IGN) in an employee satisfaction survey.

However as early as September 2014, the Faculty of Science management hired auditors Deloitte to go through Thybo’s research expenses and accounts from 1 January 2013 to 30 September 2014.

The documents show that the Faculty of Science paid three invoices to Deloitte called “Assisted review of research account,” worth DKK 194.593, DKK 215.109 and DKK 95.875.

The total expenditure landed at 505, 577 DKK including VAT.

But the auditors did not find any serious breaches by Thybo, says Lars Bo Langsted, professor of law at Aalborg University specialising in economic crime, after reading the Deloitte report.

“We are clearly talking about minor offences and there is absolutely no suggestion of criminal offences,” says Bo Langsted.

The report shows, for example, that in six instances Thybo did not buy the cheapest airfare when conducting work travel.

“There is naturally some sloppiness when you need to uphold travel regulations, but I believe that many public employees have tried to buy an airfare which is a little too expensive,” says Bo Langsted.

Thybo also purchased IT equipment valued at approximately 20, 000 DKK outside of official UCPH procurement contracts, and he had declared costs for transport such as to the DR concert hall for UCPH’s annual commemoration party.

Additionally, it was found that UCPH mistakenly paid out a reimbursement of 45, 194 DKK to Thybo twice, but prior to the audit Thybo had already drawn UCPH’s attention to the mistake and took the initiative to pay back the money.

He also received a refunded conference fee worth 2,625 DKK, twice. He has since returned the money to the UCPH coffers.

The auditor’s report also showed that Thybo had a reason to doubt in what instances he had permission to use the funds:

”We have, through our review, been able to confirm that there are no fixed procedures and checklists to ensure monitoring in accordance with the guidelines, nor procedures for when there is a need for prior approval,” reads the report.

On 18 March 2015, Thybo was called in to a meeting with John Renner Hansen, dean of the Faculty of Science, in order to go through the result of the audit.

The faculty waived the requirement to repay the IT-equipment which Thybo had bought outside of UCPH procurement contracts, as it was determined that Thybo had not made the purchase in bad faith and that therefore there was no basis to further investigate whether it had led to additional costs for the university.

The faculty also waives the requirement to repay the additional cost of 30, 000 DKK in airfares, which the department had planned to do.

“Based on the total material it has not been possible to demonstrate that the tickets could have been bought cheaper, including at which price, and it is therefore not possible to raise a claim. Nor has it been possible to demonstrate that the department / UCPH followed up the case after you sent an email with an explanation to the then-head of administration, so the department is deemed to have approved your explanation and thus your purchase of the tickets,” writes the dean to Thybo.

Meanwhile, of the expenses related to the University’s annual commemoration party – include the taxi ride to DR concert hall – the dean writes that “it referred to an arrangement covered by representation rules,” and Thybo is thus not required to cover the cost.

The travel expenses of DKK 45, 194 have also been returned after Thybo took to initiative to refund the money, as well as a conference fee of DKK 2,625 which had been erroneously paid out twice to Thybo.

Dean: We had a problem

John Renner Hansen, dean at the faculty, revealed that he could not comment on the amounts and repayments as it is a personnel case, however he maintains that Thybo broke the rules.

He would not comment on whether the DKK 500, 000 was money well spent, however he says:

“There was a problem that we wished to uncover, but it was difficult to ascertain what had happened. It is not about money, but about ensuring the research funds are correctly used, so I believe that the audit was necessary.”

He adds that it is not a given that the auditing costs would have ended up cheaper had the investigation been taken on by the faculty itself. Employees must be paid, and it could have taken them longer to carry out the audit than the experts from Deloitte.

Renner Hansen also adds that he decided that the audit would not raise further consequences for Thybo, as both he and the department administration had made mistakes.

”Neither party had been updated on the rules and acted carelessly, but I have requested the department to rectify this and have warned that the rules must be followed,” says the dean.

Thybo had complained to the rector

Thybo had complained to rector Ralf Hemmingsen regarding dean Renner Hansen, the department head and employees within IGN’s management.

“I draw your attention to the fact that over the last two and a half years there has been a significant breach of administrative practice, UCPH rules and even the law by the Faculty of Science in their handling of several cases, and the dean has participated in these breaches and has condoned a number of rule breaches which he was made aware of,” wrote Thybo in his complaint.

One of many points in the ten-page complaint is that the dean initiated the audit of Thybo based on offensive and unfounded accusations from IGN administration:

“The audit was initiated without informing me of the charges, which is a clear violation of UCPH rules and procedures,” writes Thybo.

Willerslev: we want the truth

Eske Willerslev, internationally-renowned DNA researcher and a member of the UCPH board has together with his employee representative board colleagues protested against the basis for Thybo’s dismissal.

He will not comment on the specific case, but he says: ”If management believes that Thybo has committed an illegal offense which could justify a dismissal, it must provide that as its official reason.”

He adds that the grounds that Thybo had sent emails from his private account and encouraged a postdoc to be critical of management has justifiably created uncertainty among staff within science.

”If the case creates a precedent, management could theoretically fire all employees at UCPH. If there is a reason for the dismissal other than the official one, I encourage management to come forward with it, as the case as it is presented is destructive to confidence between management and science staff and for UCPH’s international reputation,” says Willerslev.