University Chancellor in speech to Danish Parliament: Students should be exposed to all kinds of ideas 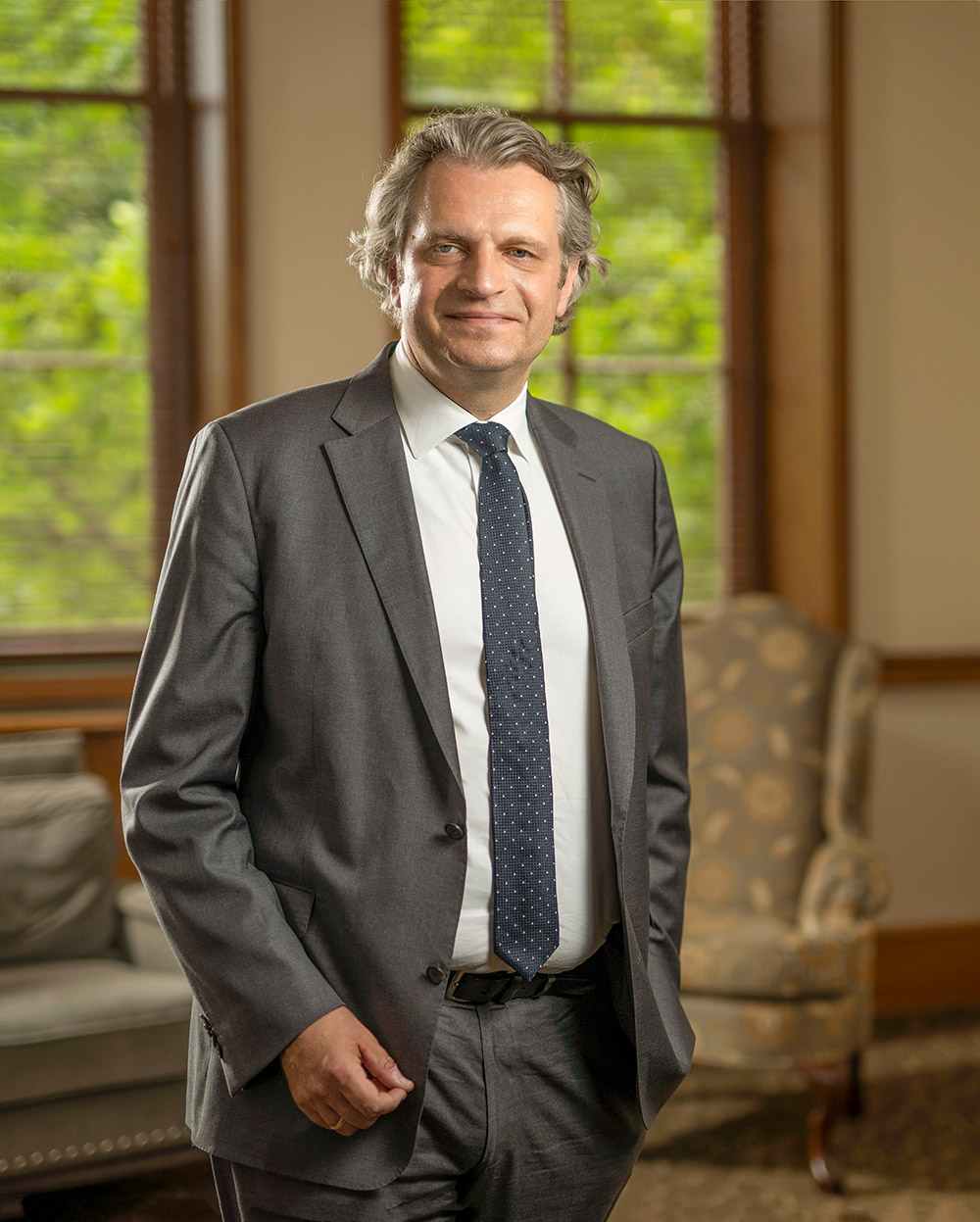 Chicago Principles — The very lifeblood of a university is under threat, Daniel Diermeier, who is former provost at the University of Chicago, stated in the Danish Parliament during a hearing about The Chicago principles of intellectual freedom.

Good afternoon. And thank you for asking me to speak to you today.

It is my strong belief that those who care about higher education must pay attention to and defend universities as essential forums for free expression, open inquiry, and civil discourse.

The Education and Research Committee held an open consultation on the introduction of the so-called Chicago principles in a Danish university context. The hearing took place on Tuesday, May 3, 2022 at 14.00-16.00 in the County Council Hall at Christiansborg.

So, I am pleased that your committee is taking up this vital issue, and I am grateful for the opportunity to offer my perspective.

First, I would like to tell you about my background and experience working on issues of free expression and open inquiry in the American higher education system.

From 2016 through 2020, I served as the provost at the University of Chicago. In the American system of colleges and universities, a provost serves as the chief academic officer. That person is responsible for all aspects of intellectual activity at an institution, from hiring deans and directing the research enterprise, to ensuring that students at every level receive a rigorous and high-quality education.

The University of Chicago has a long tradition of fostering an environment of open and robust debate without undue interference from the university administration.

In 2020, at the onset of the COVID-19 pandemic, I became chancellor of Vanderbilt University. Vanderbilt uses the term chancellor to designate its university president. Like the University of Chicago, Vanderbilt also has a long tradition of free expression and open inquiry.

Both institutions believe that free expression and open inquiry are core values that are necessary to realize the core mission of any great university: to provide transformative education and to engage in path-breaking research.

Even a few years ago, it would have been strange to call for universities to be protectors of open discourse and intellectual diversity. Because that has long been their role by definition.

Universities are, by design, where we come to debate and probe the questions that matter to us most. And our explorations are richest and most fruitful when they are informed by a wide range of viewpoints.

But this very lifeblood of a university—and with it, a free and thinking society—is under threat, as the culture wars encroach on our campuses and actors at both ends of the political spectrum politicize our conversations.

A corrosive state of affairs

Threats to open inquiry and free expression are coming from outside of universities and from within them, as misguided legislation seeks to control what ideas can be taught and discussed; intolerance of certain viewpoints on campus leads to speakers being disinvited and shouted down; and some students and faculty keep their opinions to themselves for fear of backlash and censure.

This state of affairs is corrosive for a university and antithetical to what we do and stand for.

Providing our students with a transformative education, while providing faculty with an environment where they can engage in pathbreaking research, requires a climate where students and faculty can feel free to debate complex issues and challenge conventional wisdom.

Vanderbilt’s campus, like all college campuses, must be a proving ground where ideas can be tested and prevailing thoughts challenged. Because diverse perspectives form the rich soil from which insight and impact grow.

Open discourse and free expression rest on two principles. The first is a rigorous commitment to providing an open forum, where ideas can be freely discussed and a better argument wins.

That first principle has found its most well-known expression in the Chicago Principles.

In 2014, The University of Chicago recognized encroaching dangers for free expression within higher education. Following several events on U.S. campuses in which free expression and open inquiry were seen to be compromised, a University of Chicago faculty committee was formed. It was led by distinguished law professor Geoffrey Stone, and the subsequent report is also known as the ‘Stone Report’.  Its charge was to articulate »the university’s overarching commitment to free, robust, and uninhibited debate and deliberation among all members of the University’s community.«

This led to The Chicago Principles, which read, in part, as follows:

»Because the University is committed to free and open inquiry in all matters, it guarantees all members of the University community the broadest possible latitude to speak, write, listen, challenge, and learn….It is not the proper role of the university to attempt to shield individuals from ideas and opinions they find unwelcome, disagreeable, or even deeply offensive.«

The core idea of the Chicago Principles is that the university needs to be vigilant in providing an open forum for ideas of all kinds even if members of the university community strenuously oppose such ideas.

According to the Foundation for Individual Rights in Education, more than 80 institutions of higher learning in the U.S., both public and private, have endorsed The Chicago Principles. The universities that have adopted the principles are some of the most influential and well-respected in the country. My university, Vanderbilt, is among them. And our commitment to these principles has its roots in our history.

Vanderbilt University’s fifth chancellor, Alexander Heard, spoke often and eloquently about free speech and the proper role of a university.

Amid the turbulence of the 1960s, when our campus hosted speakers as diverse and controversial as the Beat Generation poet Allen Ginsberg, the Black Power activist Stokely Carmichael and the segregationist Senator Strom Thurmond, Chancellor Heard explained the university’s commitment this way:

»A university’s obligation is not to protect students from ideas, but rather to expose them to ideas, and to help make them capable of handling, and, hopefully, having ideas.«

Just last year, our Faculty Senate passed a resolution for the university to provide »an environment for open inquiry and the vigorous exploration and free expression of ideas.«

Principled neutrality was the basis for the University of Chicago’s Kalven Report, named after law professor Harry Kalven, Jr. Published in 1967 during the social upheaval of the 1960s, the Kalven Report stressed the importance of maintaining a position of principled neutrality on general political and social matters—matters that do not affect the functioning of the university directly.

In the early 1970s Vanderbilt’s Chancellor Heard put it this way:

»The social values of open forum and free inquiry cannot be realized without the political neutrality of the university as an institution, except where the university itself is the issue.«

This important principle has largely been forgotten. Many of our peers routinely take political positions while speaking on behalf of their entire university communities. They are weighing in on foreign policy … energy policy … high-profile verdicts and court opinions… and more—all topics worthy of concern, but unrelated to the functioning of a university.

I understand the impulse to speak up. We are living in extraordinary times. Every week seems to bring a new crisis demanding that each of us take a stand, and everyone wants to know which side you’re on.

But a university’s paramount—its essential—mission is to provide the conditions for transformative education and pathbreaking research.

When a university takes any position—when it sends a signal that one point of view is preferable over another—it creates, one public statement at a time, a climate inconsistent with its purpose.

That purpose is not to settle debates … but to foster an atmosphere in which students and faculty can explore even the most difficult and complex issues…and in so doing conduct the vital work of finding insights that can lead to solutions to those issues.

Let me emphasize, that this position of principled neutrality should not be confused with a lack of values.

A university must always proceed from clear values. But its values should be understood as the necessary preconditions for fulfilling its mission, not as an imposition of one opinion on the university community. Principled neutrality is intentional restraint in the service of our mission.

We must be vigorous, firm, and uncompromising in upholding the principles of academic freedom and free expression. But we must practice principled restraint in making comments on general matters of policy that, intentionally or unintentionally, undermine these very foundations of free expression to which a university must be committed.

These commitments require clarity of thought and firmness of character. And they are tested every day.

But they are essential. By our mission, we owe it to our students and faculty to protect and encourage an open discourse and free expression.

We also owe this service to society. Because as our media, legislative bodies, and other traditional forums fall victim to polarization, the academy might be the last, best place where citizens can learn to coexist, converse and cooperate with people whose views differ from their own.