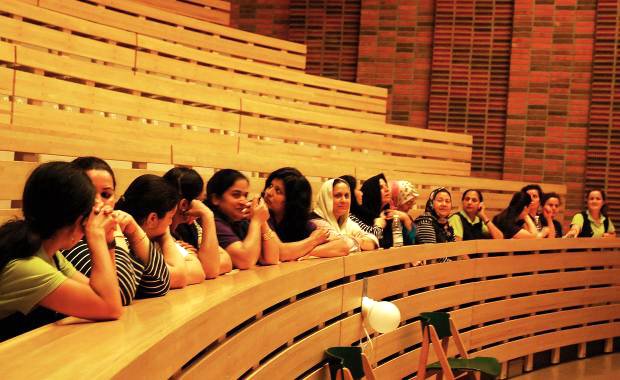 Tension as 30 employees from the cleaning department at the Panum Institute attended the meeting earlier this year to find out which private company would take over
image: Kristina Helena Kristensen

Nine out of 37 cleaning staff have lost their jobs at the Faculty of Health Sciences. This is after management outsourced them to a private cleaning company. The original staff had offered to do a better job for less, but to no avail

Cleaning staff worries that they will be made redundant at the Faculty of Health Sciences have turned out to be justified.

In June 2011, university management decided that a private cleaning firm would replace the current cleaning department at the Panum Institute from September 2011. This was despite the staff’s offer to do a better job at a lower cost.

According to Søren Møller, staff rep for the cleaning staff at the University of Copenhagen, nine out of the 37 cleaners have subsequently been made redundant, after the work has been outsourced to the cleaning firm Allianceplus.

Can the firm deliver?

»They were laid off because the new company will reduce the amount of hours spent on cleaning,« says Søren Møller. »And they will charge [the University of Copenhagen] a higher hourly rate.«

Despite the decrease in staff, Allianceplus costs DKK 843,000 more a year than the original cleaning department.

»The question is, can the firm deliver the quality they have promised? One thing is certain – the cleaners that have kept their jobs will have to run faster unless there’s a brilliant new cleaning machine that no one has ever heard of,« says Søren Møller.

The cleaning staff who have lost their jobs are now waiting to find out if they will be offered work for Allianceplus elsewhere.

The Danish Confederation of Trade Unions (LO) has taken up the case on behalf of the cleaning staff’s union 3F: They say that management has failed to document that the original cleaning department was not the best option.

This means that they have acted against the procurement rules, knowingly taking on extra costs instead of handling the job internally.

Yes, they were cheaper, but…

The Faculty of Health Science responded to these claims in September: It said that staff had put aside too few funds to cover overhead costs for administration, management, buildings etc in their offer.

Cleaning personnel had also calculated on 6.5 per cent sickness and holiday leave. But this is not realistic, as the present rate is 19 per cent, said faculty director Arnold Boon then.

»Yes, they were cheaper, but I have to ensure that we get the quality that we need,« he said in September 2011 to the Danish section Universitetsavisen .