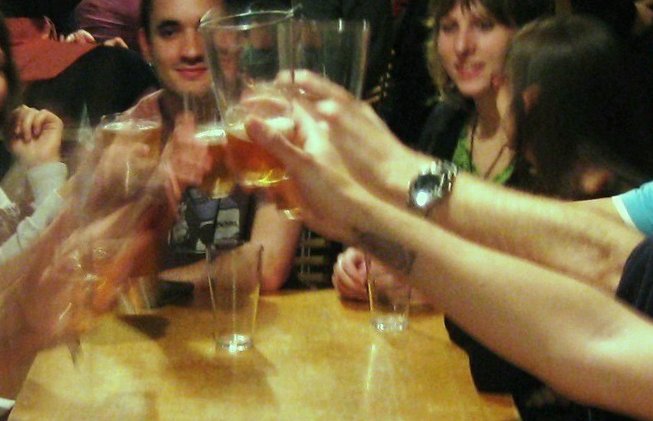 There will be no more of this indoors, before Friday 5 pm. Luckily for some, discount supermarkets are nearby. This is a staged photo from en earlier drinking culture theme on the University Post
image: Marie Czuray

No alcohol is served on weekdays, except Friday after five. New restrictions on the sale of alcohol at the Faculty of Humanities, University of Copenhagen after 'unfortunate' episodes of drinking culture

A restrictive policy implemented at the University of Copenhagen’s faculty of Humanities in September 2013 is still the subject of much debate at the South Campus. The many small bars and cafés that make up the centre of student social life, have had restrictions placed on their sale of alcohol.

According to the new rules, alcohol cannot be sold on weekdays except Friday, and then not until five in the evening. There is, however, room for the occasional exception – student cafés can apply for special permission from the Faculty for events.

The tougher rules were made because the drinking culture at KUA had taken an unfortunate turn, according to faculty director Kristian Boye Petersen.

“In connection with several of the student cafés at KUA, a very noticeable drinking culture had developed, which also had some unfortunate implications during parties,” he said, referring to “an indeterminable amount of mess” and “actual vandalism of buildings and inventory.”

To improve the study environment, KUA is now open for longer than it used to, which also meant that the alcohol intake at the cafés was more difficult to control for faculty management.

The restrictive alcohol policy is also an attempt to help make minority groups, who don’t drink alcohol, feel more at home. This also goes for students from abroad who have different drinking norms.

But you can still drink

The students running the cafés have had to turn away customers. Faculty director Petersen acknowledges that the new policy has meant a loss in revenue for the small student cafés:

“The previous, unrestricted sale of alcohol meant that the cafés were able to pay speakers at student events. This is no longer the case. I’m trying to think of alternatives,” he says.

Should a student want to procure a beer, however, KUA still has café ‘Mødestedet’, which has a license to sell alcohol, as a part of the canteen. And alternatively, the discount supermarkets are just a stone’s throw away from both KUA1 and KUA2.