We proved that Russia fired artillery into Ukraine 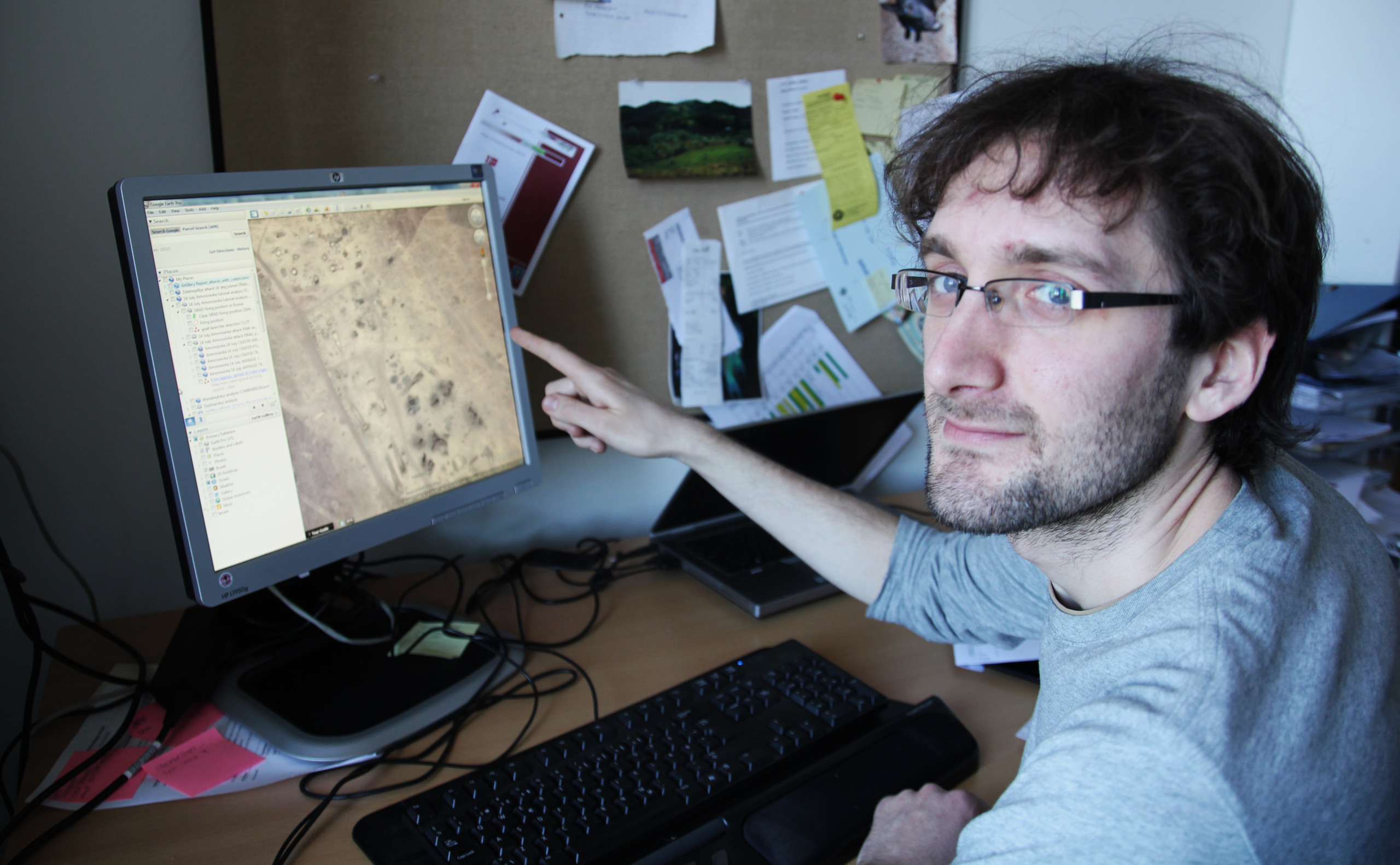 It took months of studying trajectories on Google Earth, zooming in on craters and updating spreadsheets. But their research proved the Russians did it

Can this be verified? Did they really fire into Ukraine in the summer of 2014 despite their public denials?

It had been playing on the mind of Sean Case, a postdoctoral research student at the University of Copenhagen since the summer of 2014, when he first heard about the claimed Russian attacks. Then in November, out of curiosity, he started zooming in and out of Google Earth images of the battlefields.

Since then he has been using much of his spare time scrolling in and out of Google Earth’s imagery, tagging crater locations, calculating shell trajectories, and updating Excel spreadsheets.

“As far as I know, nobody had really looked into it systematically before November 2014. I knew there had been an update of Google Earth’s satellite imagery for this location right after the attacks in July. And I had it in the back of my mind that it would be possible to look more closely,” he explains to the University Post.

And then Sean Case just did it. Four or five months later, and in co-operation with the investigative journalists co-operative Bellingcat, Sean was able to present the proof.

The story made it big in 2015. On the University Post it garnered 100,000 readers, hundreds of thousands too on the Bellingcat site and other media in Ukraine, Russia and the world.

More than just aiding the rebels

It is all about a series of attacks July through September 2014 in the Donbas region in the East of Ukraine. Ukrainian armed forces had launched an operation against pro-Russian separatists, regaining control over their border with Russia.

Then suddenly, 11 July, out of nowhere, incoming shells.

They killed 30 and wounded 100 Ukrainian soldiers immediately. In the weeks that followed, the Ukrainian army was attacked again and again, and the separatist forces were able to launch an offensive in their wake and regain territory.

Only now do I realise that Google Earth vividly shows how one soldier can press a firing button one place and kill 30 soldiers far, far, away, suddenly, and with deadly accuracy.

But where were the attacks coming from? Russia denied involvement, pointing instead to the separatists. There were claims and counterclaims. If it could be proven that the Russian army really was behind it, it would be the proof that some had suspected all along. That Russia was doing more than just aiding the rebels.

Digital Globe, a US civilian satellite image company, provides high resolution imagery for Google Earth from its satellites, and offers (probably even higher resolution) images to the US military.

The Malaysian Airlines MH17 passenger jet was shot down 17 July, and the idea was about that updated imagery might be of use for ongoing war investigations of this kind. In November when Sean Case got going, he was quick to locate the first craters.

“I found the artillery shell craters on Google Earth quite easily, and published them on a website I set up” he explains, referring to his site mapinvestigation.blogspot,com.

Sean e-mailed Eliot Higgins, a British journalist known for investigative social media and weapons analysis, and who had started his own investigative site Bellingcat in July 2014.

“So far I just had google maps with polygons around it, and we needed some more proof. It was about this time that I got hold of a US army manual on field artillery,” Sean Case explains.

Craters can normally be analysed to find which direction the shells are coming from. The earth that sprays out fans out in the opposite direction than the incoming trajectory of the shell. Sean had the craters, but he had not yet the proof from the craters of the incoming shells’ trajectories.

“The normal way of doing crater analysis is by going to the crater, putting in a few sticks, using a tripod, and determining where the shell comes from.”

“What I had found so far was the presumed firing point, clear marks of tracks in the ground from vehicles with artillery. Now we could start seeing the correlation between the tracks on the ground maybe more than 15 kilometres away on the Russian side, and the incoming trajectory of the shells,” he explains.

We are in Sean Case’ office. For the University Post, Sean Case zooms in and out on the satellite images. He has shown the craters. But somehow, it is only now after all the technical detail has been gone through, that the real war behind the images sets in.

“It is most likely the Grad,” Sean Case explains, referring to the mobile BM-21 Russian rocket launcher. ‘Grad’ is the Russian word for ‘hail’.

Because zooming out from the craters, Sean and his team have marked the projected trajectories on Google Earth. They look like tracer bullets, zooming in again they go back to specific sites across the border, more than 15 kilometres away. Zooming in, the marks from the firing points are seen.

Only now do I realise that Google Earth vividly shows how one soldier can press a firing button one place and kill 30 soldiers far, far, away, suddenly, and with deadly accuracy.

“It is most likely the Grad,” Sean Case explains, referring to the mobile BM-21 Russian rocket launcher. ‘Grad’ is the Russian word for ‘hail’. It is mounted on a lorry, fires 40 shells at a time, range 20 plus kilometres.

“Other people have looked at crater sites, but in our report we went through 1,300 craters in three sites,” Sean says.

The sites, of course, were killing zones, and Sean zooms in on one site where the burnt-out vehicles can still be seen (see gallery below).

Sean Case and Bellingcat kept quiet about their findings until February of 2015 while they analysed and checked.

How did you keep quiet about it for so long?
“When I started seeing the craters and the firing points, I really wanted proof. If there is anything that the detractors will discredit, they will. I wanted to make sure there was overwhelming evidence, and the Bellingcat group had the same philosophy.”

On the day of the University Post publishing, a colleague from another department at UCPH pointed to what could have been a crack in Sean and Bellingcat’s otherwise solid analysis. Images from Digital Globe may not necessarily be taken perpendicular to the ground, he pointed out, and it is normal practice to adapt their satellite images subsequently on to a base map, before it appears on GoogleEarth.

This is big stuff, meddling in global politics, in a war zone, with the Russians. Were you ever scared?

Sean Case conferred with Bellingcat colleagues. Their conclusion. “It would be significant in mountainous terrain, where a distortion might skew the results. But here the terrain is mostly flat. Any non-perpendicular angle would not swing the trajectory of the shells.”

So they had their smoking gun. The Russians did it.

We are at the University of Copenhagen, and Sean Case’s ‘daytime’ research is with organic fertilisers from waste and composts for agriculture. It is not, of course, related to his study of shell trajectories in the Ukrainian/Russian Donbas conflict. But his general skills and his systematic attitude to his research has come in handy for both projects, he laughs.

“I really try to keep the energy for my normal project and do this on my evenings and weekends!”

This is big stuff, meddling in global politics, in a war zone, with the Russians.

Were you ever scared?
“The first day the report came out, I did look one extra time outside my window,” Sean Case laughs. “But if the Russians were ever going to assassinate me they would just make this story even more notorious.”

“No I have never been scared. This is open source research. And this is not about me,” he says.