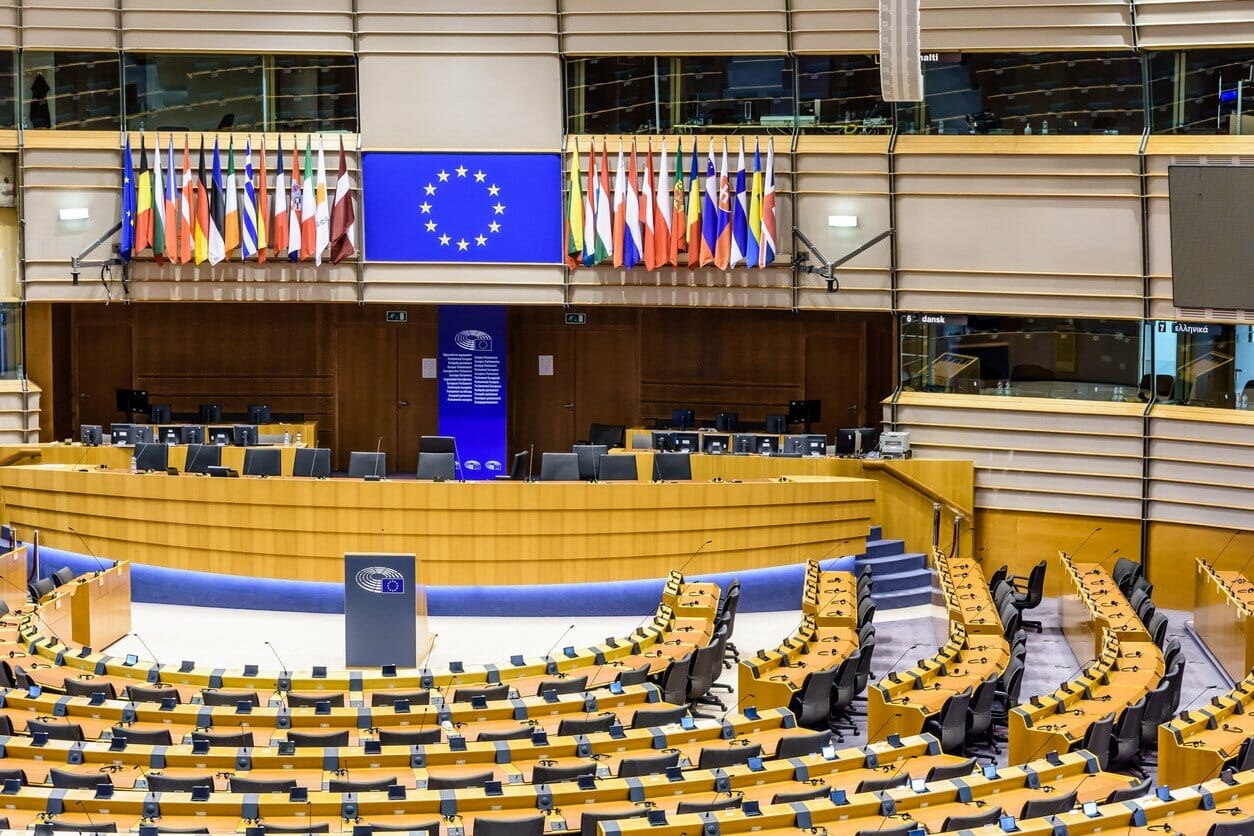 The European Parliament in the hemicycle in the Espace Leopold, Brussels.
image: istockphoto

With the European parliamentary elections on Sunday, this rounds it up for academics in Copenhagen

Future of science in Europe examined

On the eve of the European Union’s parliamentary elections, a special issue of the journal and science news site Nature has examined the prospects for science across the region with an infographic here: 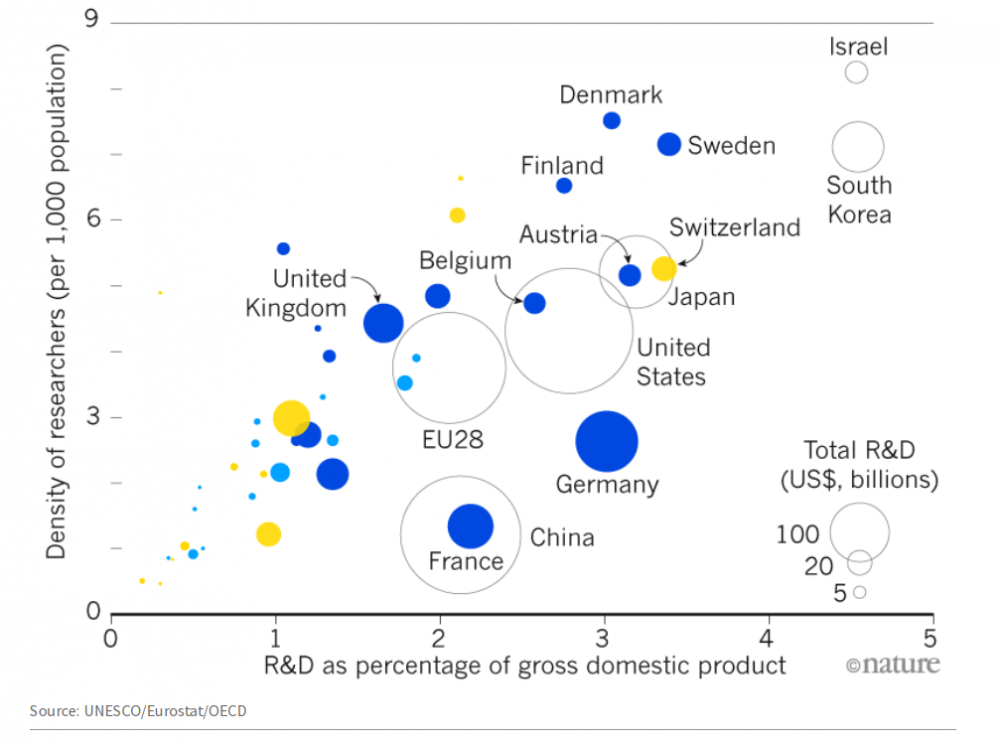 The EU's research economy. Sweden, Austria, Denmark, Finland, Switzerland lead the world in terms of the share of their economy devoted to research (behind Israel and South Korea). From Nature infographic with source UNESCO/Eurostat/OECD

While economic forecasts suggest that Europe as a whole is on the upturn, research spending in some countries hasn’t recovered since the global financial crisis of 2008.

A Nature set of infographics explores the research investment and scientific output of the disparate countries that make up Europe.

A feature here examines how the EU is developing its next giant research programme, called Horizon Europe, a roughly €100-billion (US$ 112 billion) funding stream that will run from 2021 to 2027 and is a linchpin for collaborations across the bloc.

And another feature here looks at the EU’s controversial plans to boost its spending on defence research, a programme that many academics oppose.

The Conservative Party in Denmark looks to lose its seat in the European Parliament for the first time in history. The Red/Green Alliance (Enhedslisten) is struggling with DPP (Dansk Folkeparti) for the last mandate, according to the poll.

A survey conducted by Epinion for DR News has the Conservative Party in Denmark out of the European Parliament for the first time since the first direct EP election in 1979. In the last election in 2014, the conservatives got 9.1 per cent of the votes. The party will now, according to the poll, only get 3.9 per cent.
Denmark will thereby lose its only spot in the largest political group in the European Parliament, the Christian-Conservative EPP group.

The Liberal Party (Venstre) on the other hand can be happy. It will get four seats, twice as many as the party succeeded in getting in 2014.

Danish voters are thereby posed to send six MEPs in total into the liberal Alde group in the European parliament following elections on Sunday 26 May.

Denmark elects 13 MEPs. See fact box below right for a breakdown of where the Danish political parties belong in the European parliament.

Danish political parties – where do they belong in Europe?

What is a group in the European Parliament?

The vast majority of the Members of the European Parliament are in eight political groups, a lot like parties in national parliaments.

A minimum of 25 members from at least one quarter of EU member states is needed to set up a group.

National political parties belong to groups of parties with the same overarching political affiliation in the European parliament.

EPP – the group for the European People’s Party: The largest group  with European conservative and christian democrat politicians, including the Danish Bendt Bendtsen (Conservative).

Alde –  The Alliance of Liberals and Democrats for Europe: The liberal group, which includes both the Danish Liberal Party (Venstre) and the Social Liberal (Radikale Venstre) party.

GUE/NGL – The Confederal Group of The European Left/Nordic Green Left: The group for a number of the EU left-wing parties, including the Popular movement against the EU, which wants Denmark out of the EU.

The Greens: The green left-wing group, which has the Danish Socialist People’s Party (SF) as a member.

EFDD – European Freedom and Direct Democracy: The hard-line EU-sceptical right-wing group, where the British UKIP and the Five Star Movement from Italy are members.

ENF – Europe of Nations and Freedom: Another hard-line group of eurosceptics, founded by Rassemblement National from France, and where the Italian government party Lega is a member.

How did Danish politicians vote on our behalf in Europe?

To find out how you should vote in the European election, it is good to know how the present MEP’s and party groups voted in the last term.  The yourvotematters.eu vote matching site has a nifty tracker that can help you along the way.

Support for the Danish People’s Party (DPP) has fallen to a seven-year low. A poll published by financial daily Børsen puts backing for the populist, eurosceptic party at just 10.8 per cent, compared to 21.1 per cent in the 2015 election, as voters show more concern about the climate than immigration, the DPP’s vote-winning issue in the past four elections.

Bloomberg News reports how the the apparent shift in voter sentiment is also being affected by other factors: The emergence of fringe, far-right anti-migrant parties such as Stram Kurs (Hard Line) and the New Conservatives, who are both heading for parliament and splitting the nationalist vote.

With Prime Minister Lars Løkke Rasmussen relying on the DPP for an overall majority their decline in popularity is likely to spell the end of his government. Most polls show he will be replaced by opposition leader Mette Frederiksen.

Unions and commerce: Stopping the cuts is not enough

Even though both the governing coalition and opposition now want to stop the so-called reprioritisation contribution cuts, more needs to be done to stop the dismantling of Denmark’s knowledge society. This is according to the chair of the Danish Association of Masters and PhDs (DM) Camilla Gregersen and the head of research policy at the Danish Chamber of Commerce Mads Eriksen in a joint comment on Altinget.

Strong study programmes will only stay strong if they receive investments. It is therefore a good thing that both of the prime minister candidates’ parties have announced that they will stop cutbacks from next year – the so-called reprioritisation contribution – which has plagued higher education programmes in recent years.

»But dropping a cut is far from getting a new vision on what is to be done. We want to forge a stronger link to the social problems we are facing – such as climate and health – and solutions: investments in research and education,« they say.

A research team from the University of Copenhagen, Statens Serum Institut and Rigshospitalet has identified the first gene that predisposes to fainting. The study was based on data from more than 400,000 individuals.

Heat, dehydration and anxiety can cause people to faint which potentially can be fatal if it is happening while driving or cycling. The researchers are the first to identify a gene associated with an increased risk of fainting, also called syncope.

»We have learned that a part of chromosome 2 increases the risk of fainting. This means that there is a genetic risk variant that predisposes to fainting. In addition, we are the first to show that fainting is genetically determined by linking an increased risk of fainting with an exact position in the genome,« says Associate Professor Morten Salling Olesen from the Department of Biomedical Sciences, University of Copenhagen and the Laboratory for Molecular Cardiology, Rigshospitalet.

As young people drive a global wake-up call on climate change, many universities are struggling with the concept and agenda of ‘greening’. And their achievements to date have been “scattered and unsystematic”, according to University World News, citing a report from UN Environment, the leading global environmental authority.

»While some noteworthy exemplars of university sustainability initiatives exist around the world, there is a need to maximise the potential benefits by encouraging their replication in as many universities as possible globally.«