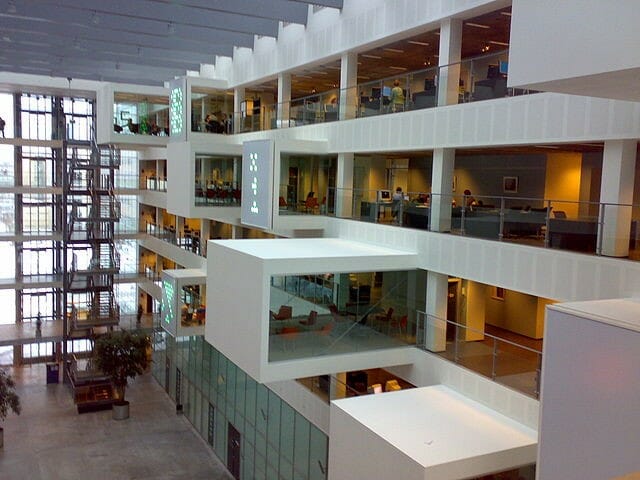 IT University of Copenhagen, by Marie-Louise Valsted - Flickr, CC

As the first Danish university, the IT University of Copenhagen (ITU) now has 100 percent of all its research articles ‘open access’ or freely available online.

In a report, the European University Association recently estimated that European universities, by moving to an Open Access system, could save approximately DKK 1.27 billion a year.  At present, half of all scientific journals are in the hands of five large companies (RELX Group (owner of Elsevier), Wiley-Blackwell, Nature, SAGE and Taylor & Francis), who are alleged to skim monopoly-size profits from universities and taxpayers.

»The fact we have achieved this already,« says prorector at ITU Jens Christian Godskesen, »is due to a targeted effort over the last few years, where we have increased the quality of the registration of publications. In many cases, research publications can be accessed directly from ITU’s website. It is in large part due to the effort of all of our researchers and research administration that we are already fulfilling the objective of Denmark’s National Strategy for Open Access.«

With 64 percent, DTU has the second largest share of Open Access publications, followed by CBS with 48 percent.

UCPH open access up, but still only at 40 per cent

The University of Copenhagen increased its share of Open Access by 13 percentage points last year, but is still only at 40 per cent according to the data on the Open Access Indicator measurement.

21 per cent of articles are blocked for open access, according to the indicator, because the publishers do not permit it, or because they have set embargo periods for their release which go beyond one year. In some cases the embargo holds for several years.

In its latest national strategy for open access from 2018, open access is to be carried out without increasing costs the costs of publication of scientific results.

Applicants from foreign universities are hampered by needless bureaucracy and immigration policy, reports Yle, citing a survey of Finnish universities. Potential students have to wait months for permission to stay in the country, according to representatives of universities.

Higher education could otherwise turn into a ‘money spinner’ for Finland, writes University World News as tuition fees of up to EUR 18,000 per academic year have been required since 2016 for students originating from outside the European Union, the European Economic Area and Switzerland.

US court: Professors can be fired if teaching style is ‘offensive’

More than three years after a professor sued Louisiana State University for firing her over her unconventional pedagogy, the Fifth United States Circuit Court of Appeals has rejected her appeal.

Enjoy sex »while the sex is good,« Buchanan is alleged to have told the student in front of her classmates. »Just wait until you’re married five years.«

She was accused of using the word »pussy«, belittling one of her own students during an assessment meeting, and offering another student condoms while warning her that her grades would suffer if she chose to become a mother. Enjoy sex »while the sex is good,« Buchanan is alleged to have told the student in front of her classmates. »Just wait until you’re married five years.«

The ruling goes against the arguments that students should be prepared for coarse professional environments, or that students’ attention can be kept by using coarse language or discussing taboo topics.

Biodiversity of distant past can now reveal impact of climate

Paleontologists in Copenhagen and Helsinki have mapped out biodiversity in the distant past in new detail, now making it possible to measure the impact of climate, writes Phys.org. The scientists’ study has just been published in Proceedings of the National Academy of Sciences (PNAS).

»As previous calculations of biodiversity change in deep time have been based on a time-binning partitioning divided into 10—11 million year intervals, direct comparisons with climate impacts have not been possible. Our new biodiversity curves provide unprecedentedly high temporal resolution, allowing us to take a very large step towards the understanding and coherence of climate-related and environmental impacts on overall biodiversity—both in relation to species development and extinction event intervals,« says Assistant Professor Christian Mac Ørum of the Natural History Museum of Denmark, University of Copenhagen.

Fungus-growing ants protect it with antibiotics

Leafcutter ants harvest food for their food – a fungal crop they cultivate and protect using antibiotics.

OK, this is old news.

At least in the sense that the research was published in 2016, but microbial ecologist Linh Anh Cat now writes it up excellently in Forbes.

Leafcutter ants started to farm fungi 55 to 60 million years ago. They don’t consume the leaves they collect. Their food does, and the industrial-scale leave-cutting supports the ants’ farming industry.

Both human and ant agriculture face similar challenges, particularly keeping their crop disease-free. Both humans and ants employ antimicrobial compounds. In fact, previous research found that ants carried antibiotic compounds in specialized structures on the underside of their bodies.