»When you have knitted something, you have ever so slightly changed the universe. It has one more sock!« 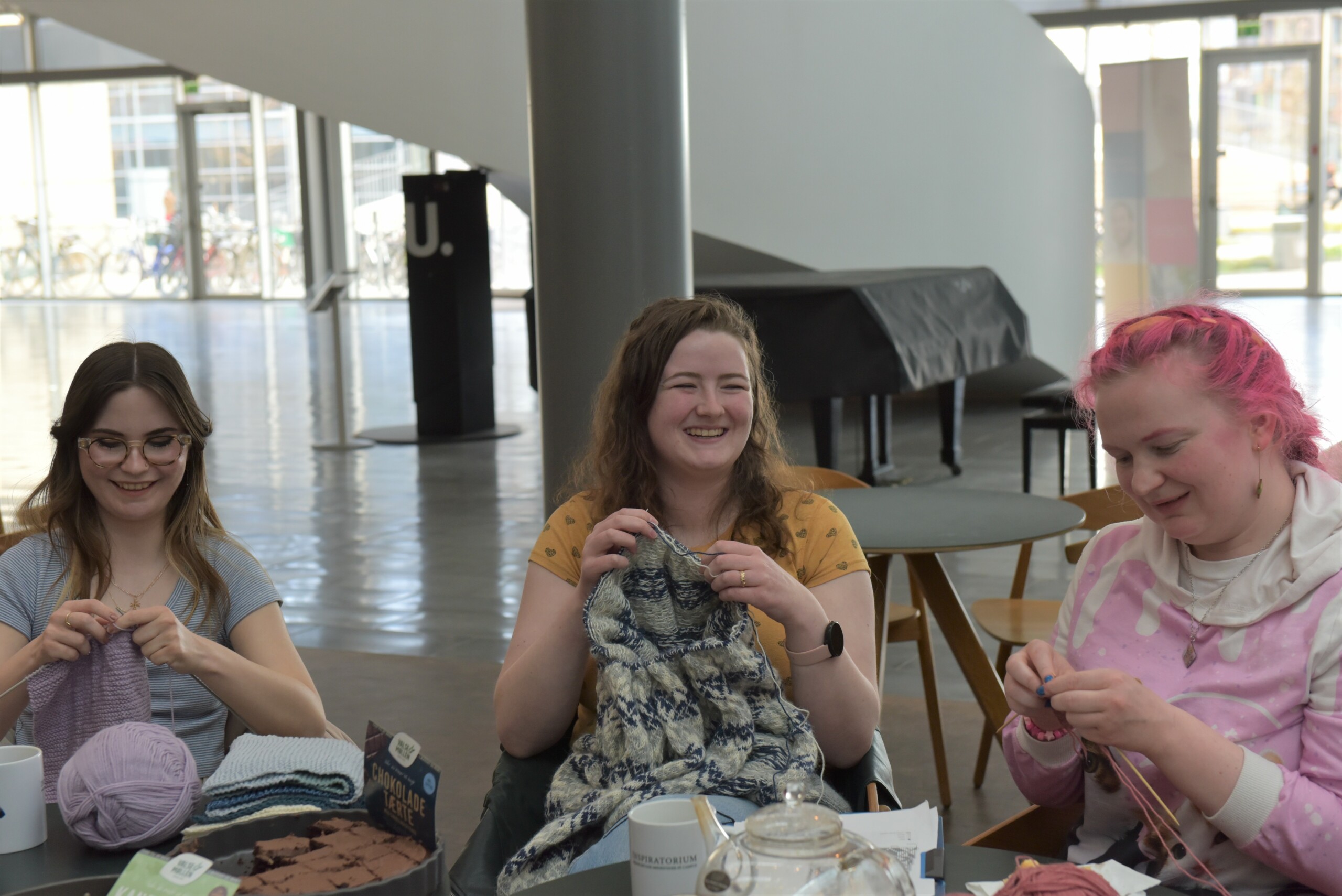 Clubs — Every day, on the different campuses of the University of Copenhagen (UCPH), Kamille offers cake and tips on needlework. In the interdisciplinary knitting club, things move in a quiet, calm rhythm. It is enough to just be there and knit.

Kamille Kømler sticks her hands into her suitcase and soon has both arms buried in yarn and knitting needles.

»This is the magic suitcase,« she says with a smile, and adds that she has enough knitting gear for anyone who wants to get involved. She is a facilitator for the Interdisciplinary Knitting Club, that can be found every week at both the South Campus, North Campus and the Panum Institute.

Who: For anyone who loves needlework or who wants to learn it. There are enough knitting needles for everyone, but remember to bring your own yarn.

Where: At South Campus, North Campus and the Panum Institute.

When: Mondays at South Campus, Wednesdays at North Campus and Thursdays at the Panum Institute.

So what now: Stay updated on the club’s Facebook page.

Today it is Monday, and in accordance with tradition, Kamille Kømler has dragged her magic suitcase over, and has folded out a large banner in the main hall in the KUA building 13A on South Campus. There is cake and tea on a table, and water gently babbles into the hall’s pond in the background. A small, peaceful, afternoon retreat.

Five students have set up camp around the cake table where they share tips with each other while they immerse themselves in their own knitting projects.

»I’m just crazy about needlework,« exclaims Signe Birch Jensen and displays her earrings that depict a needle and thread. They dangle from her earlobes every time she moves the needles. 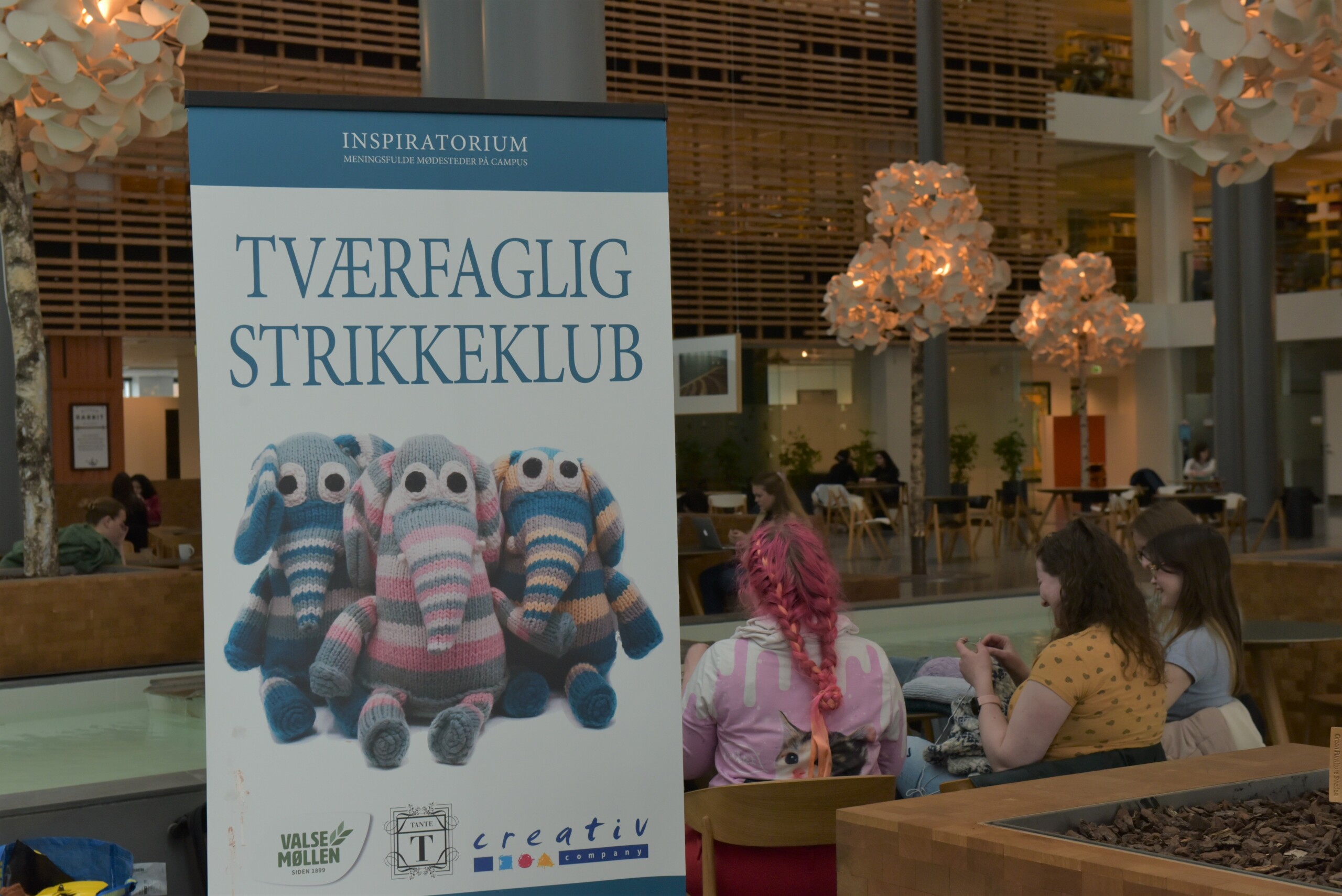 Thanks to the banners, you are never in doubt where the interdisciplinary knitting club is.
image: Anne Ubbesen

The above mentioned Signe Birch Jensen, who is studying for her master’s degree in Asian studies, is in the process of knitting an elephant. The small toy animal will have a round belly, head, and snout.

»We collaborate with the Mødrehjælpen mothers’ support group, where we knit elephants and scarves which we donate to them,« says Kamille Kømler, who points out that you can easily knit things for yourself at the same time.

Karna Klausen Herland is a student of English and shows off half a sweater, and a blue-patterned ocean unfolds in front of her. She has been working on it for a long time. »I am very proud of it,« she smiles and knits on.

»Yes, many people knit their own clothes,« says Kamille Kømler, and adds that the club makes use of recycled yarn, which people donate from lots of places. »In this way, we have a bit of a sustainability theme going for us.«

Knitting, an alternative to nights out drinking

Kamille Kømler got the idea for a knitting club last autumn when she was doing her internship. She wanted to bring people together in a community outside the usual Friday bar.

»We would like to include everyone, and those who turn up are all very different. There are many that go to the Friday bar, but there are also many who don’t really like the alcohol culture,« she says. Signe Birch Jensen nods. 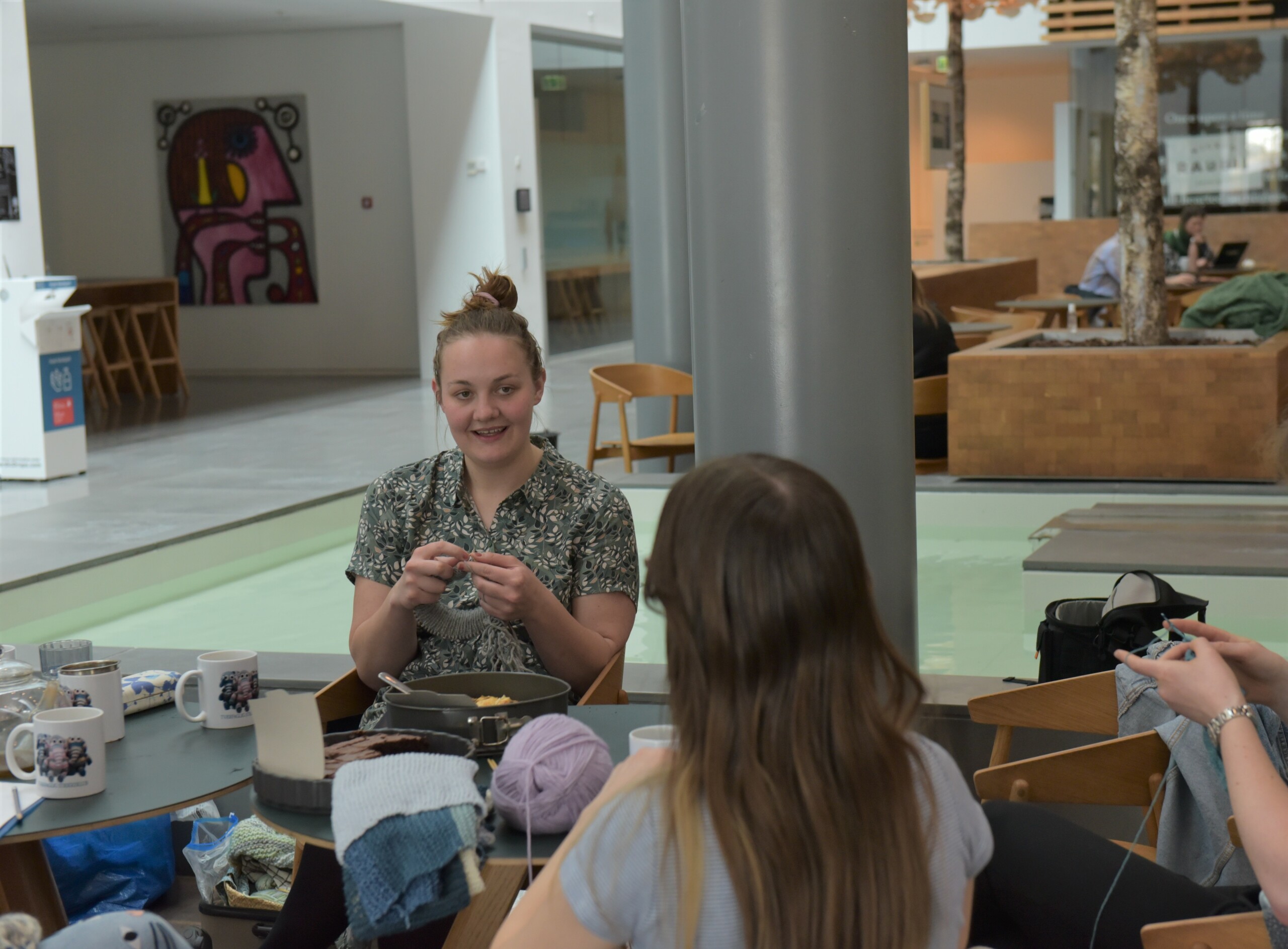 »The focus here is allowed to be on something other than alcohol. It’s nice that you can sit and socialize, and talk without some kind of guilt trip because you are not drinking,« she says, as Karna Klausen Herland looks up from her sweater project.

»It is also a way of getting into a community. To go to the Friday bar on your own is a big project,« she says, and she explains how she in 2020 moved to Copenhagen in the middle of the corona lockdown and did not know anyone. »And so you are just turning up at the bar events hoping that there are some people to talk to. This is much easier.«

The number of participants in the knitting club’s weekly events varies. Sometimes it’s five, sometimes 15. Some show up with a friend, others come alone and join the flock.

»There are some that don’t say anything for three hours, but who just listen, and participate in this way. And then there are some – like me – who yap on a lot,« Kamille Kømler laughs. »There is certainly never an awkward silence.«

A class in mindfulness

Around the table in the big hall, people are digging into the cakes. Kamille Kømler has baked a cake, and you can choose between cinnamon rolls and chocolate cake.

A student drops by. She can’t knit, but she likes cake, and the knitters encourage her to settle down. Meanwhile, Sine Madsen says she has started knitting at her law lectures.

»It helps me focus and maintains my concentration.«

Sine Madsen learned to knit last February when she first showed up in the knitting club. Today – just two months later – she is a skilled knitter, and her knitting gives her a state of mind that she uses in her lessons, and when she watches TV with her roommates. 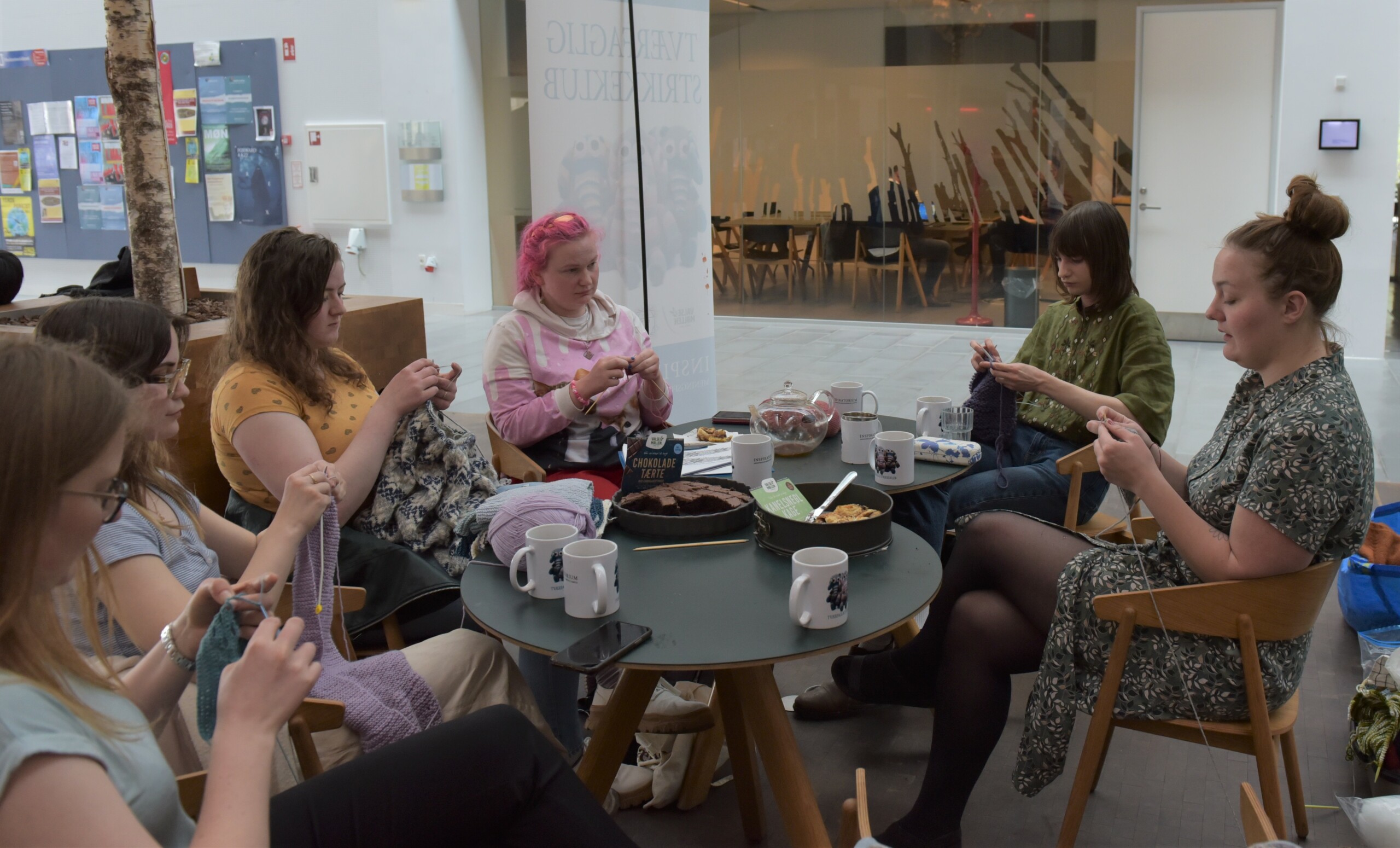 »I think that knitting for many people is linked to mindfulness and mental health,« says Kamille Kømler. »I personally find it difficult to concentrate, so I have to have something in my hands to relax.«

The use of her phone has gone down since she started knitting, and she asks the others if they were more calm also. They are.

»I hoped to be able to pass on this mindfulness to others when I started the project. It gives you the time to sit and knit, and you don’t have to focus on a lot of other things. You are not so busy with everything.«

»And it’s really something that feels productive,« Signe Birch Jensen adds.»When you have knitted something, you have ever so slightly changed the universe. It has one more sock!«