Where are the exits? New UCPH video on evacuation 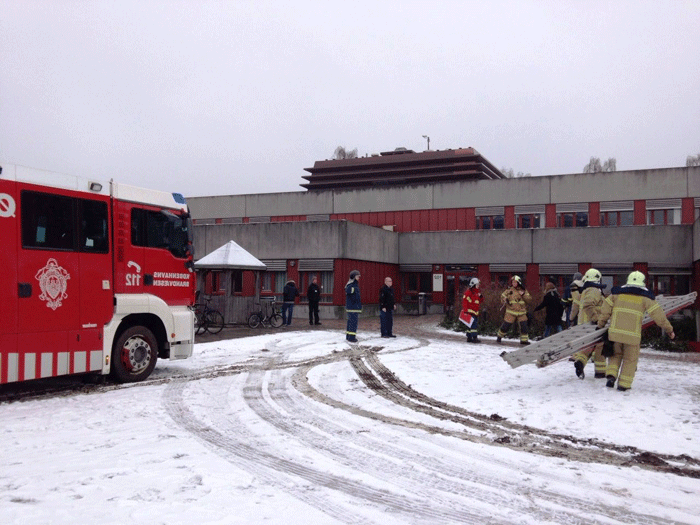 From a 2013 electical fire at the Faculty of Humanities which forced everyone to be evacuated. New video is to raise awareness
image: Lars Juul Hauschildt

Fun cartoon to create awareness about a serious issue. The University Post talked to safety and security chief about preparing for emergencies

When the disaster happens, you will know what to do. At least now you won’t have any excuses.

This is after the University of Copenhagen (UCPH) has put out a new video showing students and staff how to evacuate the buildings in an emergency.

So the University Post asked the UCPH Head of Safety and Emergency Management, Tommy Bøgh Silleman, if enough is being done to ensure the safety of students and personnel.

Why the video?
“We were sure that the staff was informed, but we were not so sure about the students. That’s why we came up with the concept that we use in the video, instead of using actors, we used a different method. The goal was especially to reach out to the students”, Tommy Bøgh Silleman says.

Is enough being done?

Do staff at the University of Copenhagen receive any formal training with regard to evacuation and emergency procedures?
“Yes, once a year all of the faculties have to have an evacuation drill. The drill has to include students and staff, as that is part of the policy we have”.

Do the current procedures assure safety and security?
“I think so. It is a tough situation because we have almost 10,000 employees [and 40,000 students, editors note] at the University of Copenhagen and it’s tough to make everyone understand everything. That’s why we are creating awareness. I think it is working and if it [a disaster, ed.] happens I am sure we will be prepared to deal with it”.

How do you know for sure that it’s working?
“It’s a long story, but for example if you open a Danish newspaper you won’t find a lot of stories, about fires and other kinds of such disasters. It is partly because of the procedures that we use. I feel in my stomach (gut feeling) that it is working”.

Teachers are expected to be evacuation managers and know the escape routes and other emergency procedures. Do teachers know that this is expected of them?
“When teachers enter an auditorium we expect them to make themselves aware of their surroundings. We expect them to be aware. I hope that they are given this information and told to do this and watch the video. We expect them to play this video [to students, ed] on the first day of university”.

Do they know it?
“It used to be the same procedure before. We gave them a CD that included safety and emergency procedures that they were supposed to show their students and I expect them to do the same with this video”.

It’s mentioned in the video that none of the staff are pre-selected to be responsible for carrying out evacuation procedures. Would extra training of some staff members be a good idea?
“I think it would be a good idea, but it is very difficult because we have so many employees and they are spread across a huge area. It would be a big task. That’s why we have this concept that the person who is closest to the evacuation station should be the one to lead.”