Winning ’team’ was actually one man 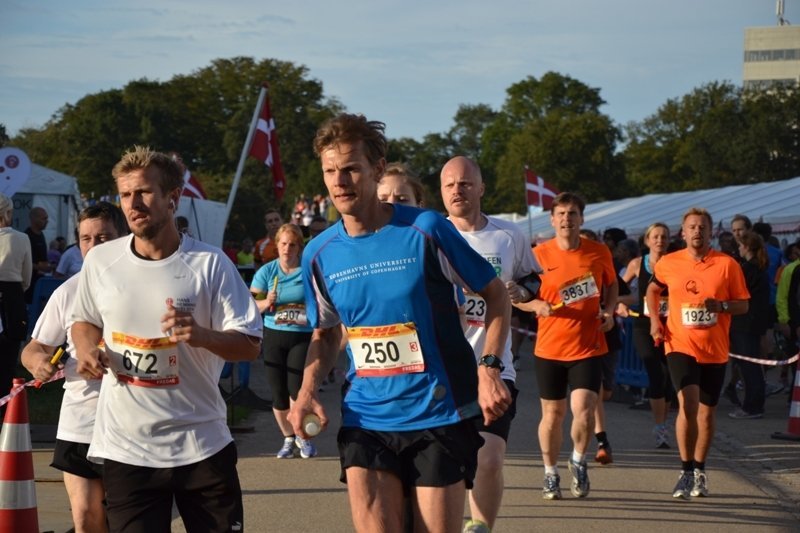 High energy physicist Kim Splittorff (right) 'thoroughly enjoyed himself' on his 25 kilometre slog through the thousands of other runners, he says
image: Mariana Bolano

The ‘team’ from the Niels Bohr Institute that was the fastest UCPH team at DHL was actually one man, Kim Splittorff, who ran all the 25 kilometres.

This is the latest development in an ongoing story, as the results and post-race interviews are conducted after the 5×5 km relay race Friday. [He has now been disqualified from the team competition, see below, ed.]

The DHL race, a run-for-fun event with heavy University of Copenhagen participation by staff, scientists and students, is highly competitive at the top.

Wanted to focus on star physicist

Yesterday Monday, the second place finishers, were relegated after it became clear, that they unintentionally were pushed to the top of the ranking after only running three laps.

Kim Splittorff, a 39-year old high energy physicist, explains to the University Post that the decision to have him run the whole race, and not send a team, came on the spur of the moment. They had bought the numbers, but it subsequently became clear that the DHL race was on the same day as a big event for the Niels Bohr Institute, the celebration of physicist Holger Bech Nielsen, he explains.

»We didn’t want to take away from the focus on the reception for Holger Bech Nielsen,« he says, adding that the ‘Blasting Branes’ name for the team, is inspired by String Theory terminology.

Kim Splittorff is a runner who is good for 16 minutes 5km, 33 minutes for 10 km, and 2:37 for the marathon, and says that »at this time of year I am normally in reasonable shape«.

Running the whole relay race entails running directly through the relay transition zone, while other team runners fan to the left and right to give the baton on to their teammates.

This, small, advantage of not having to change over, is vastly counteracted by having to run five times through a gruelling, smoke-filled, twisty course, accelerating and decelerating past slower runners.

For Kim Splittorff, Friday’s race was in place of his normal weekend run, and had no problem with all the grill smoke.

»It was nice with all the people, I actually found it inspiring, and the smoke didn’t bother me. I thought the problem was not as bad this year, and I liked the changes to the route,« he says, adding that it was »a lovely evening«.

He says to the University Post that he at one point saw another UCPH team ahead of him, on the first lap, [Probably elite runner Nørager, running first leg for ChemBiol, ed.], but no other competitors, except lapped backmarkers, since.

Other teams in the UCPH’s internal competition face the disadvantage of having to fill out five spots, resorting to non-elite, slower, runners.

Kim Splittorff himself would gladly give up the honour of being the fastest UCPH team, and will accept a decision either way.

»I think the ChemBiol team [now reckoned to be first place, ed.] should get the prize, as they fought together as a team,« he says.

But a hypothetical decision to relegate the Niels Bohr ‘team’ from first place only brings on new complications however: ChemBiol, an eventual new ‘winner’ had one of their runners running twice.

[Update: Organiser Niels Wollesen says to the University Post that Kim Splittorff and his team have been disqualified from the team competition, but that he will receive a special prize. ChemBiol, third past the finish line, are now considered the official ‘fastest team’, ed.]

For Kim Splittorff, the event is a fun, social, thing, and adds that he himself hopes that a solution is found to this intricate problem of fairness for future reference.

»Either way, it is good that the University Post is covering this story,« says Kim Splittorff.

See if our photographer caught you in action in our gallery of Friday’s DHL run: If you’re not here don’t despair there are lots more photos on our Facebook page Part One, Part Two, Part Three, Part Four and finally Part 5