Women scientists lag behind the men in salary race 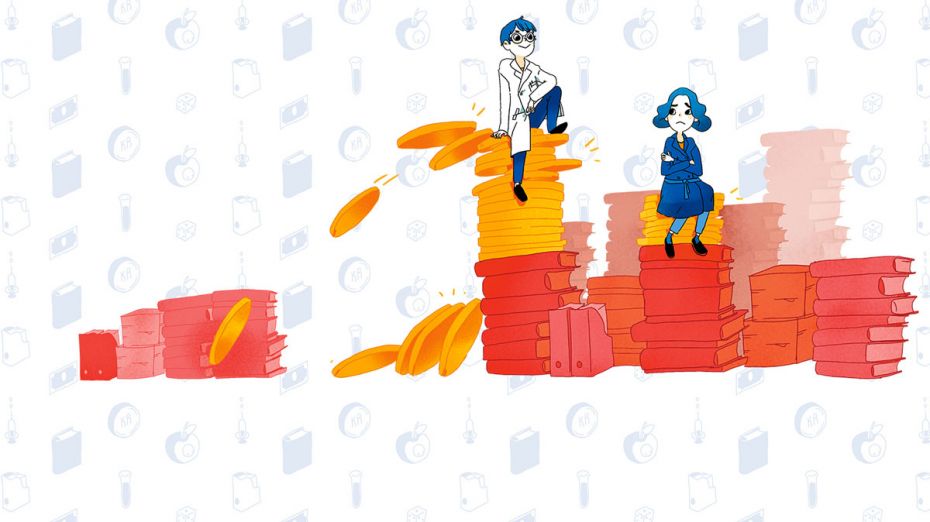 Many of them move away from, or are not able to pursue, an academic career. Now Uniavisen has requested and received new data showing that female researchers that get jobs as associate professors or professors are also disadvantaged in terms of salary.

Best to be a male doctor

A top ten over the highest paid scientists at UCPH confirms that it is good to be a man and to be doing research in health science. Eight out of the ten scientists on the list are employed by the Faculty of Health and Medicine, and only one woman, Jytte Banner, has sneaked onto the list with tenth spot for her annual DKK 1.22 million salary.

She explains her salary with the fact that she as a forensic scientist is on call every third week, where police can call her out to crime scenes, and she may risk having to examine victims of violence or be sent out on tasks of identification at disasters.

Jytte Banner thinks that men earn more because they are better at ’selling’ themselves and their research projects.

”My best guess at explaining the discrepancy is that the determination of the qualifications required is male-dominated. I think research time has been progressively ‘professionalized ‘ or rather commercialized at the expense of the good ideas, the creative and innovative, and the wider more comprehensive ideas, which might be closer to women,” she says.

Hanne Nexø Jensen, an associate professor at the Department of Political Science at UCPH whose research has included the the gender impact of changes in government organizations and gender in academia, agrees that the wage gap can be partially explained by the researchers’ success in obtaining external funding. That is: Money for research from public and private foundations and from corporations.

The relationship is a simple one: The more funding a researcher can provide, the easier it will also be get paid more in the form of one-off bonuses and performance pay.

There is a lot of money in health science research to apply for. But most women research in other fields. “The money and the women are not in the same places,” says Hanne Nexø Jensen .

Part of the salary difference cannot be explained

The trade union DJØF’s equal salary analysis from 2015, that compares the salaries of men and women public employees, shows however that women are paid less than men, without there being a logical explanation.

In the group of public servant non-management DJØF members, women have an average salary that is 97 per cent of men’s. 60 percent of this wage gap can be explained by men’s higher seniority, a higher proportion of chief consultants, and different areas of employment. But 40 percent of the pay gap, or 1.2 per cent, cannot be explained by the observable characteristics.

“When the unexplained portion of the pay gap is greater among universities than, say, among state employees, it’s probably due to a lack of transparency. Most significantly health science is a large private market, providing good opportunities for seeking significant external funding. The existence of lucrative alternative career paths in the private sector also contributes to a higher salary at the Faculty,” says Edith Jakobsen, head of working life policy at DJØF.

According to DJØF, a professor’s salary depends on his or her experience, scientific publications, ability to attract external funding, network, and teaching results.

Since the first female professor at UCPH, the historian Astrid Friis, was appointed in 1946, the proportion of women professors has increased slowly but steadily from 15 percent in 2007 to 22 percent in 2015. But associate professor Karen Sjørup, gender researcher at Roskilde University, does not believe that the wage gap will decrease as more women become professors.

In health science, for example, women tend to specialize in areas that are less career-oriented and which are overlooked by the men. “The interesting question is whether women opt out themselves, or whether they are de-selected. Men reflect each other and promote each other’s careers. They are drawn into a career pattern with stiff competition and a lot of travel, where women often find it difficult to keep up,” says Karen Sjørup .

Mette Sandbye, professor and head of department at the Department of Arts and Cultural Studies at the Faculty, does not believe that the gender pay gap is okay.

“It is an issue that we have only become aware of lately at UCPH,” she says.

The problem at the Faculty of Humanities is that the faculty has been hit hard financially. There is virtually no money. And unlike the health and natural sciences, there are not as many big foundations to apply to.

“We won’t, for this reason, be able to compete with the salaries at the Faculty of Health and Medicine, but I would like to see that we had larger salary brackets, so we were able to attract and appreciate the best. It is the academic commitment, and not the pay that gives me and most of my colleagues job satisfaction. But there is not much to aspire to at the Faculty of Humanities, once you have been made associate professor, often at a mature age,” says Mette Sandbye .

She adds that it is difficult to find the money to hire lecturers at the moment. The choice is often between giving a young promising researcher the chance or giving a professor more pay. And she personally chooses the first option.

UCPH stakes it all on recruitment

Rector Ralf Hemmingsen does not believe that the wage gap between male and female professors and associate professors at the University “is very worrying”. And he notes that it is not a specific UCPH problem. He points out that female professors at the Faculty of Law and the Faculty of Science get a marginally higher average salary than their male colleagues, and the salary gap is down at two to three per cent in the men ‘s favour on most other faculties.

“I think we have come a long way with equality at UCPH. We are quite close to equal pay as the salary gap is marginal, but we must be kept aware of it. We will consider doing an analysis in a few years time, but I do not think that the time is right to use resources on it right now in these times of austerity. The problem is that it is always an individual wage negotiation. So I encourage both genders to get into the game and their skills make visible when they have to negotiate,” says Ralf Hemmingsen.

Rector emphasizes that the university wants to ensure that the research talent of both genders is represented.

“The big gender problem is that fewer women than men get top academic positions. That is where we should start,” says Ralf Hemmingsen.

The initiative was controversial, but was maintained as planned for 2013.

The current Action Plan for Career, Gender and Quality – Equal opportunities in research and management, which is in force from 2015 to 2017, brings on a number of new initiatives.

They include the set up of search committees to uncover opportunities in finding Danish and international research talent of both sexes. In addition, it is now required that there is at least one male and one female candidate when a professor, associate professor and lecturer position are to be filled.

Both genders must be represented in the appraisal and appointment committee, which should strive for gender balance.

In addition, all lecturers and associate professors who have been absent for at least three months because of maternity or parental leave should be offered a special agreement on their returning. A specific effort is to be made to create clear career paths at UCPH.