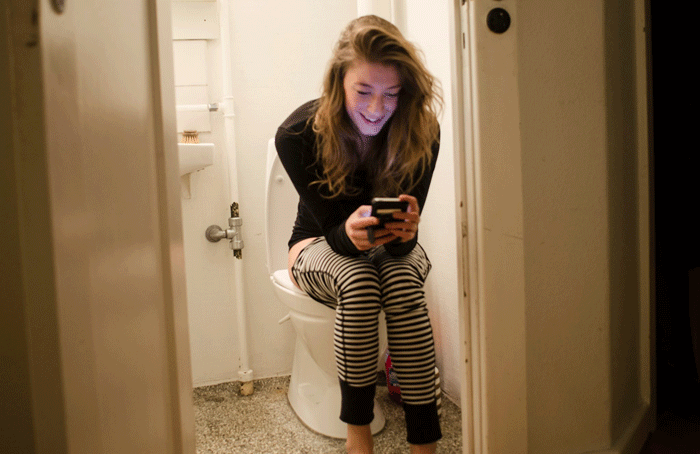 With Candidate you can find love in the most unlikeliest of places
image: Morten Heuser

‘Candidate’ matches you with potential partners based on your quizzing skills

Friday bars aren’t the fertile hunting grounds they’re made out to be. Unless you’re prepared to visit Moose and target the weak and sickly, you’re left to your own device: your smartphone.

Solely illuminated by its dim light, comfortably snugged under the covers of your bed, this brilliant thing allows you to reach out into the world and grasp for love without brushing your teeth or applying makeup. Loneliness is a vile disease, and until now the preferred remedy was Tinder.

But if you’re tired of swiping through pictures of people posing proudly while petting drugged up lions (a strange Danish thing), you’re in for a treat. Candidate is here!

This new love application crushes the superficiality of its rivals by turning everything around. With Candidate, one person sets up a three-question-quiz and wooers answer these questions to the best of their abilities. The quizmaster then rates the answers, without ever knowing the names or faces of the people behind them, ultimately finding a champion, a face, and possibly a date.

Win the quiz for adoration

University Post asked two experienced Tinder users to find out how the digital mating dance changes when you match with your significant-other-to-be based on personality, not looks. Marie and Martin have been using Tinder on and off for some time, and know every aspect of the Tinder game. With Candidate however, a few things differ.

The main difference is how fun quizzing for affection can be. You have infinite opportunities to astonish your future spouse with well worded advances. With picture-based dating apps, the matches (and thus, the right to woo) always goes to the one who’s better at angling their face so their cheekbones look dead perfect. On Candidate, this right falls to whoever’s the smoothest writer.

“It’s a really cool feature, because you’re sorting people based on personalities, not pictures. The downside is that sometimes, you put in a lot of effort in your answers only to be presented with someone who’s just not your type,” Martin says.

For Martin, who’s not too shabby at launching lines and following them up with well-oiled conversation, this new set-up is perfect.

“There really doesn’t seem to be that much competition. I know it’s not possible to determine, but I think a lot of guys are just throwing dick references and booty calls around. If you just answer the questions with more than a single sentence, you often win,” Martin says.

Unfortunately, Marie is not having the same amount of success here as she is on Tinder. Granted, she’s a photo wizard and knows how to apply a filter, which is probably why she is having a harder time adjusting to the new game.

Candidate matches users based on their answers to personalised quizzes

“I’m just not getting picked! I guess I have to up my game a little. Perhaps I’m scaring people away with my aggressiveness. They probably think I’m some kind of bar-wench!”

Both testers prefer taking the quizzes rather than creating them, and both admit ‘winning’ a match on Candidate is superior to the feeling you get on other dating apps. You’re not just granted the match because of your pearly whites and tan: you’re actually hand-picked from a group of four contenders by a person in the other end.