Your definitive guide to the Mayan calendar 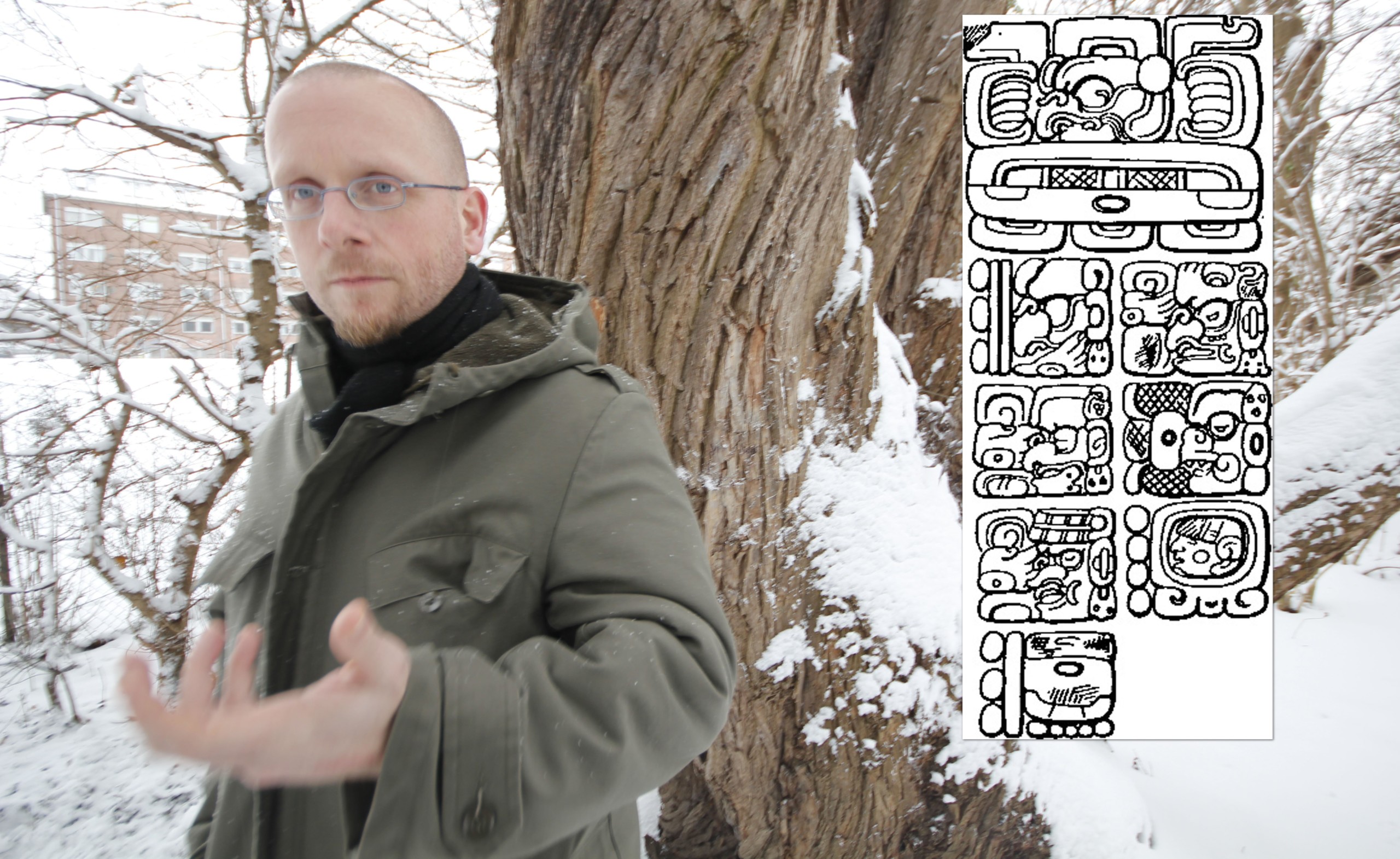 Jesper Nielsen in deepest Danish winter while talking about the Maya calendar. The weather here is more in line with the Vikings' conception of an 'end of days', he says to the University Post: 'A winter that never ends'. Inset: Inscription in the Mayan Long Count on the east side of Stela C from Quirigua showing the date for the last Creation.
image: Mike Young

No need to worry, says a Maya calendar expert, who freely offers University Post readers what they need to know before the long count ‘ends’ on 21 December

The hype will tell you that these days are the end of all days.

And for the paranoid among us, two ancient Mayan inscriptions – one of them only found this year – point to the significance of THIS date: In 1963, a Mesoamerican expert, and subsequently other scholars, wrote that the completion of this phase in Mayan cosmology, what is called the 13th b’ak’tun, means the annihilation of our present universe.

We want the technical details

Yes, we said it, the annihilation of our present universe.

Luckily, comfort is to be found with other experts on ancient Maya calendar systems. And this includes Jesper Nielsen, associate professor in American Indian Languages and Cultures at the University of Copenhagen. He has been doing the media circuit in recent weeks, mostly to deliver a comforting message: The world is not, actually, going to end.

But the University Post wanted something more re-assuring, more technical. We wanted to know what the calendar is, how it works, where it is inscribed, what it meant for them, and what it means for us.

»I don’t know if the date in our calendar has any particular significance. December 12, 2012 at 12.00 is also a candidate for this. December 21, of course, is the shortest day of the year for us, but that this day should fall on this significant Mayan date is indeed a coincidence.«

»But this said, you could easily find Maya epigraphers [inscription scientists, ed.] who would say that the significant day in the Mayan calendar falls two days later on 23 December, it all depends on what correlation you use,« says Jesper Nielsen.

So how do the Mesoamerican calendars work?
»The ancient Maya operate with three main calendars. The first follows the solar year’s 365 days, and relates to the agricultural cycle. The second is the 260-day ritual calendar, a calendar that is common to the whole Mesoamerican area, including the Maya,« explains Jesper Nielsen.

One interpretation of this second calendar is tied to the human gestation period, the period of a woman’s pregnancy. The day in which you are born in this calendar, says something about your destiny, your future. Will you succeed or will you fail?

Mayans would consult calendar priests before marriages, rituals, trading expeditions, and wars. Each day had a name, each day had a significance.

But in addition to these two calendars the Mayans had a long count calendar, and this is relevant to the 2012 phenomenon. Even though it is made up of long cycles of times, it has the appearance of linear time because of its long duration. Linear time, of course, would imply that time comes to an end at the end of the count. Cyclical, that a new count begins anew.

»Remember that when we talk about cycles of time, it does not imply that time will re-occur. We also have a yearly cycle without implying that the same thing happens on 10 December every year.«

The long count started in 3114 BC in terms of our own calendar. This was at a time, when there was no Mayan culture as such – the earliest Mesoamerican cultures come into play at earliest 2000BC.

»This is an indication that some Maya mathematician placed this event way back, and looked forward to the completion of this cycle,« says Jesper Nielsen, before adding a proviso.

»Note I say complete and not end. You could also use the word ‘fulfilled’ on the day corresponding to 21 December, which is the completion of a cycle of 5126 years«.

So what do they say, then?

So what do the Mayan inscriptions say to us about this specific date?

There are two inscriptions. And the deadpan, lack of drama, in these inscriptions is almost comical.

Take a deep breath here. It says: »This is the date when this cycle will be completed«.

Jesper Nielsen laughs: »There is no prophecy, no end of everything! There is no reference to the sky coming crashing down.

But why would they have to state that? Surely it is redundant unless it DOES mean something, otherwise they wouldn’t need to state this?

This tells us that they are not looking to the end of the world. They are dealing with things far off in the future, explains Jesper Nielsen.

»Maya rulers were eager to show themselves as part of a long tradition that has existed for thousands of years, and will continue to do so. This is what all power holders do«.

One Mayan scholar David Stuart deciphers an inscription talking a number of 72 octillion years. This is the number 72 followed by 27 zeros.

Maya fearful, yes, but so would we be

The two inscriptions are from the same time period, the late classic period 600-900 AD. One is on a stone tablet on the back wall of a temple. The other is on the rise of a stone stairs.

On one of them, on the Tortuguero monument in present-day Mexico, the deity Bolon Yokte K’uh is mentioned in association with the date, but it is unclear what his role is. This deity is related to beginning and completions of large time periods.

Adding to the present hysteria, the second inscription, La Corona in present-day Guatemala, was only discovered this year.

»We shouldn’t dismiss the idea that the ancient Maya had anxiety or fear of the end of the world,« says Jesper Nielsen, before adding:

»This is almost universal: had the ancient Maya been here today they would have had all kinds of rituals to make sure the transition from one cycle to a new one would go smoothly. But this is normal in any calendrical system. This is normal, anywhere«.

Human things, but they seem natural

Calendars are human constructs, but we experience them as almost nature-given, Jesper Nielsen says.

Like our own Y2K millennium mania going up to 2000?

»Yes, indeed! We ‘group’ time, and deal with it in that way. When we reach the thousand year period, for us using decimals, we get the doomsday prophecies. People imagine all sorts of things.«

There is money in fear

So when did this 2012 Maya calendar mania start?

»The idea has been spread by pseudo-scientists, who pay no respect to what the inscriptions actually say, and who don’t know how to read Maya. And this is actually an internet-driven phenomena.«

Marriage for one day

Come 21 December, Jesper Nielsen himself will be attending a Maya-expert friend’s wedding.

»It could… potentially… be a very short marriage!« he laughs.