100 years of Persian Studies at the University of Copenhagen 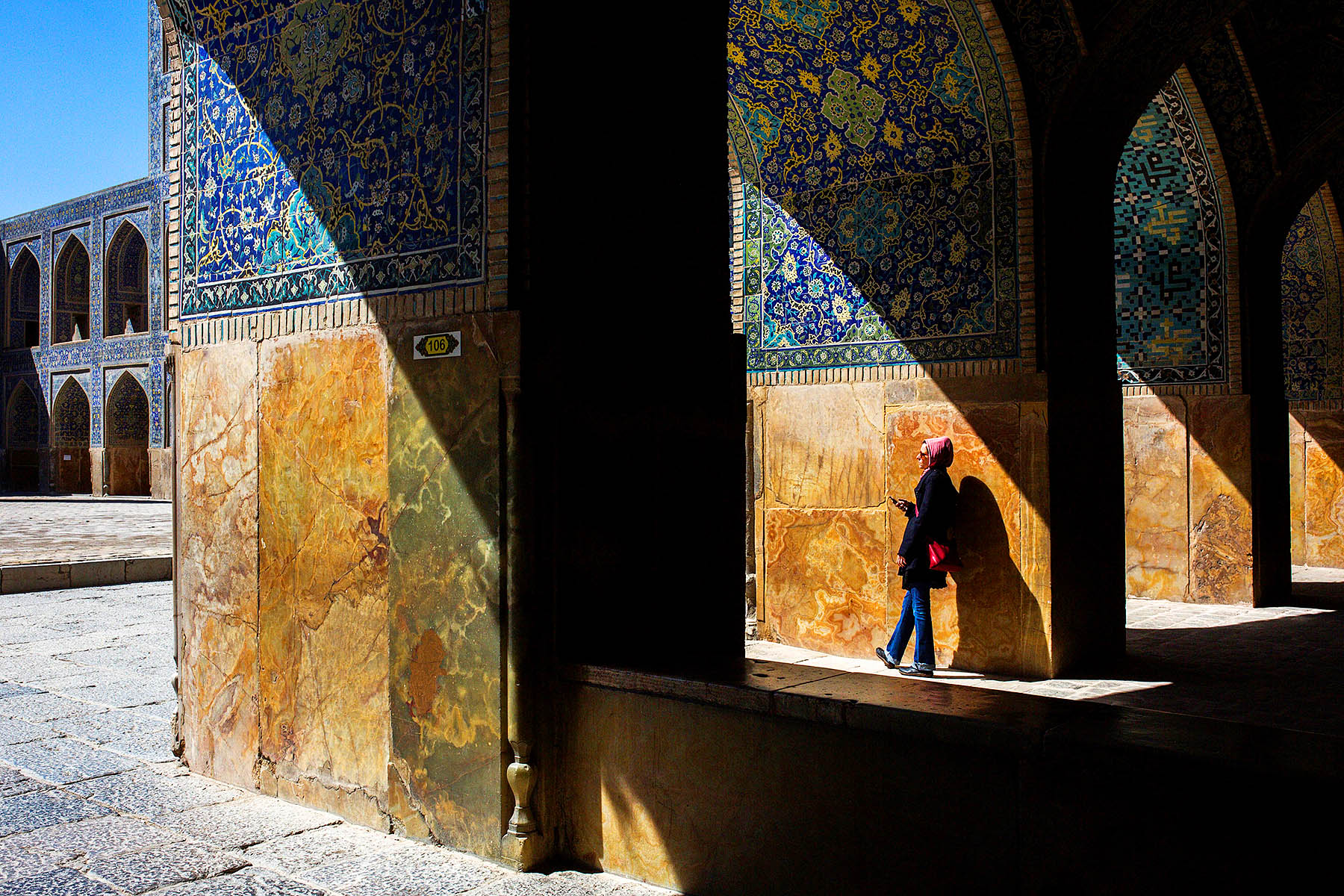 Iran is in possession of a vast historical and cultural treasure. But the small subject of Persian at the University of Copenhagen has its emphasis on modern Iran. The picture is also used as a front page illustration for the book ‘The Modern Iran’ by Rasmus Elling, an associate professor in Persian at the University of Copenhagen.
image: Ritzau Scanpix

Report — Not all the language-based small study programmes can boast a 100 year history. But Persian can. It’s longevity is partly due to the change in the subject's focus from the pre-Islamic period to the last 40 years of Iranian history.

Millions of people speak Farsi (Persian), but at the Faculty of Humanities at the University of Copenhagen, it is defined as a small language programme.

The study programme in Persian only receives approximately five to eight new students a year. But the subject has still succeeded in making it to 100 years in defiance of any cuts wielded by the politicians in parliament in recent years. Persian studies has survived.

This small triumph was marked by a symposium on Monday 6th May in an auditorium on South Campus in Copenhagen.

The auditorium was not packed. It is, after all, a small course. But the audience was entertained with anecdotes from 100 years ago from when Persian was called Iranian philology.

Ethnocentric founder – at the start

One of the lectures was by Mette Søltoft, who has a master’s in the Science of Religion and Persian Studies. She talked about Arthur Christensen, who is considered the founder of the Persian study programme in Copenhagen, and about his travels to Iran.

Arthur Christensen is now a controversial man in Persian Studies. While he is the founder of the study programme, he would be seen today as ethnocentric critic of Persian culture. He made a judgment, in other words, on Persian culture based on his own Danish standpoint.

On his third and last trip to Iran in 1929, Christensen had changed his perceptions. This is the trip that Mette Søltoft would like to talk about.

Arthur Christensen was also the first professor of philology at the University of Copenhagen, and the trip in 1929 was not only a milestone for him personally, but was also very important to the study of Persian in Copenhagen. Iran was then called Persia, and the country’s Inhabitants were called Persians. 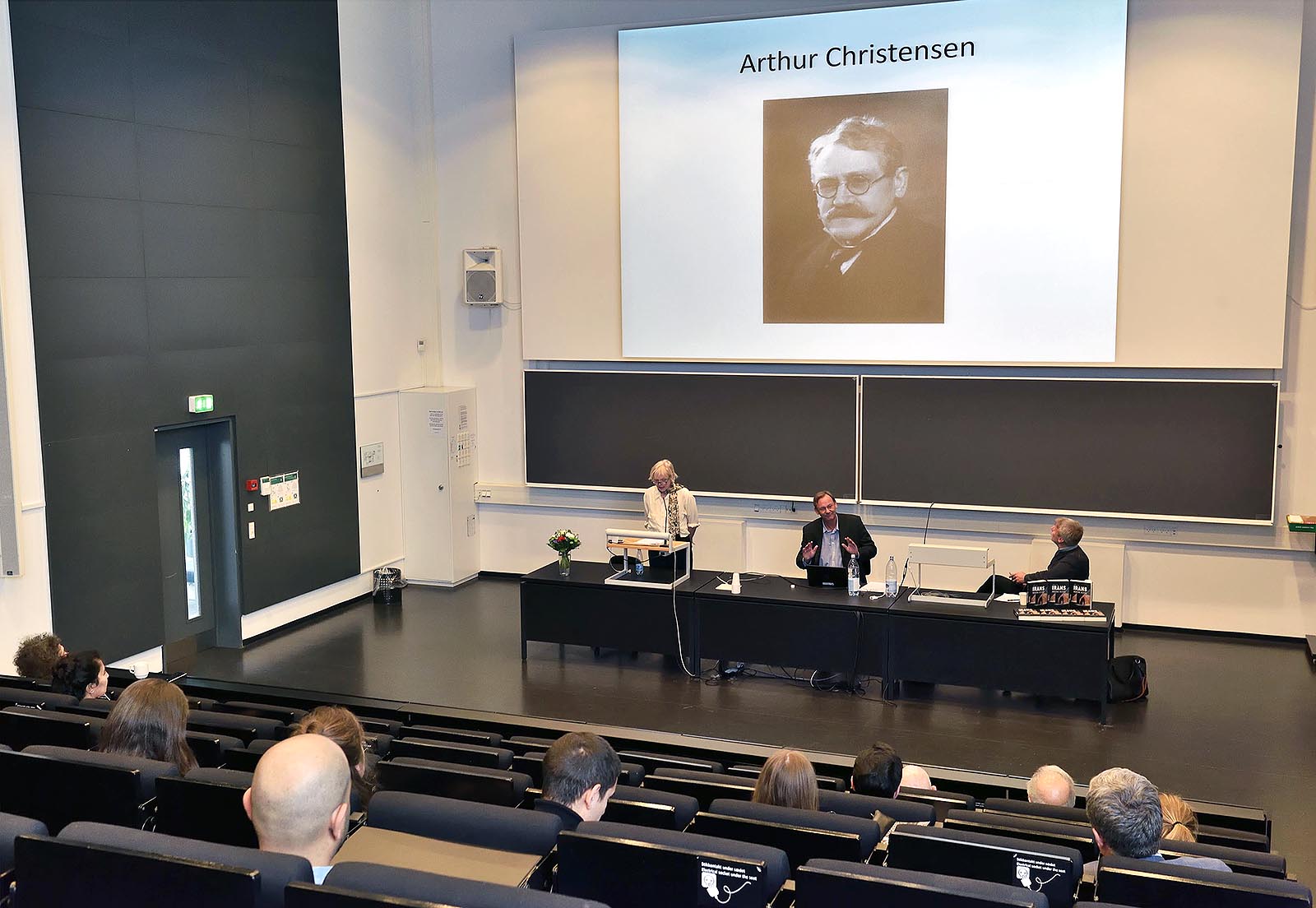 Mette Søltoft during her lecture at the 100 year celebration of Persian studies.
image: Anders Fjeldberg

»Many of the subjects that were studied in the rest of the 20th century – like the country’s pre-Islamic period, the country’s dialects, its history, literature and pre-Islamic religions – this was all established during the years when Arthur Christensen was professor,« says Mette Søltoft.

Søltoft illustrated just how much Arthur Christensen had developed his view of Iran by quoting from his diary from his first trip to Iran, in 1914, where he also had three assignments: To buy Persian manuscripts for the Royal Library in Copenhagen, to explore the dialects of the country, and to make an account of the ‘Iranians’ soul’.

»He dreamt of meeting exotic and colourful orientals in Iran, but he did not experience this at this encounter. Instead, he describes an impoverished population, and a politically and socially disconnected country. He did not give a flattering description of the inhabitants: They were lazy, backward and undeveloped. Arthur Christensen writes that the orientals were so conservative and so homogenous from century to century in their lives, spirit and thought, that even their music is characterised by strict simplicity and monotony,« Mette Søltoft said.

Iranians were anything but trivial

There was, in other words, a lot to criticize the Persians for in 1914, according to Professor Christensen. But all that changed during the 1929 trip. And according to Mette Søltoft, it changed because Arthur Christensen had never been invited in to the homes of the Iranians in 1914. He only met those who helped him travel around the country – and in 1914 Arthur Christensen was himself was blind to the fact that this gave him a distorted impression of the country he visited.

His trip in 1929 went quite differently – he immediately became close to some very enlightened, intelligent, and spiritually and culturally enriched people, who knew almost everything that was worth knowing about Europe. He came into their homes, and in this way Arthur Christensen’s view of the Iranians changed completely. 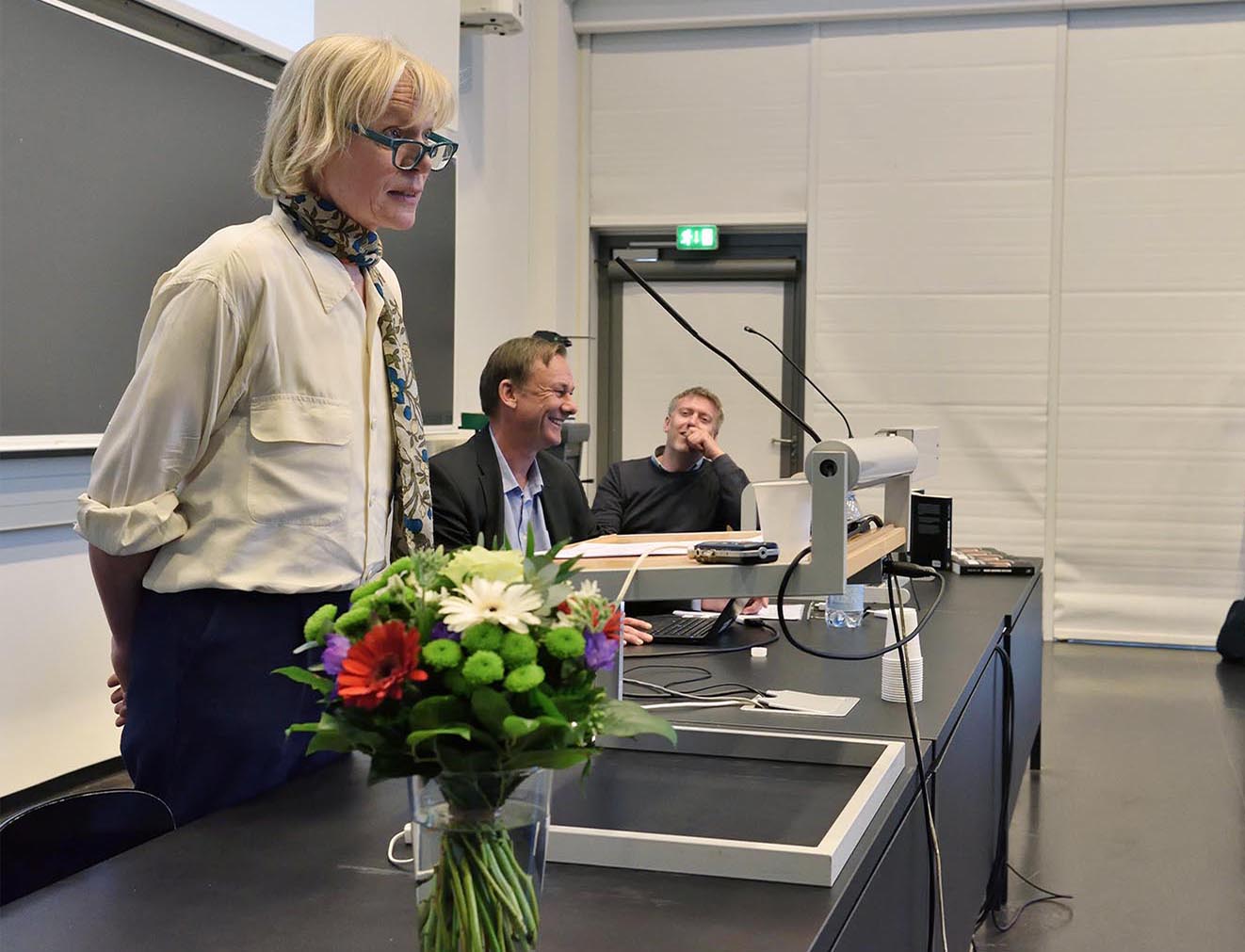 »They are not nobodies, but young, intellectual and cosmopolitan people who speak French, German and English«

He also carefully wrote down the names of all the people he met, and many of them later turned out to be prominent writers, students and politicians in 20th century Iran. Even the Minister for Education at the time, who Arthur Christensen met, appeared Europeanised in his way of thinking, Mette Søltoft recounted. And the course in Persian at the University of Copenhagen began to work closely with intellectuals in Iran.

They are not nobodies, but young, intellectual and cosmopolitan people who speak French, German and English.

At the time, according to the theories which were contemporary, it was in Europe’s own interest to know something about Indo-European Persia, because Iran had had such a major impact on the development of European history, religion and culture.

Persian has managed to adapt

Iran, in other words, won him over on closer acquaintance. But Persian as a study programme has, as one of the University of Copenhagen’s threatened small programmes been adept at adapting to the modern reality in Denmark.

Claus Valling Pedersen, associate professor in Persian at the Department of Cross-Cultural and Regional Studies, which is the home of Persian, also held a lecture on the development of the programme. The period after 1960 in particular – especially after the Iranian revolution in 1979 – is of interest to what the study programme has become of today.

The line taken by Arthur Christensen was followed in subsequent years. But after 1960 the structure of Persian was changed so that today more emphasis is placed on research and teaching in modern Iran.

The first Middle Eastern study programme saw the light of day in 2001, for example, with two lines. One focused on Iran’s society, history and politics. The other had a particular focus on Iran’s language and literature. This has not been done without a cost however – even though it may have saved Persian from the death of the small subjects. 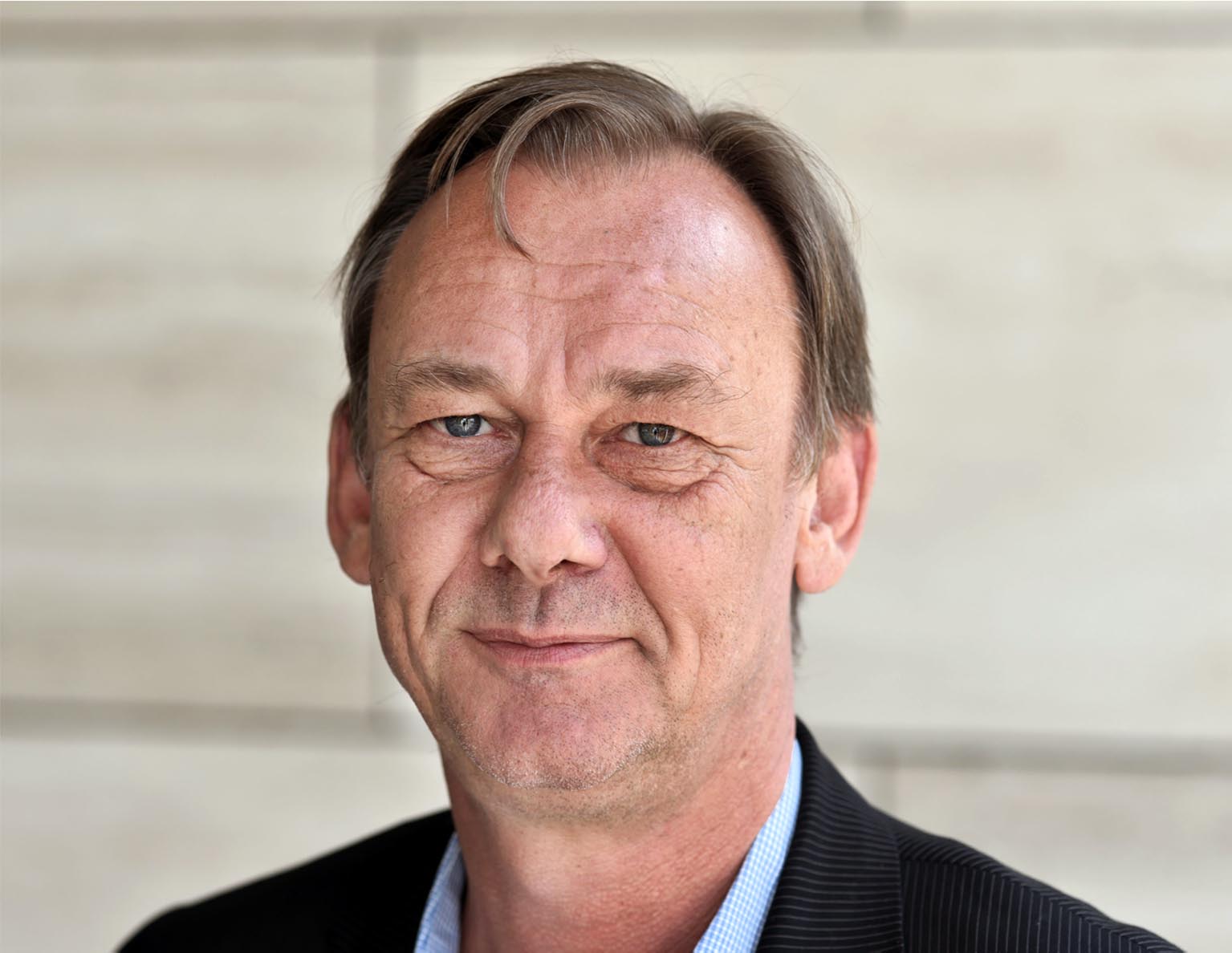 Associate professor in Persian Claus Valling Pedersen is currently spending a good deal of time communicating to media. It is time well spent, because he thinks it helps to preserve the future of the subject of Persian.
image: Anders Fjeldberg

Associate Professor in Persian Claus Valling Pedersen is currently spending a good deal of time communicating to media. It is time well spent, because he thinks it helps to preserve the future of the subject of Persian. Image: Anders Fjeldberg

»The changes have not necessarily benefited the students, as they have lost skills in Iran’s history and culture. But they have, on the other hand, ensured the survival of Persian – along with other small programmes like Turkish and Hebrew,« said Claus Valling Pedersen.

»Communication is now very important to us. We spend quite a lot of time talking to journalists, speaking in radio broadcasts, giving lectures and consulting private companies and ministries.«

The employees on the Persian programme still, however, need to spend most of their time doing teaching and research.

Persian Studies, is financially secured, because the course receives a special subsidy on the Danish government budget every year.

At the symposium, in addition to Claus Valling Pedersen and Mette Søltoft, there were contributions from Jesper Kallestrup, Dean of the Faculty of Humanities at the University of Copenhagen, a submission from the Danish ambassador in Tehran Danny Annan. There was also a talk by Shaul Shaked, professor emeritus of Iranian studies at the University of Jerusalem, on how the Iranians over the years have perceived the countries north of Iran. In addition, Associate Professor at Cross-cultural and Regional Studies Rasmus Elling gave a talk on the structure of the study programme on Iran today.