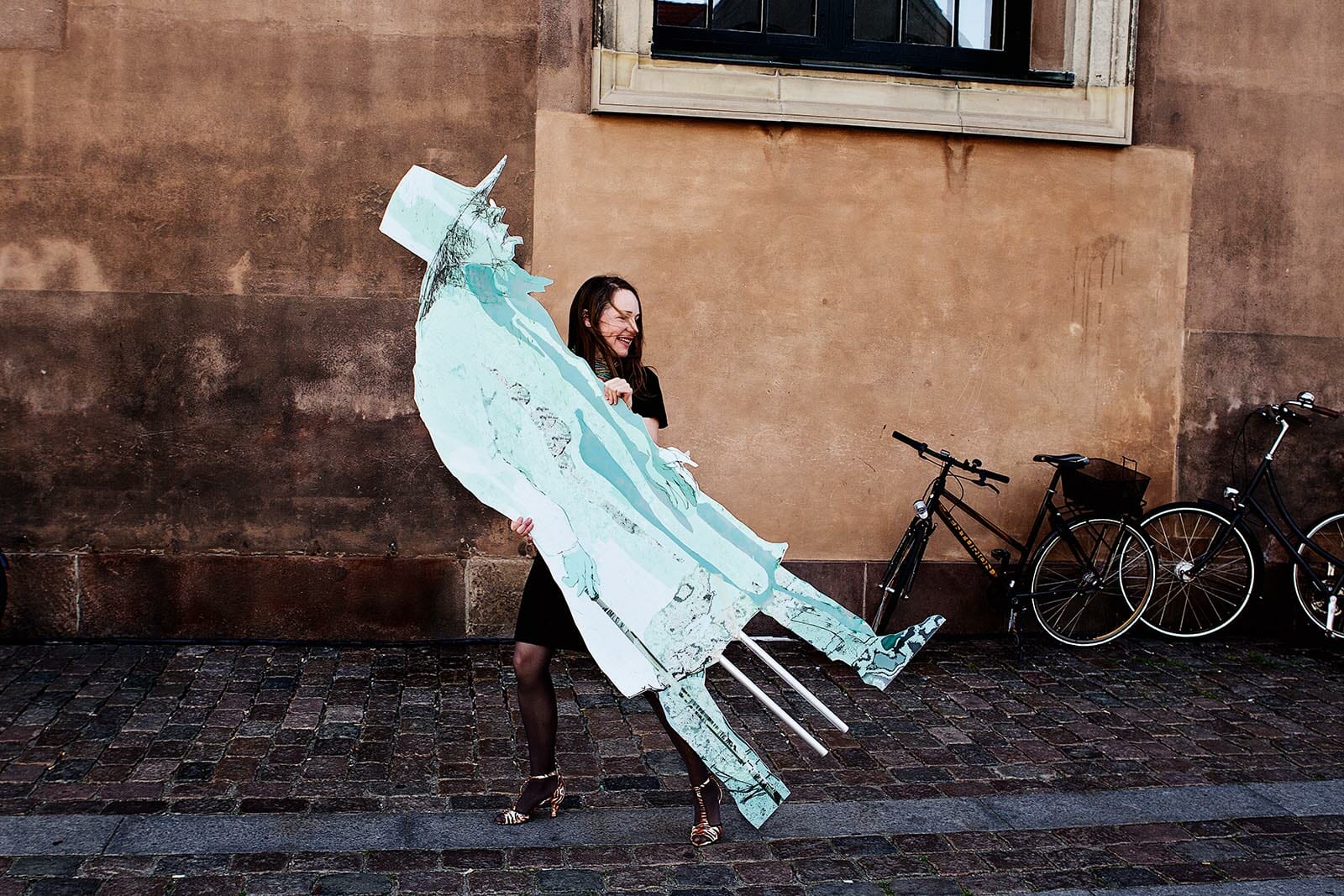 Alumni — You may know Kierkegaard, Ørsted and Grundtvig. But what about Halfdan Mahler, Corinna Cortes and Rasmus Rask? These 15 University of Copenhagen (UCPH) figures have made their mark on the world. Here is the bare minimum of trivial facts that you need to know about them.

The thinker with the largest influence on Danish intellectual culture is no doubt the philosopher and theologian Søren Kierkegaard. After graduating in theology, he released his first work ‘Either/Or’. His writing consists of 40 books and a large number of newspaper articles that deal with topics such as religion, Christianity, psychology, anxiety, and love.

He published several of his works under a pseudonym to make the reader reflect over them without prior reservations. Kierkegaard was one of the main characters in what has been dubbed the Danish Golden Age with Hans Christian Ørsted, Grundtvig and Hans Christian Andersen. Works such as ‘Eighteen Edifying Discourses’ and ‘Works of Love’ are translated into more than 15 languages ​​and have influenced a large number of philosophers throughout the world.

Known for: His extensive writings and his contributions to existentialism.

Tycho Brahe is considered the founder of modern astronomy. He began to study law at the University of Copenhagen as a 12-year-old, but inspired by a solar eclipse he started to study astronomy on his own. Later he helped to reform the field with systematic observations and advanced measuring instruments.

He set up two observatories on the island of Hven and helped catalogue the positions of more than a thousand stars. In 1573 his first book ‘De nova stella’ (On the new star) was published. When Frederik the 2nd died, Tycho Brahe broke with Christian the 4th’s court and ended up in exile.

Known for: Creating the most accurate record of the starry heavens through systematic observations.

Bonus Info: Lost the tip of his nose during a duel in 1565 and had to wear a prosthesis.

Hans Christian Ørsted originally trained as a pharmacist, but he was especially interested in chemistry and physics, and his research spread across several subject areas. Ørsted was much inspired by Kant and became a doctor of philosophy in 1799 on a dissertation on Kant’s natural metaphysics. In 1806, he became a professor of physics at the University of Copenhagen, and his discovery of electromagnetism was a sensation in the world of science.

H.C. Ørsted was an academic force of nature. He founded the Danish Society for the Dissemination of the Natural Sciences (Selskabet for Naturlærens Udbredelse) in 1824, and five years later Den Polytekniske Læreanstalt, now the Technical University of Denmark (DTU).

He emphasized the communication of scientific results and contributed more than 2,000 words to the Danish language (including hvalfisk = Cetomimoidei, type of deep sea fish, brint = hydrogen and varmefylde = heat capacity).

Known for: His discovery of electromagnetism and for being the first to isolate the element of aluminium.

Bonus Info: He was a close friend of Hans Christian Andersen.

He plays a crucial role in the history of linguistics – he almost has iconic status because he helped develop the subject area.

As a linguist, Rasmus Rask was a pioneer who traveled to Russia, India and Iceland to compare languages. In 1818 he published the first Icelandic grammar and, together with linguist Jacob Grimm, he formulated Grimm’s Law (a series of sound shifts that helped to cleave Germanic from the other Indo-European language lineages).

Known for: His contributions to linguistics and to Grimm’s Law (also called Rask’s Rule) 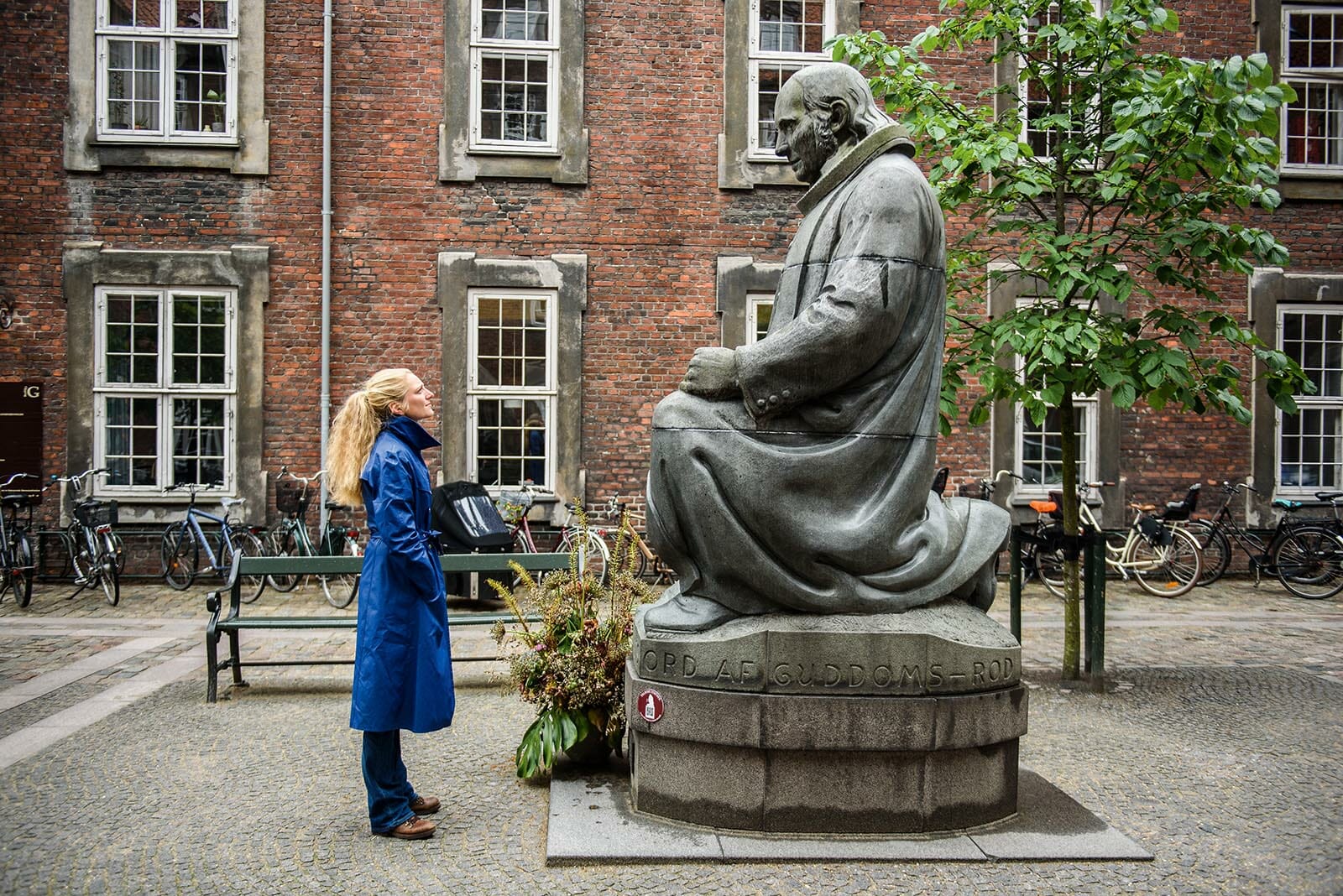 Nikolai Frederik Severin Grundtvig used to be an institution in Danish intellectual culture. He was a theologian, a philosopher, a philologist, a poet and a historian and has influenced Danish society in several fields. He wrote a large number of books and poems on Nordic mythology, Christianity, enlightenment and world history, but became especially famous for his 1,500 hymns.

Grundtvig introduced the idea of ​​’human first, then Christian’ – i.e. that life on Earth was just as important as life in paradise. This view of Christianity was later known as Grundtvigianism. In 1844 his thoughts on public education led to the formation of the world’s first folk high school in Rødding in South Jutland.

Known for: The pastoral, popular and political empowerment of the rural population. Founded the folk high school movement.

Bonus info: Was elected into the Danish parliament in 1848.

Alfred Lehmann was originally schooled as an engineer, but he moved into the field of psychology before he graduated. In 1886 he set up an interim laboratory in the basement of the Metropolitan School in Copenhagen, and three years later he received the Gold Medal of the Danish Academy of the Sciences for his dissertation ‘The fundamental laws of human emotional life’ (published 1892). He became professor in 1910 and his career spanned experimental psychology, perception and developmental psychology.

Known for: Establishing psychology as an independent science in Denmark.

As a theologian and professor, Harald Høffding helped to focus Danish intellectual culture on philosophy and the intellectual life throughout the 19th century. He wrote monographs on Hegel, Kierkegaard and Rousseau, and in 1870 became Dr. Phil. with his dissertation ‘The Ancient Conception of the Will of Man’. His publication ‘An Outline of Psychology Based on Experience’ from 1882 was translated into several languages ​​and made him well-known outside Denmark.

Known for: His contributions to association psychology.

Bonus info: Rector of the University of Copenhagen 1901-02.

One of the most famous legal scholars at UCPH, Frederik Vinding Kruse was professor of jurisprudence in the period 1914-50. His best known work is Ejendomsretten or ‘Property Law’ in five volumes, published 1929-33. Vinding Kruse contributed to the introduction of a modernized registration system in a real estate property act of 1926.

Bonus info: He was offered the post as Danish prime minister by the Germans in 1940, but he refused. 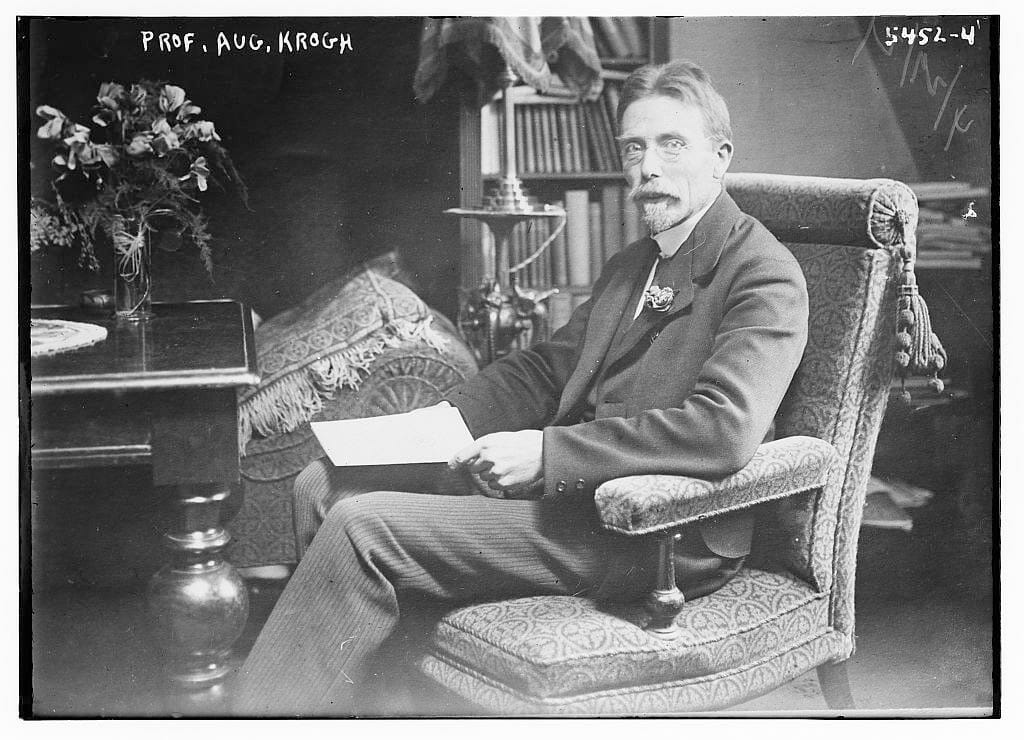 August Krogh was a physiologist, professor of zoophysiology, and one of the founders of modern sports and exercise physiology. In his research, he studied the oxygen supply to the muscles through the capillaries, giving him the Nobel Prize in Medicine in 1920. In 1922, he gained the rights for the production of insulin in Scandinavia and started the production of insulin in Denmark with the doctor H. C. Hagedorn.

Known for: Discoveries in physiology, including how the lungs absorb oxygen, and how blood is distributed to the muscles that most need it.

Bonus info: In 1970, the UCPH Department of Physiology, Biochemistry and Biology at UCPH was named after him.

In the 1950s, scientific research was primarily the domain of men. An exception to this was the seismologist and geophysicist Inge Lehmann, who graduated with a master’s in mathematics from the University of Copenhagen. She started in an administrative position at UCPH, but later became head of the Danish cartographic institute, which carried out surveys and produced topographic maps.

In 1936, she published the article ‘P’, where she argued that the earth had a solid core – not fluid, as previously thought. She became an honorary doctor at Columbia University and continued to work in the US after her retirement. Inge Lehmann died a 104 year-old.

Known for: Using data from earthquakes, she proved that the earth has a solid core.

Bonus info: She became honorary doctor at the University of Copenhagen in 1960. UCPH put up a sculpture to honour Inge Lehmann on Frue Plads in 2017.

I need you to know how many incompetent men I had to compete with – in vain. 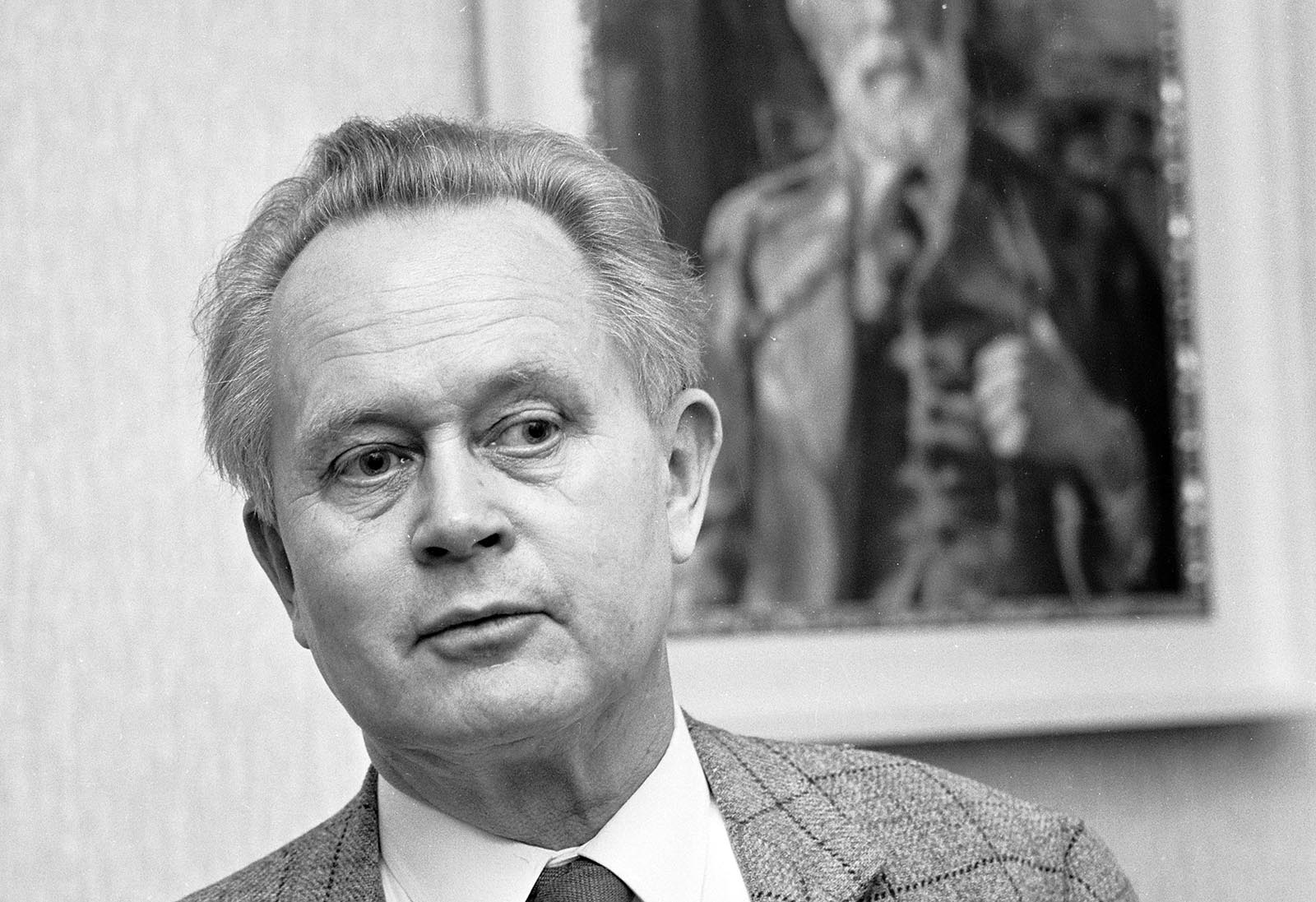 It is hard to limit yourself to one title when you sum up the work of the multitalented Piet Hein. He was author, poet, designer and mathematician.

He did his philosophy exam and studied theoretical physics at the University of Copenhagen, and made his anonymous debut during the Second World War in the Politiken newspaper with a number of poems making fun of the Germans.

Hein published many books – most famous is his 20-volume work ‘Gruk’ (a fusion of the two Danish words for ‘laugh’ and ‘sigh’), which has been translated into over twenty languages ​​and sold in 1.5 million copies. He is also known for his geometric figures – his most famous design being the super elipsis table, which is in many Danish homes. He became an honorary doctor at Yale in 1972.

Even though he is not well-known by the general public, Niels Kaj Jerne was one of a kind in his field of immunology. In 1951, he got a doctorate in medicine at the University of Copenhagen, and in 1984 he got the Nobel Prize in medicine for his theories on the ‘specificity in the development and control of immune systems and the discovery of the principle of monoclonal antibodies’.

Known for: The discovery of the principle of monoclonal antibodies.

As a doctor, Halfdan Mahler first traveled to Equador and then India, where he worked for the national tuberculosis prevention programme. He published a large number of journal articles on the disease, focusing on improving public health. In the period 1961-68, he was head of the tuberculosis department at the WHO, and from 1973 to 1988 he was Director General of the WHO.

Known for: His results in the field of tuberculosis prevention and epidemiology.

Bonus info: Was made an honorary alumnus of UCPH in 2008.

Few scientists are as skilled at communication as Holger Bech Nielsen, a professor of high energy physics at the Niels Bohr Institute. He has contributed to high energy physics with his theories – and has had several nuclear physics concepts named after him – including the Nielsen-Olesen Vortex. In 2001, Bech Nielsen received the German Humboldt Prize for his research.

Known for: String theory and his ability to communicate the world of physics – such as in the documentary ‘The theory of everything’.

Bonus info: Bech Nielsen retired in 2012, but is still working at UCPH as an emeritus professor.

Corina Cortes is a hotshot in data science. She graduated with a master’s in physics from UCPH and with a PhD from Rochester University in 1993. Two years later, with Vladimir Vapnik, she released the article ‘Support vector networks’, which she in 2008 got the Paris Kanellakis Theory and Practice Award for. She is an honorary professor at the Department of Computer Science (DIKU) and the head of Google’s research department in New York.

Known for: Her results in machine learning.

Bonus info: In 2014 she became an honorary alumna of DIKU.