6,000 state-employed academics in labour dispute - UCPH not involved yet 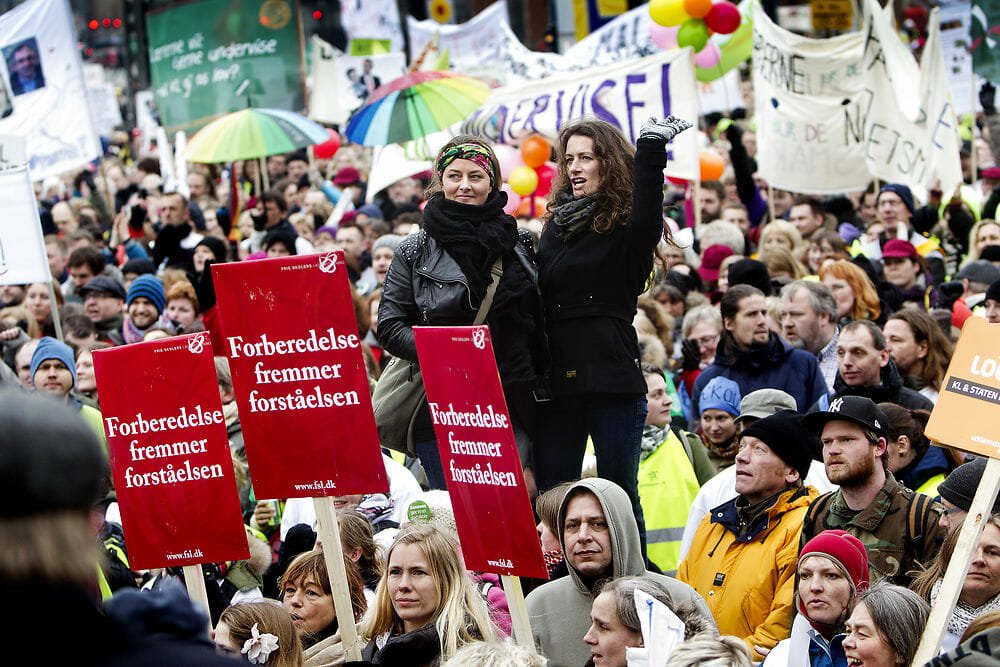 Labour market dispute - During the 2013 lockout 40-50,000 teachers demonstrated in front of parliament on 11th April, 2013. Now, conciliator Mette Christensen is to find a way out (Archive)
image: Scanpix

Collective agreements 2018 — Union group AC issues notice to 6,000 state-employed academics for a strike. The University of Copenhagen has initially been kept out of the dispute.

6,000 state-employed academics are to strike from 4th April, unless it is possible to conclude an agreement with the State Conciliation Board.
This has become clear after  – the Confederation of Professional Associations has issued a notice on 2nd March.

“We want to collaborate. But we have been through a long negotiation process and have to conclude that it has not been on the opposing party’s agenda that they want to find a common solution. We therefore need to use the dispute to get the employers to change their stance. Our goal is to reach a collective agreement,” says Lars Qvistgaard, chairman of AC in a press release.

6,000 academics corresponds to approximately 12 per cent of the state-employed AC members that will now be involved in the dispute.
AC has published a list of the jobs that are affected, and the University of Copenhagen is not on it.

The Danish Association of Masters and PhDs (DM), which is one of the member unions under AC, writes that 1,376 of their members will strike.

DM regrets at the same time on Twitter that they had problems with their e-mail distribution warning their members about the forthcoming strike, making it unclear whether they were to go on strike or not.

All hopes on conciliator

The conciliator Mette Christensen has the option of deferring the dispite twice for 14 days if there is a shift in the negotiations in the State Conciliation Board. And DM’s chairman Camilla Gregersen pins her hopes on this.

“We don’t want a dispute. But we also have to be honest and say, that what we have been presented at the negotiation table, is far from anything that we can accept. We need a decent development in salaries that matches the labour market in the private sector, and we need a confirmation that the lunch break is a part of the collective agreement,” she writes in a press release.

A dispute will go into effect on Wednesday 4th April and no later than 1st May, if the official conciliator decide to suspend the dispute in the hope of finding a negotiated solution.

The employers are able to respond by locking out state employees on one month’s notice.

The bargaining group, the Danish Association of Local Government Employees Organisations (Forhandlingsfællesskabet), representing 564,000 employees in 98 municipalities and 5 regions, has sent out a dispute notice.

Update: The union representatives for AC staff state that they await information on whether UCPH is to be locked out. A lockout will have the same consequences as an AC strike. They expect a clarification in the beginning of the week starting 5th March.