After dismissals, dentistry school in the doldrums 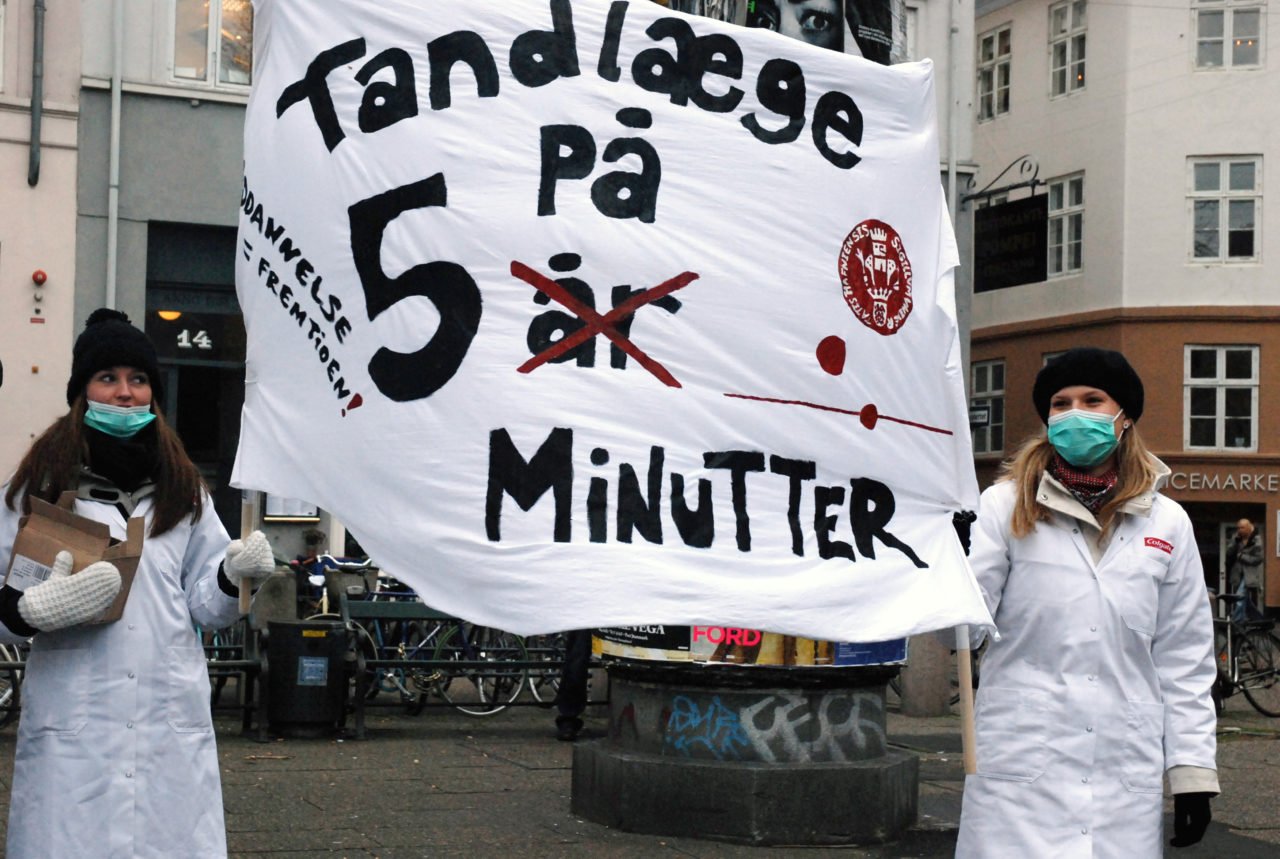 Dental students demonstrated against the consequences of one of the many rounds of cuts in 2011
image: Kristina Helena Kristensen

Trivsel — The remaining staff at the School of Dentistry are to have their well-being improved through a collaborative project that will make them more mentally robust. Managers are also following a course.

The all-too-typical reaction in recent years at the School of Dentistry, Department of Odontology, University of Copenhagen, where savings and layoffs have almost become routine.

The department has seen three major cutbacks over the last two years, with these cuts in the wake of millions being re-assigned from the budget and large numbers of employees being dismissed in 2008, 2011 and 2012.

The main explanation is a drop in grant income that has not been offset through external research funding, says Head of Department Anne Marie Lynge Pedersen.

According to Anne Marie Lynge Pedersen, the last two years of savings in particular have affected the department’s working environment.

“It has been a very turbulent year when we had to say goodbye to so many employees. So it is natural that there is a reaction from those who are left behind,” says the head of department and continues:

“The staff have to work in a new reality where they have to run a little faster, and this leads to conflicts where they previously had the extra energy to be flexible and cooperative. It is therefore important to respond as quickly as possible to signs that suggest problems with the staff well-being,” says Anne Marie Lynge Pedersen. She praises her staff for demonstrating loyalty by continuing to carry out core functions.

The cuts have subjected us to problems that are outside our control, but we decide ourselves whether or not it’s still going to be fun to go to work

Joan Lykkeaa, vice chairman of the staff cooperation committee at the School of Dentistry

Signs of a decrease in well-being and the bad atmosphere had employees and department management jointly applying for support for a cooperation and well-being project called ‘better together’.

The project has been supported by DKK 10,000 by a UCPH general purpose foundation and with DKK 255,000 from the skills secretariat.

Academic staff officer Maria Juliet Kvetny, who supervises the project, says that focus group interviews were carried out where staff were asked what was needed to improve co-operation.

Their requests included a better dialogue with, and more recognition from, their immediate managers. Courses and workshops have therefore been carried out for all managers and middle managers at the department.

The goal is for employees to experience that they are being listened to when they say something: That they are taken seriously when they voice their opinions, and that the responses on the workplace assessment are followed up.

To avoid culture of complaining

Other initiatives are a course in mental robustness for staff and four common professional days – the next 6th June – where all staff and managers are gathered together to hear each other’s suggestions about well-being, job satisfaction, bullying and cooperation.

Joan Lykkeaa, staff representative for the HK union’s lab technicians and vice chairman of the cooperation committee, says that the goal is to give people tools for a better work day.

“The cuts have subjected us to problems that are outside our control, but we decide ourselves whether or not it’s still going to be fun to go to work.

You can train yourself to be more robust, and so we have to avoid developing a culture of complaining where we are against anything new. If we cannot co-operate, we have a huge problem,” she says.

Wants to be the best workplace

The project will continue until June 2018, where it will be evaluated, and Anne Marie Lynge Pedersen expects it to be a success.

“I know it’s ambitious, but we want to be the best workplace at UCPH. The goal is for employees to experience being listened to when they say something. To be taken seriously when they voice their opinions, and to have their responses on the workplace assessments followed up.”

She says the department cannot handle any more rounds of cuts like the ones they have gone through.