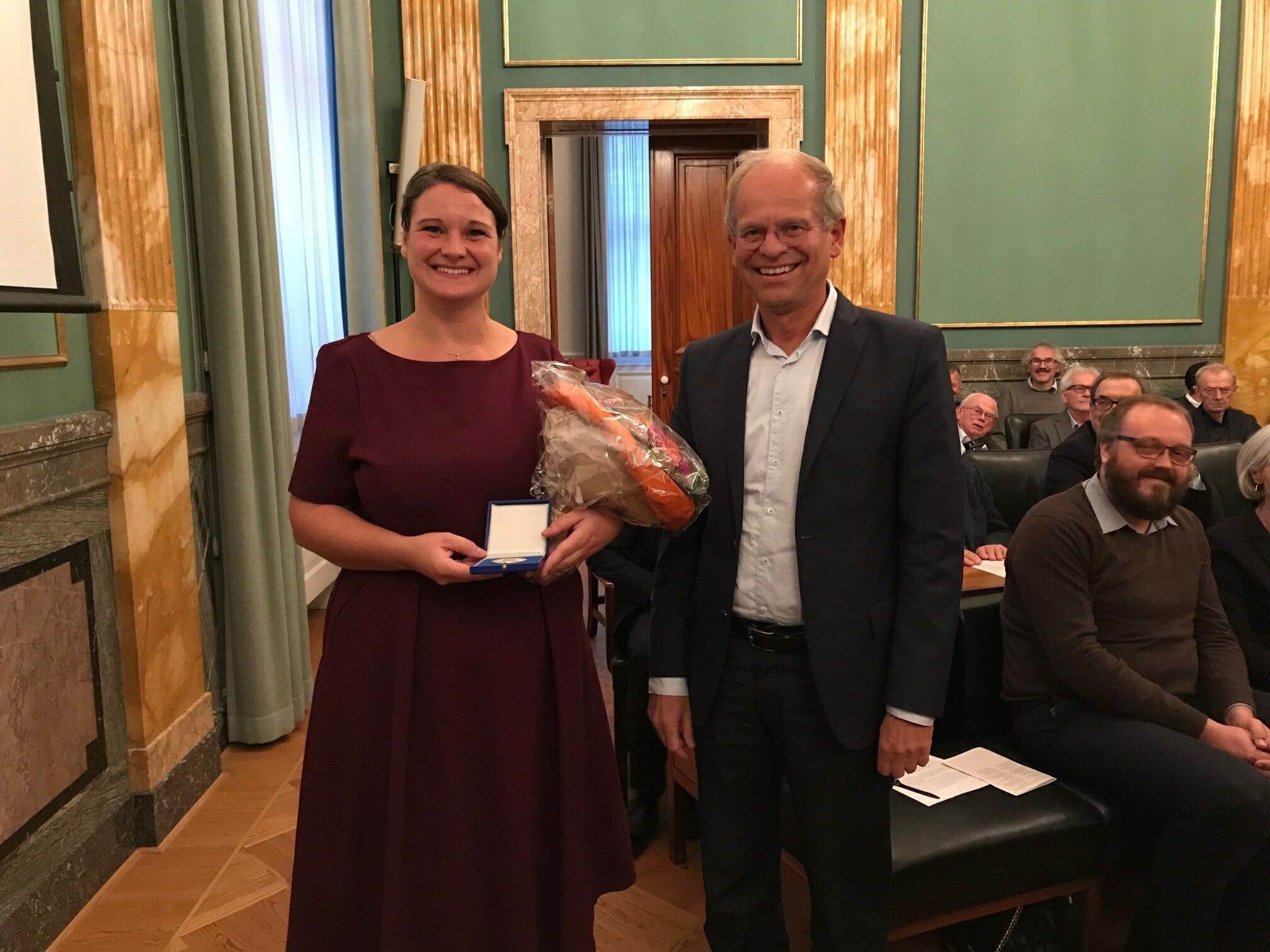 Anne Katrine de Hemmer Gudme was presented with the award at the Royal Danish Academy Of Sciences And Letters on Thursday 25th October by the academy's president Mogens Høgh Jensen.
image: Videnskabernes Selskab

Names — Anne Katrine de Hemmer Gudme receives the Royal Danish Academy of Sciences and Letters’ silver medal for her research on the Old Testament. She knows everything there is to know about what they actually ate in the Bible.

If you sometimes wake up and think “I wonder what Jesus would eat for breakfast’, read on.

On South Campus Anne Katrine de Hemmer Gudme does teaching and research on Old Testament exegesis. She is particularly interested in the social rituals of the Bible and its environment.

She is good at it. Her research has just won her the Royal Danish Academy of Sciences and Letters’ silver medal, which goes to a younger Danish researcher who has achieved excellent results. In their justification, they state:

Anne Katrine de Hemmer Gudme is a young, promising female scientist, who in a short time has built up an impressive body of research in the Old Testament that is widely recognised both at home and abroad.

“I’m so honoured,” said a delighted Anne Katrine de Hemmer Gudme when the University Post caught up with her on the phone:

“The academy stands for uncompromising basic research, and this is something we always strive for at the university. So for me it’s great to get the recognition from them. It feels very good indeed, and when you look at the former recipients, I am in extremely good company.”

What would Jesus eat?

The Old Testament is firmly planted in the past, but the book also speaks directly to the present in many different ways

At the beginning of October this year she published a small, handy, book called ‘Himmelsk føde og forbuden frugt’, or ‘Heavenly food and forbidden fruit’, where she examined what they actually eat in the Bible. Food reveals who we are and where we come from. And the examples in the book show that it is nothing new that food can be used both politically, religiously and as an identity marker, like we see today in the raw food movement and in veganism, she says:

“There’s a whole genre of what you could call bible cookbooks (with titles like the What Would Jesus Eat Cookbook), where the Bible is reactivated through the cookbook. And I find this quite funny. The Bible is fun in comparison with other texts, because it is part of a cultural heritage, a basic mythology which continues to reappear and be reinterpreted. The Old Testament is firmly planted in the past, but the book also speaks directly to the present in many different ways,” she says.

The Academy of Sciences silver medal

The Royal Danish Society of Sciences and Letters awards each year a silver medal to a young Danish scientist for excellent basic research.

The prize is awarded alternately between research in the humanities and the natural sciences. In addition to the silver medal, the recipient gets DKK 100,000 prize for their research.

The committee justified giving this year’s silver medal to Anne Katrine de Hemmer Gudme by stating that she already, at a very young age, had an impressive research career behind her, and that it hoped that the prize would contribute positively to her further development.

“It is funny. You can’t say that I am at the beginning of my research career – I have got off to a good start. When you tell people outside the university that you got a prize for young researchers, they laugh at you being young at the university when you’re 38,” says Anne Katrine de Hemmer Gudme laughing.

She confirms that the prize will certainly contribute positively to her further career:

“It feels like a huge encouragement. The recognition is an indication that I have done something right – and that I should continue. So I feel very happy, encouraged and inspired to do more – to publish books, organise conferences, and give lectures.”

And Jesus? He lived pretty much on a diet that resembles what they eat in the Mediterranean countries: Fruit, vegetables, whole grains, fish, olive oil – and he would only nibble at meat once in a while.