Can I write my name on your uni? 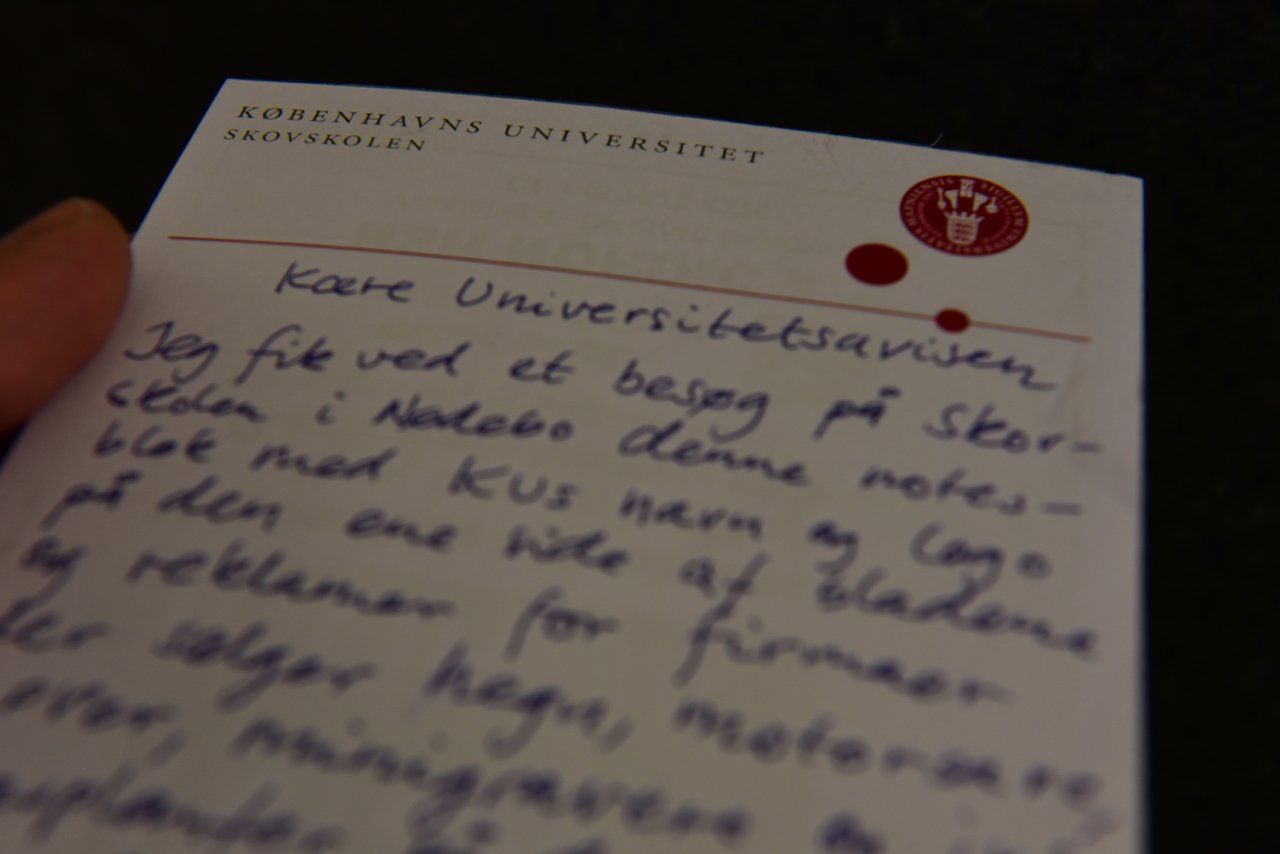 This is what a small notepad from the Forest and Landscape College looks like.
image: Christoffer Zieler

The University Post investigates — A handwritten message on an advertisement-financed notepad raises the question: Who can buy advertising at the University of Copenhagen? And the question goes both for a notepad of 14 centimetres to a 75 metre tall building.

While visiting Nødebo, I got this notepad with the UCPH name and logo on the one side of the sheets, and advertisements for companies selling fencing, chainsaws,  mini excavators and Christmas trees on the other. It’s not because I have anything against these products (for example, I own a chainsaw and buy a Christmas tree every year in December). But the mixing of the university profile and the advertising surprises me somewhat.«

This is what Hans Henrik Bruun, associate professor at the Department of Biology at the University of Copenhagen writes to the University Post. Bruun’s letter is composed by hand and on the notepad itself, so the editors themselves can have a look at it.

His description is correct. The pad, which measures 12 by 14 centimetres, has on the sheets that you write on, the UCPH and Forest and Landscape College name and the university’s red seal.

On the back of the top sheet is an advertisement for the company NSH Nordic, whose tagline is “Your complete fence supplier,” and which promises Scandinavia’s widest range of fencing, on the next leaf at the back is the Waiblingen-based German machine tool supplier Stihl, and so on. 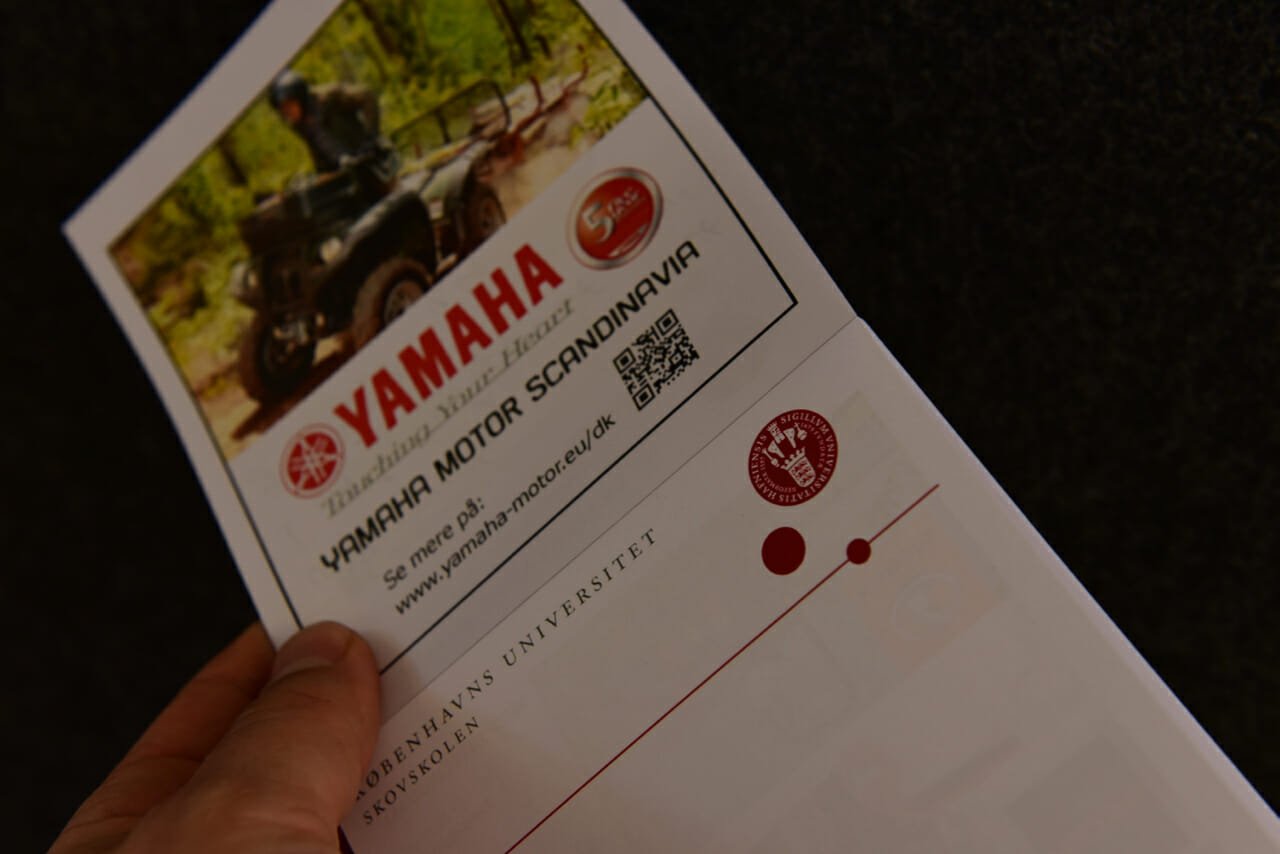 Here you can see the ads on the back of the notepad.

»Does the UCPH have a set of rules for this kind of initiative, that is likely to be in conflict with the neutrality and independence of the university?« Hans Henrik Bruun asks in his letter.

»Do other UCPH departments have similar arrangements with private companies? I wonder if guests at the Department of Drug Design and Pharmacology get notepads with advertisements for Viagra or Prozac? I would like to know that.«

No to certain types of sponsor funding

The University of Copenhagen is »very reluctant to provide exposure to products, and we have historically said no to sponsorship deals,« the person responsible for UCPH advertising and marketing, Deputy Director for Communications Jasper Steen Winkel writes in an e-mail.

He will not elaborate on who UCPH has rejected, but says that decisions about sponsorships are always a management decision.

Since 2008, the University of Copenhagen has had a sponsorship policy, that says that UCPH management welcomes sponsorship agreements. When the sponsorship rules were introduced, it attracted criticism from the former chairman of the Student Council, Pia Mejdahl Daugbjerg, who said to the University Post that UCPH was »a knowledge institution and not a raffle.«

However, the sponsorship rules include requirements which exclude certain things in advance. For example, sponsorship agreements must be in writing, and employees may not enter into them on their own. This is only something that an institute or department can do. If a sponsorship is worth more than DKK 500,000, the rector must approve it before an agreement is reached.

According to the sponsorship rules, the choice of sponsor must not harm the UCPH reputation.

UCPH does not, in this way, allow sponsorships from sponsors’ “convicted of serious crime, or who fail to comply with international conventions,” or sponsors “whose products may have a major, direct harmful effect on humans, animals and/or the environment.”

The key word here, according to Jasper Steen Winkel, is that sponsorship agreements are a management decision.

The Maersk Tower, for example, is called the Maersk Tower after shipowner Mærsk Mc-Kinney Møller (1913-2012) because the A.P. Møller Foundation, named after Maersk’s father the shipowner Arnold Peter Møller, paid the government DKK 600 million of the DKK 2 billion that the building cost, plus DKK 125 million for inventory. UCPH management considered it reasonable that some credit should be given in return.

However, the University of Copenhagen does not make a big do out of marketing the tower with Maersk’s name  in the public domain. Within the building there is a sign with a thank you for the great donation to its construction, but on the street there is no sign with the text ‘Mærsk Tower’. Instead, it says ‘Panum’, with reference to the entire complex of buildings in the area, including the old Panum colossus with a wall facing Nørre Allé.

By contrast, the DKK 300 million donation from the Nordea Foundation cannot be seen in the name of the Centre for Healthy Aging. So not all donors get name exposure at UCPH.

On a smaller scale at UCPH, the Lundbeck Foundation has had a plaque placed at the Biocentre, also at UCPH, to which the foundation donated DKK 25 million.

Old agreement behind deal on notepads

UCPH Deputy Director Jasper Steen Winkel refuses to comment on the Forest and Landscape College notepad, but the college’s local management will.

The head of the Forest and Landscape College, Thomas Færgeman, says that the notepads were manufactured by the company Fritz-Rasmussen og Co.

»They offer free delivery of notepads (on FSC-certified paper, ed.), with your logo on the front, but with advertising, typically for local businesses, on the back.«

»We organise many courses, both for employees at UCPH and , and when you go on a course, you get a small notepad. For many years we have been called up by the company asking if we wanted any more notepads, and we said yes please.«

Thomas Færgeman has only been head of the Forest and Landscape College for about a year, and he says that the University Post’s and Hans Henrik Bruun’s question about whether the ads on the notepads are in accordance with UCPH sponsorship practices has led him to take the notepad deal up for review.

»To be on the safe side, we have terminated the agreement with the company that supplies the notepads. However, we still have a stock of them, which we will use up to save resources. We estimate that in the future we will spend DKK 5 to 8,000 a year on buying notepads ourselves for the people on our courses,« says Thomas Færgeman.

»It is important that we are squeaky clean when it comes to things like sponsorships. We must always cooperate closely with the business community, but we do not want to be associated with one brand of chainsaw rather than another.«

The health sciences: No plans for drug merchandise

Hans Henrik Bruun, who wrote to the University Post, asks about the dissemination of sponsorship deals, specifically about the Faculty of Health and Medical Sciences and whether they are given UCPH merchandise sponsored by the companies behind drugs like Viagra (Phizer) or Prozac (Eli Lilly).

They do not do so, as far as the deputy head of the faculty Charlotte Aabo has been able to ascertain from her knowledge of the faculty and by asking in the administration.

»Sponsorships are not a common procedure here in the faculty service,« she says.

Charlotte Aabo says that the Faculty of Health and Medical Sciences follows the UCPH sponsorship policy, and they do not generally accept gifts.

For those who want to adorn themselves with UCPH logo jerseys, mugs, pens or, yes, even notepads there is the UCPH profile shop on the web – a bonanza of red logos and brand name features completely without co-sponsorship.

You pay for the merchandise yourself.