City elections: This is what the candidates will do for the students 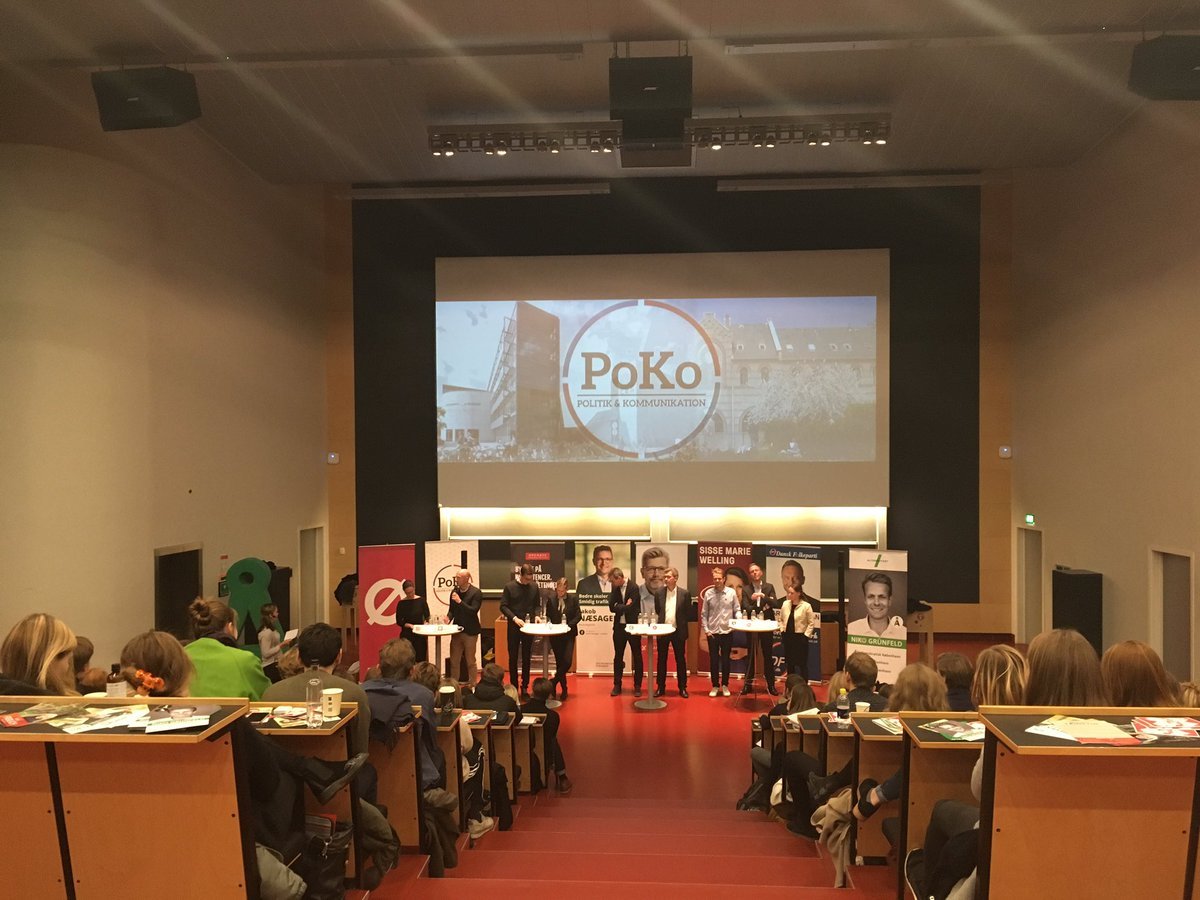 Nine candidates for the upcoming municipal elections debated in front of a full house at CSS, University of Copenhagen.
image: Politik og Kommunikation

Municipal elections — Gang crime, youth housing, and party-switching were all up for debate when the student association Politics and Communication held an election meeting with nine of the most prominent candidates in the municipal elections.

The queue of people stretches all the way through the building and out into the cold. Almost 500 students are gathered in front of the Christian Hansen auditorium at the University of Copenhagen’s CSS campus waiting to get in.

“You can go around, it’s just the queue for the coffee,” one of the organizers shouts in from the hall. Surprisingly few get out of the long queue. The time is approaching 4pm, it’s Monday, and it’s getting dark so the coffee is needed after a long day of classes. It is the forthcoming municipal elections that have attracted so many in the cold November air. In co-operation with the Communication and Languages association, the student association Politics and Communication (PoKo) has organised a panel debate with nine of the municipalities’ most prominent candidates who will each present their take on what Copenhagen’s future should be.

Inside the auditorium, the daily haunt of political scientists, economists and anthropologists, all the tables are plastered with flyers, sweets and election material. Down at the front of the hall, the candidates each stand beside their roll-up banners while the students keep flowing in.

At exactly 16.00, there is a call for order, and in the absence of free seats, the last arrivals have to sit on the stairs. The moderator is Kirstine Rask Lauridsen, who is a head consultant at the communications company Operate A / S. She outlines the programme: 40 minutes for debate and 20 minutes for questions. 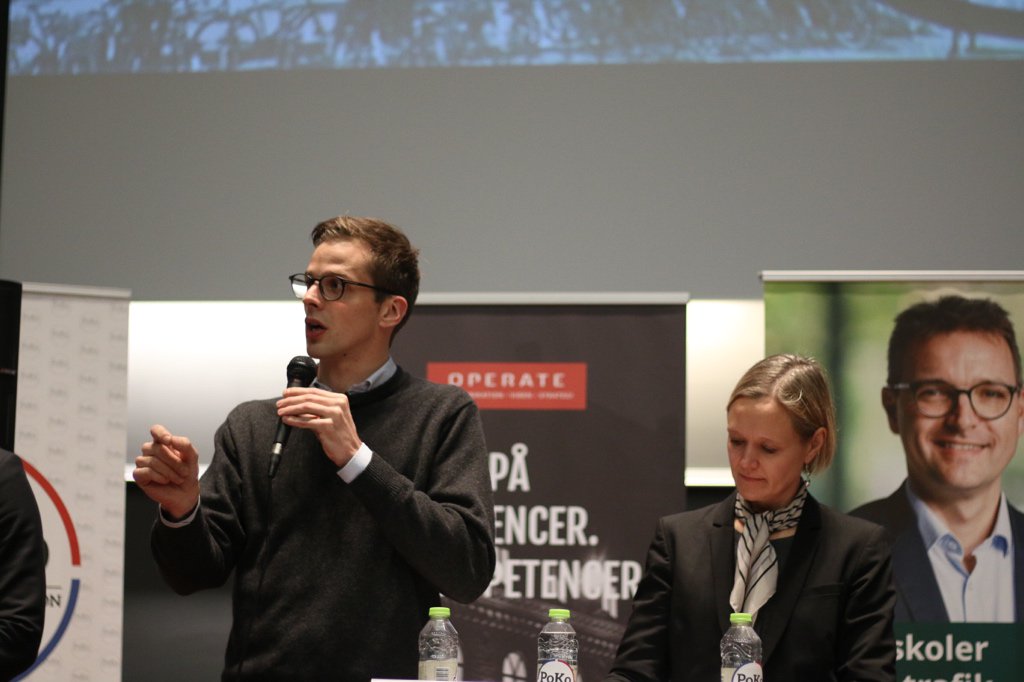 From primary school to the gangs

The first subject is the Copenhagen municipal primary schools, where parents in recent years are opting out, preferring private schools for their children instead. Cecilia Lonning-Skovgaard from the Liberal Party (Venstre) starts off:

“The Copenhagen municipal schools should be the country’s best,” she says, and although everyone in the panel agrees with the goal, there is disagreement about how to get there.

The debate moves to the Nørrebro district, and to a discussion over the parallel society and the gang activity in a district that houses many young people and students.

Jakob Næsager, a leading candidate for the Conservative Party, wants to come down hard on the gangs. He thinks the biggest problem is the parallel societies and that parents have a decisive influence on gang activity. More demands should therefore be placed on social benefits recipients from the municipality,” he says.

“If you don’t have a Danish passport, you should not be in Denmark,” he says firmly. He believes that it is the task of the government to get gang members away from the street and that more demands should be made of children in primary schools – also those who have a foreign background.

We turn the students into victims. We can, if we are told we can

LA: Students are not victims

The discussion moves back and forth, and all candidates stretch their speaking time to the limit to comment on all the topics. Following a brief debate on LGBT+ policy, the moderator puts the focus on the students. The Liberal Alliance top candidate Alex Vanopslagh was a UCPH student until last year.

“We turn the students into victims. We can, if we are told we can,” he says, stressing that it is of course hard to be young and ambitious, but that we should not have pity on the students.

Socialist People’s Party’s (SF) Sisse Marie Welling is in opposition to Alex Vanopslagh. She believes that the municipality should support the young people throughout their studies:

“I simply do not agree with Alex. We put undue pressure on young people as a generation,” she says, before the discussion moves on to the treatment of mental problems and lower municipal taxes. As a listener, you have to keep focused to keep up.

We put unreasonably hard pressure on young people as a generation

The first twenty minutes have passed, and the conversation turns to student housing. Alex Vanopslagh would like to free up the housing market and abolish rental regulations and size requirements on flats. According to him, there are many potential landlords in Copenhagen who do not currently rent out because regulation prevents it from paying off.

Mayor Frank Jensen from the Social Democrats gets the mike. He warns Alex Vanopslagh against promising more than he can deliver, and then spends his speaking time focussing on the initiatives that are already underway. The municipality’s new planning law, for example, ensures that at least 25 per cent of new construction is to be low-cost housing. Frank Jensen also points to the fact that there are 6,000 youth homes on the way to Copenhagen students.

Sisse Marie Welling criticizes the fact that students now either pay DKK 6,000 for a room in Brønshøj, or have no roof over their head at all.

“I first stood for election eight years ago because I was frustrated at how hard it was to get a place to live (…) Getting these homes is taking too long,” she says.

All candidates want to speak, and suddenly the audience is in the middle of three debates: one about student housing, one about the job market and one about climate. The subjects change faster than the candidates can get to speak about them.

“We agree that we need housing. Small homes – and many of them. Everyone should be allowed to be a part of this city, but nobody questions what it is that we do, when we run out of space,” says spokesman for the Alternative Party Niko Grünfeld, who says that there are 20,000 extra homes in the city, if you just start exploiting Copenhagen’s loft spaces.

Debates over student housing and the future job market fade out. Now it’s the audience’s turn to ask questions. From one of the back rows there is criticism of the internal break-up of the parties. A young guy in a dark blue sweater asks the candidates what they will do to maintain stability in the party groups and the citizens’ representation in the coming election term.

Alex Vanopslagh from the Liberal Alliance admits that their group has been marked by internal disagreements, but that it now means that there is a fresh team looking forward to working together.

You penalise them, and you should just keep doing this!

Frank Jensen says it’s hard to legislate out of party-switching – the defection of candidates from the party that they have been elected for – but that he has no sympathy for defectors. He applauds the voters for very seldomly allowing the candidates who switch parties during their election period from being re-elected:

“You penalise them, and you should just keep doing this!” says Frank Jensen.

Ninna Hedeager Olsen from the Red-Green Alliance says the party has decided that they will not accept party-switchers and that they call on other parties to follow suit.

“I don’t know what you’re talking about. For a long time, we received people from other parties, but then someone held a wedding and then we no longer talk about it,” says Tommy Petersen from the Social Liberal Party, referring to the recent controversy over Anna Mee Allerslev, and evoking laughter from the auditorium.

The time is now 17.00. On the rows people start collecting caps, scarves and sweaters, while Kirstine Rask Lauridsen rounds off the meeting. Many of the students look tired out. Slowly the rows are emptied and people walk out to their bikes. While we have been discussing the future of Copenhagen, it has gone pitch dark outside.