Critical students teaching their own classes 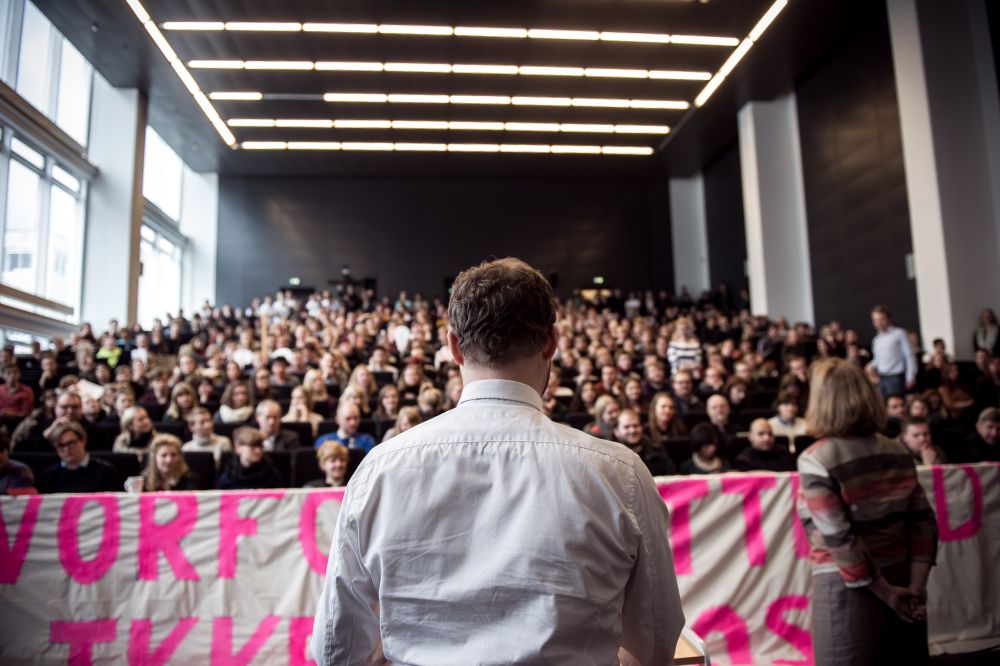 New associations are emerging in the UCPH landscape. In a serious, academic, counter-culture movement, students in critical student associations are seeking to redefine their professional cultures. The students are questioning the norms of their subjects and trying to find answers to questions like: Who am I as an anthropologist? Does value-neutral knowledge exist? Is the university teaching me everything that I should know?

Two of these critical student associations, that are trying to expand the meaning of what it is to be an economist and a political scientist respectively, are Critical Economists (KP) and Critical Politological Study Group (KPS). KPS is one of the latest offshoots of the trend. The association was founded almost a year ago and is a group of political science students who meet up in their spare time and that read texts outside their curriculum.

The founders of KPS, and , are both 6th semester students.

You are also welcome if you reckon your curriculum is a load of rubbish.

“It started with Kasper and I talking about how there were issues that were not discussed in the curriculum and which had large, human and democratic, consequences,” Nicholas says about their motives for setting up the association.

“Yes, and one thing is the facts, a completely different thing is the literature about them.” We didn’t have to look very far to find a whole academic field, consisting of critical theory, that transcends political science, and which is almost not part of our curriculum at all,” Kasper explains.

The study group is mainly to be found in an open Facebook group where the members jointly decide which critical texts to read. There is no other requirement for the literature than that it be critical and that it challenges what the curriculum otherwise takes for granted.

“The idea is that we meet here and try to make each other smarter on some of the things that happen in the world, and which our curriculum does not address,” Nicholas says. Kasper adds:

“You are also welcome if you reckon your curriculum is a load of rubbish. This is what we found, ourselves, on various occasions.”

"The idea is that we meet here and try to make each other smarter on some of the things that happen in the world, and which our curriculum does not address,"

Anyone who is interested can, via the Facebook group, be involved in selecting the texts that the KPS reads. Critical economic literature is studied in particular, and Nicholas does not conceal the fact that he is not satisfied with the study programme in economics that the political scientists of tomorrow are being offered.

“The economics teaching we have is deficient in many ways and focused on very narrow paradigms of thought… when you study economic history, it becomes clear to you that there are things omitted from what we have to learn,” says Nicholas.

KPS is holding the next study group on 2nd May at 17.00 at CSS. The study group is to go through some and everyone is welcome.

At CSS you can also find clusters of anthropology and economics students who meet up and discuss their subject areas. FKA, a community of critical anthropologists, has a more activist approach: They actively support political demonstrations and, for example, take a public stance on the labour market dispute and distance themselves from the government’s immigration and integration policy. They specifically state that they work from a feminist, Marxist and decolonialist perspective, strive to produce alternative knowledge, and to challenge the production of an anthropology that presents itself as value neutral.

And then there are the economics students, nicknamed in Danish ‘politter’, whose critical student association has been given the name ‘Kritiske Politter ‘ (KP). KP was set up in 2011, but the association’s narrative starts somewhere in the US market for subprime mortgages and the beginning of the last financial crisis 2007-09.

I was shocked when I started studying economics. There was never really any scientific discussion of where we were in the field.

“Both economists and economics students got a wake-up call and started asking questions about how the hell it could go so badly,” says , the chairman of the association.

In the aftermath of the crisis, many enclaves of critical economists emerged, and today KP is part of a movement that is a whole lot bigger than them alone.

“We are working to create more pluralism in economics, and to work for a more critical stance becoming a more natural part of the curriculum. The study of economics, not only at UCPH, but throughout the world, tends to be one-tracked and characterised by dogma,” says Philip, that managed to round off his programme of study in the political sciences before he started as an economics student.

KP is academically, and politically, neutral. Their purpose is to open up other perspectives, create debate, and facilitate critical stances among economics students.

Philip Frost on the years after the financial crisis

Where the KPS exclusively holds internal meetings and discusses possible extensions of the curriculum, KP holds both seminars, open presentations, debates and conferences. They have just organised a conference in the theory of science.

“We have for several years criticized the subject of economics for placing the theory of science far too late in the course of the study programme, so now we are doing something about it ourselves. The course ran over four Wednesdays and was primarily for first year students. It has been a huge success, says Philip.

In addition to the external events, the association’s members also organise readings and calculation groups and social events. KP is organising this year, for the third year in a row, an economics conference where students can dedicate an entire Saturday to an economic subject. Philip describes it as “really exciting”. The theme of this year is ‘power and the economy’ and the conference takes place at CSS on Saturday 5th May from 09.30 – 19.00.

Rasmus Madsen, acting chairman for Progressive Lawyers, says that the association does several different things at the same time. The left-wing association does educational work where they, in Rasmus’ words, “try to articulate the subversive potential of legislation”; do company visits, and organise social events.

“When there is new legislation that needs to be explored from a dogmatic legal point of view, then we try, when interesting, to draw attention to the political potential or the political implications of the legislation,” Rasmus says about the association’s work.

[The problems] are largely the result of the many layoffs imposed by government cutbacks.

The association works to draw attention to how the law can be used to criticize and fight oppressive structures and to create social change in society.

Niklas Zenius Jespersen, chairman of the humanities chapter of the Student Council, HUMrådet, says that many of the humanities students’ criticisms are directly derived from the cuts and downsizing that has struck the faculty over the past few years.

Niklas Zenius Jespersen is a history student. He says that the academic council at the subject of history has in recent years discussed the many problems that follow from a narrower and more eurocentric course offering, that only focusses on limited time periods.

“[The problems, ed.”] are largely the result of the many layoffs imposed by government cutbacks. In addition, there has been a lot of discussion in connection with the closures and mergers of education programmes, where many smaller language subjects, like Tibetology, have had to choose between either getting language instruction or cultural historical instruction, since the academic closures and layoffs have prevented the previous wider offering from being maintained,” he says.

At several humanities study programmes, volunteer associations have emerged, where students organise professional seminars, student periodicals, and scheduled discussions. Part of the purpose of these associations is to fill in the gaps where the students do not believe that the teaching is adequate.