Crocodile adventure led to the University of Copenhagen 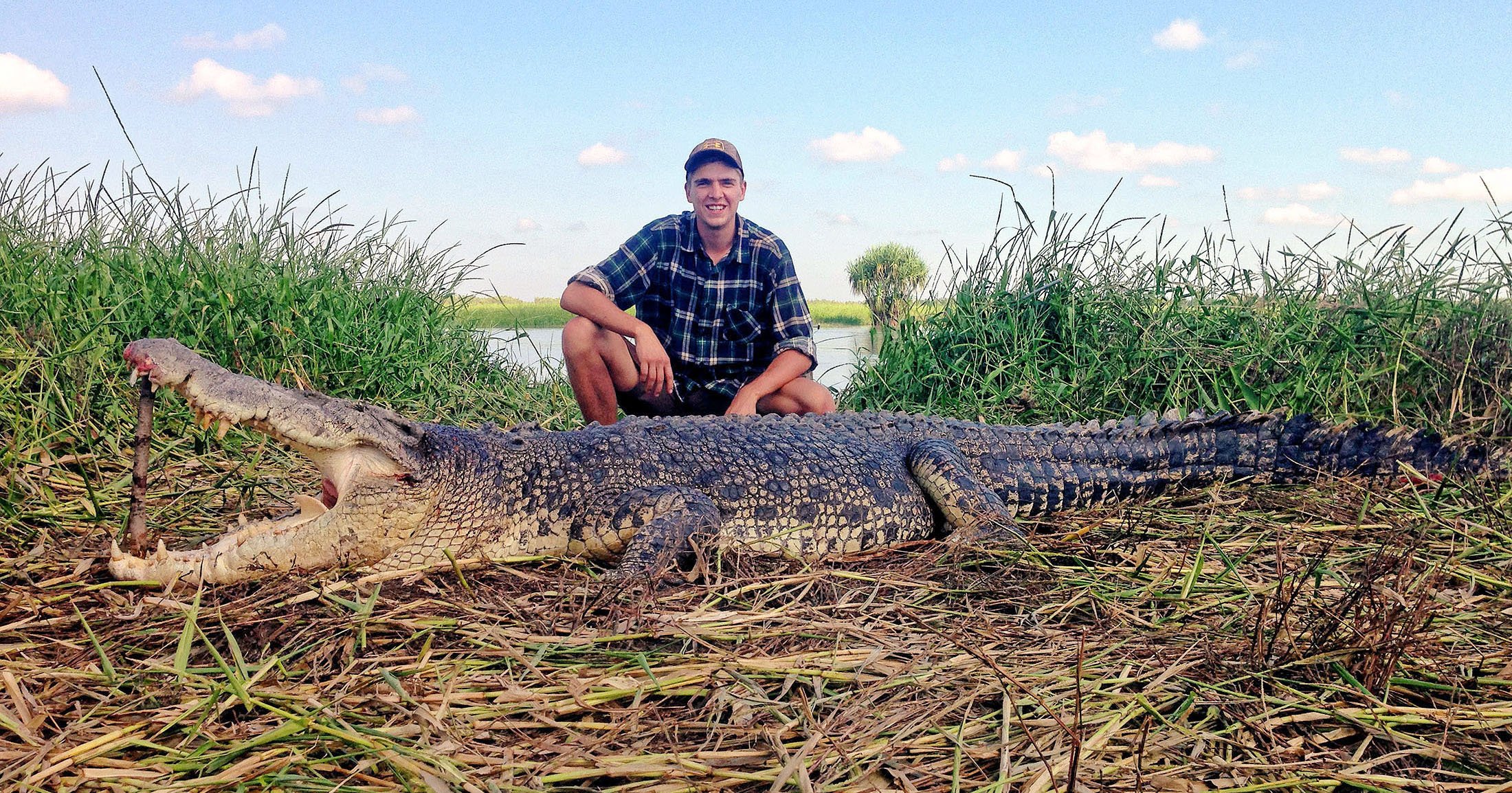 Niels Thordal went to Australia and worked on a safari farm after high school in his own quest to find the right study programme. He found it. And he found an adventure that contrasted with sedentary classroom life.
image: Niels Thordal

Pursuit of the dream study programme — Niels Thordal needed a couple of gap years to zoom in on the right study programme after high school. But he finally found his inspiration by working with giant, deadly, saltwater crocodiles on a safari farm in Australia.

It was a 2-and-a-half month working stay on a safari farm bordering the Kakadu National Park east of Darwin in Northern Australia, which finally had Niels Thordal deciding to study  at the Skovskolen school of forestry, University of Copenhagen.

Part of the farm income comes from regulating the stock of the largest crocodiles in the area, so that they kill and eat fewer tourists.

But statistically, a tourist will be killed every year anyway by the big carnivores. The work on the farm helped him with his quest to choose

I really felt the pressure sometimes while working with the crocodiles

Prior to his stay, he had spent a year and a half after high school without finding what it was that he should start studying. He had for a long time considered becoming a farmer like his parents.

“I think that more ideas popped up because I was traveling, rather than if I stayed at home in Denmark to make money,” says Niels Thordal.

The farm near Darwin is called the Carmor Plains Wildlife Reserve and does a lot of other things besides crocodile regulation. It also offers various types of regular hunting. The crocodiles are, however, a protected species so they are never hunted.

Instead, to put them down, farm owner Matt Kelman catches the crocodiles in big cages. He has a license to kill 12-14 crocodiles a year, and clients who come as tourists pay as much as DKK 50,000 to take home the animals’ skins and craniums. 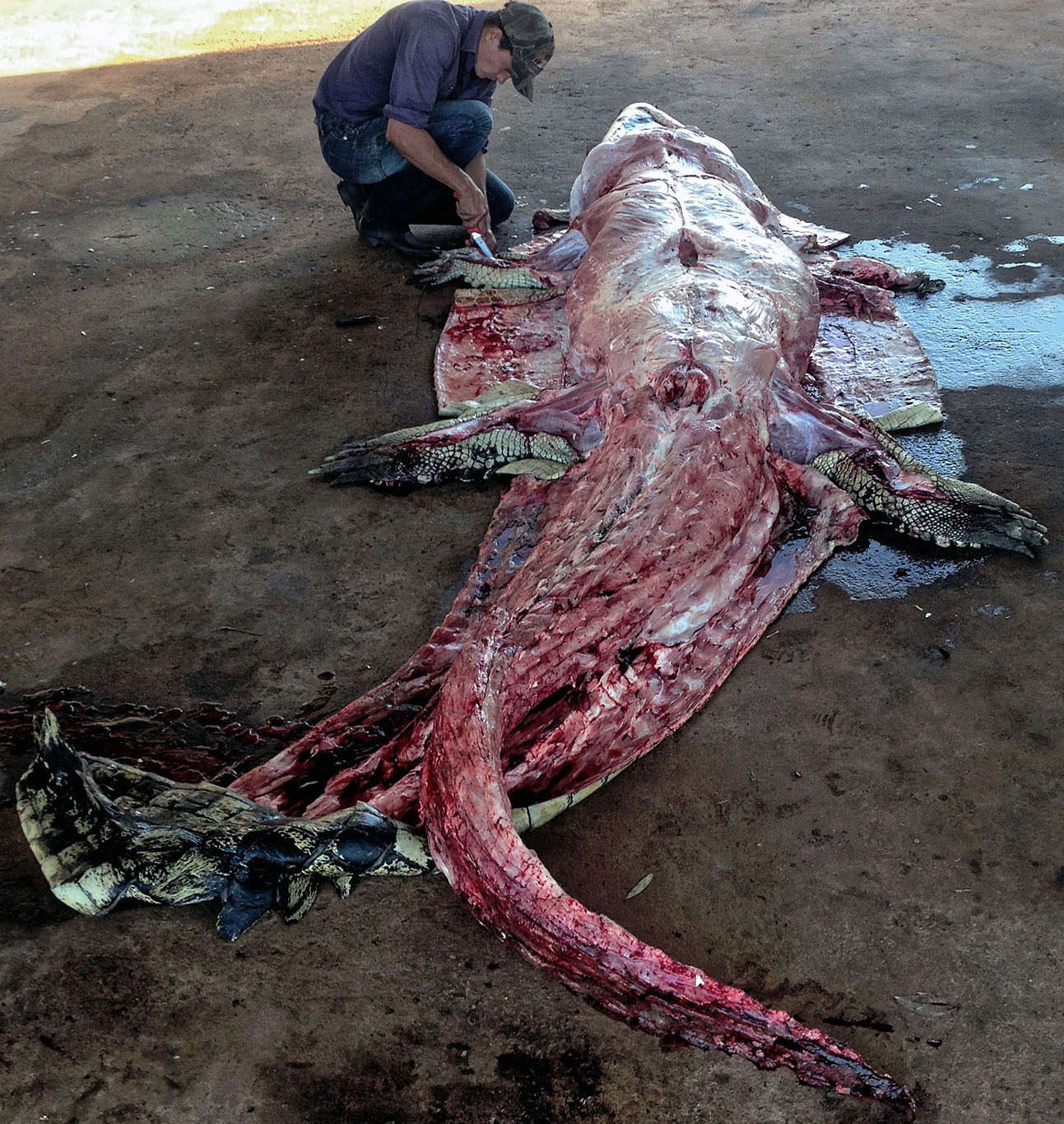 A large saltwater crocodile is skinned by a colleague of Niels Thordal at Matt Kelman's safari farm
image: Niels Thordal

This work was certainly not without its hazards, says Niels Thordal.

“I really felt the pressure sometimes while working with the crocodiles, because you have to go almost completely out into the water where the crocodiles are, to pull up the traps. You have to really keep an eye on them, and as a rule, we should not get any closer than 10 meters from the water’s edge, because the crocodiles can jump several meters into the air from the bottom of the water to catch their prey,” he says.

However, it was inevitable that he got closer when working with the crocodile traps.

“In addition, there were poisonous spiders that could suddenly crawl up on your back, and when you weren’t used to the place, you were horrified of everything,” he says with a laugh.

He saw snakes every day, but they were not a problem for him.

He and the owner Matt Kelman had to first lure the crocodiles into the cage, so they would shoot, say, a wild boar as bait. 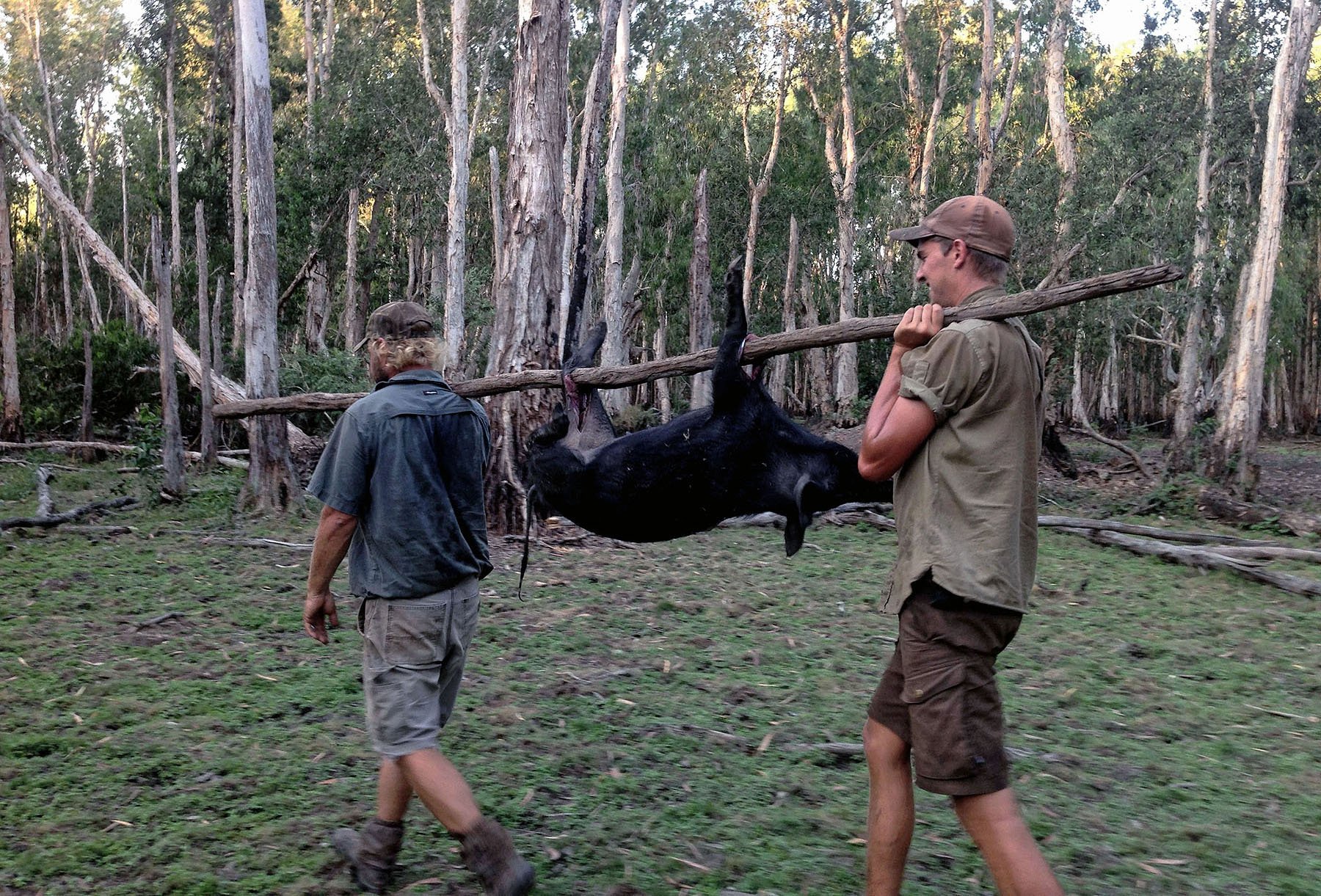 Here, Niels Thordal (behind) and Matt Kelman (front) have shot and caught a wild boar which they take down to a crocodile trap.
image: Niels Thordal

For a couple of days they could also spread animal blood out into the river to lure the crocodiles to the area and get used to the cage being on land nearby before placing the actual bait in the cage.

Saltwater crocodiles can weigh up to a ton, so you don’t mess around with them, but Matt Kelman was a bit exceptional about this also, says Niels Thordal. 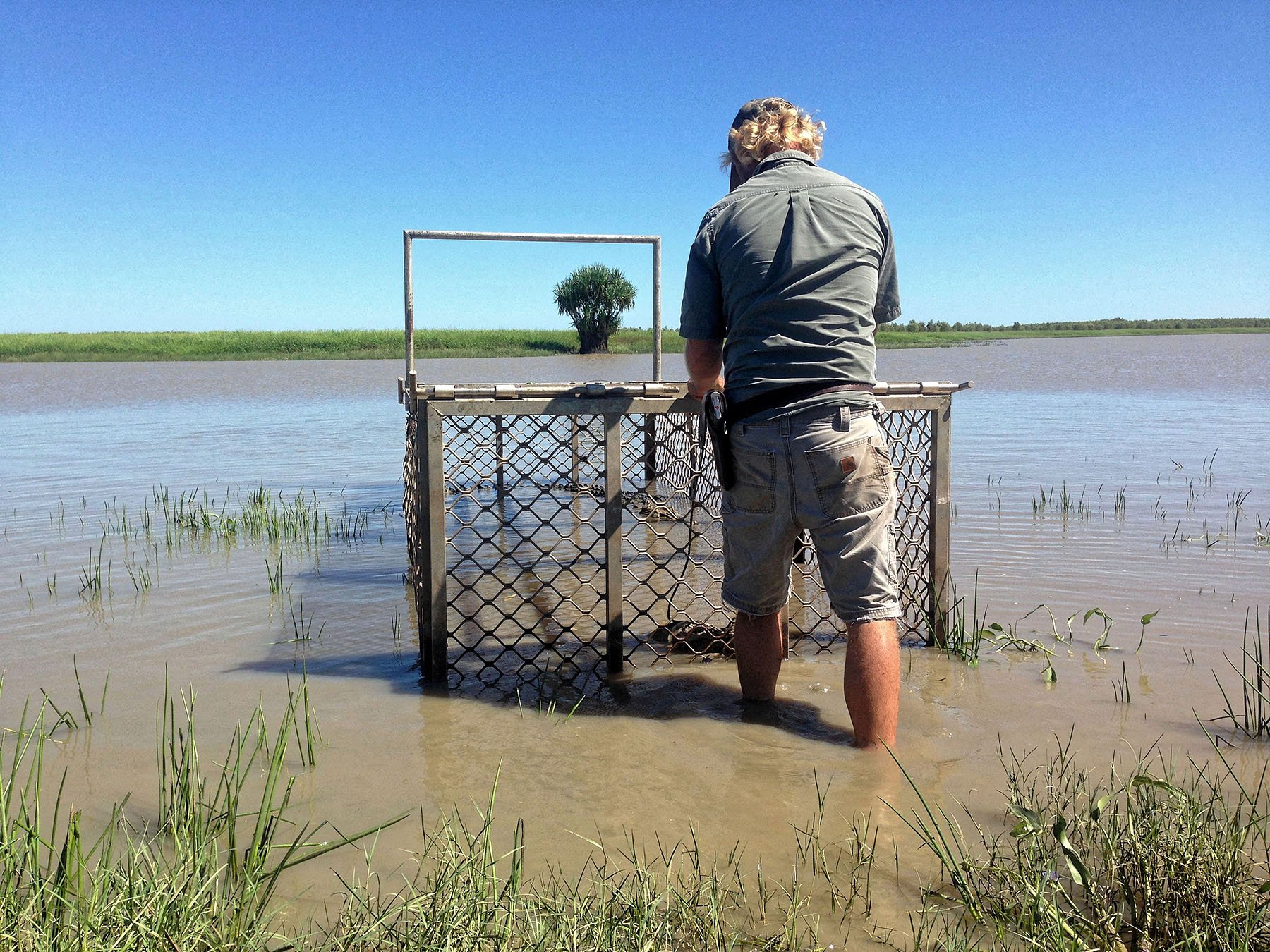 Matt Kelman stands with his gun on the left side of the water. A large crocodile is trapped in the cage - its jagged-edged back rising above the water.
image: Niels Thordal

“He was fearless, and sometimes he acted a bit wilder than he was in reality when clients were with him. Sometimes he just did some things because it looked cool. Sometimes he took his gun out and shot into the water four times around the trap to scare other animals in the water away if there were any,” says Niels Thordal.

Learn to manage the wild

While Niels Thordal stayed at the farm – from the beginning of May until the end of July in 2016 – he helped to put down three crocodiles. 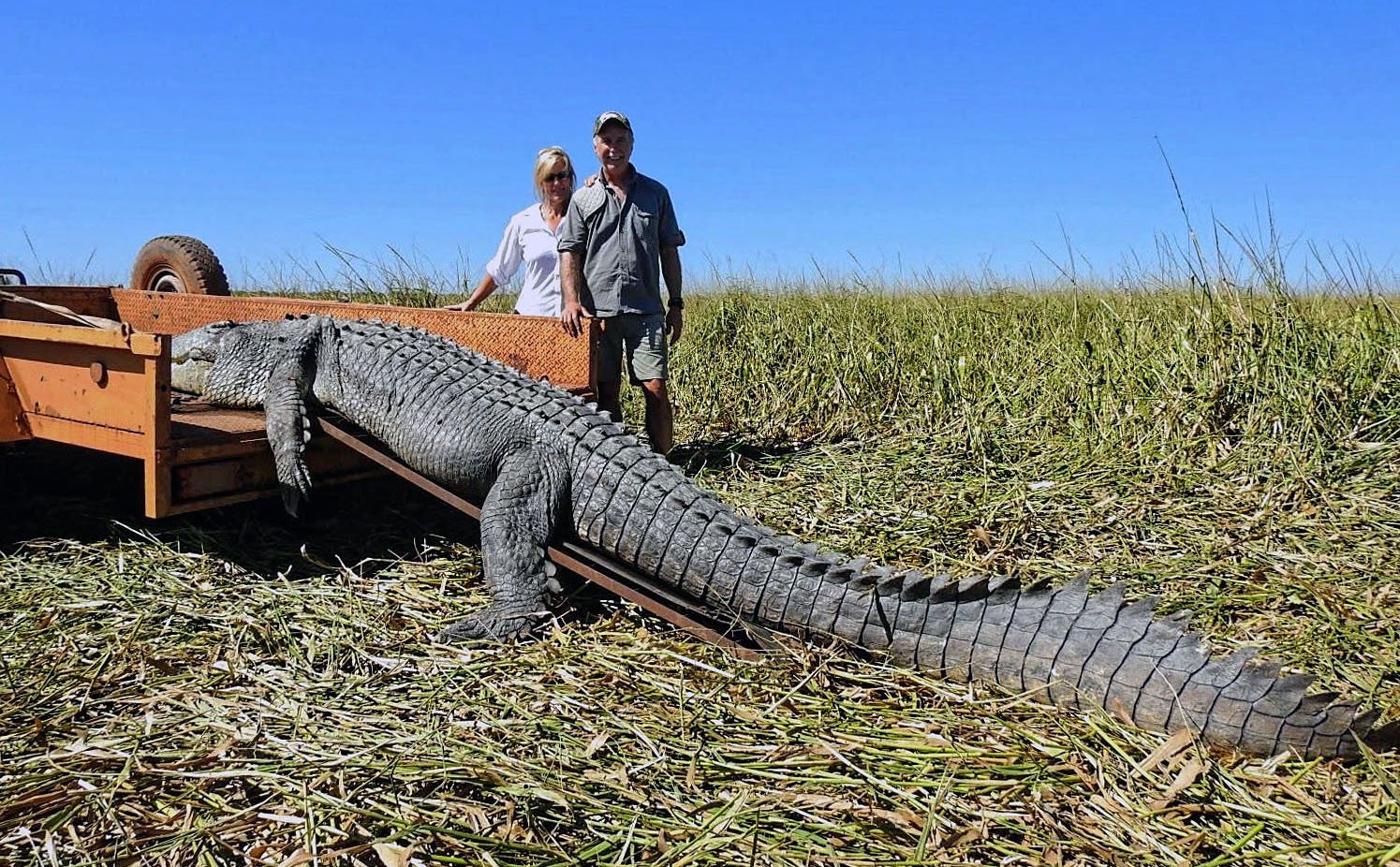 Two clients – tourists – get their crocodile pulled up on to a trailer to get the hide skinned off at the safari farm. For about DKK 50,000, they have bought a permit from Matt Kelman to bring the cranium and hide out of Australia if they wish to.
image: Niels Thordal

The experiences with them, and the whole work of taking care of the farm’s 42,000 hectares of land in order to give all the animals, including buffalo and wild boar, the best possible living conditions, made him aware of the forestry study programme. 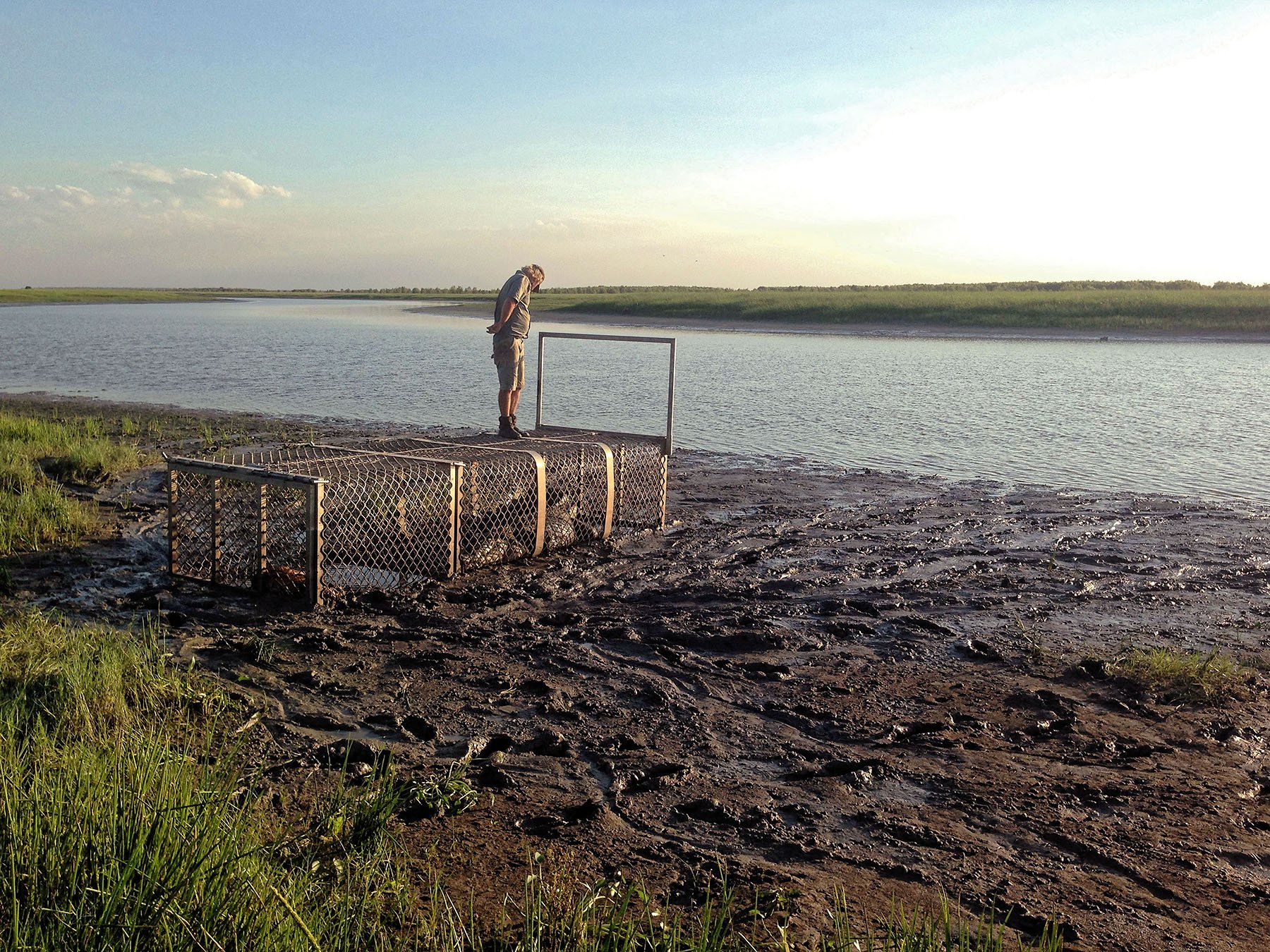 Here Niels Thordal's boss, Matt Kelman, is standing on top of a cage with a saltwater crocodile inside.
image: Niels Thordal

“There was a little bit of internet access down there, and I found the study programme as forest and landscape engineer at Skovskolen on the net,” says Niels Thordal.

What he learned in Australia corresponds well with what he is taught at the forestry school at home in Denmark, where he is now on his third semester.

“Here it is a lot about how you as wildlife manager cannot just shoot all the deer that pass by, because if you want to run a business and live off people coming and hunting, then it’s important that you always have the best to offer them. There should always be some big trophy animals for the hunters, and you cannot just shoot all the big bulls first, because then there are none left to carry on the good genes for other big bulls,” says Niels Thordal.