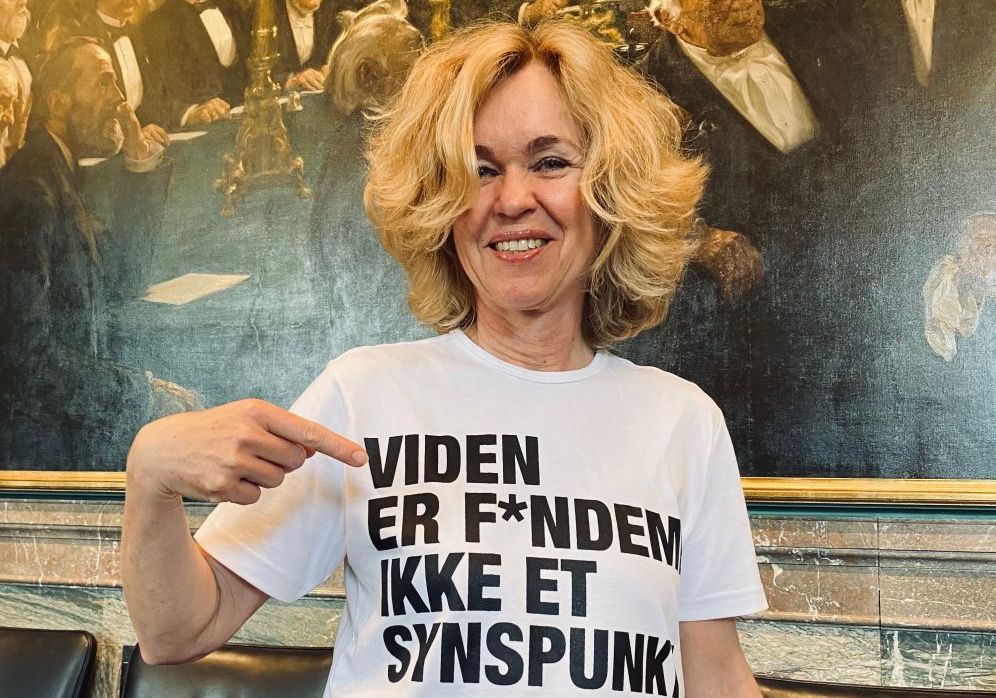 Anja C. Andersen is one of several scientists who have filed a complaint to the Press Council about the ‘Ellen Imellem’ satire. On the T-shirt: 'Knowledge is not an opinion, goddammit'
image: Mette Holbæk

Professor Peter C. Kjærgaard recently got a reply to a complaint he had sent to public broadcaster DR over the TV programme ‘Ellen Imellem’ [Ellen in-between, ed.]. He had waited for 11 days to find out whether the media group would delete a programme that he himself, under false pretences, had participated in.

In the programme series, a scientist is invited in to talk about their area of expertise. Or at least that’s what they think. In fact, they are interviewed by a representative of a fringe non-science group. The host Ellen Kirstine Jensen gets the questions via an earpiece.

The complaint, which the University Post has seen, was unsuccessful for the professor of evolutionary history, who is director of the Natural History Museum of Denmark. The response from the head of the young programming DR Ung team Malene Birkebæk states that DR is unable to process the complaint because the programme has not yet been aired. This is according to Peter C. Kjærgaard, who is disappointed by the response:

»You don’t know whether you should laugh or cry. I can only see that something is completely wrong with both the logic and the ethics of the DR Ung group. It seems like satire in itself, when they write that they can’t assess whether a programme should be aired before it has been aired,« he says.

The response from DR means that the programme, to Peter C. Kjærgaard’s dissatisfaction, will be released.

Peter C. Kjærgaard is not the only person who has complained about the DR series. Physics professor Anja C. Andersen has done so also, and she has not yet received a response to the complaint she sent to the media group 14 days ago, even though her programme has been aired. She says that she is baffled by the DR response to the scientists.

With the help of the trade union, the Danish Association of Masters and PhDs DM, the researchers have now written a joint complaint to the Danish Press Council, which is an independent public tribunal. They hope that the case is of such a principled nature that the Press Council will consider it.

DR lied after the interview also

Peter C. Kjærgaard describes how the programme’s presenter Ellen Kirstine Jensen lied to him repeatedly during the filming. After the interview, she confessed and told him that she would take on the role as a creationist:

»Finally, at the end of the shoot, I get angry because it’s a completely different interview than the one that I’ve been invited to. The journalist stops the recording and says that she is sorry and embarrassed about her own behaviour. She says that she has had to take on the role as a creationist, and could not tell me, as otherwise the interview would not work,« says Peter C. Kjærgaard.

After the interview has ended, Peter C. Kjærgaard may not leave the scene of the recordings. A long exit sequence needs to be filmed where he and the host are to be followed down the DR escalator. He is encouraged to smile, because it has to look as if he is in a good mood. In this setting, the presenter maintains that she has been forced to take on the role as a creationist. It is only later that Peter C. Kjærgaard realizes that the exit scene has been secretly staged, so that his ‘attacker’ is behind him on the escalator.

»It gives me the shivers when I think about it,« says Peter C. Kjærgaard, who calls the experience a »double deception«.

He says that it undermines DR’s own explanation for why the programme is not in contravention of press ethics guidelines:

»The DR management defence has been that the journalist does not take on a fictional role. But how can she tell me that she has a role to play – and then management subsequently defends itself by saying she is not playing a role? It does not make sense.«

The University Post has presented Peter C. Kjærgaard’s criticism to DR. In an email, the head of DR Ung Malene Birkebæk writes that DR does not process complaints about content that has not yet been aired, partly because they often work on the programmes right up to deadline. She does not wish to comment on whether the host Ellen Kirstine Jensen complied with the rules on press ethics when she reportedly lied to Peter C. Kjærgaard. Malene Birkebæk insists that she believes that the programme complies with the rules on press ethics as well as DR’s own ethical guidelines.

By virtue of his expertise, Peter C. Kjærgaard was invited to join the TV programme to talk about evolutionary history. Or at least that’s what he thought. In fact, he was interviewed by a creationist, or someone who believes that the animals and plants of the Earth have come about via divine creation, and not natural evolution. The host Ellen Kirstine Jensen gets the questions via an earpiece.

In his complaint to DR, Peter C. Kjærgaard writes that he felt misled through the process of recording the programme. He believes that he has been tricked into a conversation with a group that he has deliberately avoided communicating with throughout his academic career.

DR does not believe that the interview took place under false pretences. They refer to the fact that there is a wider scope for press ethics when it comes to satire, and that the consent that Peter Kjærgaard gave when he agreed to participate is adequate for DR to be able to air the programme.

In the meantime, Peter C. Kjærgaard has to accept that the programme that he reluctantly participated is to be aired. And he awaits it with concern:

»There is an hour’s recording with me, but I know from the other programmes that they edit it in the most compromising way. So I expect the worst. It is very unpleasant.«