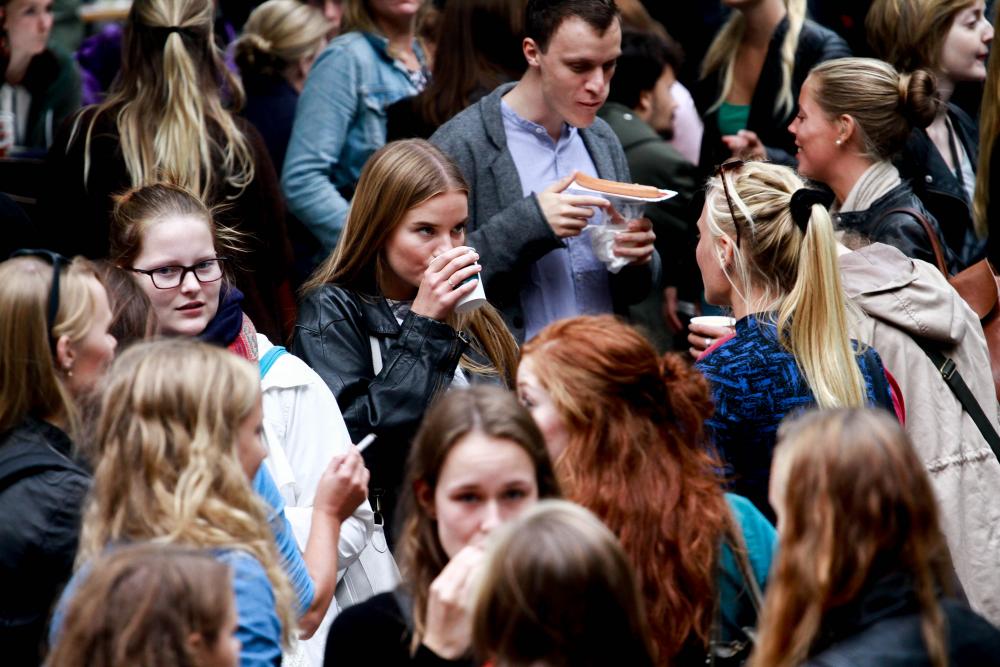 Matriculation ceremony in 2014. Languages - English but also other languages - need to be a bigger part of academics, students say in surveys
image: Adam Garff

New language strategy appears to be supported by a questionnaire among Danish and Nordic students of the University of Copenhagen: They want a wide variety of new language skills including - and beyond - English

A new University of Copenhagen (UCPH) project that wants ‘more languages for more students’ appears to be supported by the results of a new survey.

Danish and Nordic students reported the need for a whole range of language skills to support academic coursework, ranging from reading skills in German for theologians, legal French for students of EU legislation, to academic Danish. This is according to survey results presented at a symposium of the Centre for Parallel Language Use on Wednesday.

As a Danish theology student put it: “I think you should expect of the students’ German language skills to be at a much higher level from the beginning, so that texts by Nietzsche and Luther are not handed out in English,” adding that “it is my opinion that it’s a great loss not to have access to the German academic tradition.”

One third of students going abroad had difficulty

In a new rector’s initiative a five-year research-supported ‘more languages for more students’ project aims at improving the language skills of all students. It ties into a broader vision of attracting the highly qualified, internationalizing the University’s education, improving its relations to the outside world and qualifying its graduates for the international job market.

The three surveys, that were carried out by the Centre for Parallel Language Use (CIP) at the University of Copenhagen, had over 1,400 respondents sampled from the UCPH study abroad programme, and from the faculties of Social Science and Theology.

29 per cent of the study abroad programme students, 31 per cent of Social Science students and 52 per cent of Theology students had experienced difficulties because of limited proficiency in a foreign language.

“I have HUGE problems with the many academic texts in English at Social Science. There is a lot I don’t understand and I simply don’t get,” said one Danish student.

Not surprisingly, English and academic English topped the list over language skills that would improve the quality of students’ study areas. But this was supplemented by French, German, other Nordic languages, Spanish, Japanese and Chinese for a smaller number of students.

According to Marta Kirilova, postdoc at CIP who carried out the survey, especially Danish students who “start on an English-language masters level programme overnight experience difficulties.”

Foreign language skills are a key part of the students’ decision on where to study abroad.

“I know there are [students] who choose not to go on exchange because they feel that their English is not good enough to be able to pass an exam in English,” said one Economics student.

A student of law, who was responding to the survey from Scotland said that “had it been possible to take a Spanish course, I might have applied for a stay in South America”.

More surveys on the way

Professor Anne Holmen is director of the Centre for Parallel Language Use, and she outlined at the symposium the historical development of the University of Copenhagen as a multi-lingual institution. From the Latin instruction of the medieval times, the university has moved to other European languages, before a predominantly Danish-language focus took over during Denmark’s nation state period in the 19th and 20th centuries.

This has subsequently been replaced with a parallel Danish-English focus in more recent times. In secondary education, students have become weaker in non-English foreign languages, but stronger in English, and this has affected the student body at the university level.

According to Marta Kirilova of CIP, a new investigation into non-Danish students’ language needs is forthcoming.

Read about CIP’s part of the language strategy project here (in Danish).