Do you turn off your camera when you do your online courses? You are not the only one

It is hard to build up academic and social relationships with screens between us.
image: Rasmus Meisler

Online teaching — Many students never turn on the camera for their online courses. But this can be detrimental to students' social relations and well-being, and it negatively affects instructors' motivation.

It is a quarter past nine, it is a Thursday. Your alarm has just gone off, and the coffee has barely run through the filter before you have to take the first class of the day. You sit down at your computer, or drag it back to bed with you.

And what do you do then? Turn on the camera, or not?

If you leave it off, you are not alone. Many university instructors say that students are not turning on cameras in their virtual classrooms.

One of them is Jakob Holtermann, an associate professor at the Faculty of Law at the University of Copenhagen. During the fall semester, he did his classes in a hybrid format, where some students showed up, while some were at home.

»Gradually more and more, and towards the end almost all the students at home, turned off their cameras. And my impression from my colleagues is that the trend is definitely generally going towards switched off cameras,« he says.

The University Post has spoken to several students who do not have their cameras turned on when they have classes.

They turn it off particularly when they are at lectures with many students. One of them is Johanna Holtov, who is a student of psychology.

»Interaction at large lectures is not really on the agenda anyway, so I mostly sit, listen and watch with the camera off,« she says.

Apart from Johanna Holtov, we have spoken to students who, for other reasons, also have their camera off.

They feel uncomfortable with their teachers and fellow students being able to see them and their homes in the background. Some people find it distracting, others find it uncomfortable. None of them wanted to talk on the record about their experiences.

Does the dishes and plays with the cat

And there may well be many different reasons why students keep the cameras off. This is according to Helle Mathiasen, who is a professor at the Department of Science Education and an expert in digital learning environments.

Several students said that turning on the camera was disconcerting.

And all the online and flexible teaching that is going on right now is a perfect object for someone like her to analyse.

During the Danish spring 2020 lockdown, she started a preliminary study that looked at how well, and how, online teaching actually works from a communication perspective. One of the things she is looking at is the use of the cameras during instruction.

»When I interviewed students during the spring, several of them said that turning on the camera was disconcerting. They found simply that things got too close and personal if all the other students and the lecturer could look straight into their home,« says Helle Mathiasen.

But students may also prefer to be free from prying eyes, just be because it is the most practical for them to do so.

»One of the students I interviewed said that she didn’t need to be seen. When the camera was off, she could play with the cat or do the dishes. She just wanted the sound and what happened on the screen in the classroom. Someone else said that she varnished her nails while listening to the teaching – something that she would likely not have done at a physical lecture or session,« says Helle Mathiasen.

Most important in smaller classes

Morten Bækgaard Thomsen teaches first-year dentistry, medical, and molecular biomedicine students in the functions of the body. He has started beginning all his classes with a request to students to turn on their cameras.

»Then there is 10-20 per cent of the students at a lecture that do it. When there is a smaller class, I can probably get up to half,« he says.

And it’s not quite as important to have the cameras turned on during lectures as in a smaller classroom setting, according to Morten Bækgaard Thomsen.

READ ALSO: 4 tips: How to endure all this online teaching just one tiny, tiny bit longer

When he lectures to several hundred students in an auditorium, he cannot uphold a connection to each individual anyway. The students are, to some extent, anonymous. But when it comes to classroom teaching, this is something else.

»For classroom teaching, it’s the be all and end all that you can see the people you’re talking to. It is important that you can have eye contact, because otherwise the distance between you and the students is too great. And this is rarely good for academic discussions. I also think that some of the joy of teaching and learning goes down the drain when you can’t see each other. For teachers and for students.« 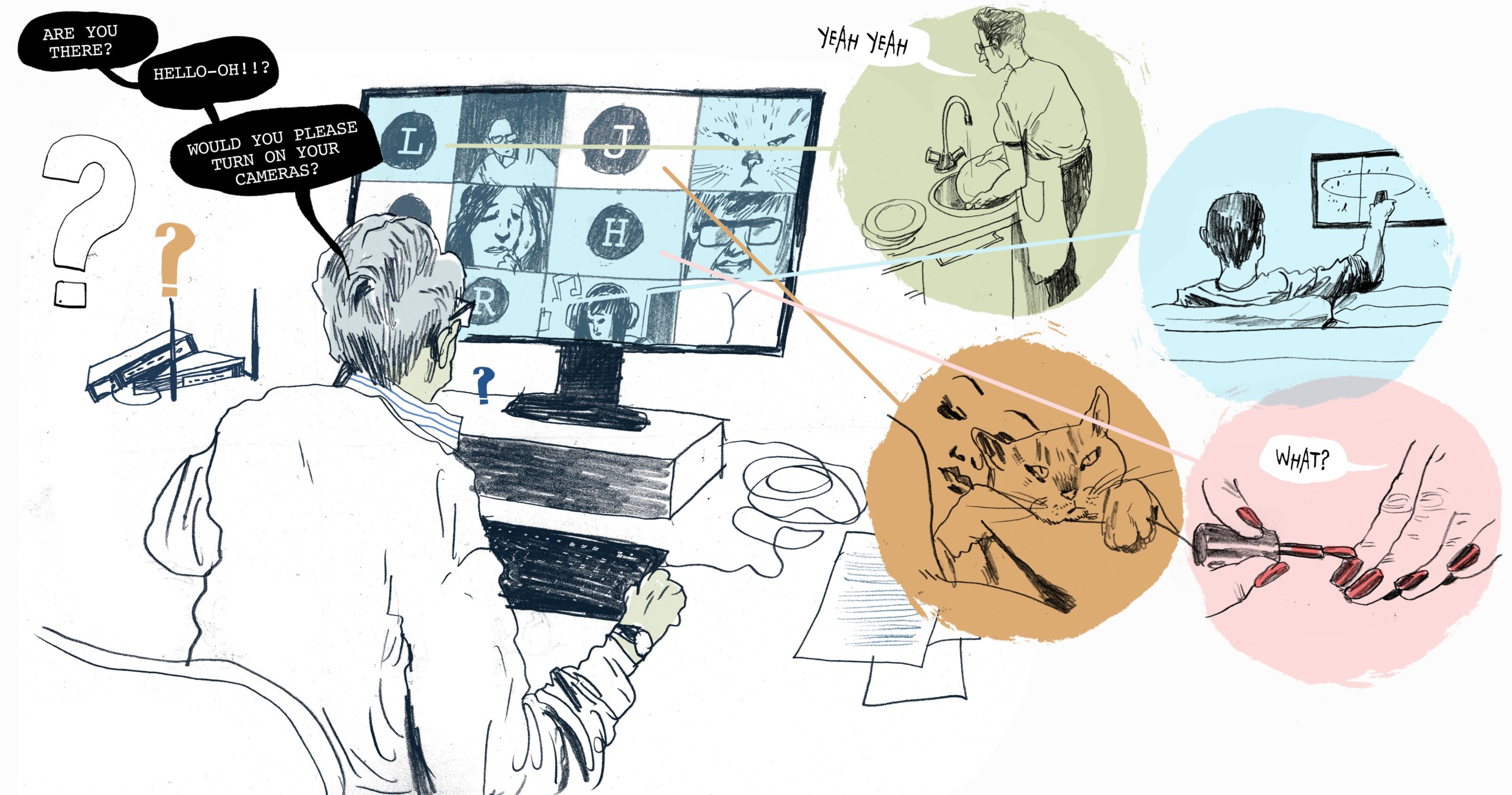 Tired out and in a bad mood

If you think your instructor doesn’t care one way or the other about seeing you in real life, and that he or she is perfectly satisfied with putting out a smooth presentation, and then leaving: well, then you are actually mistaken. Certainly according to Jakob Holtermann. He will be participating in an upcoming campaign at the Faculty of Law that is to give students more joy in taking part in online teaching.

»We are ‘switched on’ as teachers by the social contact. To be able to see people’s body language, have eye contact with them, and be able to sense our students. When they are present and attentive, and when I have lost them, or talked over their heads. It saps the teacher’s energy when there are no students’ faces,« he says.

Katerina Tritsaris agrees that it is a drain on instructors’ energy to have to teach a group of black squares on a screen.

She is an associate professor who also teaches first-year students on the medical, dental, and molecular biomedicine programmes.

As the instruction suddenly went digital, everything was drowned in lack of bandwidth, technical glitches and patchy connections. It didn’t seem to be that important whether students had their cameras on or off. But then she realised that she was getting tired in a completely new way.

»It drew away so much energy from me to have to deliver proper teaching without being able to see my students’ reactions. I discovered that I was getting very tired from having to give so much of myself without getting anything back,« she says.

Normally she can teach for hours without it affecting her.

»It’s tiring in a different way to have to teach black screens. Normally, I can teach six hours in a row and be tired, but also happy. I’m not always happy if I’ve only seen black screens.«

Everyone learns in a different way: Some learn best listening while varnishing their nails. Others learn best by interacting with other students and listening actively with a nod or smile to the instructor.

»Students are not a homogeneous mass. They are all different and have different learning preferences and needs,« says Helle Mathiasen.

I am in no doubt that in my class, we would have had more team spirit if we had been able to meet up physically.

But you’re not just studying at university to learn things.

»The basis of all learning and getting an education is also all the other stuff that is the context of the teaching – especially the social communities. What the students need right now is to communicate with other students about something that is not necessarily academic,« says Helle Mathiasen.

Johanna Holtov agrees with this point. She has just finished her first semester on the bachelor’s programme in psychology, so she has not yet tried being a university student in a world without the coronavirus. She can feel that something is missing, however.

»I am in no doubt that in my class, we would have had more team spirit if we had been able to meet up physically. You move from one classroom to another, and you get to chat about this and that. Now we almost only talk about academic stuff. It is the only thing we know we have in common,« she says.

Johanna Holtov always has her own camera on when she is at class.

Among her main classmates in the psychology programme, she finds that it is easier to maintain a sense of having a normal teaching day when her fellow students have their cameras on.

»Since we are already challenged in forming friendships and getting to know each other, then it may be a small advantage if you have your camera on. Then you feel you are together, even though you are separate. But of course I understand that there may be reasons for not wanting the camera on,« she says.

In her study of online teaching, Helle Mathiasen has also observed how it can be difficult to be part of a social, digital, community, if you do not show your face.

»It becomes a strange way of being together, because you can just see that someone doesn’t want to turn on their camera, but you don’t know why. This leads to uncertainty. Setting up online communities is difficult, but it can be achieved. It’s about allowing the best possible opportunities for communication,« she says.