Economists can be scared too 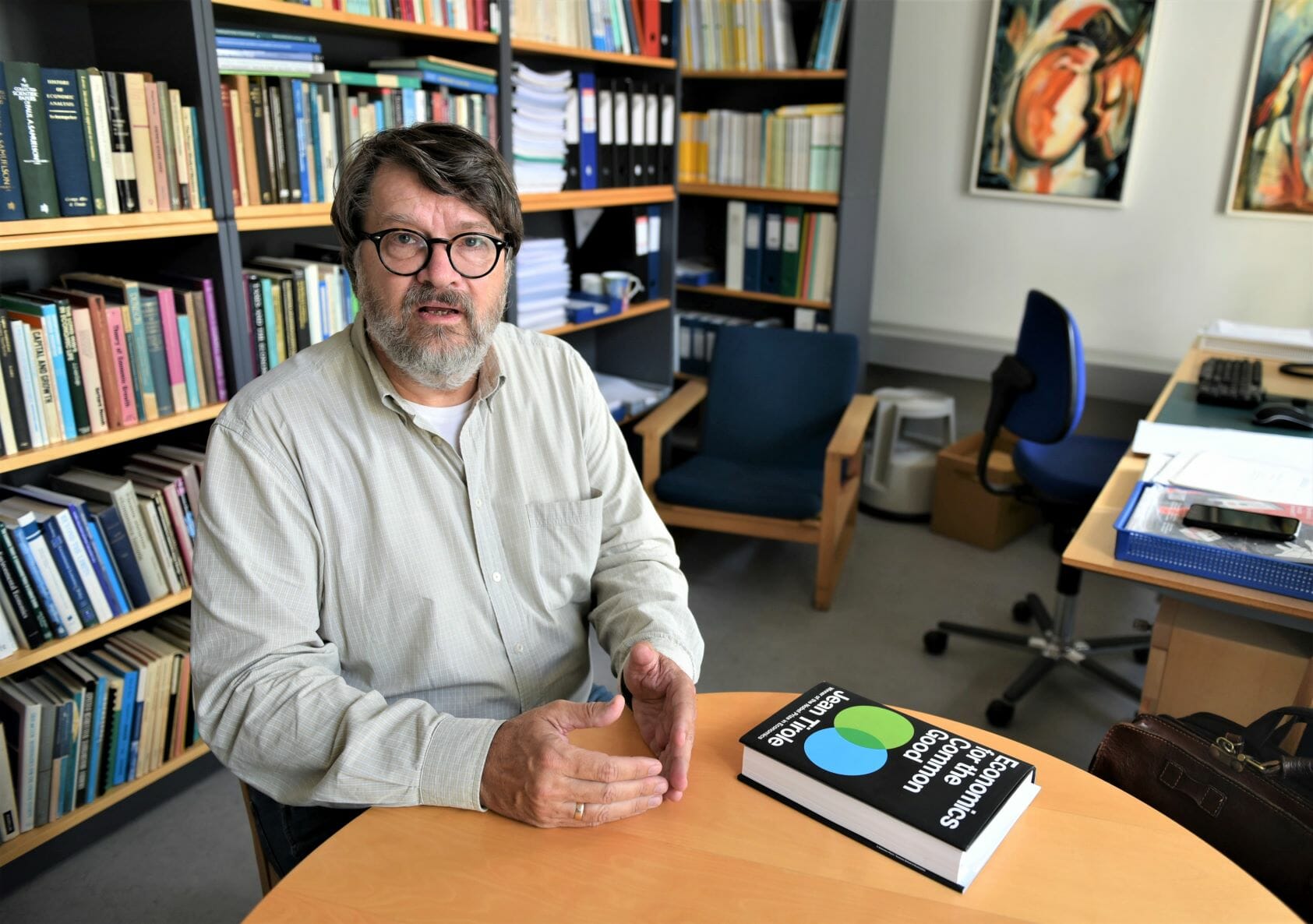 Nobel visit — Economists can and should work for the common good. This is according to Nobel Prize winner Jean Tirole, who will visit UCPH in October to discuss the climate crisis. Professor Peter Birch Sørensen is looking forward to it.

Economists have a bad reputation. Firstly, they deal with a market economy, which for many people is seen as uncontrollable. Secondly, they often base their theory on assumptions that are far away from the real world, like . This is something that Nobel Prize winner and professor of economics Jean Tirole wants to change.

“Jean Tirole wants to show that economists and the economic sciences are not as dogmatic and narrow-minded as some people make out. He himself is an excellent example of this,” says Peter Birch Sørensen, a professor at the Department of Economics at UCPH and chairman of the Danish Council on Climate Change about Tirole’s latest book . On Friday, 5th October, Tirole will present the book to an open event at UCPH which you yourself are also invited to.

The free market has never won over people’s hearts

In 2014, Jean Tirole received the Nobel Prize in economics for his theoretical work on how markets are regulated most effectively. Almost overnight, Tirole became a familiar face in his home country France. Suddenly, he started getting stopped on the street by strangers, and had to answer questions on a variety of topics outside his own area of expertise.

For many, the pursuit of the common good, the guiding principle behind significant public
intervention, has been sacrificed on the altar of this new economic order.

This is how ‘Economics for the Common Good’ came about. In an attempt to reflect over the economists’ role in the public debate and to ensure the benefit of society. And the government plays a major role in it,” Peter Birch Sørensen explains.

“Tirole says that we do not have to choose between the government or the market to regulate the economy. The two things are interdependent. You need to have a strong state to determine the rules for trade on the market, so that it works effectively.”

Jean Tirole points out that many people are frustrated by the loss of political control that has taken place in many countries as a result of the privatisation, globalisation and outsourcing that has taken place in recent decades. He understands that the free market did not win our hearts. Because, as he stated in the introduction to ‘Economics for the Common Good’:

“Even so, the market economy has achieved only a partial victory, because it has won neither hearts nor minds. For many, the pursuit
of the common good, the guiding principle behind significant public intervention, has been sacrificed on the altar of this new economic
order.”

Peter Birch Sørensen, professor of economics and chairman of the Danish Council on Climate Change

The climate is the common good

The climate crisis at the top of the list of the biggest challenges of our time. Some economists call it a problem sent from hell, the biggest market failure ever. As Peter Birch Sørensen puts it:

I have made the decision that I am an optimist. Optimist in the sense that I believe that it is possible. And it doesn’t have to cost a fortune.

How do we safeguard the climate and the common good? We create institutions that can combine individual interests with global interests. Jean Tirole stresses, like many others, that the solution to the climate crisis must necessarily be a global one. Because if you look upon it from an economic point of view, there are enough challenges to deal with. One of them is the so-called carbon leakage problem:

“If one country carries out a more ambitious climate policy than the rest of the world and makes it very expensive to emit CO2 from its own territory, then it simply causes a relocation of energy-intensive and CO2-intensive production to other countries where there is no tough regulations,” says Peter Birch Sørensen.

An individual country can have good intentions with their climate policy. But this does not necessarily mean that the climate will improve. In some cases, the country simply inflicts costs on itself. So as many countries as possible need to agree on binding targets for reducing CO2 emissions. According to Tirole, one solution would include a global tax on CO2 or a quota market for CO2.

Can we ensure the common good without Trump?

The problem is that we’ve done it before. For years, the heads of government have talked about making tougher climate policies at a global level. The Paris agreement was a step in the right direction, but where is the world after Trump pulled the United States out of the agreement last year?

It won’t be easy, says Peter Birch Sørensen: “It is clear that the Trump administration is a major problem. But we can hope that Trump will only be a parenthesis in history, and be pleased about the fact that large parts of the United States and the rest of the world do not follow his line”.

Who is Jean Tirole?

On 4th October he will participate in an international workshop with some of the world’s leading experts in climate economics.

He will also participate in an open event about his new book ‘Economics for the Common Good’ on 5th October at 16.00 at CSS in room 34.

You can read the introduction and more about ‘Economics for the Common Good’ on the publisher’s website.

The EU has a common CO2 quota market, and the same applies to both China, South Korea and among a number of states and cities in the United States. These markets may one day merge together. But in order to get as many countries in as possible, we need a tightening of regulations within the framework of the Paris agreement, says Peter Birch Sørensen.

The overall targets of the Paris agreement are good. But the individual countries need to offer to do much more, if these targets are to be achieved. An idea could be to set a minimum price on CO2, so that all countries would be forced to raise their CO2 prices. This would avoid the problem of ‘coasting’, where some countries can reduce their CO2 price in order to gain a competitive advantage. Jean Tirole also proposes introducing trade sanctions against countries which are not part of climate agreements and that thereby practices .

“I have made the decision that I am an optimist.”

Jean Tirole is relatively optimistic on behalf of the climate. We have the political – and economic – tools to create a better world. But it also requires commitment from citizens, according to Tirole. It is no use just lashing out at politicians. They have to support change and the politicians who make the changes.

Peter Birch Sørensen also believes that we can solve the climate crisis: “I have made the decision that I am an optimist.” Optimist in the sense that I believe that it is possible. And it doesn’t have to cost a fortune.”

Like Jean Tirole, he also believes out that economists can play a role in ensuring the common good and solving the climate problem. And he therefore hopes that people will listen to Tirole:

“I hope of course that those who are critical of economists and economic theory, or who have followed the debate in recent years about economists’ role in society, will come along and hear what Jean Tirole has to say.”