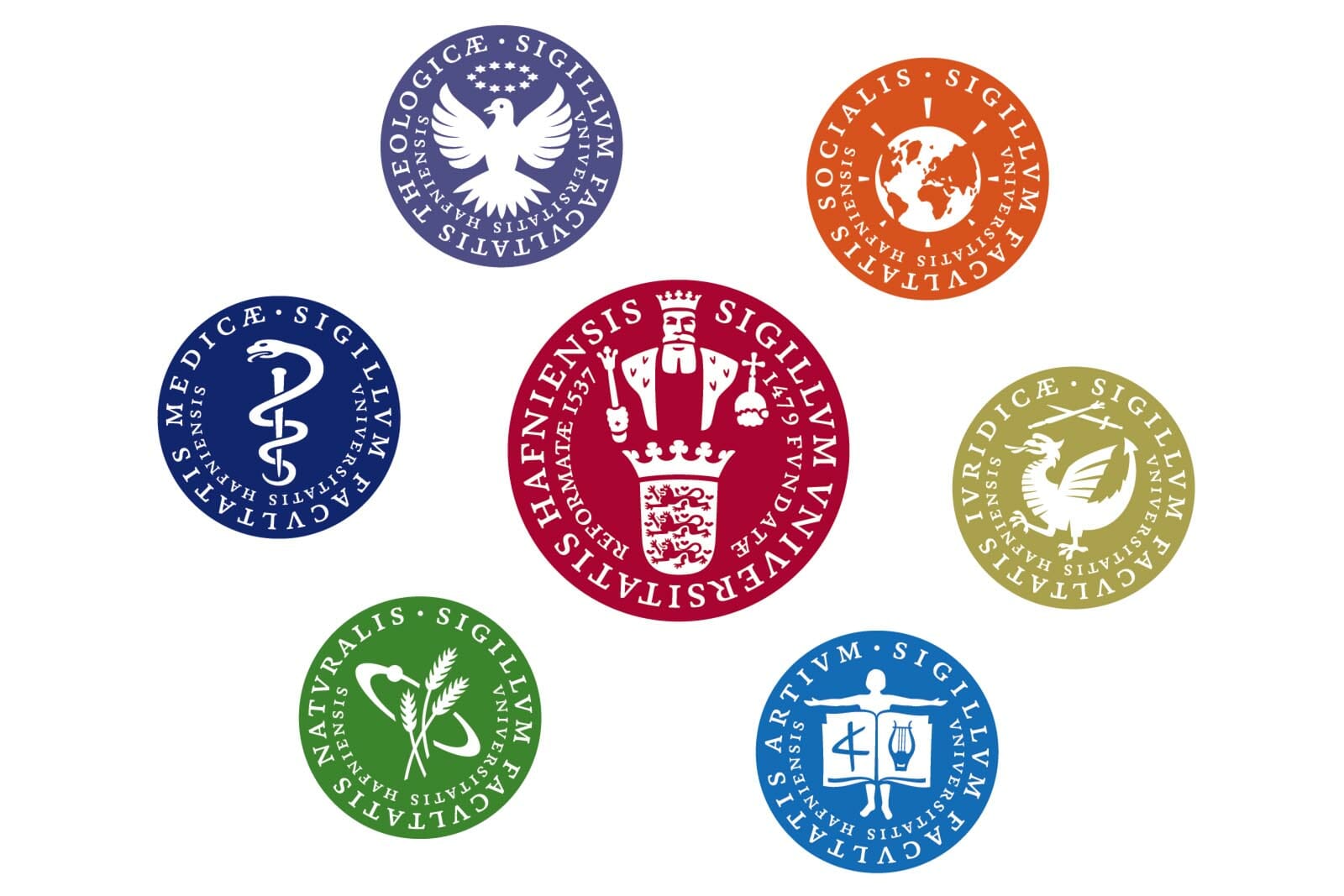 One circle above all: The red 'king logo' in the middle is the only logo that the University of Copenhagen will use from 2020 onwards. Around it can be seen the six faculty logos that are now being phased out.
image: grafik: Anders Fjeldberg

Design — After many years of signalling the scientific peculiarities of each subject in a multi-coloured logo concept, Denmark's largest university is opting for a clean slate: With one logo to rule them all.

A new design concept called ‘One Common Identity’ means that, as of 1 January 2020, the University of Copenhagen only has one logo.

All of the university’s faculties and departments, including research centres, research groups, projects and museums, will henceforth use the red-wine-coloured ‘royal logo’, which hitherto has been reserved for the university’s joint branding.

This is to take place on the web, on paper and in any other place where a logo is needed, to show coherence and to make for a wider impact for the largest university in the Nordic countries.

Since the beginning of the millennium, the university’s faculties have had their own logos with a motif that symbolically reflects the individual disciplines.

How did the king’s seal come about?

The university’s oldest seal is from a letter from the year 1531 showing Saint Peter with a key and a book.

When the university was re-established by Christian III in 1537 after the Reformation, it was given a seal showing Christian III with a crown, a sceptre and an orb above a crest, which was vertically divided between Denmark and Norway’s national coats of arms.

In a circle surrounding the king it states: Sigillum Universitatis Hafniensis Fundatæ 1479 Reformatæ 1537 – meaning: Seal of the University of Copenhagen founded in 1479, reformed in 1537.

The Faculty of Law’s olive green seal is adorned, for example, by a wyvern – a winged two-legged dragon – as ‘a symbol of the battle against evil’. The green seal of the Faculty of Science is adorned with a planetary orbit around three cereal straws, as a symbol of the research community, which includes people who study outer space, and people who know a lot about farming.

At the Niels Bohr Institute (NBI) at the Faculty of Science, they are prepared to scrap the faculty’s previous logo.

»We are working with our faculty on a major overhaul of our website to reach the new design concept goal. I daren’t say how much paper with outdated logos we have, but it can be recycled, and we do not have a lot of merchandise that we have to get rid of. We use T-shirts for the open house event, but they already have the new, official, royal logo on them, which we have also used for quite some time,« says Søren Jønsson Granat, staff member at the department’s communications section.

»All departments have their quirks«

According to Søren Jønsson Granat there will be a transitional period, because it is difficult in practice to phase in new logos on one day. But the transition will be short.

Has NBI not had a reputation for wanting to stand out more than other departments at the University of Copenhagen, and will there be no resistance to the new design template?

»It is fair you ask about this, because NBI is known to be very independent department. But it is a thing of the past that we want to stand out in ways that do not fit into the design programme. Like all other departments, we have had our quirks. There is no doubt that we at NBI will do everything we can to fit into the new design concept, just like all other departments. Anything else would be unprofessional,« says Søren Jønsson Granat.

READ ALSO: We showed the University of Copenhagen logo to people on the street. Did they recognise it?

Needs to appear as one university

Designer Signe Lund-Sørensen from the university’s central communications department at Nørregade has worked to prepare the transition from using many logos to using one logo with the king. At time of writing – end of December 2019 – it is not actually possible to locate and download the old logos on the university’s website.

»When I speak to the employees at the faculties, I hear that they are looking forward to it, and they look forward to only having to relate to one colour and one logo,« says Signe Lund-Sørensen.

For those who are interested in history and graphics, there are websites that describe the development of the University of Copenhagen’s logo.

The decision to standardise the logo was made by the Rector’s Office and the six deans. There have been premonitions: The king logo was introduced in 2015 for new contexts, including the university’s communication to potential students, where the faculties were no longer allowed to use their own logo.

According to designer Signe Lund-Sørensen, the old logos are not deeply embedded in students’ consciousness.

»A survey we carried out in the spring showed that many students are not aware of logos and colours. Most students do not differentiate between the University of Copenhagen’s joint logo and their faculty logo. A majority of students recognise and associate the red colour and the UCPH logo with the University of Copenhagen, but many of them do not ascribe any organisational meaning to the faculty-specific colours, and they do not recognise them,« says Signe Lund-Sørensen.

She sums up how, in the year 2000, the University of Copenhagen got the current design concept with the red logo with the king in the seal with two circles below it. At the same time, each faculty was given a variant of the logo with its own colour and content in the seal.

At the Faculty of Theology, the challenges are easily resolved, according to Alice Petersen, who is a communications staff member there.

»It’s not as big a mouthful as I had feared. The Faculty of Theology’s recruitment material and part of our external communication has used the royal logo for a long time. I think this makes up 80 per cent of it,« she says.

The rest of the work in introducing a new design template is about introducing the king logo on all new publications, and the secretaries have been busy replacing the rooms’ signage, while paper with the old logo from the Faculty of Theology will be used for drafts, according to Alice Petersen.

»The decision to change the logo does not come out of the blue, but is the result of a long process, and the people who I have spoken to accept it. There may be some people who feel a closer association to our old logo, but as a communications staff member I look forward to it,« says Alice Petersen.

There is one place where the old logo at the Faculty of Theology will be allowed to stay:

»When it comes to the film covering of some of our glass walls here at the faculty, we have decided to let them stay because the old logo is only used in a decorative context,« says Alice Petersen.

So if you, one day, see a glass door with a picture of a pigeon with 10 small stars on top, floating like a halo, you are, in all likelihood, at the Faculty of Theology.