Freaks — In the basement of the old Royal Veterinary and Agricultural University deformed animals are kept in formalin. The veterinary collection of deformities has lost its scientific value, but it is a cultural treasure that is in danger of disappearing 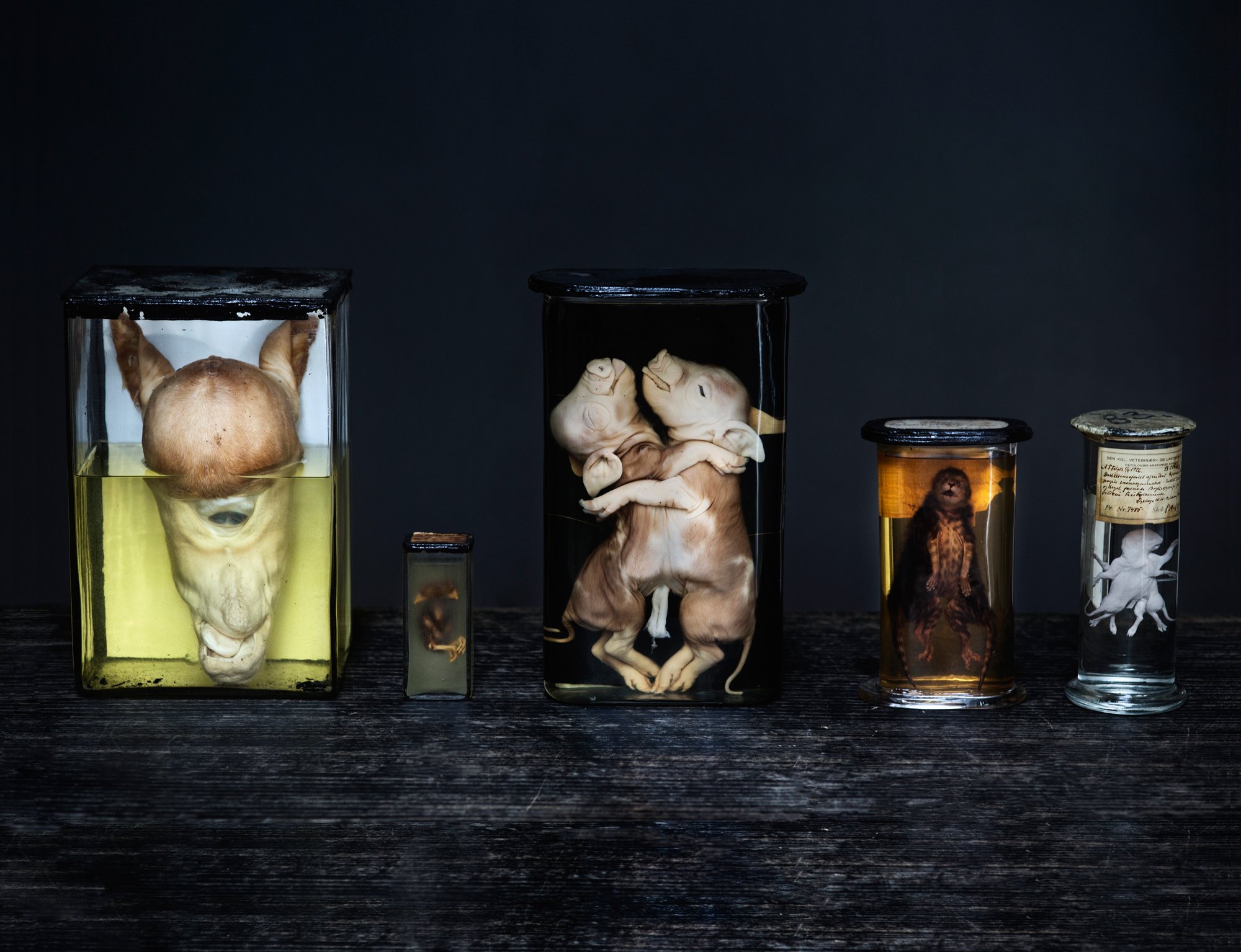 Specimens - Five freaks from the collection of deformities in the basement of the old Royal Veterinary and Agricultural University buildings in Frederiksberg
image: Lizette Kabré
by: Sofie Hansen
Journalist

A long, low-ceilingcorridor. Glass showcases along the wall. A four-legged duckling behind glass. A pig with a single large blue eye in its forehead. A kitten with eight legs and two tails.

We are in the collection of deformities , University of Copenhagen. Its full name is the pathological-anatomical collection, and preserved here are animals with deformities and tissue samples with rare disease manifestations such as rinderpest – today eradicated worldwide.

The liquid has sunk in the glass cylinders that hold the hidden animals. The formalin has evaporated and has in some glasses assumed a yellowish muddy color. The collection has been allowed to take care of itself since the 1960’s when slides and film took on as a medium for the teaching of veterinary students.

“As an educational teaching tool, the collection has outlived itself. The specimens’ colours fade, and the pathological changes are no longer so clear. It is really extremely rare that we use the collection nowadays,” says Professor Henrik Elvang Jensen from the Department of Veterinary Disease Biology. 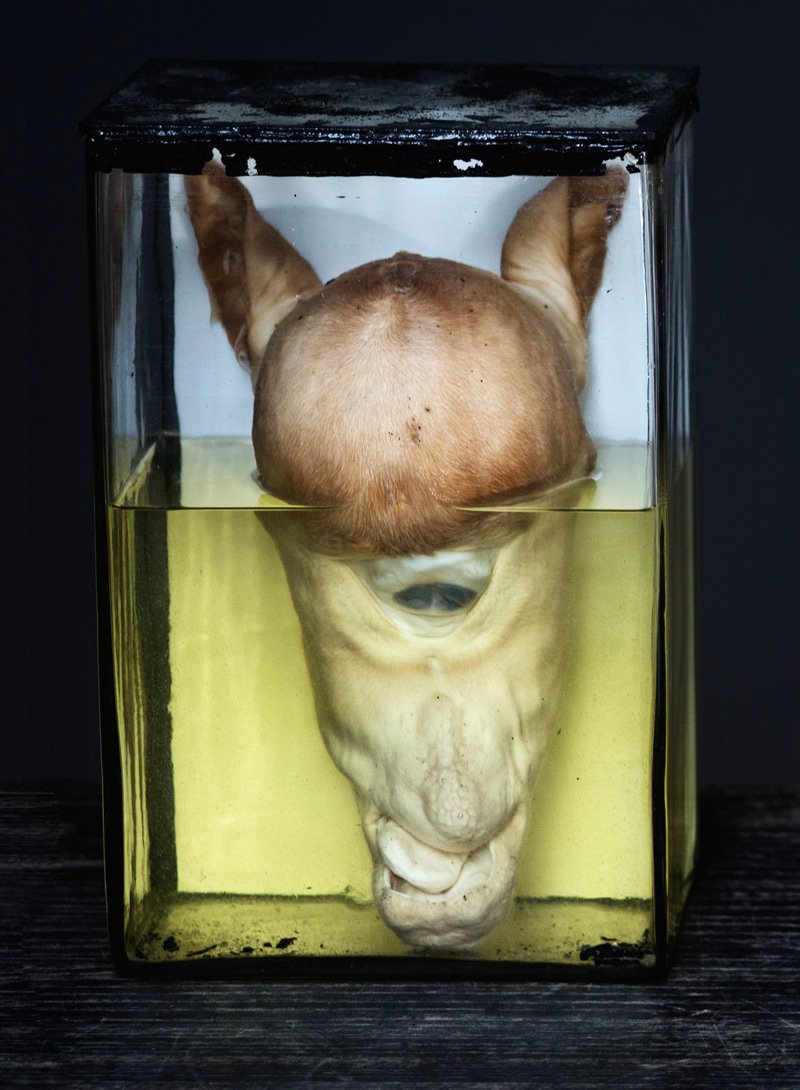 Cyclops Horse from 1923 - The cyclops eye in the middle of the forehead is actually two, merged, eyes, and you can sense a white column where the eyes have grown together. The university received in 2014 a cyclops horse, whose head was preserved in a bucket of methylated spirits and which will be added to the collection. The new cyclops horse is the only addition in the last 25 years.
image: Lizette Kabré

Uniavisen met Professor Elvang Jensen in his office at Frederiksberg Campus two floors above the stowed away deformities.

On his bookshelf is the skull of a sheep, a relic from the days when teachers could not rely on photographs, but had to gather and preserve pathological cases to teach students about animal diseases. Back then preservation substances were the only alternative to drawn-up posters.

Bones of horses were some of the first items to be collected by the collection’s founder P.C. Abildgaard in the late 1700s. He was a doctor and was sent by the king on a study trip to Lyon, where there was a veterinary school, due to the eruption of the rinderpest cattle plague. He returned home and founded Denmark’s first – and the world’s second oldest – school for the training of veterinarians – the forerunner of the current veterinary school on the University of Copenhagen’s Frederiksberg Campus. Abildgaard’s horse bones are still stored in the attic of the university.

The collection had its heyday between the late 1800s and the 1950s, when most of the specimens were prepared. The deformities were donated by veterinarians in private practice and slaughterhouse veterinarians who had made noteworthy discoveries.

“At the time the collection consisted of more than 10,000 specimens. They built a whole building for it,” says Henrik Elvang Jensen and points towards one of the elegant four-story buildings of brick, which today houses classrooms, laboratories and offices. 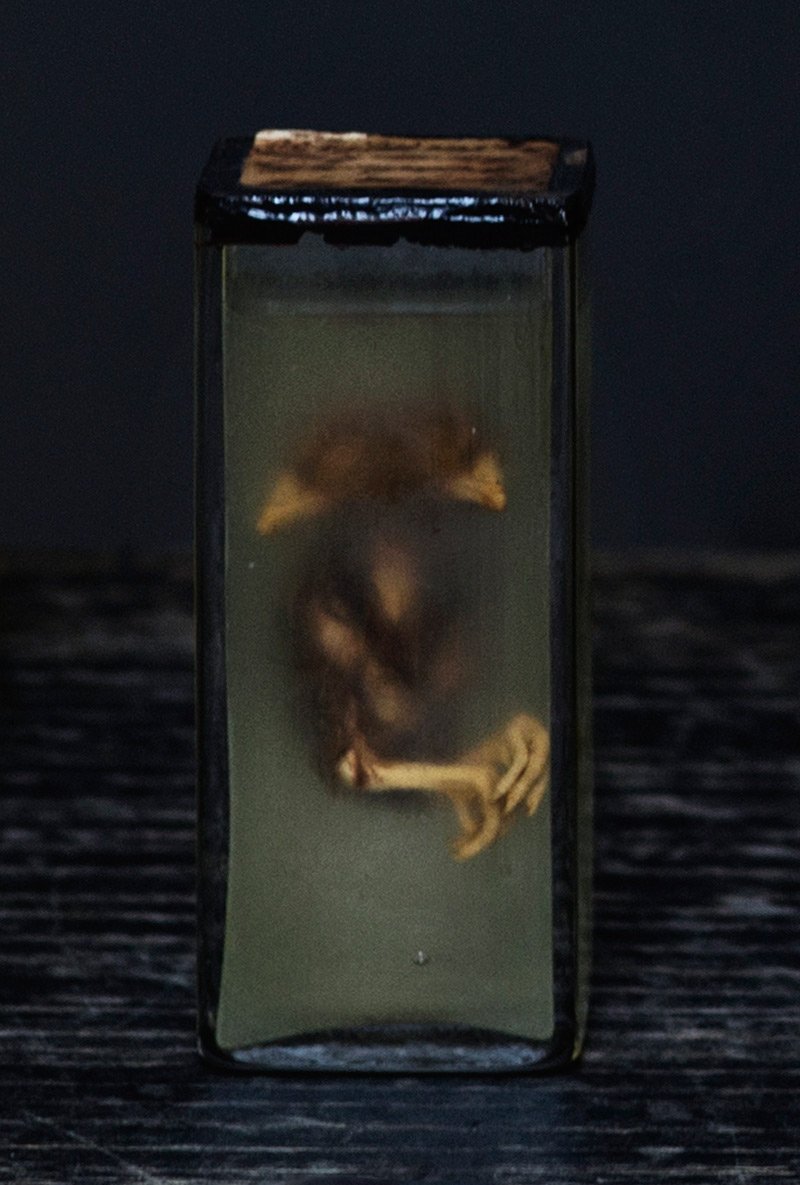 Two-headed bird - The specimens are preserved in Kaiserling solution, a carcinogenic mixture of formalin, potassium nitrate and potassium acetate. The solution should reportedly maintain the specimen’s original colour. In the specimen collection however, the colour is faded in several specimens, and in the two-headed bird glass the liquid has for some reason assumed a yellowish muddy colour.
image: Lizette Kabré

Deformed animals were not the only thing that were collected for the old university. Minerals, agricultural machinery, and plants were among the objects catalogued and exhibited for educational purposes. At the agricultural university alone there were 25 collections. Today they are greatly reduced and scattered across the Science and Health faculties, as well as various science museums.

The largest part of the original collection of deformities was discarded in the 1980’s.

As a teaching tool, the collection has outlived its usefulness. The specimens’ colour fades, and the pathological changes are no longer so clear.

“Over 9,000 specimens were destroyed. A group of associate professors and professors were set to assess what was most worthy of preservation,” says Henrik Elvang Jensen. He was then a post-graduate student and remembers how the specimens were sent for destruction at a facility for hazardous waste.

He talks about the destruction without nostalgia.

“I think the collection has a great cultural value. But it has no scientific or educational value, and I therefore also believe that it was the right choice to use the space for labs and classrooms. Before this, you could hardly be there as the museum had taken over everything,” he says.

“The problem is also that it costs alot of money to maintain such a collection. We’ve got a bit of private funding for maintenance, but it’s not enough.” 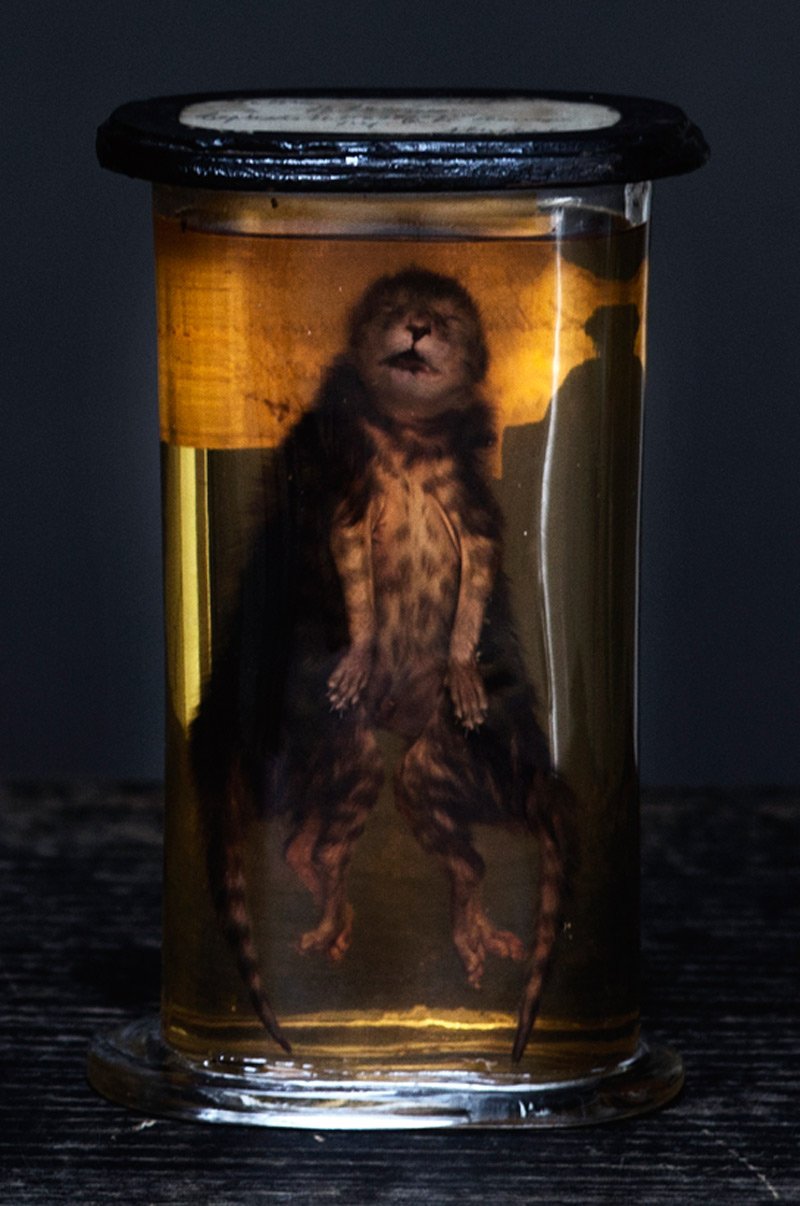 Siamese cat twins I - You might think that this was a single cat with an extra set of limbs behind, but the glass contains Siamese twins, which in technical terms is referred to as mono-symmetrical cephalothoracophagus.
image: Lizette Kabré 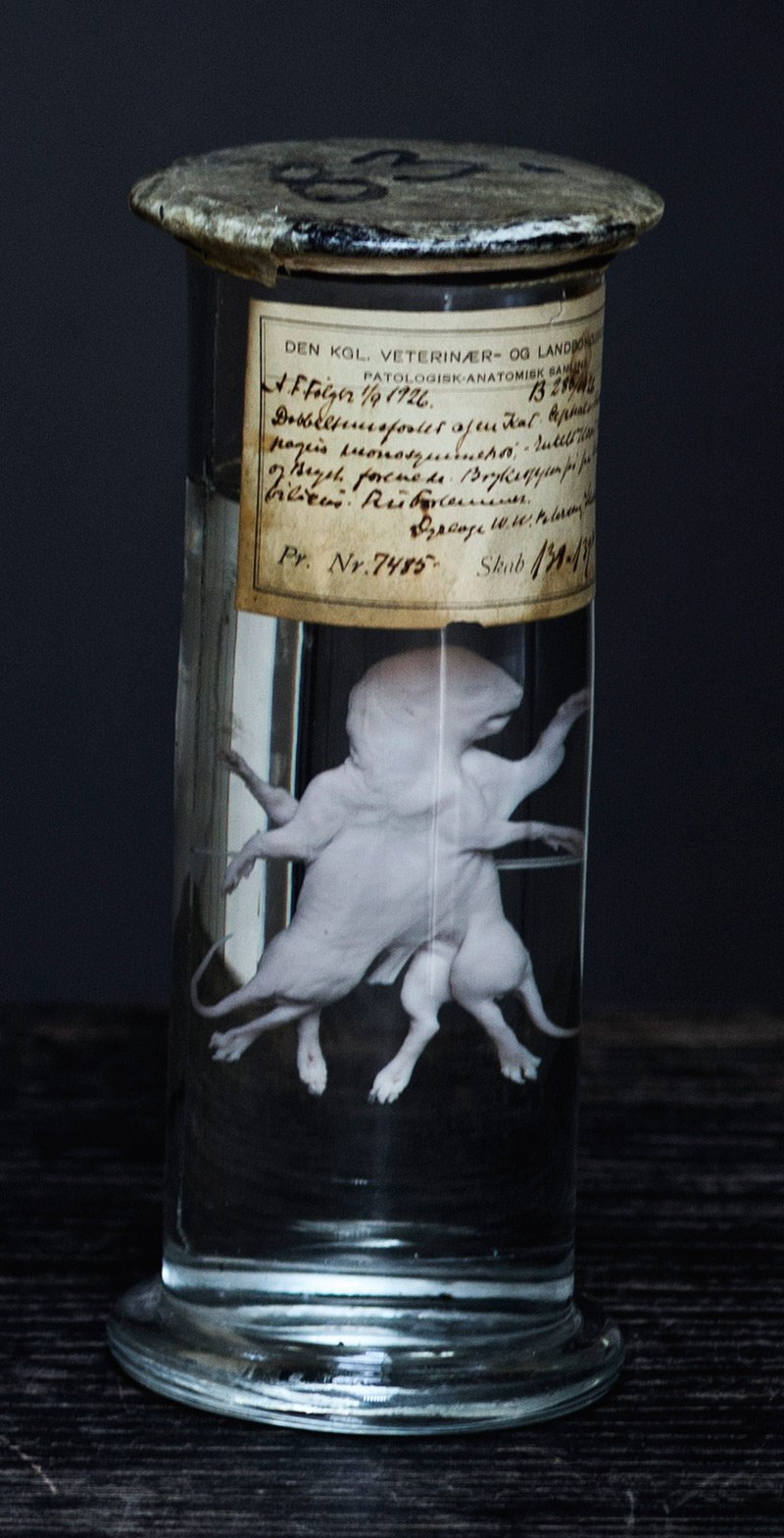 Siamese cat twins II - The pale pair of Siamese twins has four cat front legs, four hind legs four and two tails, but only one head. The pale color is due to the kittens not being fully developed, and the specimen is probably an aborted foetus.
image: Lizette Kabré 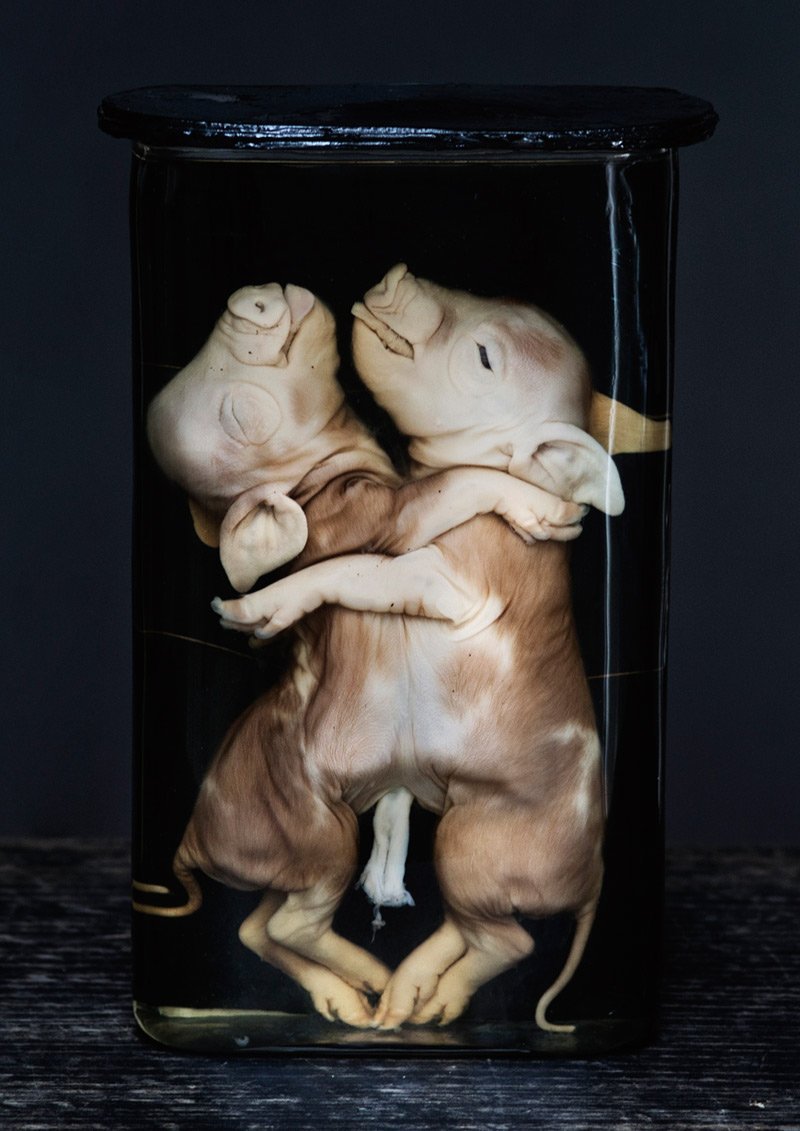 Dancing pigs - They look like a dancing couple, but the close embrace is due to a Siamese joint along the belly. Today, Siamese animal twins are put down at birth, while animals with minor deformities, such as a small set of extra legs or supernumerary toes, are allowed to live if they otherwise show normal behavior.
image: Lizette Kabré

»Something has to happen now, before it is too late«

The collections are in need of an infusion of capital if they are to survive. This is the conclusion of conservator student Annika Normann’s thesis, soon to be finished. She has spent a year tracking down and taking a closer look at the agricultural university’s forgotten collections to find out what it would require if they were to be transferred to a museum.

“Something has to happen now, for it will soon be too late. The collections are decaying and disappearing. It is time we find a solution,” says Annika Normann.

There is free access to the collection of deformities in the cellar at Ridebanevej 3 in the opening hours 8-16.

The four-legged duckling is Professor Henrik Elvang Jensen’s favourite specimen. “It is the only example of this I have ever seen. This happens very rarely,” he says.

Several of the specimens are in a sorry state. But the records of their origin and their history are good, so they could easily be used in both research or in an exhibition if money was spent on bringing them together again and fixing the worst damage, she says. She adds that it is clear that the original collectors have been dedicated and have done a thorough job. But if the collections are to be safeguarded for the future, it requires money.

“Right now, no one does anything about the collections up and above a few individuals who take the initiative to do it in their spare time. If something should happen with this, it would require that someone higher up in the system takes a decision on it, because right now there is no money for it, neither from the departments nor the museums.”

One of the people who spends a good deal of effort on maintaining the collection of deformities is the pathology officer Frederik Andersen. It is he who has the key to the cabinet of curiosities, and he helps us wheel the heavy specimens up from the basement so they can be photographed.

He would like to set up a museum where collections could be displayed in their entirety, such as the Faculty of Health and Medicine has done it with the Medical Museion.

“In 100 years time we will not have anything left to exhibit from today. We have stopped collecting, and that is that,” he says, and lifts the cyclops horse and dancing pigs back into their storage closet.