Funeral sermon for a noblewoman 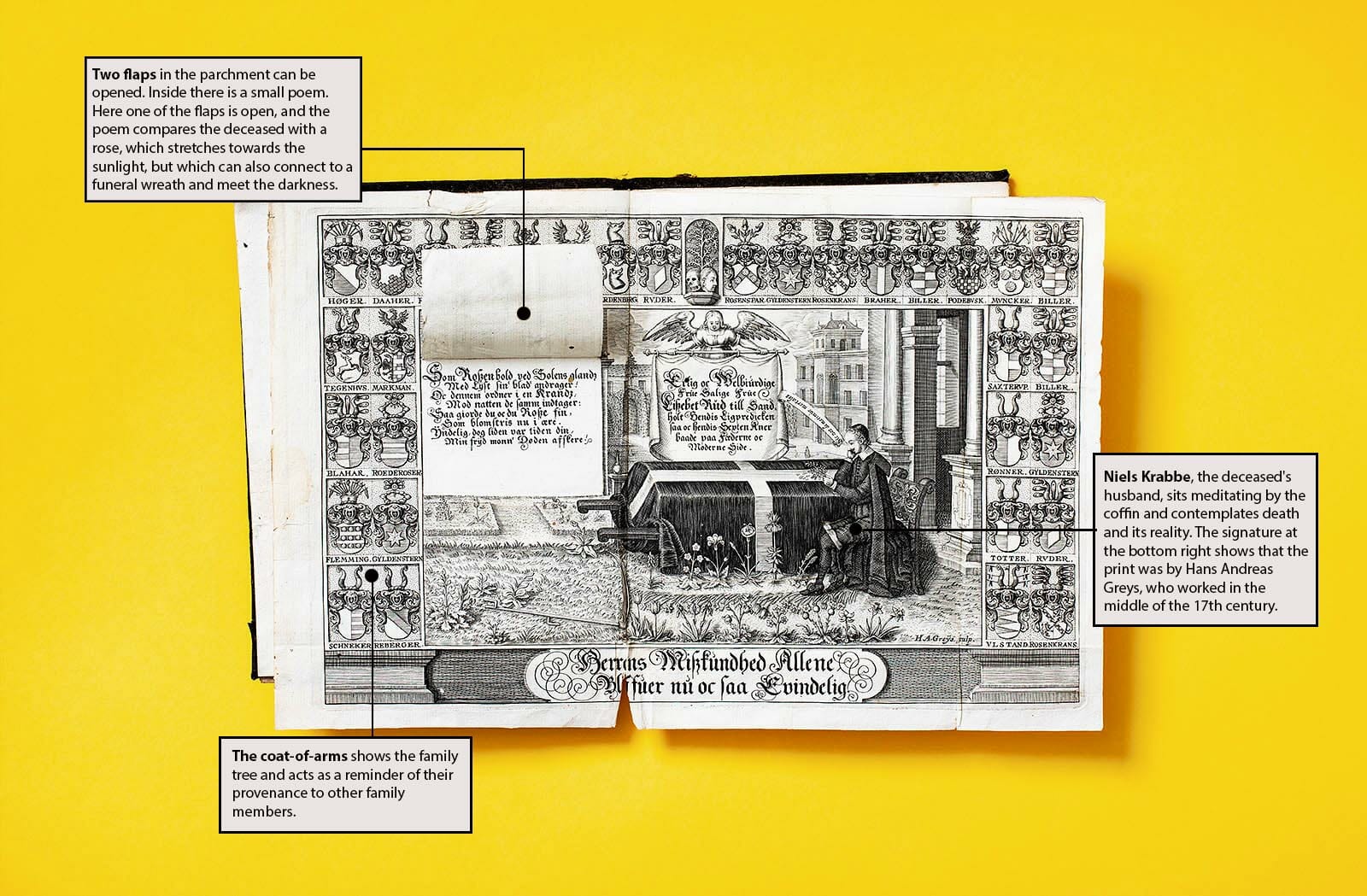 Print released in Copenhagen in 1650 depicting a nobleman mourning his deceased wife. The engraving is included in a 150 page book, and was a widespread form of literature at the time.

Literature of piety — In the 17th century, the elite had whole books published about their deceased spouses and their exemplary lives. The books probably functioned both as a way to discipline the people, to do good business – and as a good round of gossip.

Noblewoman Lisbeth Corfitzdatter Rud of the Sandholt estate died in 1649. Her husband Niels Krabbe ordered a funeral sermon for her by the Bishop of Zealand, Jesper Rasmussen Brochmand. This later became a 150-page book, including a portrait engraved print, which the printer Melchior Marzan released in Copenhagen in 1650.

Today, it is one of 133 categorised funeral sermons which are a part of and which Lars Cyril Nørgaard, theologian and church historian, has set out to study.

Funeral sermons are idealised representations of the nobility and upper strata of society, and a large part of the sermons involve women and describe the life that, say, a noblewoman ideally should live.

“In this way, they don’t tell us directly what life was like,” says Lars Cyril Nørgaard to avoid misunderstandings.

In fact, they are interesting, because they contain idealising elements, he says, while showing the Lisbeth Rud funeral sermon in a room at the PRIVACY research centre at the Faculty of Theology.

The book’s parchment is thin, and the ornate engravings are sharp enough to have been made 40 years ago.

Funeral sermons were, from the end of the 16th century and until the middle of the 18th century, a popular item on the Danish book market. Lars Cyril Nørgaard believes that this was because someone needed them. The intended reader was the family of the deceased, who could read about themselves and their origins. But the state’s attempt to discipline the population to the true faith was also a part of it.

"As a church historian I must be open to the fact that as printed texts, funeral orations were also a form of gossip.”

In the 17th century, it was the king’s faith that determined how people practiced their faith, and the whole society and its stratification were dependent upon this.

“The funeral orations communicated a social ideal, which in the 17th century was intimately associated with a Christian semantics. Back then, secular society and religion were intertwined. It is therefore interesting in a church historical perspective to understand not what reality is, but how the ideals of, say, being a noble lady should be,” says Lars Cyril Nørgaard.

It is a dominant theme in the sermons, he says, how the woman was a good spouse – and that reading was an important part of noble identity.

“The women should take good care of their children, always be obedient in relation to their husbands, and preferably donate money to the poor. Reading, also seems to have been a gendered activity. These noble women are presented as diligent readers of the Bible and other pious texts, because this activity was related to the home and the private sphere, while men are assigned heroic and extroverted activities,” says Lars Cyril Nørgaard.

Had to weigh his words

Bishop of Zealand Jesper Brochmand (1585-1652) plays an important role in all the funeral sermons that Lars Cyril Nørgaard displays at the Faculty of Theology, where Brochmand was a professor in the period 1610-1638.

Master’s in theology from the University of Copenhagen in 2011.

He discovered, in connection with his PhD work, the collection of funeral orations at the Faculty of Theology by chance.

He is an international postdoc, financed by the Independent Research Fund Denmark. Lars Cyril Nørgaard’s current work is about Mme de Maintenon.

“He was one of the driving forces behind the dogmatic system at the University of Copenhagen which is now called Lutheran orthodoxy. Put simply: It is perceived by some to be not very sincere or pious because it is characterised by a very strict, and logical, system thinking,” says Lars Cyril Nørgaard.

The bishop, however, was also in demand throughout the country as a preacher, but in the meeting between the populace and the university theology, Brochmand had to weigh his words on dogmatics with care:

“In some of the funeral sermons, for example, there are descriptions of personal revelations, miracles, where a woman on her deathbed report seeing an angel come down from heaven. Confronted with experiences like these, which the dependents relayed on to the preacher, you can see Brochmand wavering. He suggests that yes, it may be that she saw it, but the rest of us can’t know anything about it. As a theologian and a bishop he would not, and could not, rubber-stamp any miracle that was not linked to the words of the Bible. Because for him the experience of death had to have a correct theological interpretation,” says Lars Cyril Nørgaard.

A researcher in piety literature

In Bibliotheca Danica – which is a catalogue of all Danish books printed before 1830 – funeral orations are listed as personal history, but since there are church services in every funeral oration, Lars Cyril Nørgaard finds them interesting from a church historical viewpoint. As printed texts, in book form, the sermons reach out beyond the service and its ritual process, and you therefore have to ask about their more general appeal in the form of a literature of piety.

“I need to, as a church historian, be open to the fact that they also, for example, are a form of gossip. I should not therefore zero in on their theological language alone, because other considerations could be just as important,” says Lars Cyril Nørgaard and believes that it is necessary to ask why the books, that took such a substantial effort to make, were published at all.

“In wider circles in 17th century Denmark they must have been interested in buying sermons over deceased nobles. Perhaps to read about an exemplary person? I would like to look into this,” says Lars Cyril Nørgaard.

When he has completed his international postdoc at Durham University in the UK and at the Sorbonne IV in France in 18 months time, he wants to continue his research on Danish funeral sermons.