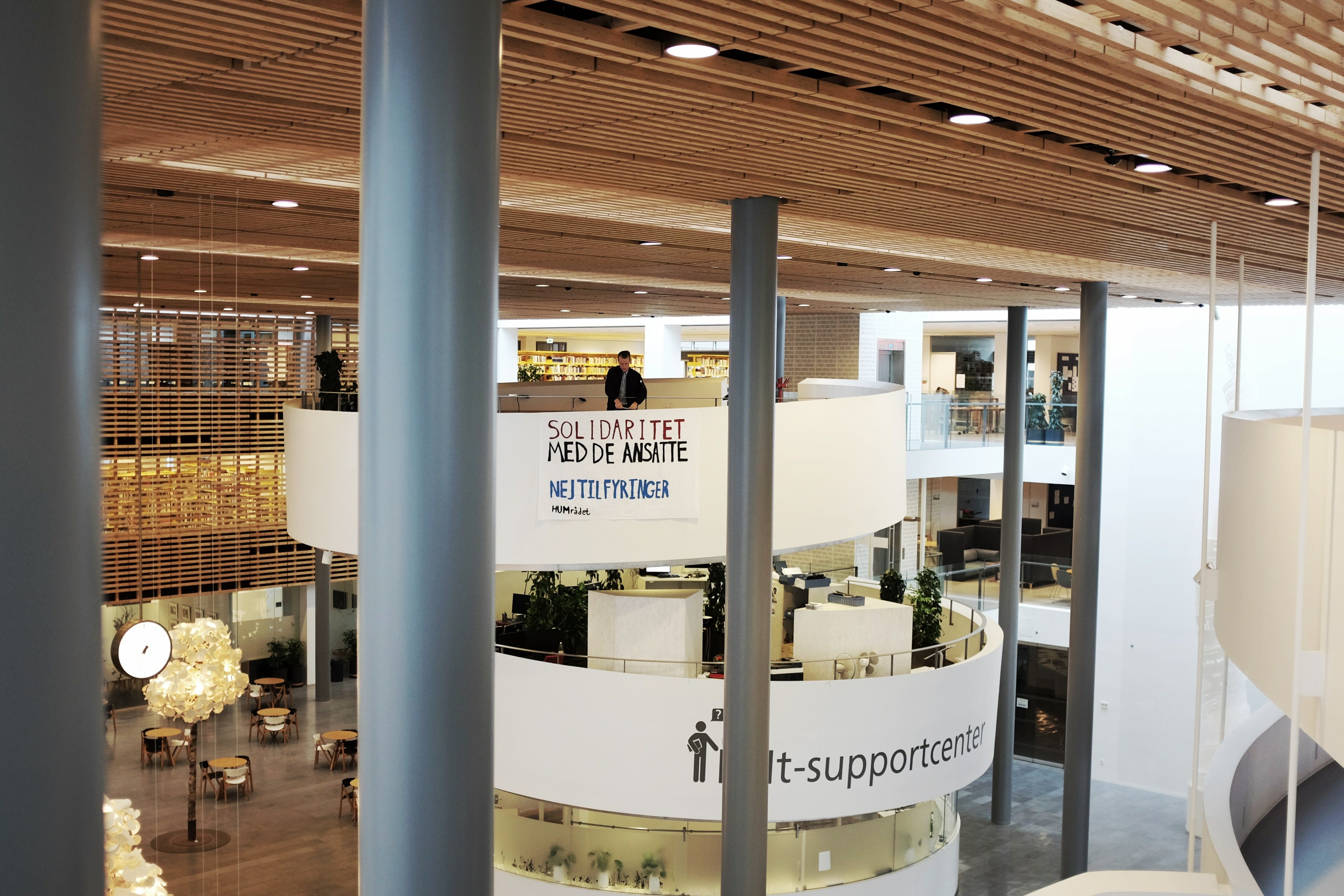 Students of the Humanities Council put up a banner in support of employees during layoffs at the Faculty of Humanities.
image: Lene Munk

13 were told they had lost their jobs, including 2 offered part time, at the Faculty of Humanities during a round of layoffs on 8th May. A further 24 staff accepted voluntary redundancy. Staff representative says the process has gone on for too long and that it has negatively affected the working environment. Students fear that the cuts will lead to cuts in the course offering. But the dean dismisses their fears.

All teaching was cancelled Wednesday 8th May between 8 and 10 am at the Faculty of Humanities, University of Copenhagen after management had announced a round of layoffs among employees.

A small group of students had got up early to put up a banner from the top landing on the square inside the KUA2 building.

»Solidarity with staff – no layoffs,« the banner proclaimed. It was put up at 07:30 so employees could see it as they turned up for work. Staff had been told by management to be in their offices at 9 in the morning.

Representative for the researchers at the faculty Peter Birkelund Andersen says that 13 members of staff were given their notice: 11 of them were involuntarily sacked, with a further two asked, involuntarily, to go part time. Prior to this, 24 staff had accepted a voluntary redundancy scheme, with three applying to work part time.

35, in total, have thereby had to say goodbye to the University of Copenhagen, with five going part time (subject to the outcome of a consultation process).

It is the third round of layoffs that Faculty of Humanities has had to go through within a few years. There were also layoffs in 2011 and 2016 – and several smaller courses have been culled along the way.

The University of Copenhagen has reduced its staff numbers by more than 700 since 2015 primarily due to politically ordained cuts to government subsidies of two per cent a year. This has reduced the university’s annual budget by DKK 150 million relative to 2015.

Malte Kolze was the student that put up the banner on South Campus Wednesday morning. He is a student of European ethnology, and chairman of the student organisation Humanities Council. He is concerned that the workforce has been thinned out again. He fears that the range of courses offered will be reduced and more uncertain – and that some subjects will actually close down.

There could easily be somewhere where there are more savings to be found. But I cannot see us not ending up with fewer courses and a narrower course offering.

»Language programmes, for example, like Portuguese, Italian, French and German are already under pressure. If they lose an instructor, it will affect the courses offered to students,« says Malte Kolze.

Staff representative Peter Birkelund Andersen says that he can understand the students are worried.

»This is one of the places where you can really go in and make some real savings: Offer fewer courses. The previous round of cuts systematically merged courses, and required more students on the courses offered if they were to be set up and implemented. So there is not much to go for here. There could easily be somewhere where there are more savings to be found. But I cannot see us not ending up with fewer courses and a narrower course offering.«

So the fear is not unfounded?

»It is actually a head of studies that you should ask, but logically, I believe, the students are correct.«

It was not possible to get an interview with the Dean of the Faculty of Humanities Jesper Kallestrup before the deadline. But in an email he writes that there is »no reason to fear that this round of cuts, in itself, will lead to a reduction in the range of courses, or that individual courses have to close.«

Staff representative: The process has gone on for too long

The students who showed up to support the employees sat behind their banners for two hours during the cancelled teaching in solidarity with those who were affected by the round of layoffs.

The staff who had been fired were sent an email shortly after 9 am that they had to turn up for a meeting – including the name and email of the staff representative that they had the option of taking with them.

»The day was conducted in a proper and reasonable way. It has been handled professionally on the part of the management,« says Peter Birkelund Andersen.

He is not, however, devoid of criticism:

»When I look back on the whole process now, it was only launched late in the spring, but it was already announced before Christmas. It would have been easier on the working environment if they had kept a tight schedule from the time they knew that it (the round of layoffs, ed.) was on the way.«

We have tried to expedite this process as quickly as possible. But because we did not want to do across-the-board cuts, we have had a longer dialogue with the department managements on how we could best do it at the local level.

Jesper Kallestrup, Dean of the Faculty of Humanities

»The working environment has been suffering from it going on for such a long time. In the future, I will argue far more strongly for it to be carried out over a shorter period of time than I have done in this process. This is also one of the things we will take up in the internal evaluation with management and HR when the time comes. This has been an unnecessary burden on the working environment.«

»We tried to expedite this process as quickly as possible. But because we did not want to do across-the-board cuts, we have had a longer dialogue with the department managements on how we could best do it at the local level.«