»I don’t dare think beyond my current semester« 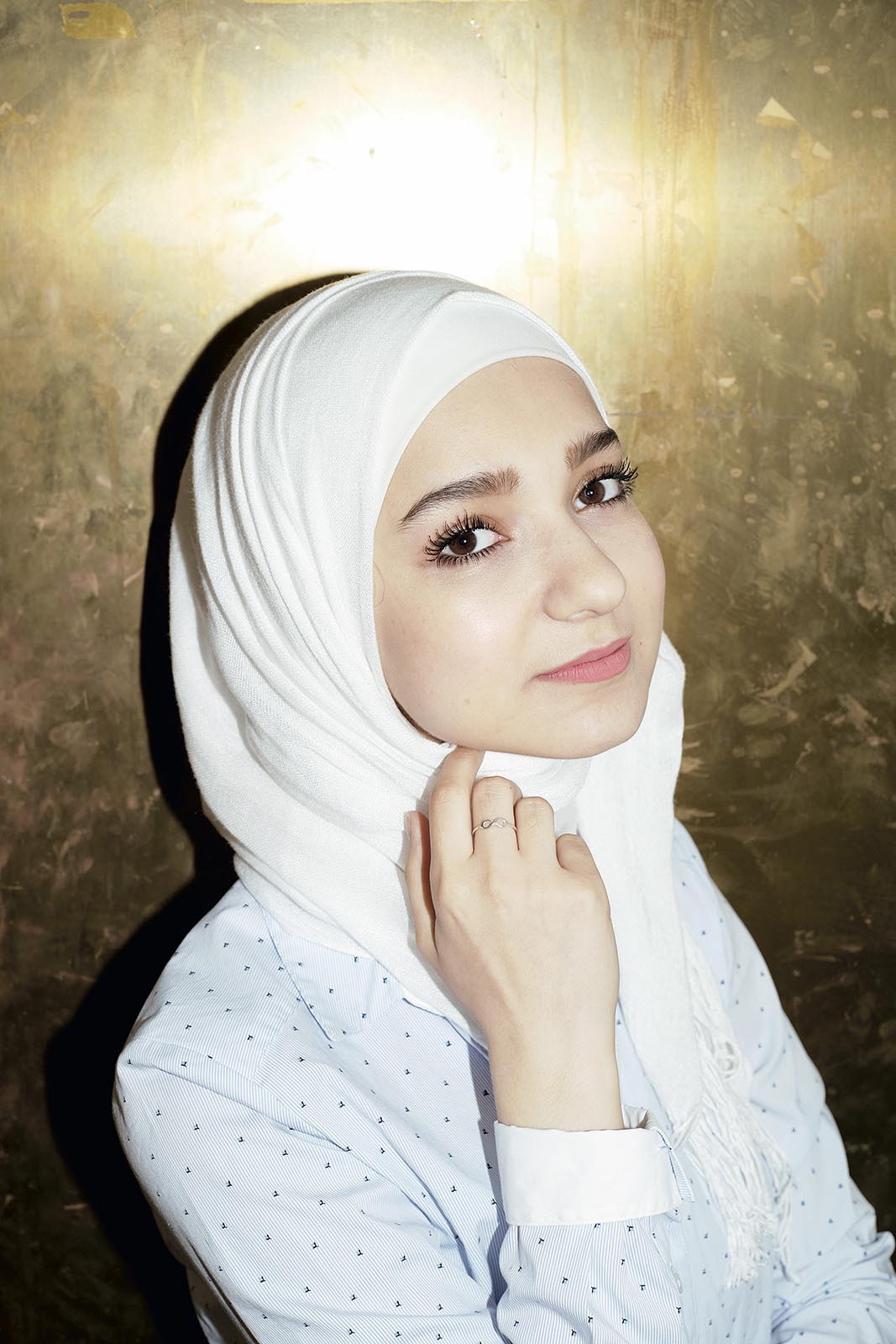 Politics — Sedra Al-Yousef fled from Syria four years ago. Today, medicine studies are her safe space, but she fears being sent back to her homeland due to the immigration policies of the parliamentary majority.

Sedra Al-Yousef has just finished a five-hour written exam on cells and tissues.

»It was a tough exam, but I think it went well,« she says.

In one and a half months, it will be precisely one year since she opened her email to find a welcome letter to study at the Faculty of Health and Medical Sciences at the University of Copenhagen (UCPH).

»I cried from happiness. I knew that I had the marks to get in. But it was still very overwhelming. It’s a dream I have fought for, and it didn’t come easily to me. I remember that I read the email in the middle of the night and called my whole family,« she says.

While it may seem like an ordinary success story from the outside, Sedra fled from Syria to Denmark as a 16-year-old. Today, four years later, she speaks fluent Danish, finished high school in record time with an 11.7 average and is now studying to be a doctor.

It is stressful not to know if I will be sent home. In Syria, we live in constant anxiety about the future. I thought this part was over when I moved to Denmark. But now I am back to living in fear

In many ways, her life resembles that of her co-students. The days are full of readings, books and social events at the faculty. And then there is everything else: friends, study groups, evenings in the collegium kitchen and a student job on the weekends.

»I enjoy my life as a med student. It’s completely different to high school. I feel that I have more in common with my classmates. We are interested in the same things and we like to discuss things together,« she says.

But the past few months, she has struggled to sleep. She is afraid, she says. She fears her life could be uprooted once more in an instant and that she will see everything she has built taken from her. Because not everyone believes that a woman like Sedra has the right to remain in Denmark.

One major change to prompt attention is that residence permits for refugees will henceforth be temporary.

The current immgration regulations now hold that refugee and family reunification permits are withdrawn or omitted, unless they are in direct conflict with Denmark’s international obligations.

In February, a majority of the Danish parliament (the parties Venstre, Konservative, Liberale Alliance, Socialdemokratiet and DF) adopted several immigration restrictions aimed at shifting the focus from integration to rapid deportation of refugees, dubbed a »paradigm shift« Under the new rules, the integration payment benefit has been slashed and redubbed a »deportation benefit« and all permits in Denmark are temporary as a departure point. In other words: Refugees are to be sent back to their homelands as soon as possible.

Does not want to help Assad

For Sedra, this means that she can no longer be certain that she will finish her education and that her future in Denmark might only be temporary.

»I don’t dare think beyond my current semester. Hope for the future is gone. I am trying to focus on my education, but uncertainty and the fear of being sent back is making it tough to concentrate on my studies,« she says.

According to a report from the Danish Department of Immigration, it has become more safe in those areas of Syria controlled by government forces. Particularly in the Damascus region, where the security situation has reportedly significantly improved.

This has sparked enthusiasm from several Danish politicians. At the end of April, the first eight Syrians from the Damascus region received a refusal to have their permits extended. Meanwhile, the debate on repatriation has intensified.

»I have thought a lot about whether I am amoral, whether I am cheating my homeland. But I don’t think I’m doing that. I want to help make a difference to Syrians, but I don’t want to help Assad reestablish a dictatorship which we protested against and ended up fleeing from,« she says.

Sedra was 12 years old when she sat in her family home watching as the TV showed Daraa bombarded by military helicopters.

Shortly before that, revolution in the city had begun with peaceful protests, where people took to the streets to demand more democracy and freedom of speech – without luck.

»The protestors were either killed or jailed, and children who wrote »Down with Assad« on the walls were tortured by the regime’s secret police. They pulled their nails out – these were children my own age,« says Sedra.

Until then, she had enjoyed a secure life in Aleppo.

»I was raised in a family where education and hard work matter a lot. My father had his own dentistry clinic and my mother was a midwife and had worked for the UN and Ministry of Health. We were well-off, financially. I went to a private school and my parents ensured that I could go to basketball and violin.«

Everything disappeared, however, when the diverse protests across Syria eight years ago developed into a war, which today has cost more than half a million Syrian lives and sent millions fleeing their homeland.

Besides working, Sedra’s father was politically active and a member of the opposition in Parliament.

»At the beginning of the revolution, he used his political voice to battle for more democratic rule. He spoke up against the government’s torture and murder of innocents and was threatened that if he didn’t withdraw, it would impact him and his family. But my father would not be silent, so we had to flee,« says Sedra.

A surgeon, a dentist and a midwife

Sedra’s family fled to Denmark four years ago, shortly before she turned 17.

She arrived in a country where everything seemed strange and unknown. The highly populated city life Sedra knew from Syria was swapped for flat fields. The culture was different, and the language hard to understand.

I don’t see myself as a victim. I am proud to be a refugee. It is part of my identity.

»It was not easy. My father, who was a respected dentist in Idlip, was suddenly heartbroken in an asylum centre in Southern Jutland. I missed my friends and the life I had before the war. But at one point, I had to face up to the fact that I would never get that life back,« says Sedra.

»Our life in Syria was completely destroyed. Assad’s regime burned our house down. The same happened to my father’s clinic and our summer house. I knew that it was necessary to stop thinking about the past if I was to stand on my own two feet again and realise my hopes of making a good life in Denmark.«

For Sedra, the motivation to gain an education and become part of Danish society has helped carry her through:

»I was very aware of what I wanted. I believe that you need to stick with what gives meaning. Therefore I was very ambitious and focused on quickly learning Danish and getting into medicine,« says Sedra.

She has dreamed of being a doctor since she was a child.

»I have always been curious about finding out how people and the body function. My uncle is a surgeon and my mother is a midwife, so I am probably also inspired by my family. The idea of being able to save lives and make a difference for others means a lot to me,« says Sedra.

»Study is my safe space«

Sedra fears having to abandon her studies, work and social life in Denmark and be forced to return to Syria to rebuild Assad’s regime.

»It is stressful not to know if I will be sent home. In Syria, we live in constant anxiety about the future. I thought this part was over when I moved to Denmark. But now I am back to living in fear,« says Sedra.

Background: Moved from Syria to Denmark with her family as a refugee with in December 2014.

But it is not just the concrete fear of being sent home which makes Sedra lose sleep. The problem is something more existential – not feeling like a person.

»What hits me is politicians’ emphasis on the fact that I am only a temporary refugee. In this way, they reduce me to a thing which can move around wherever it wants. I don’t think it’s nice to be reduced to a temporary person. It makes you feel worthless.«

She looks out of the window at her collegium and down Jagtvej, where the morning traffic glides slowly through the city. After four years in Denmark, she says that she is in the midst of an identity crisis.

»The paradigm shift and debate on repatriation is constantly forcing me to remember that I am a refugee instead of being able to enjoy my life as a student. I don’t see myself as a victim. I am proud to be a refugee. It is part of my identity. But the dehumanising way they talk about refugees has left me feeling like a second-rate citizen. I would like to be seen as the person I am.«

And who is that?

»When I present myself, I usually say that I’m a student and refugee. But I am also a friend, classmate, young woman and citizen in Denmark. And like everyone else, I need a stable life where I can concentrate on my studies and work and being there for the people around me.«

For Sedra, medicine is a safe space, where she feels on equal footing with her fellow students. She has found a community where the focus is not on being a refugee but on her passion.

Sedra also has a student job as an FADL shift worker, where she takes nursing shifts over the weekend at various hospitals.

»I think it’s very exciting. For me it’s a way of getting in contact with the patients and doctors and experiencing how it works in the wider world,« says Sedra.

She dreams of a job as a heart surgeon or neurologist in Denmark and to have a family at some point.

»This will be a good future for me. I want to be part of creating a democratic change in Syria, but I don’t believe that we as a population can do it alone. We tried to during the Syrian revolution. It didn’t create any change. On the contrary, it led to a huge catastrophe, so I don’t think that I will ever come back to Syria. For me, it’s about utilizing the potential I have to create value wherever in the world I am. And right now that is in Denmark.«