»I was supposed to be a sports journalist« 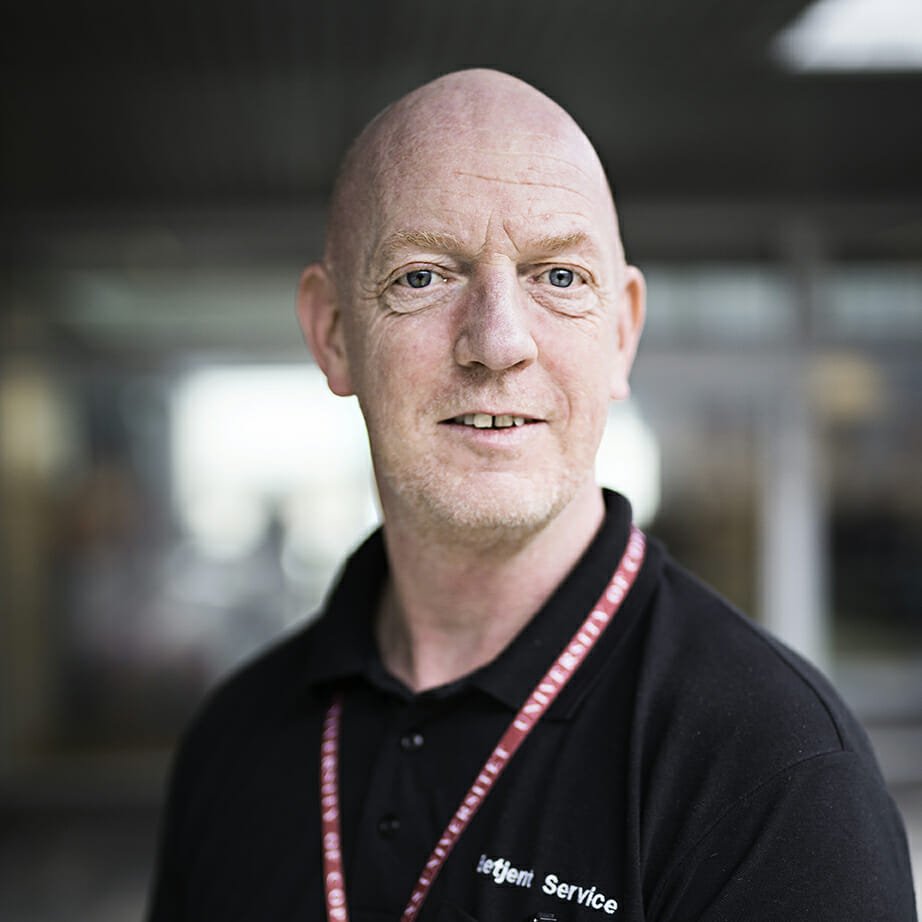 Jesper Ovesen has been a grounds officer at the University of Copenhagen for 20 years. If it were up to him, he’d work there 15 years more.
image: Lizette Kabré

My job — »Of course, I should have continued with high school. But never mind that, I don’t regret things. I am happy with where I am today,” says University of Copenhagen grounds officer Jesper Ovesen.

Jesper Ovesen, son of an investigative journalist who exposed and several absestos scandals, dropped out of high school because it was a little too quiet, and he wanted to go out into the world and earn his own money. He had also been an intern at the newspaper Det Fri Aktuelt and Radio Rita, because he planned to be a sports journalist.

»It was with the best intentions that my parents gave me huge freedom to decide. You could say that I got a little too much space to take the wrong track.«

50 years old.  Grounds officer at South Campus. Employed in 1999 at the student administration in Fiolstræde, employed by the Humanities Faculty since 2009. Completed an apprenticeship in retail, and has been an independent driver and postman before his time at UCPH. Works out in the fitness centre 4-5 days per week.

Jesper went on to become an apprentice at Golman Herrekvipering (Golman Haberdashery), but left the job because he »didn’t have the energy to stand and smile constantly.« This revelation seems slightly ironic, because Jesper has one of Søndre Campus’ biggest smiles.

Today, Jesper does not need to spend time choosing his outfit, because he has a work uniform from Helly Hansen with “The Humanities Faculty” embroidered in Danish across the chest of his fleece shirt.

The working day begins at 7am. The classrooms and lecture theatres must be prepared for studies at UCPH’s most populous faculty. The mail must be sorted, special arrangements and career fairs set up, handymen need to be hired. ID and key cards don’t issue themselves, packages must be handled and students serviced.

And along the way, there are jokes exchanged – both with close colleagues in the hallways, and with professors and students.

“We get along well, all of us. We tease each other – in a good way, of course, and we look out for each other. I would not say that I am happy-go-lucky, but there is no reason to make things more difficult than they are.”

A sports enthusiast, Jesper spent many years as a football trainer for ’s boys. However he has cut down on this to have enough time for his own fitness activities, his family in a house on Røde Mellemvej and walks with Freja, a beloved Danish-Swedish farm dog.

As to whether Jesper is up for ten more years at UCPH, he answers:

»Yes. And ideally 15, if it were up to me. I have not woken up one single day over my twenty years at the University of Copenhagen and thought, oh I don’t feel like it today. I had plenty of those days in my years as a postman.«

Jesper enjoys the environment and atmosphere of the buildings along Karen Blixen’s Vej – and that is not because of the new HAY furniture, he smiles, but because he values his conversations with the faculty’s employees. They discuss any topic, in particular politics, history and social conditions:

»Annette Lassen has written the best books on the Icelandic Sagas, which interests me! Jørgen Bæk Simonsen knows everything about history – and he invited me to a lecture one day after we began chatting. The head of INSS and I both grew up on Gasværksvej, so we share stories about the neighbourhood of Vesterbro. And it’s always exciting to meet Vincent Hendricks. The professors have no airs, and everyone wants to talk if you approach them with openness and curiosity.«

However, one thing niggles at him. Jesper believes more people have become blind to others around them:

»It might be that I’ve become old. But I’ve begun to get bothered by the small things. Outside, there are six men on a bench, smoking under a no-smoking sign. I am a smoker myself, but it would be nice if people had a little more respect. Think about how nice it is here, and how good it could be, and pick up a cup and take it with you on the way to the canteen.«

There’s no reason to make things more difficult than they are.