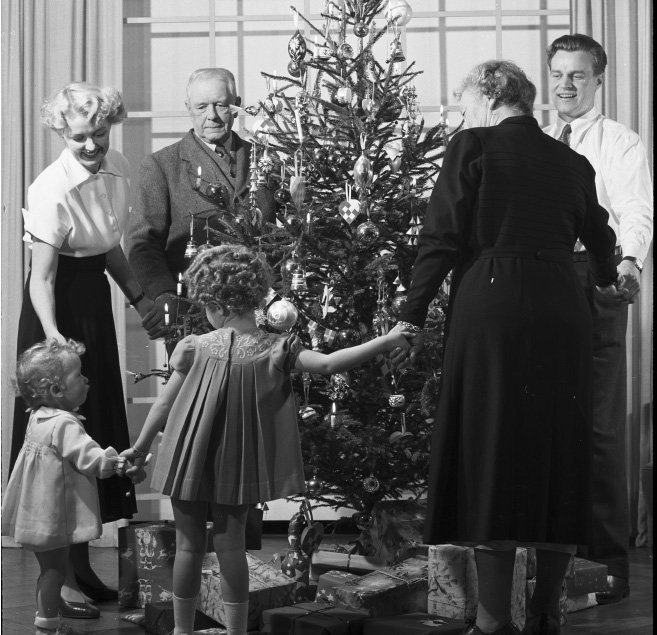 Danish families have a tradition to dance around their Christmas trees, singing songs, at Christmas
image: Sven Türck, Department of Maps, Prints and Photographs, The Royal Library, Denmark, Flickr license

Danes get into the holiday spirit with these classic Christmas songs. Here is their translation, and interpretation, by the University Post's Christmas expert

The month of Christmas has begun. It may be a ‘party of the hearts’ (Danish: ‘hjerternes fest’), but the way to that party is paved with a true bombardment of the senses.

Strolling down the pedestrian street Strøget, we smell burned spruce, caramelized almonds and cinnamon-infused mulled wine. Looking at streets lit by thousands of light bulbs opens your eyes to the splendour of Christmas. Intakes of traditional Christmas food such as pig in 1,000 variations, roasted duck with oranges, and rice pudding give us a taste of what’s in store Christmas Eve. When we touch presents hidden in the closet, it’s a tangible promise of the sweet, material side of Christmas. Our ears, of course, are also an important gateway to our hearts, and Christmas carols and hymns are potent mood maximizers.

So listen up – this is how Danes make noise in December; with crazy, sad and beautiful Christmas songs. (Please note: The translation strategy is completely unauthorized and a bit ‘slangy’ in order to stick to the point of the song).

This song originates from the 18th Century, but it’s very much alive and kicking. It’s extremely short, so here’s the full (and literal) translation of this matter-of-fact-themed song:

The trick is to repeat the song again and again while running around the Christmas tree. After a couple of rounds, someone has to break the chain of hands and take the lead in a tour of the house. Consequently, the entire family runs as fast as possible through all rooms – over beds and up and down staircases – while singing “nu det jul igen og nu det jul igen og…”. It may not be the Christmas favorite for grandpa and grandma, but it’s a nice way of burning some calories after the Christmas meat and grease fest.

We all know that Christmas is expensive and can be a bit stressful due to expansive preparations and expectations that might exceed the actual experience. This was also the case back in the day; the testimony is Sikken voldsom trængsel og alarm (‘What a terrible hustle and bustle’). The song was written in 1848 and it’s a cheerful, cheeky, brand-conscious, family-oriented rendition of Christmas preparations and – eve.

The first stanza goes something like: ”What a terrible hustle and bustle / it’s cold and one has to walk to get warm / the street lights are lit at 4 p.m. / It’ll be a loud evening / in the middle of the street trees and fruit are sold / look at the shop, it’s so shiny / Thousands of goods are for sale / the price is even lower than usual, would you imagine that! / price, price, price, price, price, price”

The 25th of December is church-themed: ”If you’re not a lazy bastard / You get up early Christmas Morning / the bell chimes, and the street is so slippery / the church lights up the quiet night / inside there’s singing and cheerful peace / it’s best when the sermon is bad / because then you get to nap / nap, nap, nap, nap, nap, nap”.

There’s even a bit of product placement in the song as ‘the works of the artist are widely distributed thanks to Hornemann and Bing’ – the names referring to the music publishing company ‘Hornemann & Bing’.

The social scene isn’t dead either, and the author describes how people are dressing up for a stroll in the streets. He’s very happy about some 19th Century social game that I don’t know; ‘to play Christmas and give mortgage’ (anyone??). However, this suggestion is a classic: “Young girl, let’s play hide and seek / just give me a kiss / it is Christmas after all”.

The 1980’s was not a period of great wealth in Denmark, causing much worry relating to the tradition of giving and receiving gifts. Shopping, shiny stores and aggressive ads became provocation to (even more) people. On a warm August day in 1988, the new and highly successful rap group MC Einar came up with the idea of creating a Christmas song: Jul – Det’ cool (Christmas, it’s cool).

Time wasn’t on their side – the band only had a couple of days to write the text. Most things relating to the process of recording (on ‘tape’, remember what that is?) were random; the external drummer was on his way to Jutland, when the band called him, and after a lot of pleading he agreed to help for no more than two hours. When he arrived at the studio (which the band had access to because of another project) there were no proper drums, so he had to improvise. Also, the rapper’s grandmother turned up, and interestingly she got a line in the song: ”Oh dear, is it already…” (see video).

Visual artistry was important too, so a band member produced a quick drawing on a piece of paper depicting Santa Claus wielding his middle finger (the rude gesture!). Thus, the album cover was in place. In other words: Nothing indicated that this rap would prove to be a true Christmas classic – the most played Christmas song in Denmark from 2008 – 2012.

Irony is the key ingredient in Jul – Det’ cool. The rap starts with a paraphrase of the Bible’s Christmas Gospel in combination with the Christmas catalogues. Let the ‘hygge’ begin… Iconic sentences adorn the text such as “the annual migration up and down Strøget” and “We’re traditional people in the land of traditions, so we get cozy (‘hygger os’) as much as we can – especially Magasin (department store) is indispensable”. Furthermore, this is how one of the stanzas goes down:

”Oh dear, is it already… / Christmas, it’s cool, how time flies, nothing has changed since last year / we eat the same things, do the same things / the same things in tv / the same Christmas presents / same financial problems, it’s expensive and hard / solely over-used credit cards / abundance and gluttony with family and friends / the consciousness is dealt with through a charity calendar / it’s time for Christmas parties, traditional pawing, drunk driving, infidelity and disgusting amounts of food / we’ve all tried it before / we know exactly what’s going to happen / dieting in January and all that stuff”

Even Santa Claus is “dreaming of a white beach / far away from snow and Christmas trees”.

It’s hard to be a nissemand (Christmas elf): Danglish galore

The language nerds will love the Christmas tv advent calendar called ‘The Julekalender’. As the title indicates, it’s interlingualism taken to the next level as songs and acting are English and Danish in a seemingly random mashup. Danish idiomatic (non-translatable) expressions are translated into English by the three Christmas elves (the ‘nissemænd’). This Danglish language chaos is hilarious – if you know both languages. I like the reggae version of ‘Long time ago in Bethlehem’, but the favorite has to be ‘It’s hard to be a nissemand’ (It’s hard to be a Christmas elf). It would be missing the point to translate the entire text into English, but here’s an excerpt with English translations of Danish words in parenthesis.

Basically, this is one long whiney song about the hardships of being a Christmas elf at Christmas time. There’s a relentless pressure to perform and deliver as Christmas elves are an important part of the Christmas machinery.

Danes are notoriously (in)famous for making fun of everything and everyone. In the tv advent calendar Jul på Vesterbro (Christmas in Vesterbro), we meet the people who are crawling drunkenly on the bottom of society – aka. Vesterbro. Or at least the parts of Vesterbro left untouched by gentrification. The characters are; Pater Familias, drunk ex-sailor Stewart Stardust, his criminal son Danny Stardust, Danny’s prostitute addict girlfriend Randi, the neo-nazi landlord Greta, social worker and hippie Arne, Syrian terrorist Kefir and his communist partner in crime Igor. All characters are played by one man: Comedian Anders Matthesen aka. ‘The Duck’. In the theme song, Stewart Stardust, Danny Stardust and Arne sing, respectively. Danny’s stanza is sad content in a cheerful form:

”Now, it’s Christmas again, but I don’t give a fuck / my hat is so dirty that it can walk by itself / I owe 1,000 kroner to a guy with a leather vest / my body is as spotted as my criminal record”.

Did you see our Weird Danish Christmas Traditions’ article?

Any suggestions for other classic Danish Christmas singsongs? Write them in the comment field below!