New Year’s Eve is a night of celebration and revelling for much of the globe. Denmark is no exception. But it has its own particular rituals 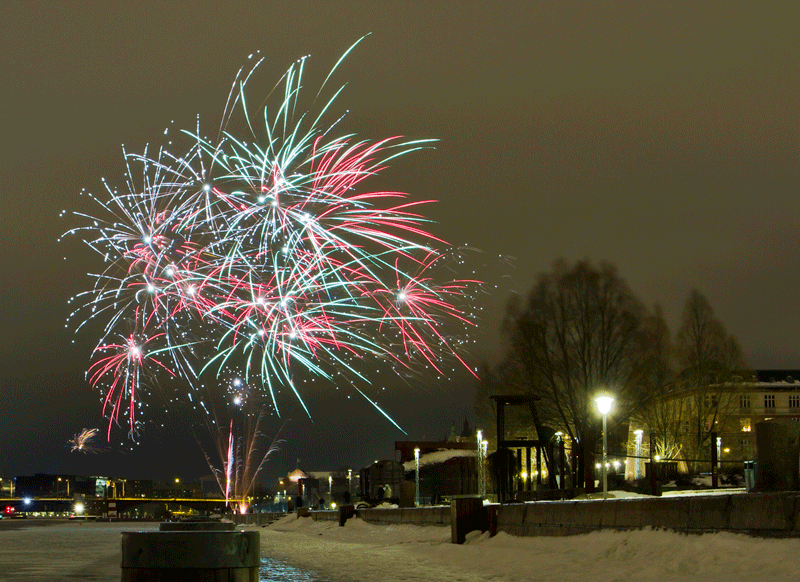 Happy New Year! Danes traditionally celebrate New Year with loads of fireworks, and one of the best places to see it is along the lakes in Copenhagen Image: Frank Schmidt, Flickr CC license
by: Anna Clarke

New Year’s Eve is your chance to say goodbye to 2015, to throw off that novelty Christmas jumper Farmor (granny!) knitted you and don your best suit and tie, ready for a night of revelling. The evening signifies a renewal process; it’s a fresh start, the dawning of a new page in the calendar, so naturally we celebrate this special occasion by doing exactly the same thing we did last year.

In some parts of the world they ring in the New Year with some very choice rituals indeed. In Spain, people mark the occasion by eating a grape every chime of midnight, meanwhile the Irish bang loaves of bread on their doors and walls, and in Turkey, it is customary to wear red undies beneath your party outfit for good luck.

The Danes are no strangers to quaint, some may say bizarre, New Year’s Eve traditions. So we’ve rounded up the best of these annual customs for your amusement. We’ve enlisted a real life Dane and self-proclaimed New Year-ologist, Alex Aagaard, to assist us in giving you an authentic low down on all the night’s happenings.

1. Toast to the motherland

For the majority of Danes, it is Queen Margrethe’s New Year’s Eve speech that signals the beginning of a night of the same old festivities. Starting at 6 pm sharp with a live broadcast from Fredensborg Castle, for many this is the starting pistol which legitimately starts the drinking, and you only have about six hours to wait before the strike of midnight, so hurry!

Her Majesty’s speech has been an annual staple since its advent by King Christian IX back in the 1880s. It has come to symbolise unity for the country, and gained stature during the Nazi occupation of Denmark when the speech came to represent a rallying cry for the country against the occupying German forces. Even today, the queen still takes this opportunity to summarise the year’s major political events, both global and local, and always gives a nod of thanks to the people of Greenland and the Faroe Islands.

In recent times, bookies have started monetising this royal occasion, taking bets on which current events from the past year will make it in to Her Majesty’s speech. In 2011, ‘Justin Bieber’ and ‘happy slapping’ had odds of 50 to 1. Alex, our Dane, thinks the speech is a nice little money-maker.

“If you’re a gambler, the Queen’s speech is a great way to make some easy cash. Last year, I made a quite a bit because I bet that she’d mention Ebola and won!”

This year, our money is on ‘hoverboards’ and ‘Donald Trump’!

Bonus TIP: Don’t be late for the 6 pm Queen’s speech. Danes stand up in respect for the Queen during the speech, and it is awkward to come in say your hellos, when the speech is taking place.

Once Margrethe has given her salute to the nation with the words ‘Gud bevare Danmark’ (God preserve Denmark), it is time for the meal to begin. The New Year’s Eve menu stands in opposition to the calorific Christmas dishes consumed just a few days prior. The traditional New Year’s meal is boiled cod, typically served with home-made mustard sauce and all the trimmings. Not everyone is a fan of the meal however. Alex says that “the end of the year meal just helps to remind me why I start the next one with a big juicy steak!”

The sweet finale comes in the form of a Kransekage

, a towering cake made from layer-upon-layer of marzipan rings. The cake’s turret-like shape is reminiscent of a cornucopia, the horn of plenty, which promises happiness and wealth for the coming year and explains why the desert’s original name was overflødighedshorn – try saying this when drunk!

3. Same procedure as EVERY year James

Just before the final countdown begins, the Danish national broadcaster DR, shows a short film, Dinner For One, known in Denmark as
The 90th Birthday (watch it here).

The ‘comedy’ centres on a New Year’s Eve meal between Miss Sophie, a rich, lonely old spinster, and her loyal butler, James, who acts as a stand in for Miss Sophie’s absent (read: dead) friends, including the amusingly named Mr Winterbottom and Admiral Von Schneider.

This black-and-white German sketch has been aired every single year since 1980 and the Danes love it, like, really love it. The 18-minute-long film has bafflingly managed to embed itself deep into the nation’s heart, demonstrated when in 1985, DR foolishly refused to broadcast the sketch; the decision was met with a large public outcry and thousands of complaints to the network. Alex as a true Danes gets very defensive on this, saying that he loves the annual viewing: ”We ALWAYS watch it! The same procedure as every year: Miss Sophie.”

TIP: If there are Danes at the party, pretend you think the sketch is funny!

As the midnight countdown is rung in on Copenhagen’s Rådhus (city hall), it is tradition for everyone celebrating indoors to switch on the tele and scramble to the highest viewing point (normally this is the sofa) and jump into the new year. Hopefully not twisting your ankle in the process. Although, as Alex muses, “it does help to get any tumbles out of the way, pretty early on in the year!”

The leap from on high is said to symbolise the overcoming of potential challenges and difficulties in the year ahead. It’s followed by an old-fashioned sing-along to ‘Vær Velkommen Herrens År (Welcome to the Lord’s New Year)’ helped by the TV, and by not one, but two, Danish national anthems, ‘Der Er Et Yndigt Land (There Is A Lovely Land)’ and ‘Kong Christian Stod Ved Højen Mast’ (King Christian Stood By the Lofty Mast)’.

Danes are permitted to light fireworks just six days out of the entire year; so come New Year’s Eve, the skies, and the streets, are ablaze with hundreds of rockets and roman candles! For these six days, any health and safety precautions seem to fly out the window with the rest of the fireworks. So much so that Copenhagen’s Rådhuspladsen (the Town Hall Square) can become a war zone to an unsuspecting tourist. In Alex’s words “avoid the square at all costs, it’s mayhem in there”.

Another popular gathering spot for revellers and pyro-enthusiasts is the bridge across the lakes to Nørrebro, Dronning Louise’s Bridge.

TIP: For heavens’ sake, don’t be embarassed about it and put on safety goggles! Most everyone else does!

New Year’s Eve is the perfect night to cement a friendship with your new Danish bestie; come midnight, it is tradition to round up all your broken bits of china and smash it against your friends’ door in a sign of affection and ever lasting friendship!

This is the precise moment that all of your grievances from the past twelve months can physically manifest themselves for the evening. Remember, the bigger the pile, the more people love you; if you’re left clearing up a heap of broken china – take comfort in the knowledge that you’re pretty much Regina George of the crockery world.

Alex also flirted with this tradition one year, although it didn’t end well for him.

“I once threw a cup at my friend’s house…the cup didn’t break – his window did instead!”

For those that aren’t spending their New Year’s Day hungover in bed, watching skiskydning (biathlon) and eating day-old Kransekage, you can tune into the Prime Minister’s speech at 7.15 pm. It is one of the longer-established customs, dating back to 1940 when the then Prime Minister, Thorvald Stauning, gave the very first New Year’s address by radio transmission in light of the Second World War.

Nowadays, the address takes the form of a lengthier discussion, recapping on the year in politics. It is followed by some extensive post-speech analyses by the political pundits on TV. This year, 2015, Lars Løkke Rasmussen will take the stand; he’s only been in office six months this time round, but he has given the address three times before as Prime Minister during a previous term, so he should hopefully know the drill by now.

TIP: If you are interested in politics, now is the time to meet up with Danish friends in front of the TV for a post-New Year low key get together. Test some political arguments, and get rid of some of the left overs from last night’s festivities.

Warning! Leave your expectations at home

New Year’s Eve is a social pressure cooker that we all fall into, year after year, spending months making plans in advance and building up unrealistic expectations for the night.

You might have created a master playlist for the event with that perfect Prince song or have some grand scheme of hooking up with the hottie from class, but you know what they say about the best laid plans…they often go awry. Inevitably, you’ll end up lost in Vanløse at 5 o’clock in the morning, barefooted and carrying a sad looking Netto bag, petting a stray cat with no memory of the last few hours.

So brace yourself for the unavoidable heartache now – it’s never going to be as fun as you think it will be!

Anyway. This rounds off our New Year’s Eve guide to the peculiar traditions of the Danes. If you have any further traditions you would like to share, then let us know in the comment field below,

Skål and Godt Nytår to all!