In Economics class, students correct each others' assignments 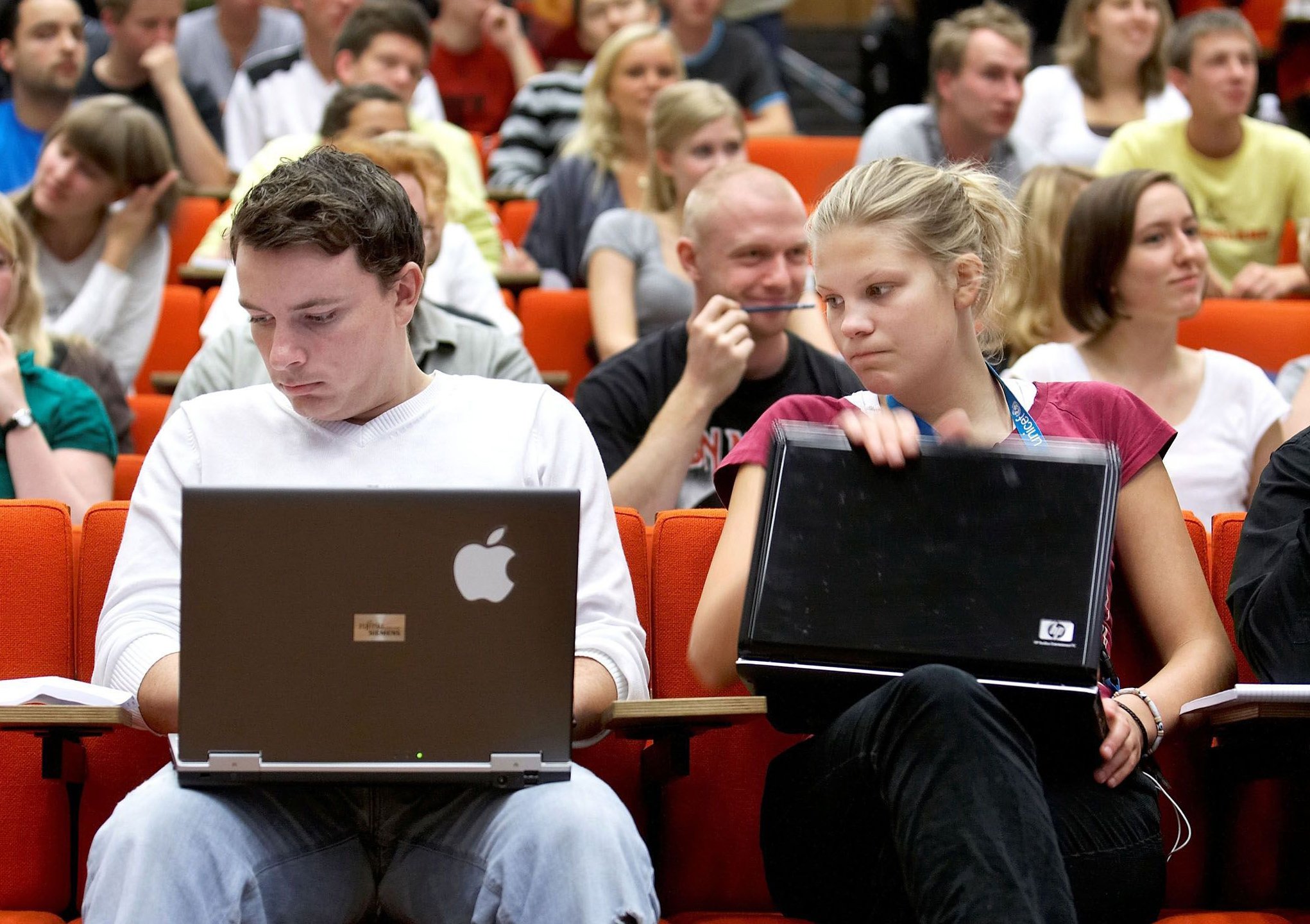 Feedback — Morten Nyboe Tabor, who teaches at the Department of Economics, University of Copenhagen (UCPH), has abolished long lectures and passive lessons in front of a blackboard. Instead he has put discussions, quizzes, and task solving on the syllabus. Not everyone is excited about it.

No more lectures and blackboard teaching. Now it is all discussions, quizzes, and students giving each other feedback on their assignments.

Morten Tabor, who teaches Econometrics at the Department of Economics Department, has been working since 2015 to transform the subject away from a classic teaching structure to a form of teaching that gets students away from Facebook and involved with discussing with each other.

He believes that students in this way learn more, and that they provide better and more effective feedback to each other, and to the instructor.

Only a few could answer correctly

Morten Tabor remembers, in particular, one episode that pushed him towards a change to his teaching methods.

“At a lecture I gave the students a quiz on a subject I had taught the week beforehand. They had all been at the last lecture, so I figured 80-90 per cent of the students would answer correctly, but only 22 per cent did,” he says.

In the past, they did not really get feedback – just grades. I have seen it happen several times that 70 assignments have landed on a teaching assistant’s table, to be corrected before Tuesday. And then the time for feedback disappears.

When Morten Tabor starting teaching Econometrics, the course was built up around two hour-long lectures, where the students sat listening to the instructor – and classroom teaching where a teaching assistant reviewed assignments that the students, in principle, should have done at home.

Morten Tabor says that under one fifth of the students had tried to solve the assignments before class, while less than half had

Give each other feedback

The changes started slowly, but the course was restructured in 2016,  and the exam format changed.

Now the students give each other feedback on their assignments during the course of the year. Each assignment receives feedback from about six other students, but not from teachers or supervisors.

“I do believe that students are qualified to give each other feedback. The process of providing feedback on a topic that you have worked on in-depth is a central part of your own learning process. And this is especially the process that we have in mind, for this is the one where learning takes place,” says Morten Tabor.

Instead of long lectures, the imparting of the curriculum to students, has now in part been moved to online videos that the students watch at home.The physical lectures combine presentations with quizzes and discussions.

The course’s classroom teaching has also been changed. The students no longer have to solve assignments from home, but work on smaller and larger assignments during teaching hours.

The reorganization required time and a lot of resources, but once the structure was changed and the teaching materials compiled, Morten Tabor saw that he, as a teacher, did not need to spend more time preparing teaching than he did before.

Not all students share Morten Tabor’s enthusiasm for the new teaching method.

They include Maria Elisabeth Kjærsgård-Jensen, who followed the Econometrics 2 subject last autumn.

She found that it was not possible for the students to correct each other’s assignments adequately, and that much of the teaching time in the classroom was spent on waiting for a teaching assistant.

If you yourself don’t master the material, it’s really hard to come up with useful feedback. And it’s only a few that master it during a semester.

“If you yourself don’t master the material, it’s really hard to come up with useful feedback. And it’s only a few that master it during a semester. You are in the middle of a learning process. In general, we felt that we needed better feedback that we could use in connection with the final exam,” she says, continuing:

“Unfortunately, in my study group, we got comments like ‘I do not have time to read your assignment’ or ‘see Morten’s slides’, and we just could not use this for anything. My group and I experienced a lot of frustration during the course, due to the framework and especially due to the lack of feedback. We received no feedback from teachers, exclusively by other students.”

Morten Tabor does not recognize the points made by Maria Kjærsgård-Jensen, and says that according to course evaluations, they do not seem to be representative of students. He says that there could easily have been individual cases where there was not enough time to help everyone, and explaining that this is a matter of resources.

During this semester, 250 students are divided into eight exercise classes each with two hours a week. That is, there is more than 31 students per exercise teaching assistant and that this works out to less than half a minute to help each student.

Peer feedback is hard to get used to

Morten Tabor says that the peer feedback the students receive now is very different from the assessment they previously received from teaching assistants. In his view, students will get used to it.

“In the past, they did not really get feedback – just grades. I have seen it happen several times that 70 assignments have landed on a teaching assistant’s table, to be corrected before Tuesday. And then the time for feedback disappears,” he says.

Morten Tabor would like see the number of teaching assistants or classroom hours increased, and he dreams of developing adaptive online learning courses with text, videos and quizzes that adapt to the students’ level and ambition.

At the last meeting of the , Morten Tabor was invited to talk about his work in restructuring the Econometrics course.