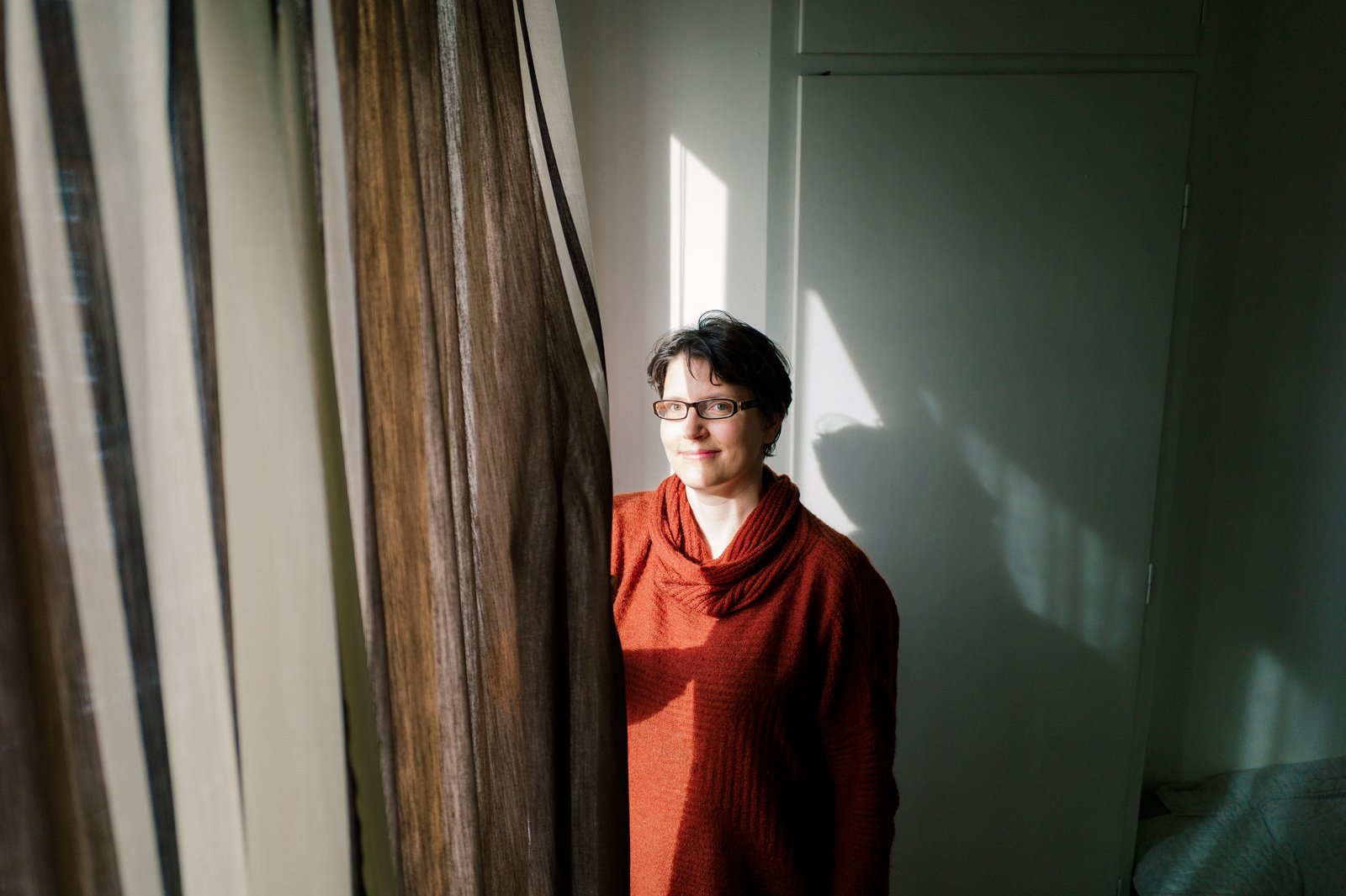 Simone Schopper likes her job at UCPH, but she is shocked by the lack of service shown by the Housing Foundation. Now she is moving to Malmø.
image: Daniel Hjorth

Housing trouble — Swedish/Austrian Simone Schopper pays 9.370 kroner a month in rent for a two-bedroom, 40m2 apartment – no kitchen, with shower – through University of Copenhagen’s Housing Foundation. Far too much, according to the Danish Tenants Organisation who will take up the case with the Housing and Rent Tribunal.

»I’ve lived in some of the biggest and priciest cities in the world and I’ve never experienced anything like this.«

So says Swedish/Austrian Simone Schopper, who is a mass spectrometry analytic at Novo Nordisk Foundation Centre for Protein Research at the University of Copenhagen.

She wrote her ph.d. in Lund, she has been a postdoc at ETH Zürich and a visiting researcher at Stanford, but she chose to go to Copenhagen because the Center for Protein Research has a reputation for having the newest, most modern equipment. In that regard, she has not been let down.

»The Centre and the lab really are among the best in the world,« Simone Schopper says.

In turn, she is shocked by the living conditions, the service and especially the rent prices offered by the university’s Housing Foundation to researchers to try to attract them to Copenhagen under the name Copenhagen Science City – a bid to make Copenhagen the leader in health and science.

There was dust everywhere and the microwave was full of old food stains. The shower is old, the pipes are rusty and the smell is gross and moldy.

She heard that it was expensive and hard to find a place, so her new employer paid UCPH’s Housing Foundation to help her with the hunt for housing.

The Housing Foundation describes itself as an independent foundation, that helps international students and researchers find housing. Though it calls itself independent, the foundation’s website gives the impression it belongs to UCPH. The domain is housingfoundation.ku.dk and the design is the same as the rest of the university’s site.

»I trusted them because my institute paid them to help me and because they project themselves as the university’s official foundation,« Simone Schopper says.

Soon enough it turned out that trusting them was a mistake.

The 40m2 double dorm room at Nordisk Kollegium in Østerbro with an old worn down bathroom, old furniture and no kitchen costs 9.370 kroner a month and of top of that come mandatory fees such as 500 kroner for a moving-in inspection and 250 kroner for paying the rent to the Housing Foundation via bank transfers, which is the only option for someone without a Danish credit card.

Cleaning and two daily meals were supposed to be included, but the cleaning has been almost non-existent even though the former tenant should have been charged with a fee of 440 kroner an hour if the cleaning before move-out was not done satisfactorily.

»There were old shoes, socks and plastic bags lying around and the carpet was so dirty, that I ended up buying a new one. There was dust everywhere and the microwave was full of old food stains. The shower is old, the pipes are rusty and the smell is gross and moldy. Even though I have complained several times, it has not been cleaned and the cleaning lady says, that I have to do it myself, because she only has ten minutes,« Simone Schopper says.

Frustrated, Simone Schopper decided to investigate the cost of getting a cleaning company to do a full service, but it would run up to somewhere between 6.000 and 9.000 kroner.

»The state of the place was something I have never seen before and I have lived many places around the world,« she says.

On the Foundation’s website it reads that the apartment in the dorm »is a good option for the (…) mature guest (…) who appreciates a high level of service which means having the room cleaned but also lack of cooking facilities in the apartment since 3 meals a day is included in the rent.« The description is accompanied by a gallery of inviting photos. 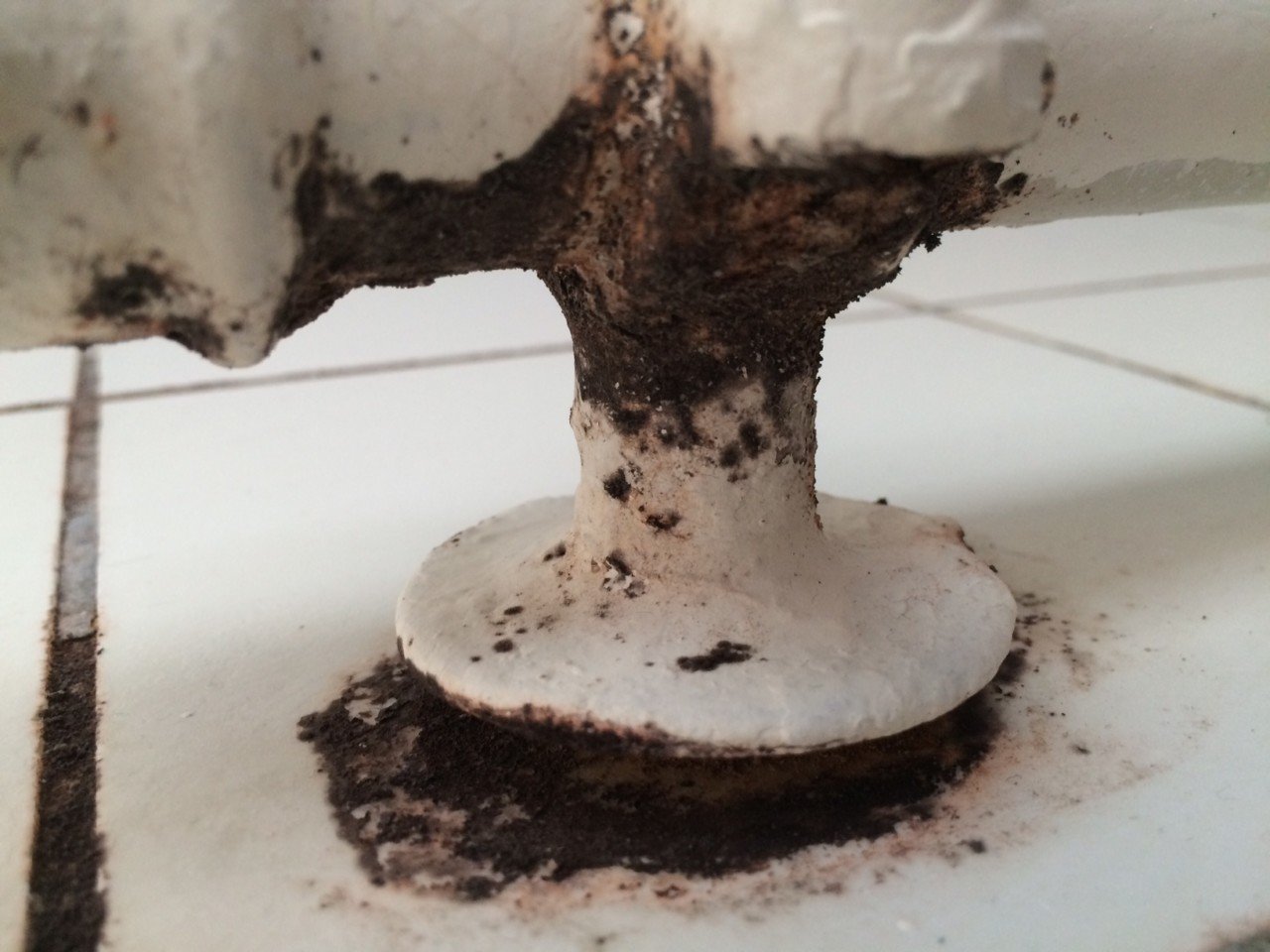 According to housingfoundation.ku.dk the rooms in Nordisk Kollegium are »suited for the mature guest«. Simone Schopper documented the conditions when she moved in.
image: Simone Schopper 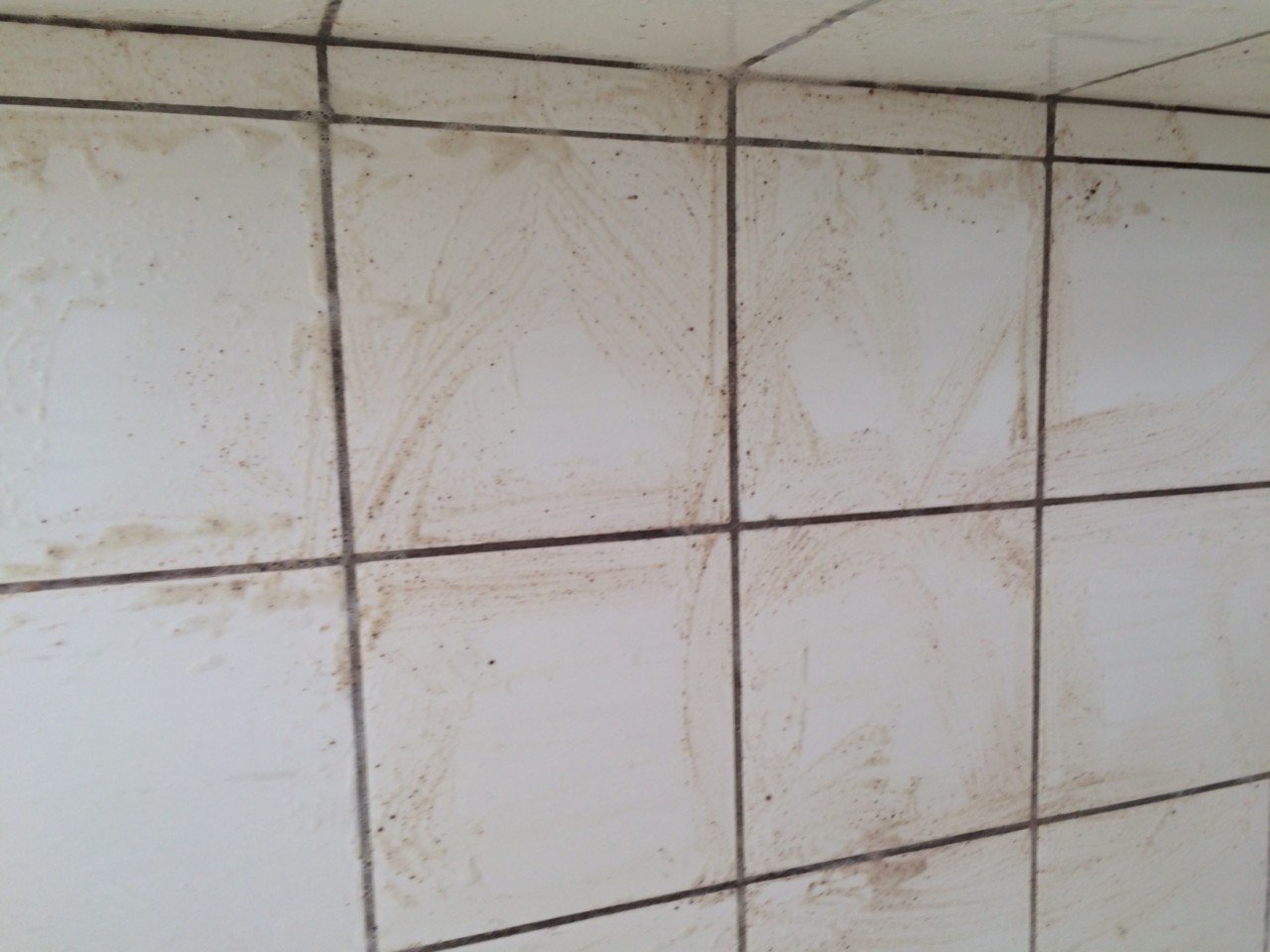 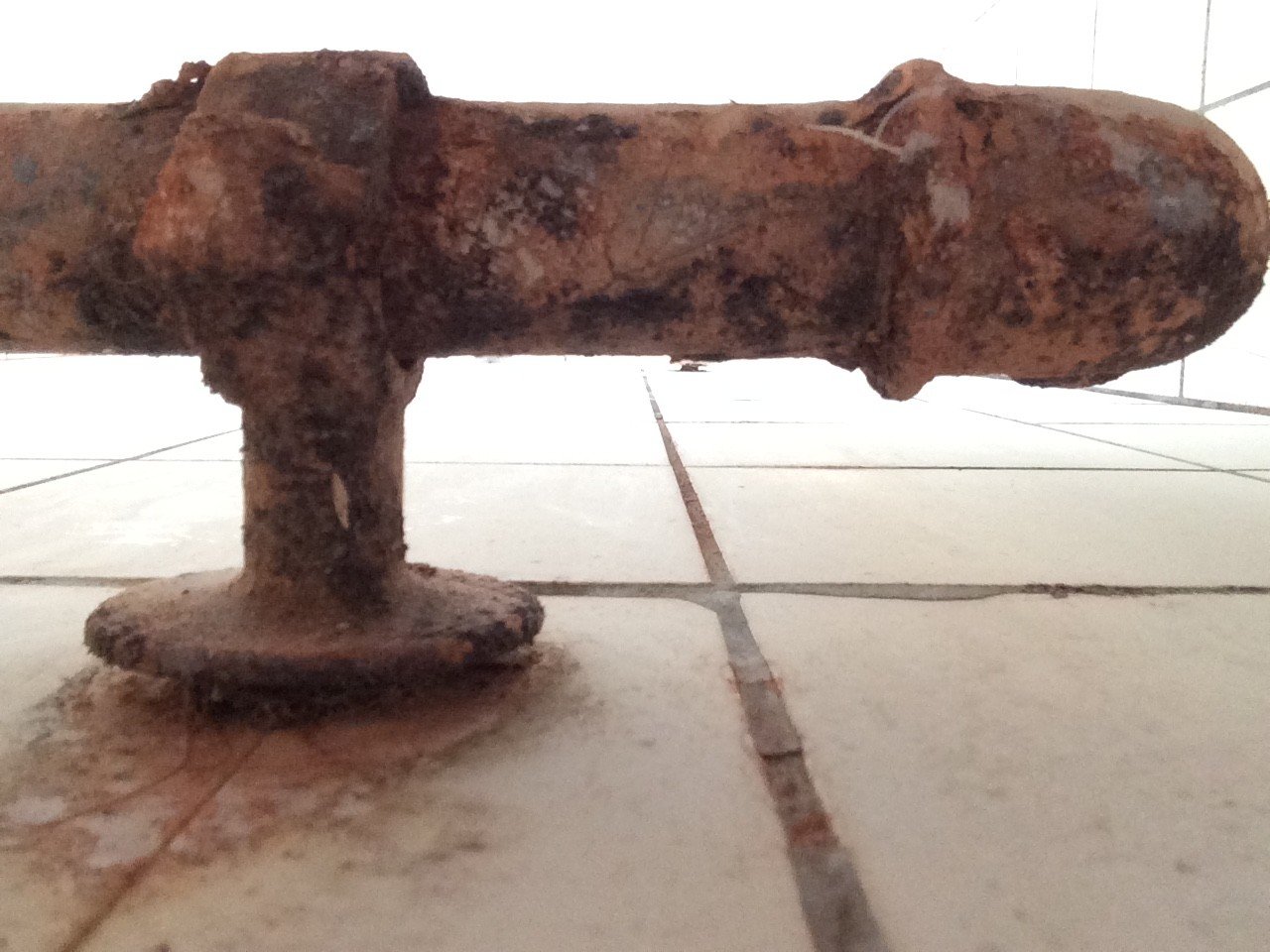 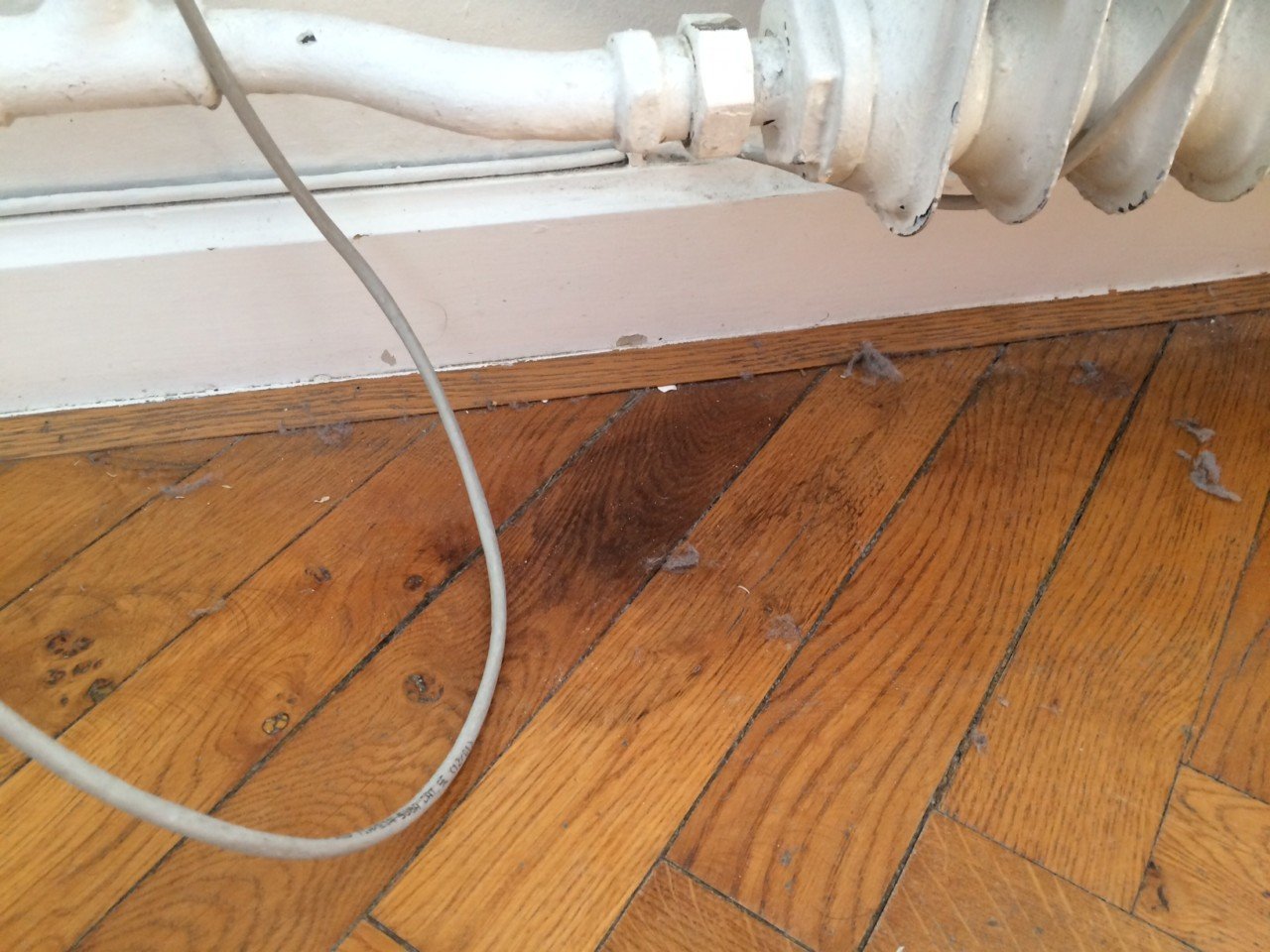 After complaining multiple times to the Housing Foundation, Simone Schopper finally got a reply from one of their employees:

»I can see what you mean by the pipes in the bathroom being rusty and that the paint is falling off the cupboard, but this has to do with the fact that it is an old building and an old apartment. It might be true that the apartment generally could use a renovation, but unfortunately, there are currently no plans for that. The rent reflects the state of the apartment. 9.370 kroner a month with two meals included in inner Østerbro is remarkably lower than the market price. You are welcome to do the maintenance yourself, for example removing the paint that is coming off and removing the old screws, but it is not something the dorm will take care of,« the e-mail-reply reads.

Regarding the two meals a day, it also turned out the Housing Foundation had promised more than they could deliver.

The kitchen has been closed for a month during the summer and in other holiday periods and as a vegetarian, there is only salad and bread on the dinner menu five days a week. As it is part of the rent, the meal service cannot be cancelled and Simone Schopper does not understand why she has to pay when the kitchen is closed for holidays.

She stresses, that she is usually flexible and know how to clean herself, but that she had to start work right after her arrival in Copenhagen and knew that she would be very busy and have to travel a lot. For that reason, she decided to pay the high rent for the extra service so she would not have to worry about cooking and cleaning while she started her new life here.

»Several of my colleagues who live in Østerbro themselves said that it was expensive, but I thought it was alright if the food, the cleaning and the general level of service was okay. It is the combination of a high price and extremely poor service that makes me feel cheated,« she says.

It is far from the first time UCPH’s Housing Foundation is in the spotlight for disappointing tenants, but in the past it has been students who have felt mistreated.

In 2016, 60 international students were kicked out of their apartments prematurely, in spite of some them having contracts that stretched far into 2017, because the foundation had missed the fact that the apartments were no longer under their right of disposal. In 2015 the University Post uncovered how students were charged thousands of kroner for cleaning in areas they had not lived in.

In another case, three students claimed that the Housing Foundation had not informed them, that instead of living alone, they would be sharing a one-bedroom apartment in Østerbro with a rent total of over 9.000 kroner.

Also, in 2015 the University Post uncovered that the Housing Foundation housed students in a dorm on Krimsvej in Amager, before the building was finished. The students received two months of rent in compensation, but they still had to live at a construction site with construction workers coming in and out of their rooms. The foundation also routinely charged the tenants with large fees for transferring their own money back to them via bank transfers.

In Simone Schopper’ case, legal director in LLO Jakob Møldrup-Lakjer claims that the Housing Foundation are breaking  the Rent Act and that they are setting their rent far above what is legal.

The Rent Act is complicated, but the main rule is that if a building has been put to use before 1991, there is an upper limit to how high the rent can be. It depends on factors such as the size of the residence, location and whether the kitchen, shower and windows are modernized or not.

Since Nordisk Kollegium was inaugurated in 1942, the landlord can collect rent based on the cost of running the building plus add-ons for maintanence, yield and improvements.

As a rule of thumb, the landlord cannot take more than 500 to 700 kroner per square meter per year, if the apartment is not modernized with an entirely new kitchen and shower.

Within the amount is an extra fee for furniture, food and cleaning, but it is not enough to explain the price difference and serving food does not exempt the residence from the Rent Act, according to Jakob Møldrup-Lakjer.

»We have had cases with compulsory food services before for example at retirement homes and flatshares. We are now taking up Simone Schopper’s case with the Housing and Rent Tribunal and then we’ll see what expenses for running the building the Housing Foundation can document. I am looking forward to a settlement, as there is so much disorder within the Housing Foundation,« Jakob Møldrup-Lakjer says.

Simone Schopper’s lease runs out on May 31 and she is not going to miss the apartment or UCPH’s Housing Foundation. In fact, the foundation are forcing her out of the residence five days prior to the end of the month, in spite of it usually being four days, because it is a Saturday where the office is closed. She is still required to pay rent for the whole month, she says while shaking her head.

She has just bought a new apartment with a balcony in Malmø and will commute back and forth from the job in Copenhagen.

»It’s going to cost me about 5.000 Swedish kroner a month for rent and transit, so it’s much cheaper,« she says.

The University Post has tried to get a comment from UCPH’s Housing Foundation with no luck. The foundation has not had a director since Jannie Sonne took the job on February 1 and quit two months later. The Foundation’s staff refer to chairman Erik Bisgaard Madsen, Associate dean for Trade and Government Collaboration at UCPH’s Faculty of Science, but he has not responded via email nor phone.