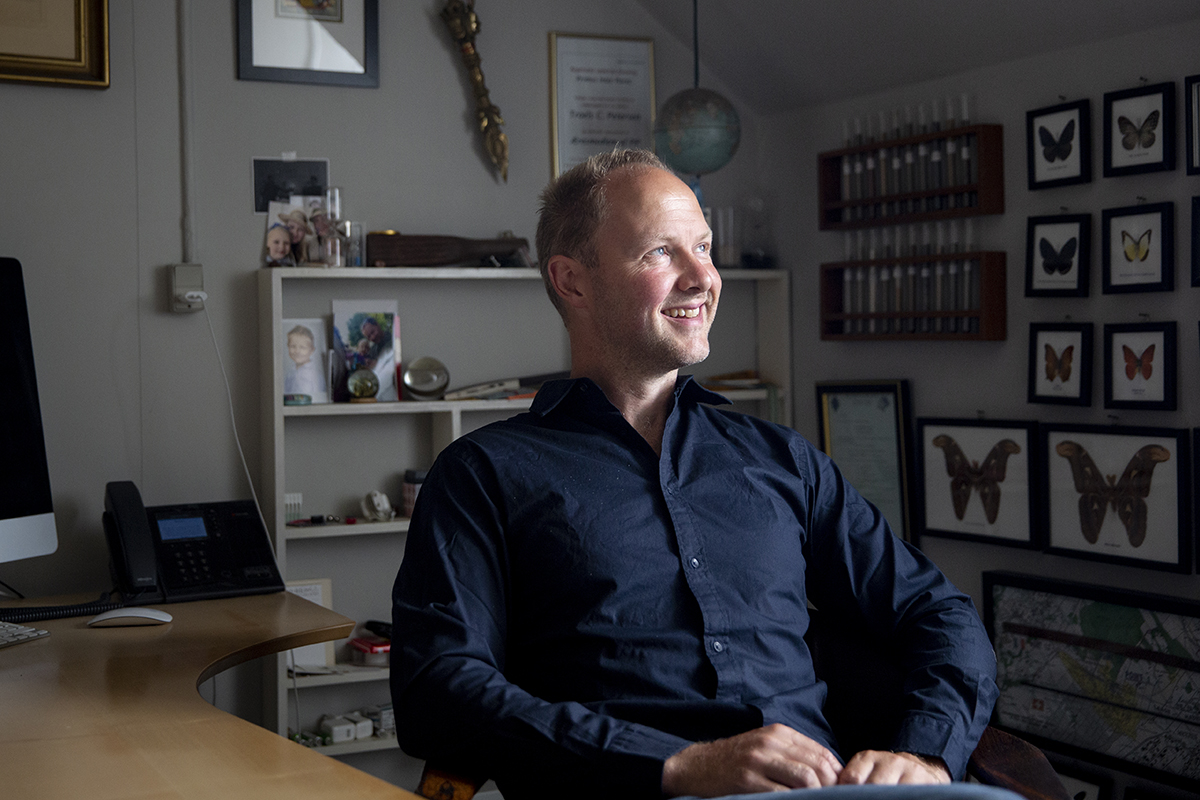 Teaching Award — In only a few years, Troels C. Petersen's course in statistics at the Niels Bohr Institute has become the most popular on North Campus. His dedication and teaching-style attracts students from throughout the university, and he has now been elected Lecturer of the Year at the Faculty of Science.

Up on the wall behind associate professor Troels Christian Petersen’s desk at the Niels Bohr Institute are 20 butterflies, mounted behind glass frames. Behind each of the frames is a five-line poem, a limerick, which the Faculty of Science’s teacher of the year 2021 has authored for all the master’s and PhD students who he has supervised when they finish their studies.

They get a butterfly when they have ‘earned their wings’.

»They get a butterfly when they have ‘earned their wings’, and I also keep one for myself. I think it’s a nice way to remember the students who you have actually spent a lot of time with. I can clearly remember them, and I also keep a tab on what they do afterwards. The list of former students who get important jobs solving some of the world’s major challenges gets longer year by year. And this gives me the feeling the department and me are doing something right,« says Associate Professor Troels C. Petersen.

The butterflies are a poetic illustration of the enthusiasm, and the dedication that the 46-year-old particle physicist has for his students. He has now been awarded the Lecturer of the Year prize at the Faculty of Science, University of Copenhagen (UCPH). 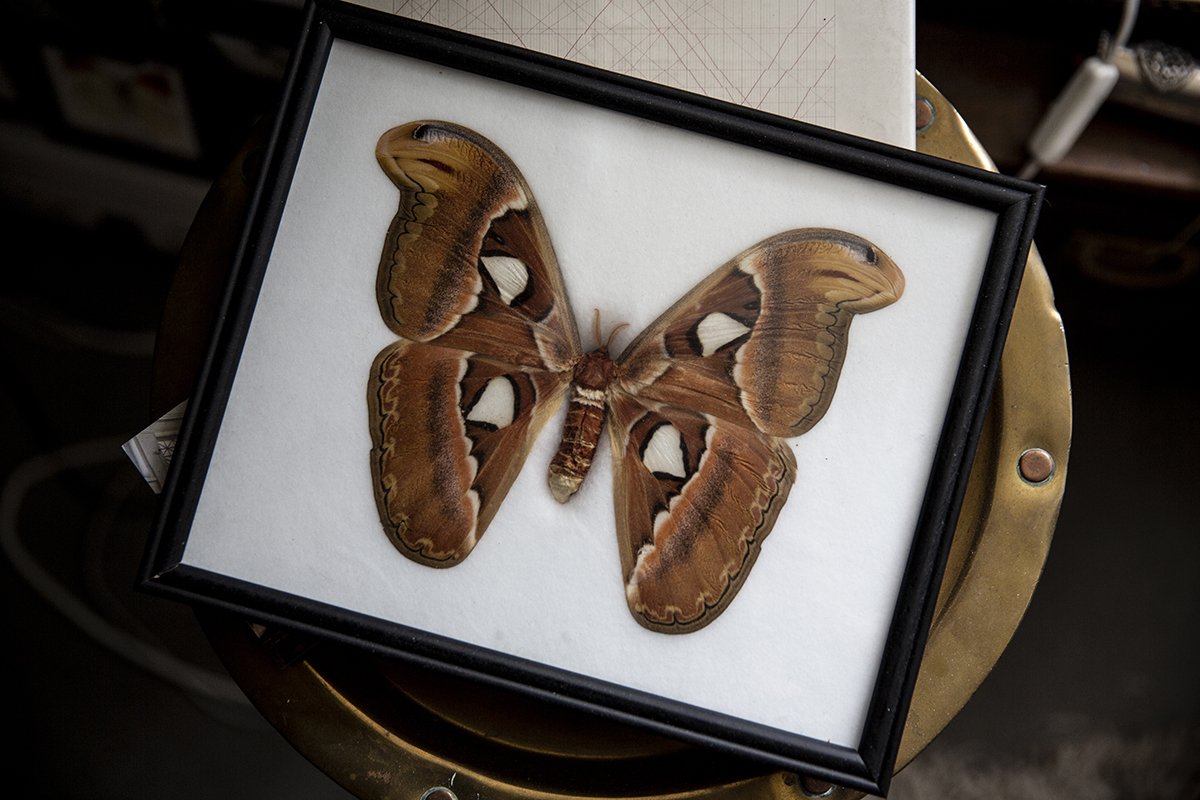 There are both large and smaller butterflies on the office wall. The big ones Troels C. Petersen give to his PhD students.
image: Emilie Thejll-Madsen

The most popular course on campus

Troels C. Petersen’s eye for good teaching began when he spent a year at the University of California, Berkeley.

»At Berkeley, I found out that my physics degree programme from Denmark was good. But one day, my supervisor asked me about some incredibly simple statistics. And when I ended up spending an hour finding a solution that should have taken five minutes, I also discovered the gaps in my study programme. This was an eye-opener,« remembers Troels C. Petersen.

LECTURER OF THE YEAR AWARD

Troels C. Petersen gets DKK 50,000 for further development of his teaching and DKK 25,000 as a personal award, which was presented to him at a reception at the Niels Bohr Institute.

After several years as a researcher abroad, Troels returned and resumed the course in 2009. Now there are 168 students registered, making it the most popular course on North Campus.

»I’m surprised that the interest continues to grow, and this has led to all sorts of problems with room space and exercise tutors, but I don’t want to put a limit on the enrolments. In the years I was out in the wider world, I have never been refused admittance to a course anywhere, and I appreciate that. I promised myself to remember this if I ever had to teach myself,« says Troels C. Petersen.

What do the students use the course for, and what is it you all do to make it so popular?

»When you talk about science, it is crucial to be able to understand data. Statistics is here a basic tool that helps you reach conclusions and say whether you have actually discovered something new in your experiment, or whether it was just a coincidence,« he says and continues:

»We therefore do a lot of calculations and exercises. A simple, very illustrative, exercise we do is about determining the length of the desk in Niels Bohr’s famous Auditorium A. Each student does a measurement, first with a 30 cm ruler, then with a two-metre-long pocket rule. Then we do a data analysis on everyone’s data to determine the length as accurately as possible. No one does not understand the exercise. But the many steps from the raw data up to, and including, a well-argued result, are longer than you think. There are missing measurements, errors, shifts, rounding-down and various uncertainties that come into play. Many of them say that this exercise taught them a lot. And it demonstrates why programming is an important part of analysing data.« 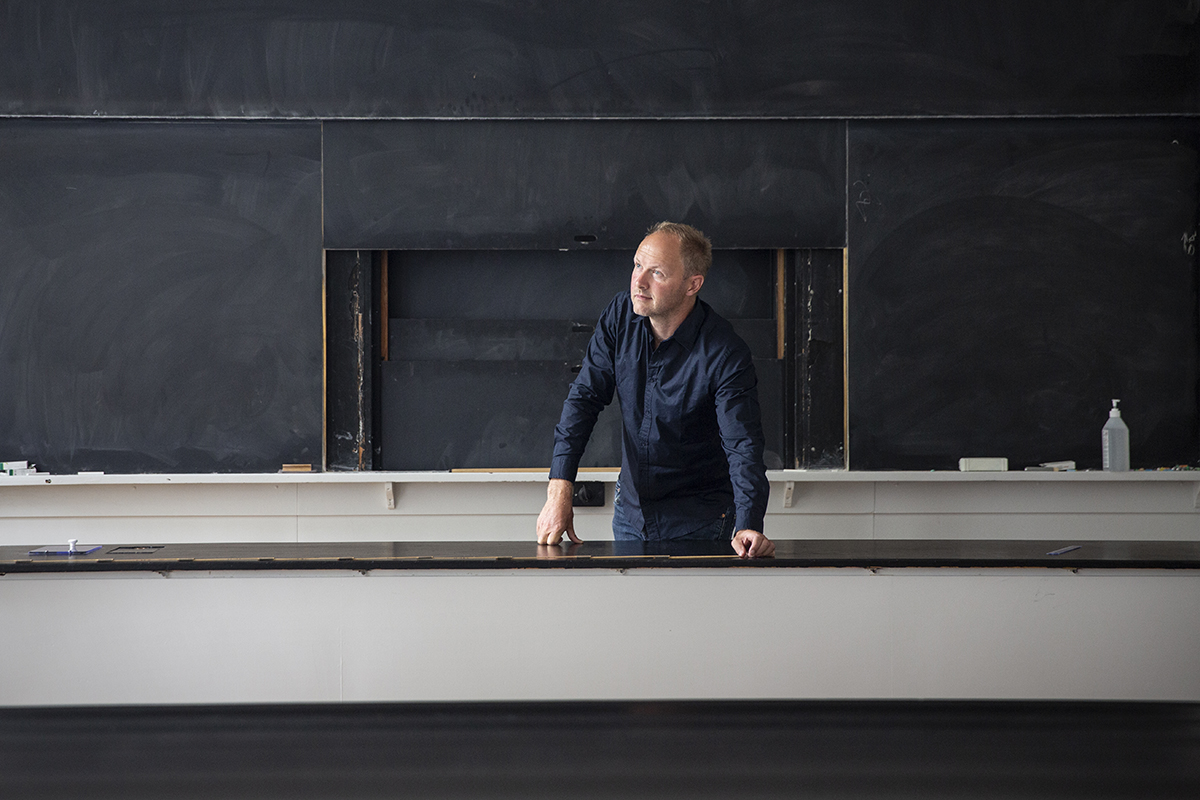 Troels C. Petersen in front of the desk with his pocket ruler in auditorium A.
image: Emilie Thejll-Madsen

The lecturer of the year also runs another, more recently started, course in machine learning, which is also enjoying considerable popularity among students. Just like the statistics, he spotted a new theme that should not be reserved for data scientists in the digitised landscape of the future.

When he is not teaching, Troels C. Petersen does research in experimental particle physics, that is, the exploration of the fundamental matter of the universe. Back in 2012, he and his colleagues helped to discover the famous Higgs particle in the ATLAS experiment — something that led to big headlines throughout the world. The research is still important to him, both in the exploration of the Higgs mechanism, and in the use of machine learning in physics in general.

At Niels Bohr did your research start
You were hard-working, well-liked and smart
From Paris to Berlin
Ph.D. offers came in
And even Karl Jakobs hat to yield to your heart.

(The first butterfly to Sascha Mehlhase in 2007, who chose the direction for his PhD among several offers (including the ATLAS spokesman Karl Jakobs))

Helle is both hard-working and meticulous
Her ambition for efficiency is unambiguous
On Machine Learning based
after bosons she chased
And the job market’s want for her was ridiculous.

Benjamin gave atmosphere from the start
With SHAP values he created his chart
And starting from protons
then isolating photons
your samples became as pure as your heart.

What do you think of the researchers who see their teaching as something secondary and less important?

»You need to acknowledge that teaching is not just something you can easily skip. It is an important task that is potentially very important for the development of all our young talents. However, I think there is a positive trend happening. We used to only employ people based on their research. Now we are also interested in their teaching,« says Troels C. Petersen.

Have you had really good, or bad, teachers that have inspired you?

»I have had some very different types of lecturers. At both ends of the spectrum. I had one instructor that the news media had written about when he came back to Denmark, and where I really prepared and read up on the course in advance. It turned out, however, that the person had not prepared for the teaching at all, and it was a disaster. I was really disappointed, but then you are one experience the richer,« he says..

12 years without one missed lecture

Perhaps this experience played a part in Troels C. Petersen’s own work as a teacher. In any case, he is not the unprepared type. He has not missed a single lecture in 12 years, or had any equipment breaking down.

During the Covid-19 lockdown, where he did his teaching on Zoom, his thorough preparation, and a good portion of energetic charisma, helped deal with the new situation.

»I have often been told that I am very enthusiastic about my course, and that this helped reach the students through the screen on Zoom. At the same time, I was happy that it was not the first time that I did the course, because it all required a lot more from me,« he says.

READ ALSO: When Nicole Schmitt has to explain how cancer cells mutate, she whips out Darth Vader 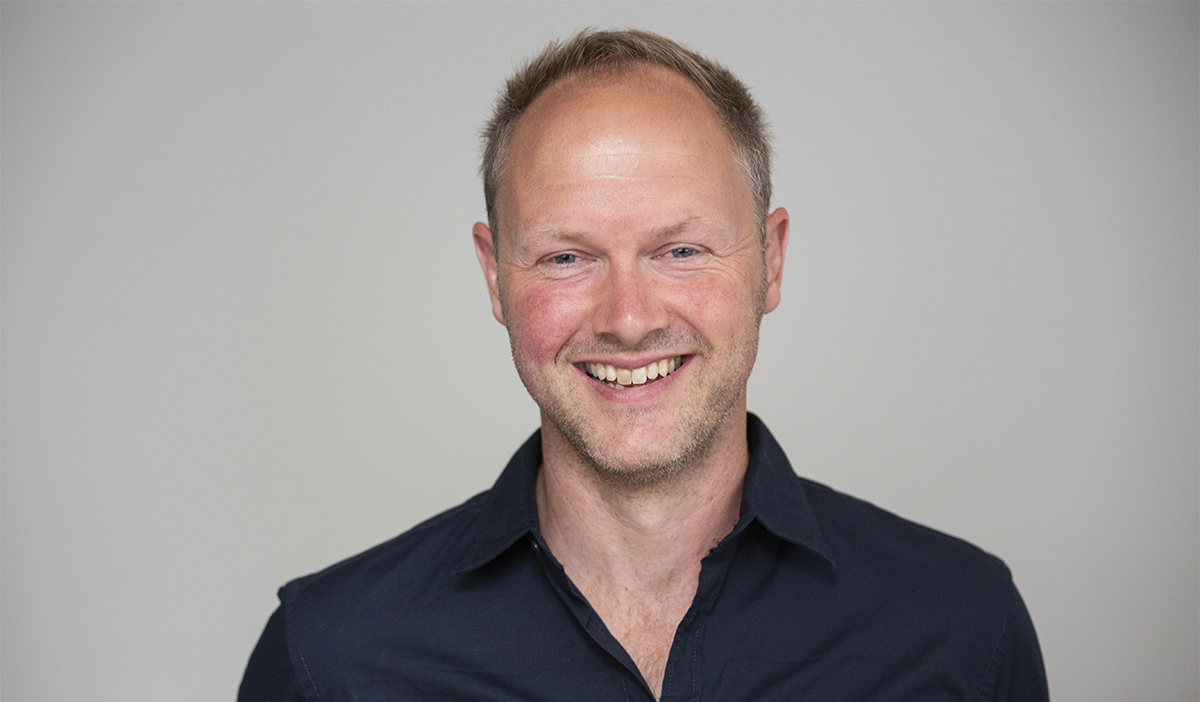 »I just thought physics was cool back then when I started my studies. But today there are many who are motivated by wanting to solve problems, and for this, physics is an incredibly good tool,« says Troels C. Petersen when he is asked to describe his students.
image: Emilie Thejll-Madsen

Have you ever experienced that something really went wrong in your teaching?

»I have missed a Zoom link or two, but luckily nothing serious. But I do get regular feedback from my students, and here there is both praise and criticism. I brought in some data from the Covid-19 epidemic to the exam on the statistics course because throughout the epidemic we have seen a lot of statistics. However, there were three students who responded in the evaluation that they thought it was a shame to do exam assignments on something as sad as corona. And when two students write it, there are probably more who have felt the same way, but who did not say it. So this will not happen again,« says Troels C. Petersen, who is also part of the Danish State Serum Institute’s expert group on Covid-19 modelling.

It is one of the greatest privileges to be able to stand in front of 100 young talents who want to learn what you are teaching.

What do you think about the students today compared to your own generation?

»Young people have become less idealistic about physics, and more idealistic about solving the world’s challenges. I just thought physics was cool back then when I started my studies. Now many people are motivated by wanting to solve problems, and physics is an incredibly good tool for this,« he says, adding:

»The vast majority of the students are super cool. They show up with a strong desire to learn and enthusiasm. It is one of the greatest privileges to be able to stand in front of 100 young talents who want to learn what you are teaching. It’s the closest thing you will ever get to becoming an academic rock star.«