When Nicole Schmitt explains how cancer cells mutate, she whips out Darth Vader

Lecturer of the year — When Nicole Schmitt does her cell biology teaching, it has Pulp Fiction and soccer matches on the list of references. And if it helps students to learn, she does silly things. This is why she has been selected teacher of the year 2020.

In a scene in the cult film Pulp Fiction, Uma Thurman has taken a overdose of heroin. While she is lying unconscious on the floor, John Travolta takes a gigantic needle and stabs it directly into her heart. It works. She comes back to life.

You need to know this scene if you are a student in one of Nicole Schmitt’s classes.

Because when Nicole Schmitt teaches cell biology, she uses references to things like both Star Wars, Pulp Fiction and soccer. On rare occasion, she will even do a little jig.

But she does not use any of these communication antics to gain popular teacher status. She does it to impart as much knowledge as possible to her students about ion channels, cell biology and the body’s functions. And to have them want to go home to read more.

But that part of her project has failed. That part of it, that is, of her being the most popular teacher. She has been selected teacher of the year 2020.

Nicole Schmitt appears on the screen. She sits in her office in the Maersk Tower at Panum, her only company the small, cape-clad Darth Vader figure on the bookcase behind her.

WHO IS NICOLE SCHMITT?

Nicole Schmitt is from Germany and moved to Denmark 18 years ago.

She is a professor and teaches medical students in things like cell biology.

She does research in the so-called ion channels and is deputy head of department for education at the Department of Biomedical Sciences.

Last November, she was awarded the Teaching Award 2020, also called the ‘Harald’, after a recommendation from one of her students. According to the nomination, Nicole Schmitt constantly renews the teaching and continues to explain the difficult material until she is sure that the students have understood it.

»She is able to explain difficult topics in a way that makes them seem easily understood. In addition, with her buoyant personality, she has a flair for the teaching that makes it more exciting and accessible to students. She explains things in a way we understand, and makes up analogies that we remember,« the nomination states.

Receiving the award means a great deal to her, she says.

»I was actually also nominated last year, so this is two years in a row – yes! But I got it this year, and I think that’s really, really great. Because there are some students who found that my teaching actually means something for them. They actually sat down and wrote this recommendation. It does not write itself,« she says in accented Danish.

Orchestra of the heart

Nicole Schmitt is German, but moved to Copenhagen in 2002 when she got a postdoc.

»I had a two year contract, but got stuck here. And then 18 years just passed.«

She does research into something called ion channels. I decide to let her explain:

»They are actually what make your heart beat, because they allow current in the form of ions to penetrate in and out of the cells in your heart. Ions cannot just go through a cell membrane, because it is a layer of fat. So there are these small ion channels through the membrane, which allow the passage of a whole orchestra of current. It is this huge orchestra that is playing, when your heart beats at 70 beats a minute,« says Nicole Schmitt, giving us at the same time a taste of her creative explanatory skills. 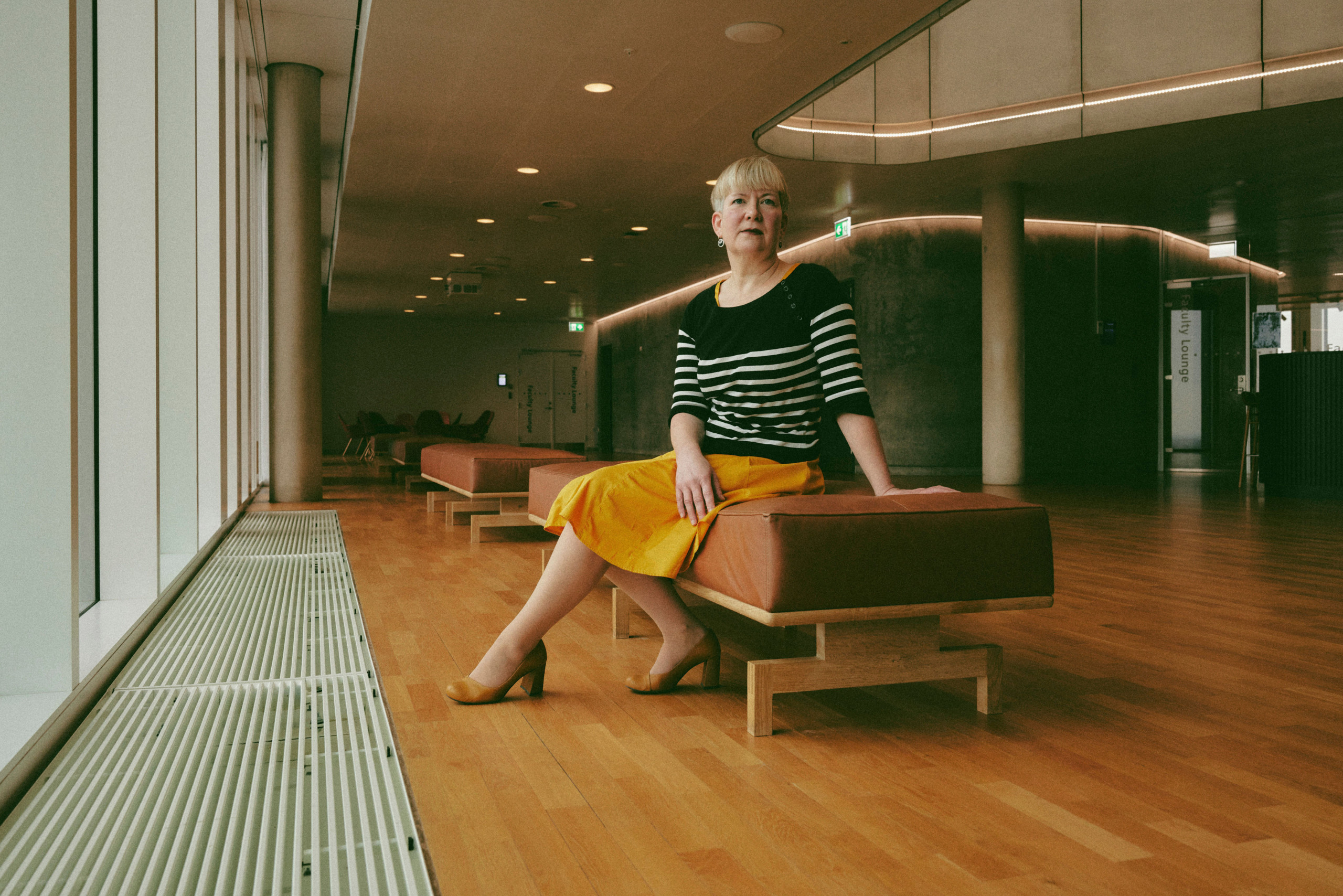 Nicole Schmitt looks out over the city from the Maersk Tower at Panum, where she has an office.
image: Foto: Jonas Pryner Andersen.

The queen of metaphor

In the recommendation letter, the students emphasise that she uses fun analogies and metaphors to make it easier to remember the intricate functions in the body.

This brings us back to that scene from the Tarantino classic — Pulp Fiction. The needle in John Travolta’s hand is filled with adrenaline, so Nicole Schmitt uses it to explain the effect that adrenaline has on the heart.

»If they haven’t seen Pulp Fiction, I’ll send them home to see it. It’s shocking to have students who haven’t seen a classic like that. I can also see that there are a number of students who have not mastered their culture canon and have not seen Star Wars. This is totally shocking,« she says with caricatured indignation.

When Star Wars is put on students’ cultural syllabus, it is because there are clear parallels between the science fiction films and cancer mutations.

»There are some proteins in the body that function normally. But when they mutate, they suddenly switch over to evil proteins and create cancer. I use images from Star Wars because we have a character here who was once good and then turned evil,« says Nicole Schmitt with reference to the small cape-clad figure behind her.

»I can also explain what happens in a normal cell and in a cancer cell by using the analogy of a soccer match between Real Madrid and FC Barcelona,« she says before laughing.

»No, I’m not going to reveal all my secrets now.«

READ ALSO:  Taking a class with the best – portrait of lecturer of the year 2019

As she sits there behind her screen, Nicole Schmitt misses her students. She certainly misses seeing them in the flesh rather than through small screens on Zoom.

It has almost become my primary mission to break down their fear of failing.

»It has been difficult not to sense the presence of the students. It has been very rewarding for me to be with them. The best for me is when I can see in a student’s face that they suddenly comprehend something. The light bulb moment. You do not get this on a screen.«

But the students will probably get these aha moments anyway. In the recommendation, they write, at least, that Nicole Schmitt’s teaching is just as good on Zoom as in real life. This is perhaps because she has been able to transfer some of the blended learning methods that she already uses in her teaching to her online teaching.

She uses, for example, a ‘backchannel’ function, where students can ask questions anonymously, which she can then answer. It works well when teaching is digital, but it also works well during lectures, her experience shows.

»This is one of the ways in which I try to create a safe learning space. Many students are afraid to ask questions,« she says.

The most important, stupid, questions

Nicole Schmitt usually teaches first-year students, and she can see a clear trend of students bringing their zero-defects culture with them from their upper-secondary school period.

»They turn up here with these high grades and have managed to gain entrance to the study programme of their dreams, and it has almost become my primary mission to break down their fear of failing,« she says.

Because the fear of failure can often stop you from learning new things. You have to somehow put yourself at risk in order to learn something new. And it is often the students who pose the most questions that perform the best, according to Nicole Schmitt.

»To quote Yoda, ‘The greatest teacher, failure is.’ It is through mistakes and so-called stupid questions that we learn the most,« she says.

»I insist on a safe learning space. I repeat to them every single lesson that I ‘know my shit’, and I would really like to explain everything they would like to have explained. But they have to ask the questions.«

She knows how to make mistakes, because this is what happens when you move to a new country and need to to learn a new language.

»I use it as an icebreaker that Danish is not my mother tongue. I can tell them that they can hear that I am not from Denmark. But I still know what I’m talking about. There may be some grammatical errors, but I can explain complicated cell biology without any major problems. So you can be challenged and still be knowledgeable,« she says. 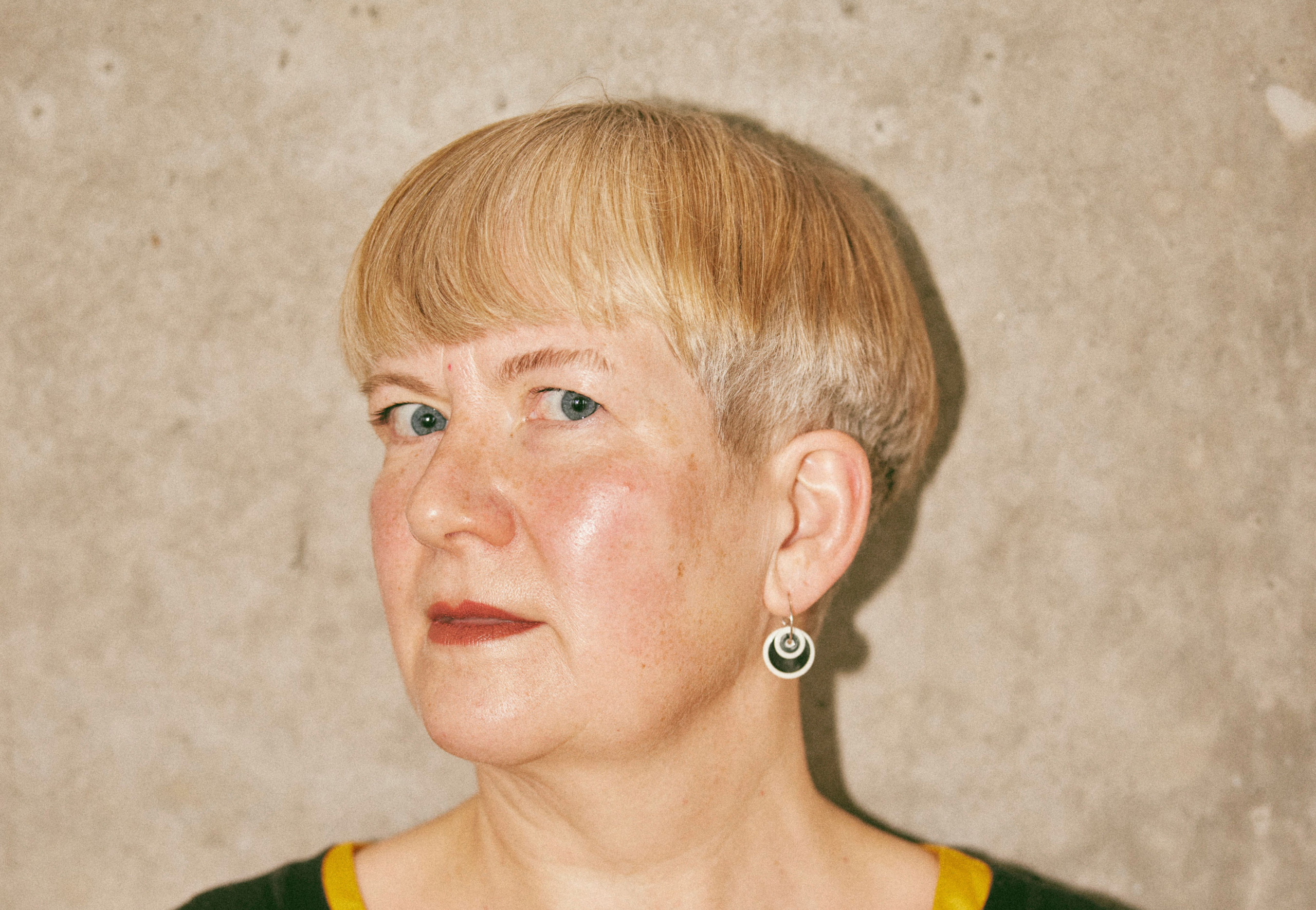 Nicole Schmitt is happy to make fun of her own German accent if it makes her students dare to ask questions in the classroom.
image: Foto: Jonas Pryner Andersen

Nicole Schmitt is generally not afraid to look silly. Whatever is required to teach the students what they need to learn.

»There are, for example, substances called lipids, where I do a legendary lipid jig. If they can remember it from this crazy woman who danced, fair enough. Whatever works to get them to remember and reflect on what it is they learned. This is the most important thing,« she says.

She does not dance, do quizzes and refer to films for fun.

»It’s not about pleasing or about entertaining. If I can make sure they take on a responsibility for their own learning, and find that what I have told them sounds exciting and makes them want to read more, then I have achieved what I want to do.«

Nicole Schmitt is not the type of teacher who has chocolate-covered cream cakes with her, or rushes out with her class for a game of rounders on the lawn if the sun is shining, she says.

The students are not aware of how much they mean to me.

»It’s not about bringing sweets to class once in a while. You don’t have to be the most beloved teacher. You have to be the one who pushes them and motivates them to take responsibility for their own learning. I can’t open their heads, pour knowledge into them and shut them again,« she says with a hunch of her shoulders.

Before the interview ends, there is something that Nicole Schmitt would like to say. She calls on all students at the University of Copenhagen.

Because even though she really likes the prize and the students’ appreciation of her teaching, it all seems a bit arbitrary.

»I have a lot of colleagues who I know do top-notch teaching, but who were not lucky enough to have a student sit down and made the effort to write a recommendation,« she says.

In addition to being a teacher and a researcher, she is also the deputy head of department for teaching at the Department of Biomedical Sciences, so good teaching is something that is on her mind in general. But it is difficult to ensure that there is good teaching for the students, if management does not know what kind of teaching it is that they appreciate.

»The students are not aware of how much they mean. They would like good teaching, but we see relatively low response rates on the evaluations. And often you will only be mentioned if the students don’t like you,« she says.

If the students highlight the instructors they find are doing well, and explain why, then the other instructors can learn something from them. And be more motivated, according to Nicole Schmitt. 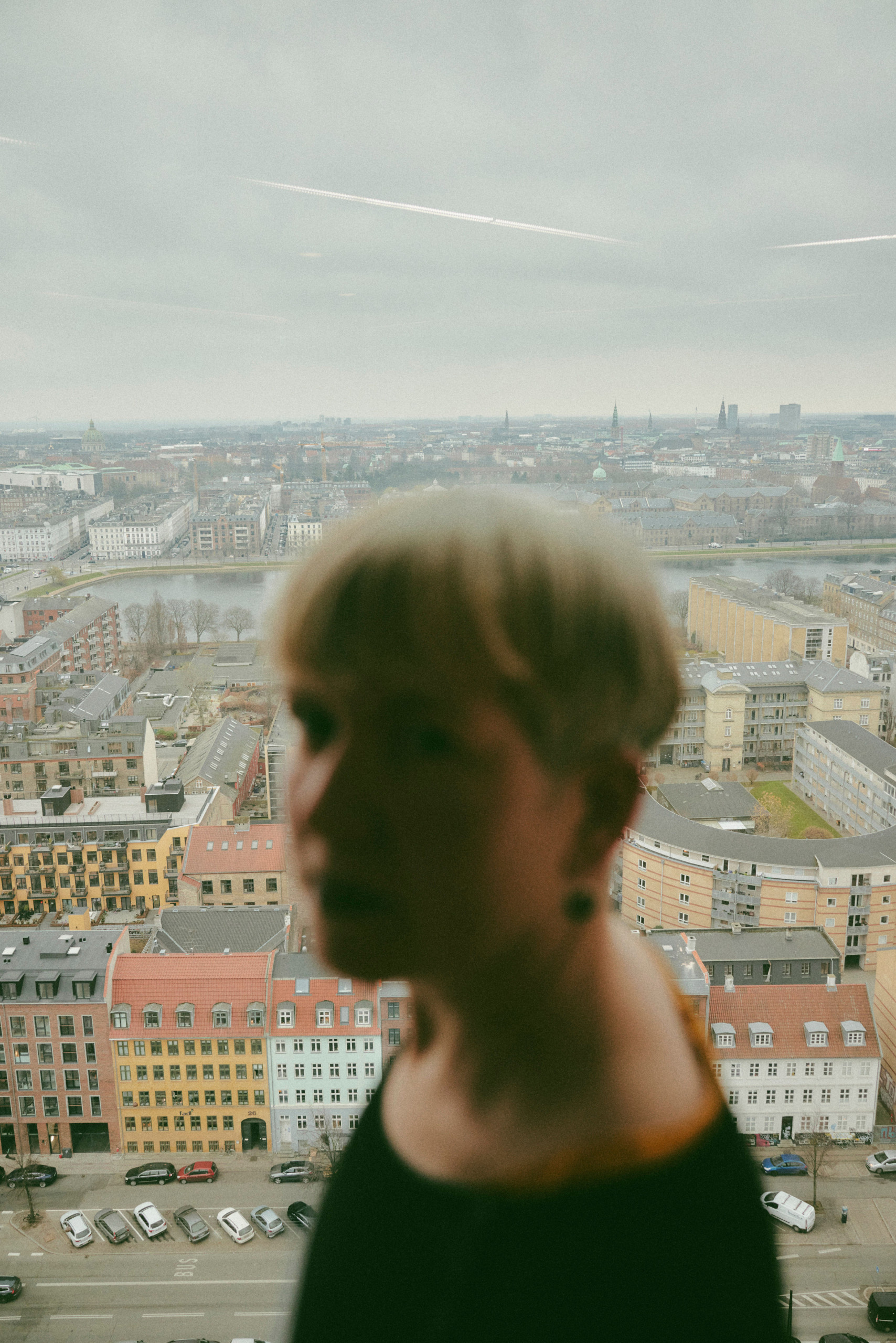 »If we want good teaching practices on the agenda, then we must do this together«.
image: Foto: Jonas Pryner Andersen
Newsletter