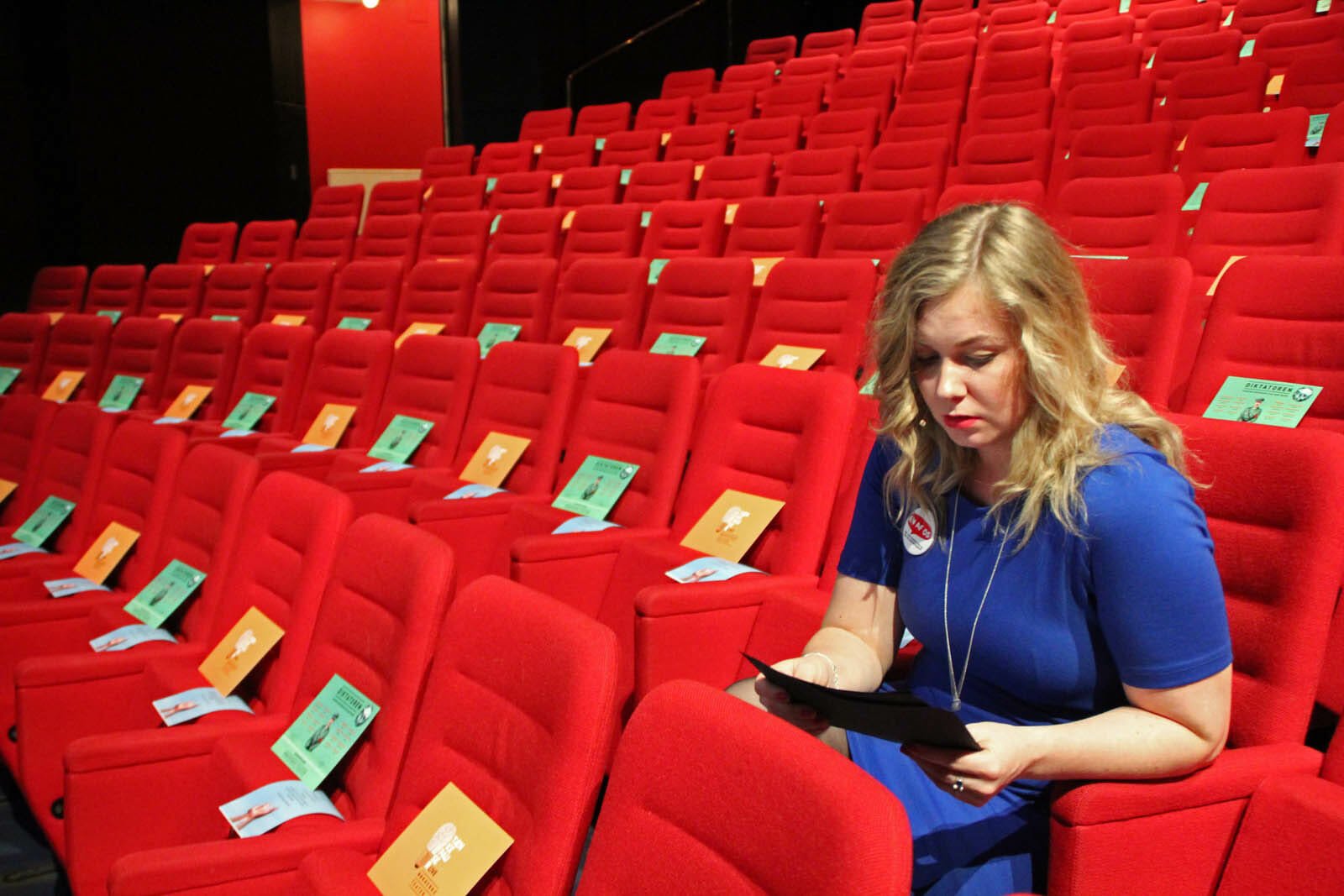 In June 2016, Christina was hospitalized with severe depression as a result of stress. On Wednesday, in her role as ambassador for the campaign 'One of us', she held a presentation about her experiences at Nørrebro Theatre.
image: Julie Thayssen Elming

Stress — It was tough to combine studies, a job search, and family life. But Christina just smiled, and took it all in her stride. At least on Instagram. Until one day she was lying down on the floor of the living room, under the table, unable to move.

This has been said by many during their student years, and Christina Sylvest-Noer, was no exception. On the contrary.

Thursday, 16th June 2016, and Christina is at home alone with her two children. She is a mother. She is a master’s degree student. And she’s tired. The month of May has been insane, with a husband in the hospital and a son with an inflammation in his ear. And this on top of the readings, the exams, the applications for student jobs, a marathon, and a thousand other things that she “just, just” needs to do. On the surface, things don’t seem too bad at all. On Instagram, Christina admits that it’s been tough, but she is digging deep and doing it with a smile. Because that is what you do. Right? But that Thursday, Christina can no longer keep up the pace. She shouts at her children and, in retrospect, does not even recognise herself. She puts them to bed and is suddenly overcome by anxiety. An anxiety that leads to thoughts of suicide. The stress symptoms have been there for a long time, but that day she snaps.

Christina convinces herself that suicide is not the way forward, and the next morning she gets up and pretends nothing has happened. In the morning, she acts normal in an acting performance that would give her an oscar. But as soon as the rest of the family is out of the door, the anxiety returns. After much consideration, she takes the phone and calls for help. She is inside the room. Down on the floor. Under the dining table. “That felt like the safest place at the time.”

Many students will probably recognise the symptoms that Christina experienced in the months up to that Thursday in June. Lack of sleep, an uncontrollable jumble of thoughts, a sense of inadequacy, a constantly recurring flu after a hard, but completed exam period. In fact, a total of 49 per cent of university students in 2017 responded that they had felt stressed or nervous within the last month.

But for Christina, the pressure ends up being too much, and she is admitted to the psychiatric hospital in Frederiksberg with a  diagnosis. She spends a total of eight weeks there before she is healthy enough to return to her family and studies. But it’s not easy to enter the lecture rooms again. She feels that she is outside the norms of how higher education students should feel. She has been mentally ill and she is afraid of what others would think about her.

With the way the world works today, when is it really that students have time off? You can simply take your computer and continue working.

Christina came back, and while it’s not always easy to be a student, she got help and support to get over her illness while she continued her studies. Today she is an ambassador for the campaign ‘One of us’ which works on breaking down the taboo on mental illness. This is why she on Wednesday 9th May gave a talk about her five-month long illness to other students at Nørrebros Theatre for the event ‘Cand. Stress’, meaning Master’s in Stress.

Most students know what it means to be busy. It may be up to the exams, or during other short periods during the semester, where there is extra pressure. And it’s all okay, says Freja Filine Petersen, who is a PhD student and doing research on the stress of young people. In fact, it is a natural reaction that dates back to the time we humans had to survive in a hostile natural environment. Our ancestors had to be ready to flee or attack if their path crossed a sabre tiger, bear or other animal that might like a small human for lunch. Here, man is given focus as the adrenaline levels increase and the senses are sharpened.

“Stress is a load that is okay for shorter periods of time. The problem arises when we do not recover,” says Freja Filine Petersen on this Wednesday evening at Nørrebros Teater where she, like Christina, is giving a presentation. 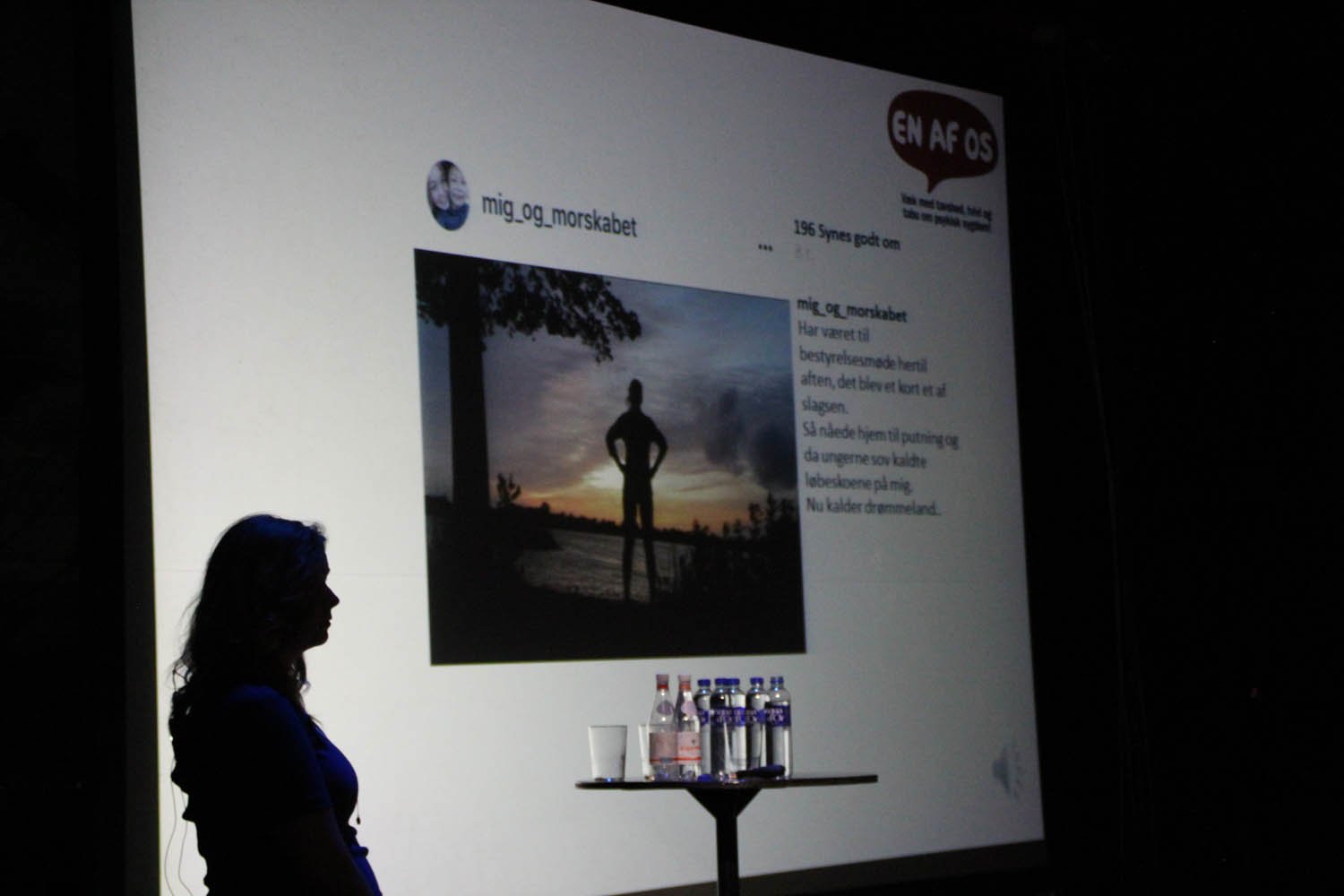 In her talk at Nørrebros Theatre, Christina showed old Instagram updates which - in retrospect - revealed her build-up of stress.
image: Julie Thayssen Elming

The problem for students today lies in the fact that the body does not know the difference between a sabre tiger and an exam. Stress is stress, and the reaction is the same. However, where the meeting with a sabre tiger was usually of short duration – either you were eaten or you got away – the pressure on students is persistent. “With the way the world works today, when is it really that students have time off? You can simply take your computer and continue working,” says Freja Filine Petersen.

She specifically categorizes mental stress as having three stages:

So busyness can develop into stress, which can then eventually develop into a stress disorder. “When you can’t get off this treadmill of tasks, it can lead to mental illness,” says Filine Petersen. And that was exactly what Christina went through on that day in June 2016.

3 things you can do to fight stress

Set up a weekly schedule where you put in time to read, go to lectures, work, take care of leisure activities and everything in between. Also make sure that there are one or two full days off during the course of the week. But most importantly: keep your own schedule!

Follow the 45/15 rule. Your brain works best for 45 minutes at a time, with a subsequent 15-minute break to recover. And while it may seem silly up to an exam, where you don’t have the time, the quality of your work will be better if you allow the brain to relax now and then.

Out the other side

It may seem hopeless when you have a mountain of tasks in front of you, but don’t have the resources to get them resolved. But Christina realised that the help was there when she first asked for it. She got hold of her student counsellor who helped her get sick leave, apply for a waiver from the study board, and a disability allowance. Christina was so sick that she had to give up her student job.

But you can also seek help before things go this far. Apart from the study programme’s own counselling, you can call the students’ counselling service, which has psychologists on board that specialise in helping students on higher education programmes. Or you can walk past the PsykInfos drop-in clinic at Kultorvet in Copenhagen.

Christina believes, however, that the most important thing you can do as a student is to listen to yourself and your own body. “I think it is so important that you, as a student, learn to be aware of yourself and your own limitations. And that you do not embed others’ needs, attitudes and norms into what you see as too much or not too much,” she says. “If something feels like it is too much, you have to react. There will be no-one giving a round of applause when you reach your goal and collapse from exhaustion. On the contrary.”

Christina has now recovered. And after talking for half an hour about all the challenges and emotions she went through in the course of her disease, the smiling – and pregnant – young woman could end her speech by saying, “today I have been free of depression for a year and a half. And nine days ago, I gave in my thesis. ‘

She just managed to reach the end of the sentence as the hall in Nørrebros Theatre broke out in whoops and spontaneous applause.