Medical students help each other out with their stress 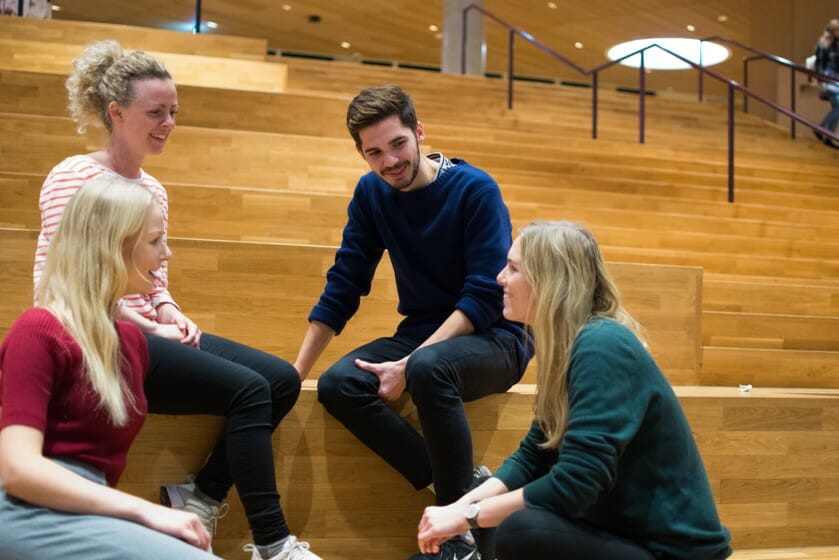 Medical students, the founders, a mentor and some users of the ‘breathing space'. From left: Freja Norman Vad, Elisabeth Meyer, Tobias Browall Krogh and Ditte Brunsgaard.
image: Sif B. Stormly

Volunteering — If the study environment is afflicted by a performance culture, then any changes should start with the students themselves, according to the students behind a club at the Faculty of Health and Medical Sciences.

by: Sif B. Stormly
Student journalist

Many students know the type. Always well-prepared, scoring top marks at university, and yet still having the energy for friends and family. The only problem: This person is pure fiction.

Instead of playing super hero and trying to live up to a fictitious ideal, students need to build up new communities that forge a team spirit, and that reduce the pressure to perform. From this, you will both become a better, and a more happy student.

This is according to medical student Ditte Brunsgaard, who was tired of the performance culture in the study environment at the Faculty, and chose to take the initiative to start a project that would actively contribute to a more positive culture.

First of all she got a group of her fellow students together, and together they have created the project Breathing Space for medical students. Its initiatives have included a successful mentoring scheme.

There are others, that just want to lie down and cry

Founder Ditte Brunsgaard, mentor Elisabeth Meyer, and the users of the ‘Breathing Space’ Freja Norman Vad and Tobias Browall Krogh sits and exchange experiences on a wide staircase for the University Post photographer.

Tobias Browall Krogh, medical student, has mad good use of the mentorship programme:

“Back when I volunteered, I needed a space where you could talk about the kind of things which you might not want to take up with your classmates. Where you could say: ‘I find these readings really hard. I almost want to lie down and cry over it’. I needed a forum where it was okay to let this kind of frustration out,” he says.

In the scheme, new students are affiliated with a mentor from a previous year cohort, who they can talk with openly and honestly. The starting point is that social, physical and mental well-being is crucial for a good student life. And that the fact that you are a medical student doesn’t have to be the only thing that you identify yourself with.

A voluntary, non-profit organisation run by students for students – with the focus on improving well-being, the study environment, the feeling of community, and the prevention of stress among students at the Faculty of Health and Medical Sciences.

Since the first information evening about the new mentor scheme back in 2016, a simple exercise has helped illustrate what the mentoring scheme is, and can be. The students had to write five words which describe their feelings in their role as student. Everyones’ lists were shared, and surprisingly the majority of them were completely identical.

“You have this idea, that you are alone, but you are not. This is something which reflects a wider trend in our society,” says Tobias Browall Krogh about the eye-opening experience.

Breaks down the illusion of the perfect student

The mentor scheme aims to break the taboos and reveal that ‘the perfect student’ is an illusion. As a bonus, the openness about the dark sides of student life have spread far beyond the boundaries of the mentor scheme. Most of the participants have become energised by learning that many of their fellow students suffer from the same problems.

I clearly remember when the 3rd semester began, how we started to take more care of each other, and to notice how other people feel.

Freja Norman Vad, who herself has used the mentor scheme, got the courage to take on some of the tabooed subjects with her fellow students. Before the conversations with her mentor, she was afraid that the others in her class would ‘perceive her as a fiasco,’ if she talked about what was difficult.

But when she started talking with classmates about topics that are normally avoided for fear of seeming like a slacker, the conversations have helped make for a more open sense of community among the whole team,” she explains:

“We now have a different, more relaxed, atmosphere, because we have become better at talking about student life, but also at doing things together that are not study-relevant, like. eating rice pudding at Christmas,” says Freja Norman Vad. The open conversations with fellow students have led to more and mores students signing up for the mentor scheme.

In addition to the breaking down of taboos, the scheme makes for more reflection, Tobias Browall Krogh adds with a smile:

“You become more aware about things. I clearly remember when the 3rd semester began, how we started to take more care of each other, and to notice how other people feel.”

Parallel to the mentor scheme, the medical students led by Ditte Brunsgaard have launched several other projects to improve study culture. The academics are the core part of the study programme, but a stronger sense of belonging and community requires that you are also together doing other things.

That is why the students, for example, organise an alcohol-free Thursday café with lots of board games, where anything academic is prohibited.

Two new projects are lined up for the spring. Theme nights with speakers on themes like, for example, motivation and time-orientation, are to give the medical students new tools for their daily life.

We have become better at talking about student life, but also at doing things together that are not study-related.

The first themed evening is scheduled for 21st March. The organisers will then consider how the themed evenings will develop further.

The second project is a physical silence room, where you can go and relax without talking. Here, academic books are strictly prohibited. The physical silence room is to function as a breathing space, where you can recharge in peace and quiet, and gather your thoughts. The administration has promised the students a room in the Panum complex, which they will receive in the course of the spring.

The mentor scheme has been such a success that some participants have had to wait for one whole semester to get a mentor. There are now more than 200 student members.

Part of the Breathing Space’s success is rooted in the fact that the projects are created by students for students, and that there is no layer of administration between them, says Elisabeth Meyer, who herself has taken on a mentor role:

“It’s the students that know what it is that you need as a student. So it is a lot about what the students want to do themselves, and this is its greatest strength.”

Freja Norman Vad and Tobias Browall Krogh agree. And they say that they, as a result of the mentor scheme, have been reminded of their original curiosity about the study programme, and that they have become better at listening to themselves.