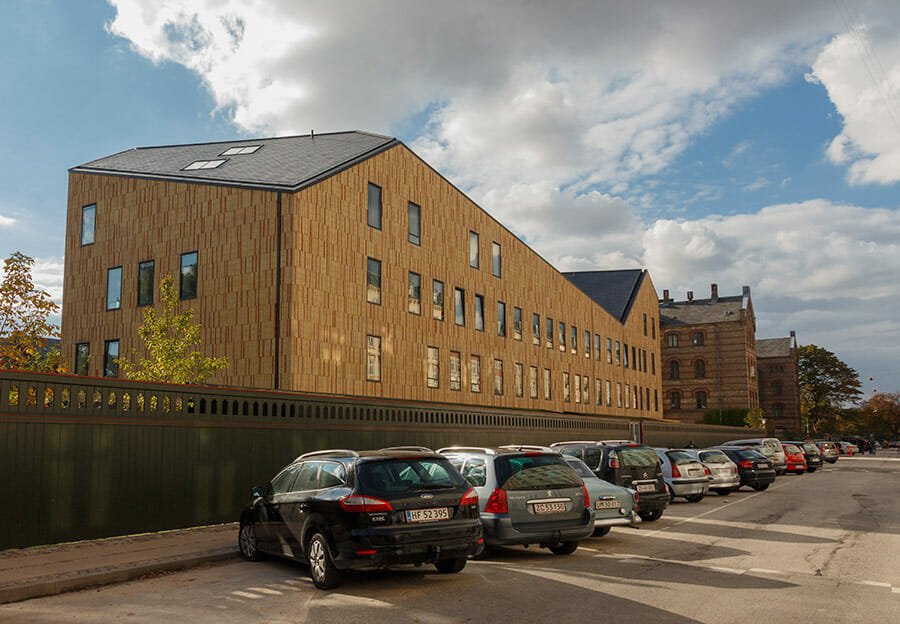 Department of Economics - Coming out of university, economists’ skills are one-sided, say critics. And they are therefore not able to solve the current challenges that face our society on issues like climate change.
image: ERIK arkitekter

Academic tradition — The movement Rethinking Economics believes that the Danish study programmes in economics are too one-sided. Now the debate has gone all the way up to the Danish parliament at Christiansborg, where Minister for Higher Education and Science Tommy Ahlers has been summoned to consultations on the issue.

Is the teaching on the country’s economics programmes too one-dimensional?

The movement Rethinking Economics, which was started outside this country in the wake of the financial crisis, has now also come to Denmark. Since then they have argued that the study of economics is characterised by habitual thinking: The assumption that individuals are motivated by utility, and that the market will move towards equilibrium by itself. The movement calls for an introduction to other perspectives, theories and methods, which the students can take with them when are to solve society’s problems in the future,

The three chairmen reiterated these points in a recent featured comment on the news site Finans.dk.

The criticism originally appeared at the universities, not least at the University of Copenhagen, where the group Kritiske Politter has been active since 2011. On Tuesday 26th February it reached the centre of Danish political power. Christian Poll, finance spokesperson for the Alternative Party, had summoned higher education and science minister Tommy Ahlers (V) for consultations in committee to consider the criticism from Rethinking Economics, which Poll mentioned several times.

»The dominant economic thinking cannot solve the huge problems we face. On the contrary, it has helped to foster these problems,« said Christian Poll.

He criticized the university teaching for focussing on »spreadsheets along the lines of the neo-liberal model« and claimed that there is a need to think along new economic lines during a looming climate crisis.

»The first step is to find out whether the universities have the best possible conditions to contribute to this,« he said and pointed out that Rethinking Economics does not believe this is the case.

In response Tommy Ahlers praised the debate in academia and that Rethinking Economics was actively »getting involved in their study programme«. But he also stressed that he does not want too micro-manage the programmes.

»This is up to the different academic communities. This is not something we should involves ourselves with politically,« he said.

You can’t bury your head in the sand

The chairman of Rethinking Economics, Mads Falkenfleth, studies economics at the University of Copenhagen, and he declares himself satisfied with the debate at the committee.

He says he does not want political interference in the academic milieu. But he does believe that there should be changes at the universities, because the intense focus on mainstream economic models – like those used by the Ministry of Finance – drown out other perspectives.

According to Mads Falkenfleth there are three pillars of mainstream economics: It takes the individual as its point of departure, and it sees both individuals, and companies as utility-maximising and profit-maximising. And it assumes that the market itself moves towards an optimal balance.

»We have only one tool in our toolbox. We do not receive teaching in other schools of thought. And we are not taught that there is no scientific evidence that what we are doing is better or closer to reality than other methods. They are just practical assumptions – and as employment and salaries are up, everything is fine,« he says.

Should you not introduce students to some basic concepts and assumptions before you let them juggle with alternative theories?

»Sociologists are not only taught social constructivism. And psychologists are not only taught Freud and Freudian psychoanalysis. If this was so, you would be told the same every time you went to a psychologist: »It’s your childhood!« »No, I just got divorced.« »Yes, well actually it’s your childhood!« »You can’t imagine this.«

This is what is happening in economics?

An important part of the food chain

David Dreyer Lassen, who is professor of economics at the University of Copenhagen, was mentioned a couple of times during the consultation. In December he said to the Information news site that the economics study programme could be better at introducing alternative theories and methods.

However he also believes that the mainstream takes up more space on the economics programme than on other programmes, simply because it is a broader subject area.

»There is not much time available on university studies, so we focus on the core of the economics programme. There are many things we do not manage to cover, but we give the students the tools to make their way in the world subsequently. So if you want new, specific, things in the study programme, you also have to say what it is that has to be deleted,« says David Dreyer Lassen.

There is a tendency to equate the science and the calculation models in the Ministry of Finance, and these are two relatively different things

According to the professor, the economics study programme has in recent years become better at incorporating knowledge from psychology, which adds nuances to the models’ simple assumptions about human behaviour. And he believes that the research still ends up becoming more empirical.

At the same time, he says that there is a lively academic debate at the UCPH Department of Economics. He believes therefore that part of the debate is rooted in poor communication.

»Perhaps we need to be better to illustrate that there is actually pluralism within the economics subject, so this is clearer to the politicians. Then we can avoid these very distorted images of the subject. There is a tendency to equate the science and the calculation models at the Ministry of Finance, and they are two relatively different things.«

But you educate precisely those students to navigate in the Ministry of Finance calculation models, and they are based on the mainstream economy assumptions?

»I understand what you mean. It is of course true that there is a demand for people who can navigate in the existing models or in the existing thinking. But a very important part of the communication of new knowledge goes through the students. All university studies try to update the syllabus to the latest articles and methods, and we do so too. It is therefore something that the students become acquainted with, and that they take with them to the Ministry of Finance. These things will not move from one day to the next, but we can see that this is happening slowly. And this ‘food chain’ is extremely important.«

During the consultation, the Alternative Party’s Christian Poll said that the debate about the country’s economics study programmes is particularly important in light of the climate crisis. And that this crisis is a sign that growth-oriented mainstream economics has failed.

»It will require a change of system to implement a green transition,« he said before asking the minister if he did not see that we during these years »have a special concern«.

David Dreyer Lassen recognises the challenge, but does not believe that the economics programme should put a significantly greater emphasis on, say, . He said that there is already high demand for the skills which the graduates of today come out with.

It is important that people are made aware that all theories have blind spots.

»Then I would prefer to set up new study programmes in climate and environmental economics. As important as the climate is, then we already have unemployment at virtually zero per cent, so it’s not as if we are walking around with available resources. And it is a very large topic to be incorporated into an existing study programme.«

But behind Poll’s criticism is also the premise that the growth-oriented mainstream economics that you teach is part of the problem?

»I don’t buy in to this premise. You cannot get an economist to say that you should focus on GDP as a target for society. What economists do is say: Given that we focus on GDP, what can we then do? If you from a political or ethical standpoint can reach agreement that you should focus on green national accounting – which we, by the way, are in the process of developing here at the department – then this is what we look at. And then you can adapt your analyses and policy recommendations for it. It is certainly not up to us to say what we should strive for.«

Tweaks rather than revolution

Mads Falkenfleth agrees with Christian Poll that mainstream economics cannot come to terms with climate change: “Our models are not geared towards changing the system,« he says.

That said, he doesn’t think there is a need for a radical transformation of the economics programme from one day to the next. And he does not believe that it is necessary to work intensively with each and every one of the nine economic schools of thought that he mentions.

He speaks instead of a series of »tweaks«. He refers, for example, to an open letter from a student of economics at Maastricht University, who proposes changing the way you teach money creation and financial markets. He suggests moving the theory of science classes from the sixth semester up to the start of the study programme. And he believes that some of the more historically oriented subjects, which today are optional, should be made mandatory.

»So I think you can do a lot of small tweaks, and that it is important that people are made aware that all theories have blind spots,« he says.

»But it is not enough to be made aware of your blind spots. I also think that, as a minimum, you should have an introduction to the other schools of thought in economics.«