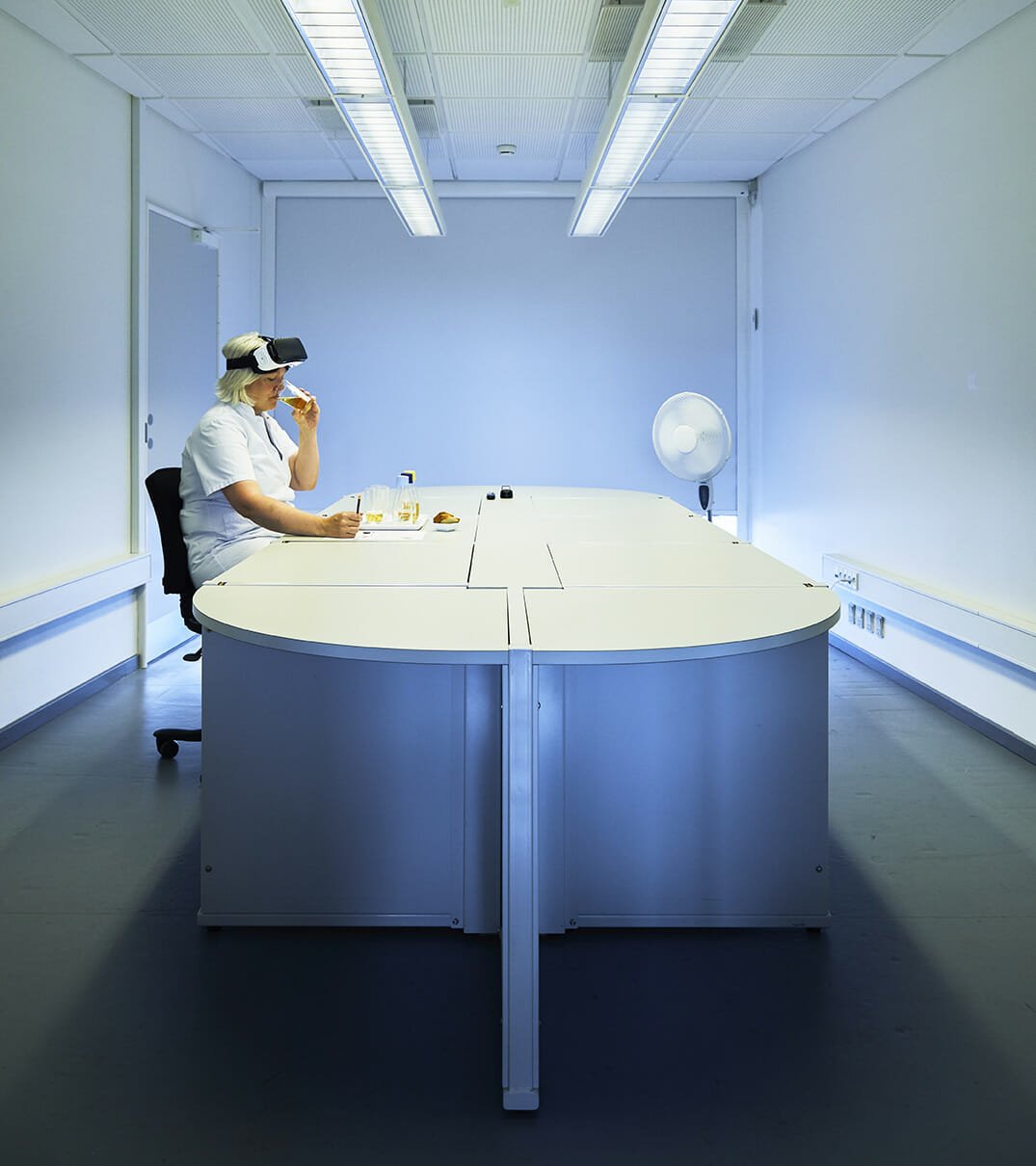 At first glance, it looks like something out of 2001: A Space Odyssey. But the lab is actually in a building on Rolighedsvej, in Frederiskberg, not in outer space.

Belinda Lange swirls the yellow liquid in a beaker, holds it up to her nose, breathes in, thinks a moment, then jots down a few notes on a sheet of paper in front of her. Lange is originally a chef, but nowadays she works as a professional taste-tester. Today, she’s tasting the beer for our sake, to give us an idea of how a real test works. Had it been an actual test, Lange would be running it, not doing the tasting.

Her job is to co-ordinate a panel of taste-testers for the SenseLab, which is run by the Department of Food Science’s Design and Consumer Behaviour section. Her work consists mostly of compiling data from the tests for departmental faculty, but she also runs tests for external clients.

Age: 46; Position: Co-ordinator at SenseLab, Design and Consumer Behaviour, Institute of Food Science (FOOD) since 2011; prior to earning a master’s in gastronomy and health in 2011 (now called food innovation and health), Lange worked for 10 years as a chef in Denmark and abroad.

In a real test, tasters could be asked to put on showing films that, in a beer taste test, for example, make it easier for tasters to imagine they are sitting at a bar or on a beach. Where you are influences how something tastes to you.

A little further down the corridor, the SenseLab has a room with what are known as sensory booths. This is where tasters sit during testing. Lange and her team can sit in another room and use equipment in the booths to monitor how tasters’ senses are affected during tests.

The temperature in the room is a constant 21°C. The lighting is adjustable, which is one of the ways testers use sight to influence how something tastes. Adding certain shades of green to the lighting, for example, can mask some tastes. Take apples. If you see a red one, your brain will assume it tastes one way. But if you see a green one, it’ll expect something different. The person conducting the test can alter the composition of the light in order to be able to register how the individual colours that make up the colour we see when we look at a food affect the way it tastes.

Many are recruited. Half are rejected

“One sort of thing we might test for is whether tasters can taste the difference between chickens that have been fed with grain and chickens that have roamed freely and eaten various herbs. In a recent test, we tested ice-cream made without milk. What we wanted to see there was how tasters responded to the texture,” Lange says.

People aren’t machines, but when we are carrying out a taste test, we almost need them to be

Planning a test can take anywhere from two months to a year, and involves things like recruiting tasters and preparing samples. Screening is carried out according to standardised ISO guidelines. More than half those screened are rejected.

“People aren’t machines,” Lange says, “but when we are carrying out a taste test, we almost need them to be. The data that we collect in Copenhagen today need to be useable to scientists in the US tomorrow and South Korea next week. The screening process gives us an idea of how sensitive they are to stimulus, as well as how well they describe what their senses register and understand what they experience when they taste something. After you get chosen you need to undergo a battery of sensory tests to make sure you are adequately trained.”

All tests are carried out at a standard temperature and take the same amount of time. This means that some tests require more effort than others. Lange recalls one recent test of freeze-dried coffee that had as many people helping prepare the coffee did tasting it, in order to make sure the coffee was served within a tenth of a degree of the right temperature. (Testers were also handed the coffee on a tray through a serving window to make sure they weren’t influenced by the way it was presented to them.)

Lange recruits her tasters from amongst students and the general population. The pay – 130 kroner an hour – isn’t great, so most people that take part do it because they find it interesting. Lange, though, makes sure that testers get free samples when the test is done.