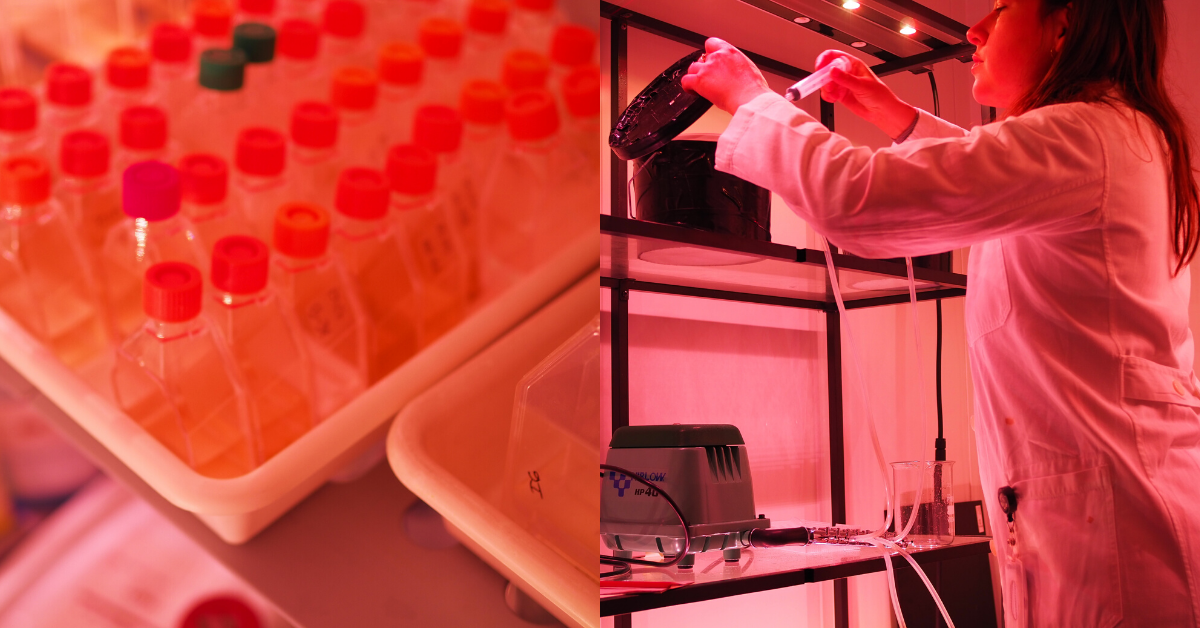 PhD student Anna Olesen feeds water fleas (daphnia). Photo taken with a self-timer. We met her for a chat on algae, work-life balance, and the positive side effects of the Covid-19 crisis.
image: Anna Olesen

Shutdown — As the pandemic lays waste to large parts of university life, the aquariums are still humming at the Natural History Museum of Denmark. PhD student Anna Olesen keeps the algae collection alive - and almost scared the life out of a security guard.

While students and staff await the slow reopening of university, nature has reopened with a flourish. In Folkets Park in the Nørrebro district in Copenhagen, the soft flute of a blackbird finds a tune while heavy flower buds weigh down thin branches of the trees. A bird sticks its pointed beak into the grass.

Here I meet my sister, Anna Olesen, who is a PhD student at a small algae collection at the Natural History Museum of Denmark which is part of the University of Copenhagen. My sister is the only PhD student in the section, which also includes an associate professor who is Anna’s PhD adviser, a couple of master’s thesis students, and one emeritus.

Around us, the trees are swaying against a wind that I had just fought against on my bike. Down in the park at ground level, it’s less combative. The wind prowls around Nørrebro-residents who have stood up to the risks of going outdoors these days and ventured out into the sun. Here everything looks normal, almost like a photo captured from the time before corona.

You can’t say that about the algae collection. Here Anna, as one of a select group of people, has been allowed to work in the lab a few hours a week in a museum that is deafeningly empty. She tells me about the algae, and how she works with a toxic diatom or algae group called Pseudo-nitzschia, which is found everywhere.

»In Denmark, it blooms in early spring,« she says, pushing her sunglasses up her forehead and continues: »You have to regularly shut down the harvesting of mussels due to various algae toxins. The algae toxins accumulate in the mussels as they filter the water and eat the algae.« 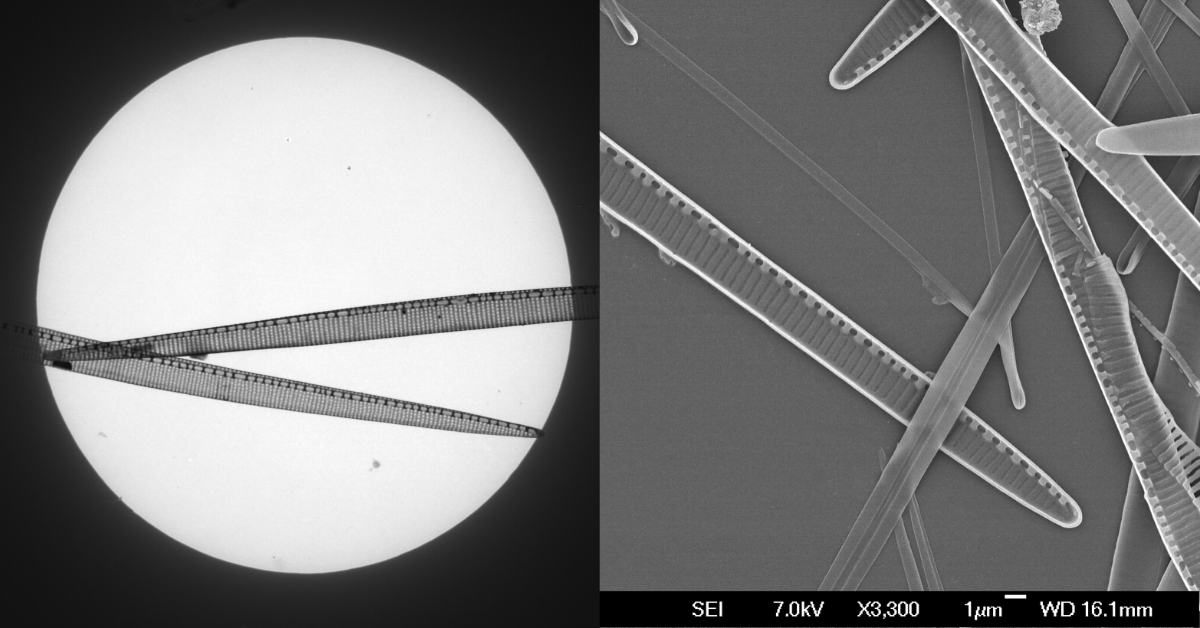 A toxic diatom (algae) called Pseudo-nitzschia photographed with an electron microscope that can enlarge 120,000 times. Anna Olesen uses the patterns, the details, to determine the algae species.
image: Anna Olesen

We sit in the park, distancing ourselves properly of course. It feels strange when you’ve grown up under the same roof. The recorder, which has been disinfected, she holds herself, so her voice can be heard through the background chatter of children in the playground and birds in spring. I ask her what it’s like in the lab right now.

READ ALSO: Overview: This is how Danish universities will reopen

»It’s a bit of a strange situation here during the shutdown. We have, for example, a lot of algae from Antarctica and this is a precious source of algae, because there aren’t always expeditions going there. And the algae change the longer they are in the lab.«

What does it mean for your experiments?

»The algae deform themselves. The project cannot be postponed for much longer, because then the algae are no longer representative of how they behave in nature. Because algae primarily divide and reproduce asexually, that is by cloning, they do not receive any new genetic material.«

She pauses, and I sense that she is concentrating on choosing the right words and pace so that I can keep up. I’m grateful, and I think of all the times she helped me with my maths homework. But it’s still only when I transcribe our conversation that I really understand what it is that she is telling me.

»The algae can’t correct mutations. The mutation rate is higher in cloning than in sexual reproduction. They should therefore be used while they are still reasonably fresh.«

So what now? Don’t the algae look after themselves?

»They don’t look after themselves at all. We have some recently established cultures from Denmark which require a lot of care because the new ones are vulnerable. That is what is going on in the lab right now. We are keeping our species alive. They need to have the water replaced, and I’m in there to do that.«

Are you doing that on your own?

»To keep the algae collection alive we are three of us that have access, but only under prior agreement with security guards and supervisors. We can’t just show up here. We can’t go to the offices. And we can’t get to most of the microscopes that are not in the immediate vicinity of the cultures.«

Prior to our meeting in the park, I asked Anna to take pictures of her work with a self-timer. The rules for who, and how many people, have access to the lab could not be budged.

»It’s completely empty in the lab. I was in there this morning and accidentally gave the guard the shock of his life. He jumped up, startled, when he saw me. Apart from this, it is completely dead, both in the office corridors and in the laboratories. In this way it’s very strange,« she says.

She does not yet have an overview of the consequences of the shutdown:

»We had big plans for some serious experimental set-ups with Norwegian water fleas that have been shelved. We got one hundred individuals from Trondheim in ten litre canisters, now inside containers with pipes and being fed algae. We just hope we can keep them alive until it all opens up again, because we’re not going to be able to get hold of them easily again.«

Get the weekly newsletter 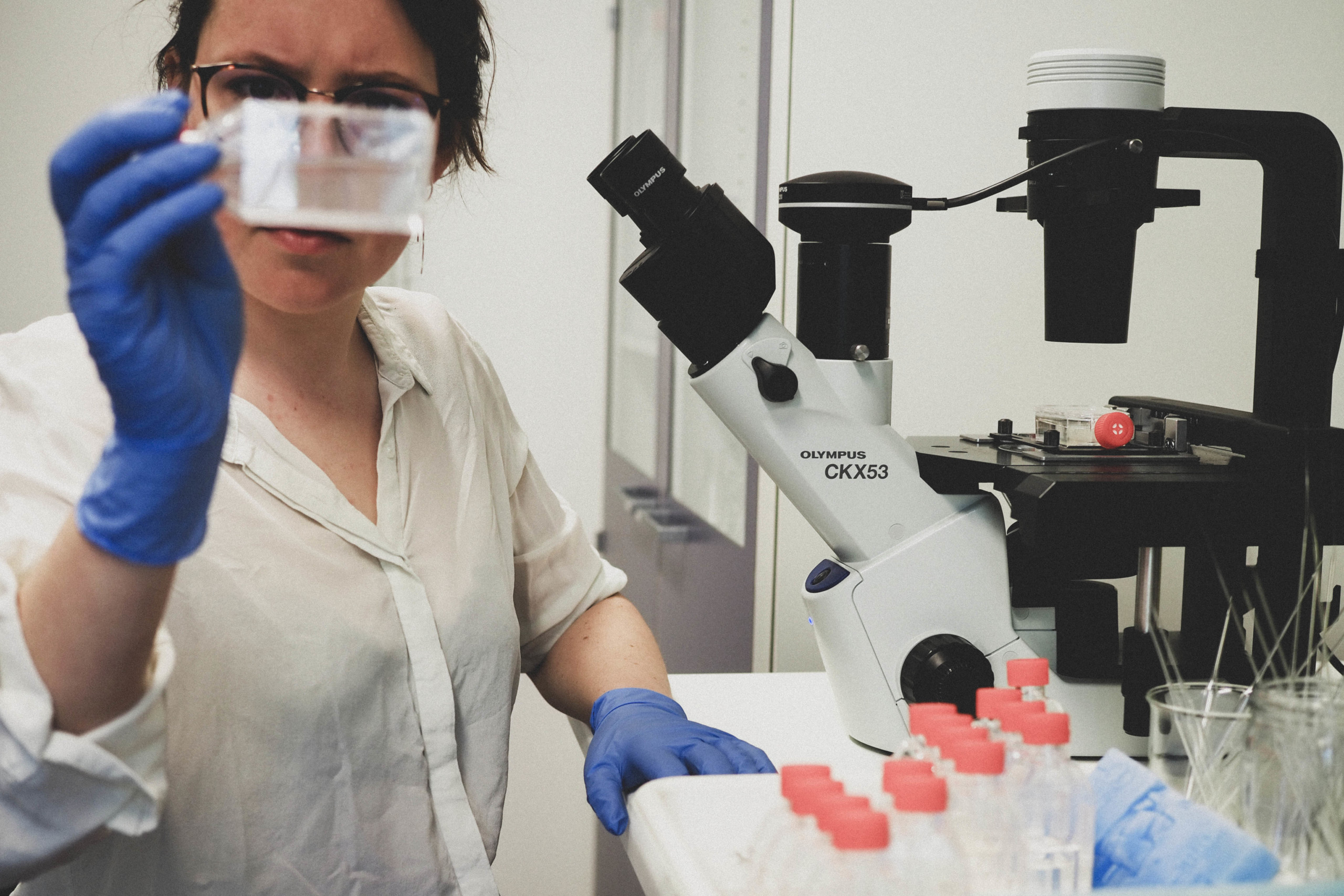 How have you been able to balance research and family life during the shutdown?

»Most of the work from home is about processing the material that we have collected. Either for articles or for analysis.« Anna glances at the time. Her boys, my two young nephews, are being looked after by grandma, and they soon have to be dropped off back home in Søborg.

During the shutdown, Anna has been looking after the children while the institutions were closed, because her husband is working full-time.

»It’s been challenging to do cool stuff for the kids without getting impatient with all the time that is taken from my own project,« she says. Because the clock counts down fast when you as a PhD or postdoc have a fixed-term contract. Anna hopes that her PhD will be able to be extended by the time she has not, actually, been able to work on her research during the shutdown. But she does not know yet.

Is there anything you wish had been handled differently?

»I feel as if I have been treated well. My supervisor prioritizes family, and she makes sure you don’t get carried away. But things are very different in different places. Some of the people I know have a completely different workload, where they have to juggle between children, full-time positions and a supervisor who has no understanding of their situation.«

She thinks a little bit and then says:

»Maybe I would have preferred that the foundations that fund our research projects all found some common solution. This could have reassured us.«

Do you think we will gain any new insights as a result of the crisis?

»I believe that the breaks often make us more creative in some ways. New space is being made for new thoughts. We also work on climate change, where the consequences can be extremely high in marine environments. It feels wildly hypocritical to have to fly around the world for meetings on climate change. The crisis has forced us onto other platforms, and that’s great. Now you can do it all from an office, a living room or a garden. In this way, working life has also become more family-friendly.«

My sister has a long bike ride ahead of her. She starts packing her things, but pauses when I ask her if it looks like the algae will end up being examined as planned.

»Yes, sure, we’ll make it. I think I’m OK productive, all things considered. There will be some of the hundred water fleas that don’t make it. But we have managed to think through the experiments more thoroughly now than we otherwise would have had time for. And in the future this probably won’t be a bad thing.«