New data: Denmark is stealing the best and brightest 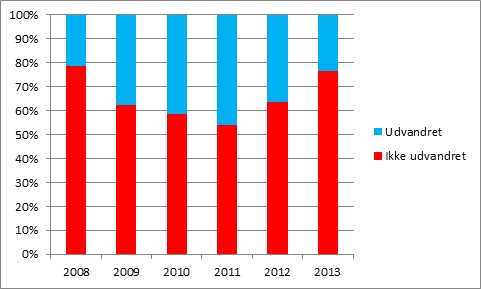 Three out of four international PhDs at the University of Copenhagen choose to pursue their careers in Denmark. And Danish PhDs are staying too

From a Danish taxpayer’s perspective, the numbers are almost too good to be true. Three out of four international PhDs at the University of Copenhagen are opting to stay in this country after finishing their research degree.

This is according to new data based on PhDs extracted from the Danish National Bureau of Statistics (DS). The data goes against a 2011 study by the Danish national audit office on all PhD’s in Denmark which seemed to imply the opposite.

The new UCPH data means that other nations’ taxpayers are paying for the best students’ education, while Denmark gets to reap all the benefits. The numbers thereby disprove a claim by some politicians that foreign students educate themselves here – and then leave, costing the taxpayer.

Other countries pay, Denmark gets the benefits

If there ever was a myth of international PhD students being a net cost to Danish society, the new data dispels it, according to Ditte Thøgersen of the UCPH Research and Innovation unit, who did the analysis.

“Our mobility analysis shows that this is not the case. In 2013, the last year in which we so far have data, 75 per cent of all foreign PhD students have stayed in Denmark the first year. In the period 2008-2012, 69 per cent of international students stayed,” she says.

“For international PhDs, their previous school and university training has been free of charge to the Danish taxpayer. So we are gaining 20 years of education for the price of only three years,” she says.

It is the first time there is solid data on Denmark’s international PhD graduates’ subsequent careers.

READ MORE: PhDs are not aware of private sector jobs
The data comes out at a time when the Danish government is already pushing for businesses to be better at employing international students at the master’s level.

Some Danish PhDs opt to migrate away from Denmark and get jobs abroad. But the UCPH data is good news for Denmark on this score also.

“The mobility among Danes is low, less than 10 per cent are opting to go away. And some of the Danish PhD’s who do go abroad after graduation return within a year,“ Ditte Thøgersen says, explaining that part of the reason is that “Danish PhDs are older, have families, and are at a stage in life where they are less mobile.”

“Some politicians like to voice a myth that international PhDs come here, make us invest in them, and then leave us. This we have disproved,” she says.

Novo gets 1/4 of all private sector PhDs

The international PhDs in the Danish labour market are distributed across sectors in much the same way as Danish PhDs. The one exception is within the field of Health and Medicine, with almost half of new graduates working in hospitals, partially due to their fallback option of taking a job as a medical doctor, something that may not be the same for international medical PhDs in Denmark without perfect Danish.

But apart from this variation “the labour market for international PhDs looks a lot like the labour market for Danes,” according to Ditte Thøgersen. A large proportion of all PhDs, Danish and International, get jobs in academia and public health. But 20 per cent of all international PhDs get jobs in the private sector, corresponding to the numbers for Danish PhDs.
As a point of interest, Denmark’s pharmaceutical flagship Novo Nordisk is the biggest private recipient of PhDs from the University of Copenhagen and takes up 23 per cent of all its graduating scientists employed in the private sector.

Only 8 per cent of Danish PhDs get jobs abroad

The most frequent country of origin among international University of Copenhagen PhDs is Germany, followed by China and Italy. The full table is in the fact box to the right.

Most international PhDs stay in Denmark. But when they do leave, the most popular destination is the USA, followed by the United Kingdom and Germany.