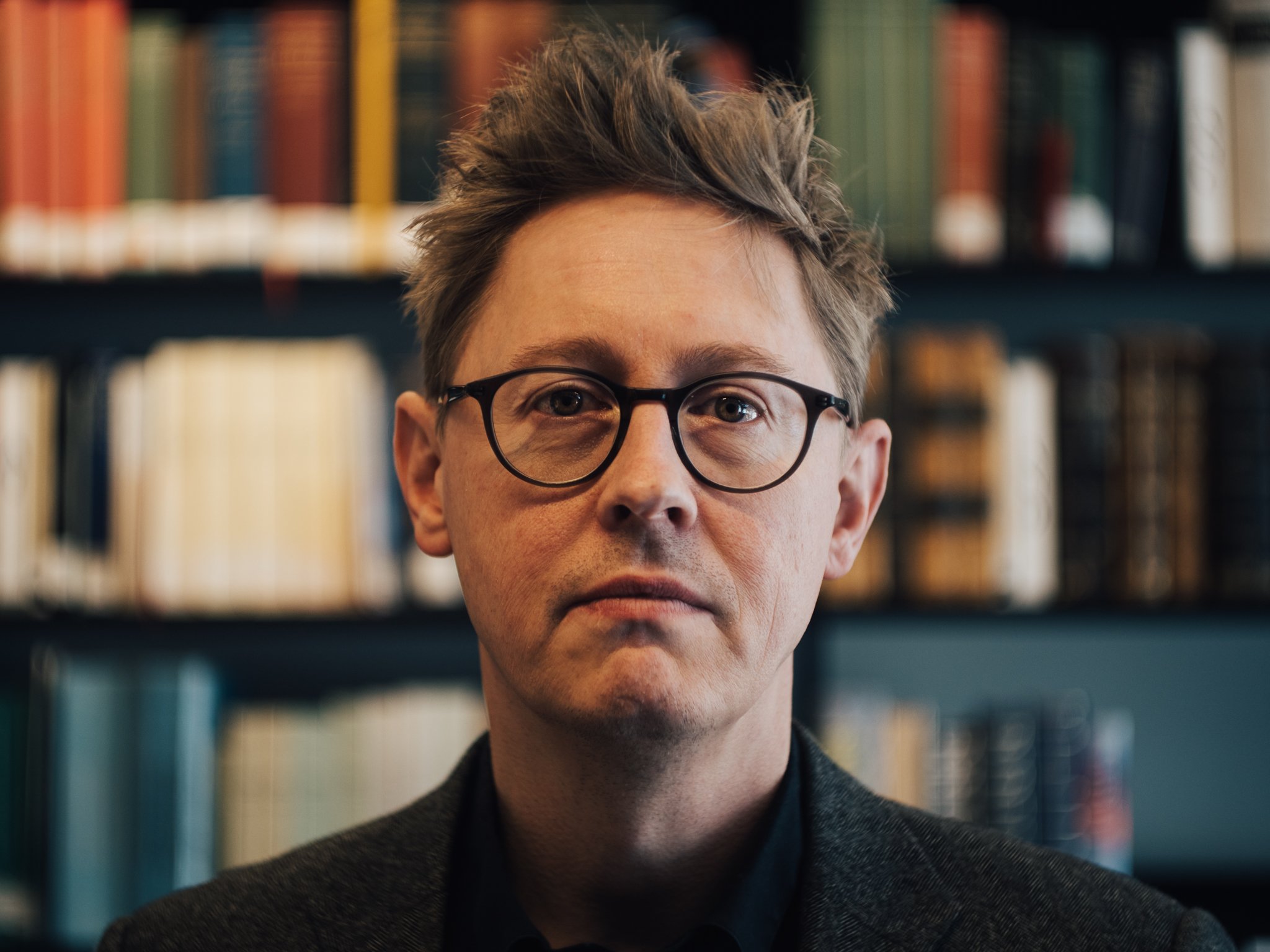 Thomas Hoffmann is in charge of the new study programme
image: Adam Ronan

A University of Copenhagen (UCPH) master's degree programme that was cut from the Faculty of Humanities has now been resurrected at the Faculty of Theology.

A new master’s degree programme has seen the light of day.

Sounds exactly the same, you might think. And you wouldn’t be completely wrong.

Thomas Hoffmann, a professor, and the man behind the new master’s degree programme, explains how the degree programme differs from its now-defunct source of inspiration, and why it makes sense to teach in Islam at the same venue as where we educate our theologians.

And about why he wants to avoid safe spaces and trigger warnings in the auditorium.

Thomas Hoffmann appears on the screen.

It is no coincidence that he is in charge of the new master’s degree programme. He has a degree in the study of religion at the University of Copenhagen, has specialised in Islam and Koran research – and has some clear ideas about what the degree programme in Islam has lacked so far.

ABOUT THE DEGREE PROGRAMME

Students fulfil admission requirements if they have bachelor’s degrees from the University of Copenhagen’s Theology, Humanities, Law or Social Sciences faculties.

Others may apply for admission.

The first class of the programme starts in September 2021.

»Religions – and human life in general – are relational. We exist and are defined in relation to each other, so it is not possible to study Islam as an isolated entity in the Middle East and the so-called Islamic world. We want to study Islam’s relationship to itself and to other religions, especially Judaism and Christianity,« he says.

This is where the ‘inter’ in interreligious Islam studies comes into the picture, he says.

Can you understand if people wonder why you study Islam at the highest level at the Faculty of Theology? This is the faculty where Christianity is the main focus.

»I understand, but I hope people will read more about our study programme and what we do at the Faculty of Theology. Then you will realise that we have had study programmes on Islam since the 2000s, that Theology will be the framework for the programme, and that we will draw on instructors from the entire university.«

The master’s degree programme in Islamic Studies used to be a part of the Department of Cross-Cultural and Regional Studies which includes other study programmes on the Middle East.

But when the Faculty of Humanities management gave the death penalty to this master’s programme, they offered their colleagues at their Faculty of Theology the ‘estate’ so they could set up a new study programme.

»We came to the conclusion that it was our civic duty to take it. UCPH cannot simply not have high-level Islamic studies,« says Thomas Hoffmann.

You want to study the conflicts that may arise when people meet up. Why do you want to do that on the basis of religion and not, for example, on the basis of culture, as they did on the old master’s programme?

»Culture and religion are, of course, linked together. Denmark is an extremely secularised country, so for an average Dane it might seem strange, but half of the world’s population are either Muslims or Christians. I strongly advocate that we do not throw the religious baby out with the bathwater, but take the phenomenon seriously and see it as something that can mobilise people in a way that we tend to forget in Denmark.«

The courses on the master’s degree programme will be based on a conflict and coexistence axis.

»We have the premise that people and society, including, of course, religions, are invariably characterised by conflicts,« says Thomas Hoffmann.

This may sound somewhat discouraging, but conflicts can actually also be a good thing, according to the professor.

This is really controversial material.

»Conflicts help sharpen groups’ identities. The reason why there is so much conflict between Islam, Judaism and Christianity is, of course, also due to all sorts of political circumstances, but it is also due to the fact that they have so much in common. That’s why they need to stand apart from each other and be themselves and their own. This is done constantly by means of discourses and polemics, and sometimes also territorially and through force of arms,« he says.

On the positive side there are, of course, all these cases where Christians, Jews and Muslims live good, peaceful and respectful lives side by side. We must not underestimate the capacity for consensus and collaboration, according to Thomas Hoffmann.

»These three religions are precisely an incredible interesting example of this,« he says with the enthusiasm of a researcher in his voice.

There is certainly enough conflict material to get going on.

»The Crusades would be a classic discussion topic, if we go back in time. In modern times, there are countless examples of conflicts on the basis of Islam – even in a Danish context. It can be about Islam and gender, the position of women, sexuality or circumcision. This is really controversial material,« says Thomas Hoffmann.

The students will learn how to discuss controversial topics in a nuanced and analytical manner.

»I think it is important that it is not just a debate that takes place in the public sphere. It should be allowed to create a stir. But if we can educate some people who are well-equipped to go beyond the one-sided submissions and understand the wider patterns, then we have come a long way.«

To press on the sore points

When discussing and studying controversial topics, it is important that you are able to speak freely, according to Thomas Hoffmann.

He wants therefore to set up a learning space where there is no hypothesis or problem that you cannot take up, because you are afraid of stepping on someones’ toes.

There will be no trigger warnings or safe spaces in this study programme.

In fact, he wants to go where you can apply pressure to the most delicate spots.

»To reformulate [Danish scholar, ed.] Georg Brandes, I would say that living research can only be recognised as such if it has problems up for discussion.«

Thomas Hoffmann himself has written many featured comments and columns on Islam and co-existence – including ones on the role of violence in Islam.

»Islam, Muslims, and the study of them, are extremely politicised and are fraught with violent and ideological efforts. It’s important that we try to say that we have this study of conflict and consensus, and now we’re going to go into this room and study them in a cool, critical, but also passionate, intellectual, and academic manner,« he says, adding:

»There will be no trigger warnings or safe spaces in this study programme.«

Precisely these two concepts, trigger warnings and safe spaces, have been part of the debate over the last couple of years’ on identity policy at the universities.

They have been imported from the United States, and – according to the critics of identity policy – conceal an exaggerated fear of taking on different topics. It is often a question of religion, race, culture or gender, that is, the things that help create people’s identity.

You say that you will be able to discuss everything in your auditorium. Have you experienced students or colleagues who avoided the discussion of controversial issues in order not to offend someone?

»I do not think I have experienced it specifically to the same degree in the classrooms as you would sometimes get the impression if you were just following the media. But I think that this does happen, and it will most likely continue to happen. So it’s a good thing to make this clear from the outset,« says Thomas Hoffmann. He adds that identity policy might, however, be more of a theme in humanities subjects.

Thomas Hoffmann hopes that a broad and diverse group of students will sign up for the degree programme. Then they can have some good discussions with a lot of input.

»We take identity and people’s experiences seriously. We are first and foremost a university, however, and we have to approach things analytically. If we, at the same time, have a diverse student body, then people can also sit and be different in the auditorium. And this will almost mean that the research and the study is acted out in practice in the auditorium. That’s certainly my hope.«