People are nicking the knives and forks on South Campus 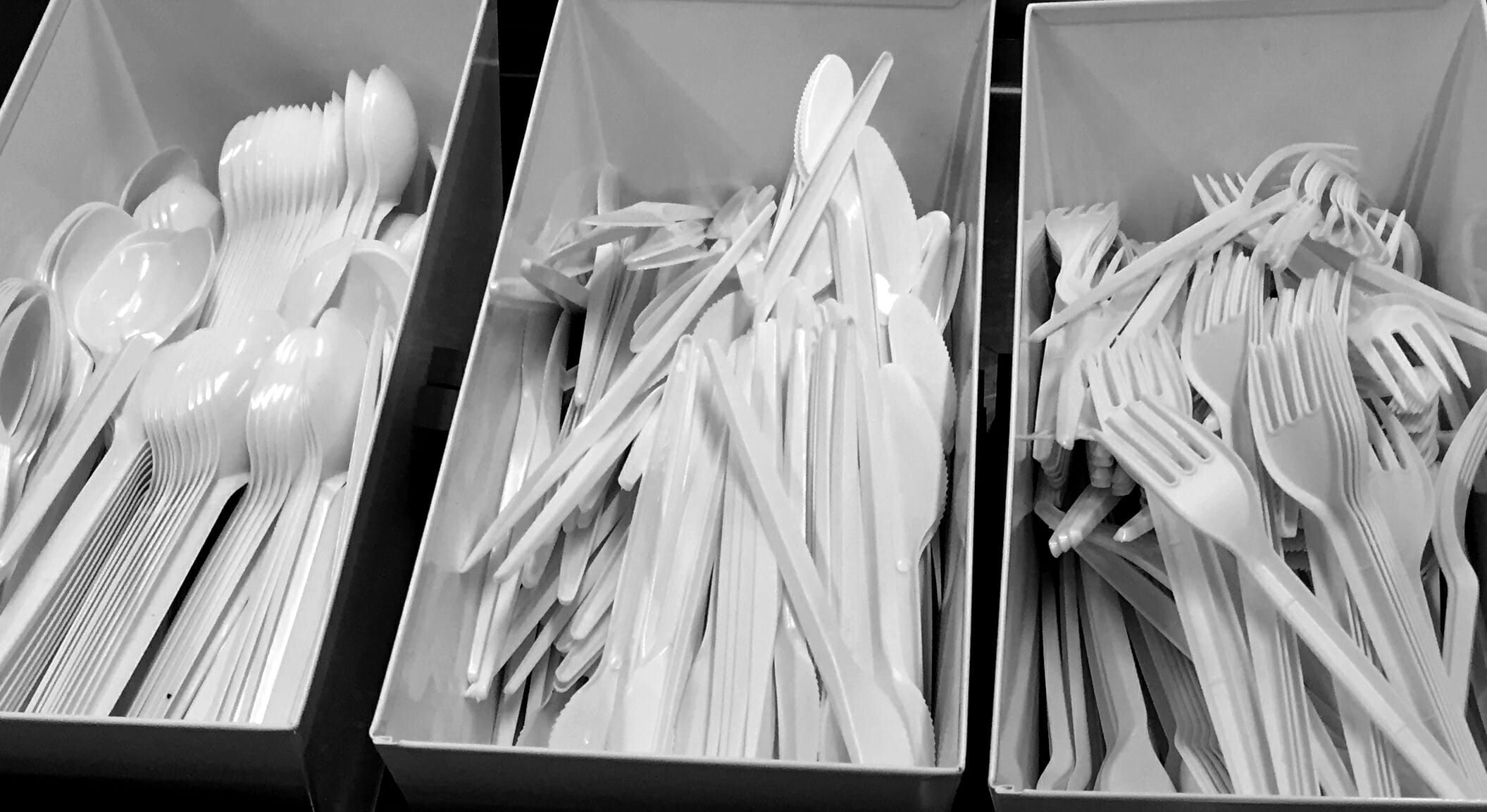 Plastic-fantastic - KUA cutlery is white as snow, but it is not pure innocence. And can the fork even penetrate a falafel?

University Post investigates — Humanities people, lawyers, and theologians are increasingly eating off plastic. One reader objects: Plastic cutlery is not a good idea from an environmental point of view.

»I cannot be sure when the change was, my guess is around a month ago but I have a very odd perception of time. The change-over is not necessarily something one picks up on since one expects it to be a temporary fix, and like a frog in gradually warming water, then gets accustomed to the change and with that habituation, stops noticing,« writes Hin-Yan Liu, associate professor of law at the University of Copenhagen in an e-mail, which, as the reader might have guessed, is about cutlery.

Specifically, the replacement on the University of Copenhagen’s South Campus of thee traditional metal cutlery with plastic knives, spoons and forks, that Hin-Yan Liu has become aware of.

Hin-Yan Liu writes that this shift in cutlery is an unacceptable development at a university that strives for sustainability. And that, apart from this, it is unnecessary, as the metal cutlery worked fine. And it is thoughtless, because meals with plastic cutlery create waste that we risk having to live with until the sun burns out, he writes.

The reign of the white cutlery on South Campus

»I am assuming that this is some thoughtless move, but I think it is something that deserves some limelight,« writes Hin-Yan Liu.

The University Post is keen to focus on the things that our readers are interested in, including the cutlery at the University of Copenhagen’s faculties on Amager.

A walk on South Campus reveals that, well yes, here you eat lunch with plastic cutlery.

If it is students that are stealing the cutlery, thereby replacing the cutlery that they otherwise would have bought themselves, this is not in itself an environmental problem.

However this is not some revolution, where all the metal has been scrapped … In the theologians’ and law scholars’ buildings (KUA 3) one finds both metal knives and forks on the carts for collecting the dishes that are set up in the building’s canteen area. And in a lounge-like area in the southwest of the complex there are specimens of both plastic and metal cutlery.

But in the big central inner courtyard of South Campus, where there is both a coffee shop and a cafeteria with healthy, plant-based food called Wicked Rabbit, the theme is plastic fantastic.

Here, white disposable cutlery reigns supreme. Apart from a basket with some butter knives, every clearly visible piece of cutlery is plastic.

If you ask the experts, there is no doubt that plastic cutlery is a problematic solution to the problem of eating nicely.

Anders Damgaard, senior scientist at DTU Environment, specialises in analysing environmental impacts. He says he does not know of any analysis that compares plastic cutlery compared with alternative types of cutlery that specifically includes Danish conditions. But producing a lifecycle analysis of various kinds of cutlery is a relatively easy task.

His presumption is that a piece of metal cutlery will, in the long run, be the environmentally correct choice.

»A metal knife is more costly to produce than a plastic one, because it includes digging and reprocessing iron ore, but the initial investment will quickly gain a return in a café where the metal knife is reused and presumably washed in an industrial dishwasher.«

While the University Post looks on, plastic forks and spoons are taken from the Wicked Rabbit’s cutlery drawer to their short, last journey towards the planet’s mountain of garbage.

»I guess that the reason why they are moving to plastic cutlery is pilfering. But if it is students that are stealing the cutlery, thereby replacing the cutlery that they otherwise would have bought themselves, this is not, in itself, an environmental problem.

At South Campus at the University of Copenhagen, many café guests throw their lunch packaging, including plastic cutlery, into a bunch of garbage stands with black bags in them. This means that the used knives and forks are part of the so-called residual waste, which is typically burned off in Denmark.

However, although the burning off of waste in power plants can have a positive climate impact, provided that there is capacity to burn it in the power stations, and provided that these power plants have good utilisation of this energy, this does not apply to the burn off of plastic. This is a net contributor to the CO2 footprint.

The coffee cups should have alarms on them

But if plastic is bad, why is it at Denmark’s most prestigious university?

As so often before, it is the vices of us humans that is the basic problem. More specifically, as Anders Damgaard from DTU hinted, it is about the kind of lousy theft that is called wastage if you don’t want to point an accusing finger at anyone in particular.

The café employee at the Wicked Rabbit cashier does not want to be named, as she is on part-time. But she says that plastic cutlery was gradually introduced because the canteen loses too much of its metal cutlery. People don’t bring it back to us, she says. The problem seems to apply to both students and employees, who may leave it in the coffee kitchens around the different office floors.

The employee at the cashier informs us that the Wicked Rabbit loses 4,000 white coffee cups a year and a good deal of latte-glasses. In fact, it happens that people nick their own supply of the café’s plastic cutlery from the baskets, even though they don’t even buy food, she says.

Even the plastic cutlery is pilfered at South Campus.

The extent of the pilfering says something about the volume going through the location. There are a lot of lunch guests here. While the University Post looks on, one after another small, moulded, plastic forks and spoons are taken from the Wicked Rabbit’s cutlery drawer to their short, last journey towards the planet’s mountain of garbage, or garbage pyre.

Many choose plastic, even though metal is available.

But what do people say in the café area – the front line of cutlery, if you will?

A lunch guest in the café lounge, who presents himself as an employee of the campus library, has taken a plastic fork for his lunch, a box with something in it that looks like Thai food. He says that he usually takes one, because he sometimes eats outside the building, and then he doesn’t have to deliver his cutlery back.

In other words, it has always been possible to choose plastic cutlery in the café area.

The man from the library says he has not thought deeply about the cutlery conditions on campus. But maybe they should make a special collection of plastic cutlery, he suggests.

At another table there are four young guys, three of whom are in the process of eating lunch with plastic cutlery. One of them had noticed that metal forks were no longer available in the Wicked Rabbit, he says.

»I used to use the plastic cutlery,« says one of the others.

They say that it is understandable if the café switched to plastic due to pilferage. One of them says that he himself once took a metal fork home in his bag.

»The only problem is that the fork breaks when you eat falafel,« the third guy at the table comments while he tries to poke through the crust of a seemingly hard-baked chickpea bun.

A group of female students at a different table say that they also used to take the plastic cutlery. They have not, before being reminded of it, noticed the phasing out of ordinary metal cutlery. They have noticed on the other hand that plastic knives and forks tend to shatter when trying to handle food with them.

Plastic cutlery might not be suitable at all for the kind of healthy food that the Wicked Rabbit purveys.

None of the individuals The University Post met, commented on their own motion the possible negative environmental impact of the cutlery. Cutlery might not just be top of mind for a lot of people?

It is, however, at Fazer Food Services, which runs the Wicked Rabbit and the other cafeteria services at South Campus.

»We have full focus on this and have also placed an order for cutlery for the university, as we know this is a problem,« site manager Laila Bjerregaard writes in an email.

»I hope this will be resolved soon.«